Writer/director James Gunn’s new “The Suicide Squad” spinoff “Peacemaker” successfully debuted on HBO Max last month, famously introducing yet another of the filmmaker’s iconic, buzz-worthy, music-driven title sequences. In this latest pairing with the creatives and producers from one-stop cross-media production company Sarofsky, star John Cena’s Peacemaker character performs a show-stopping dance number with his co-stars, colorfully setting the stage for the epic and the unexpected. 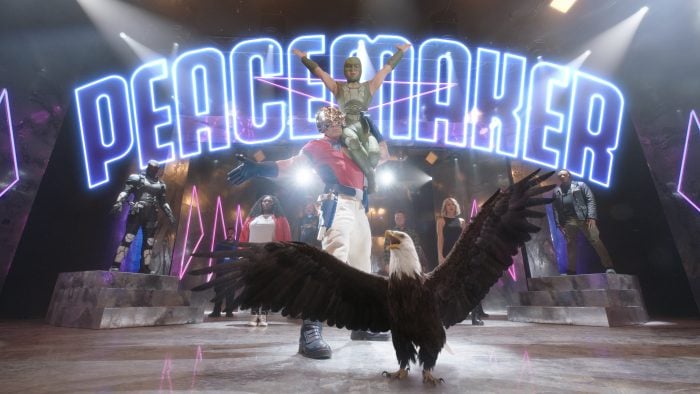 Led by Executive Creative Director Erin Sarofsky, Creative Lead Duarte Elvas, and Managing Director/Executive Producer Steven Anderson, Sarofsky also created custom titles, typography, and visual effects for “The Suicide Squad,” and for both “Guardians of the Galaxy” volumes. Referring to the illustrious director who has become such a frequent collaborator, Sarofsky explained, “We love collaborating with James. He is so unique and has a real vision… and we feel lucky to be on the same creative page with him so often. There is a trust and a shorthand built up at this point, that we don’t take for granted.”

For the highly acclaimed Max Original series exploring the origins of a vainglorious man dedicated to peace at any cost, Gunn conceived and filmed a choreographed dance routine with the entire cast, set to the glam metal track “Do You Wanna Taste It” by Norwegian band Wig Wam. With the music as inspiration, the designers homed in on a typographic treatment to nail the series’ bad-ass aesthetic.

“Duarte was an All-Star on this,” Sarofsky confirmed. “He got to be very hands-on, and it shows with the precision and type mastery.”

“A lot of typography from that genre, while stunning visually, is nearly illegible,” Elvas said. “As title designers, legibility is essential. When we discovered New Zelek, we were able to typeset it to do the job perfectly! It has the angular, geometric feel we were looking for, and the letterforms are clear and familiar enough that one can read the words effortlessly.”

“We also created a really cool treatment with a glowing outline,” Sarofsky added. “That look was painstakingly explored to match the set design and genre, and heighten legibility. It all looks so intentional and just as it should be, and that’s because of the hours put into making it just so.” 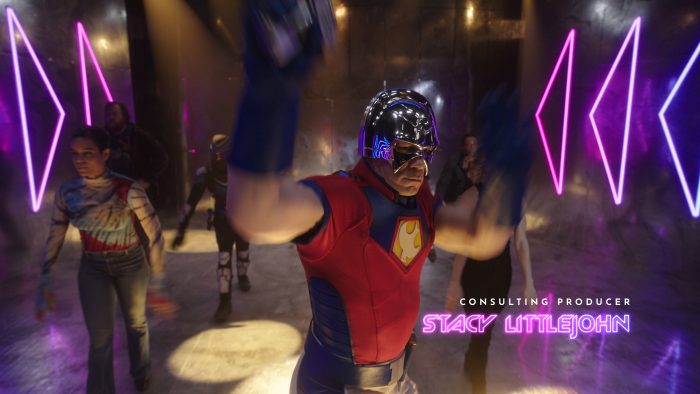 To complement the bold statements made by New Zelek in neon, Josefin Sans is used in white for all secondary typography. Also worth noting, discriminating viewers will notice several moments in the dance sequence where the designers introduced subtle interactions between dancers and type.

As with Gunn’s other superhero action features, Sarofsky once again created custom title cards. For “Peacemaker,” this includes “previously on” and episode title cards to be used throughout the season.

For this project, we developed some alternate approaches that we loved, that did not make the final,” Anderson concluded. “It’s yet another time where we are left wishing they could have used everything.” 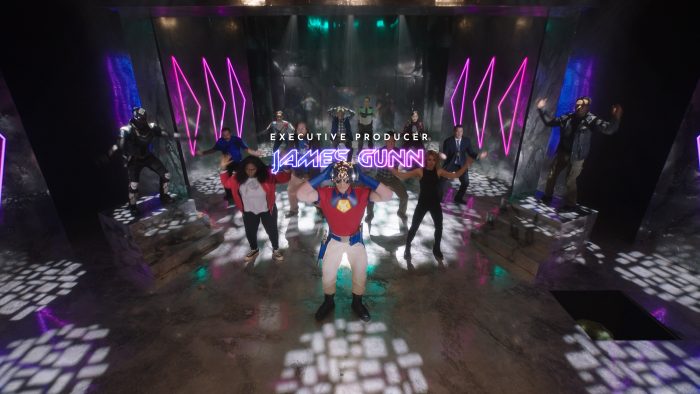 About Sarofsky
Director, creative director, and designer Erin Sarofsky kick-started Sarofsky in 2009 and formed a group of extraordinarily talented makers who have been providing their services to leaders in the advertising and entertainment industries worldwide. Today, Sarofsky’s makers use animation, visual effects, motion design and live-action to collaborate with customers from concept to delivery, producing work that is visceral, innovative and diverse. With artistry that encapsulates in-house long format, sublime commercials, brand films, title sequences and much more, Sarofsky’s reputation for breakthrough design, its proven multi-media production expertise, and its fabulous Olson Kundig-designed studio in Chicago’s West Loop all constitute key components of the attraction. Learn more at https://www.sarofsky.com.