While many commercial animation shops dream of developing feature length films — and building valuable intellectual property in the process — very few actually get started on the long, circuitous journey to that goal.

Over the last few years, New York-based PandaPanther has crafted over two hours of cinematics for the Skylanders video game franchise, a Herculean feat that gave them the experience — and confidence — to take on longer form storytelling.

Their short film, “Lostopolis,” is a slice of a full length animated film the studio is working hard on making a reality.Charmed by the film’s narrative premise and its blend of live action sets with CG animation, we interviewed PandaPanther, digging into the creative process and long term goals fueling the project.

I’m kind of embarrassed to admit this, but I didn’t realize when watching “Lostopolis” the first time that the sets were physical. How much of the short is in-camera?

All the backgrounds are sets except the last scenes in the dark void.

How did you guys decide on the blended approach?

Some of our first projects at PandaPanther were experiments with mixed up sets and CG, so the short film really had to look and feel like an evolution that.

The blended approach makes being at work a magical experience, completely surrounded by sets and mysterious lights while controlling a MoCo (motion control) robot — it’s like playing with toys in imagination land. We get to be like kids at work. 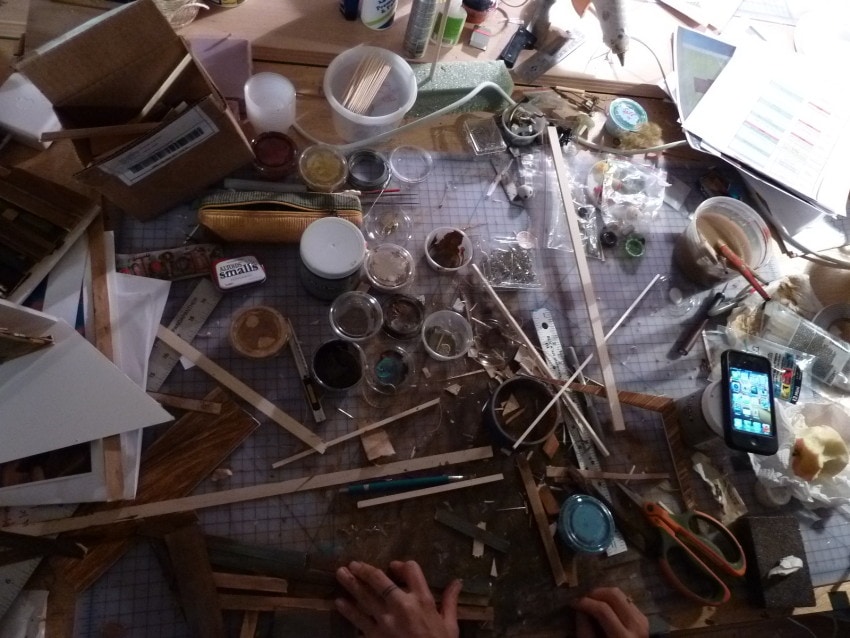 Working on the physical shoot is really exciting because it’s like a show we’ve been preparing for. Time is limited, and it has to work! You get to finally see if all the planning and previs paid off. Things don’t always come out as planned and that’s what keeps it fun.

What challenges came with working with miniatures?

This list could get long, but the biggest challenge without a doubt was staying on schedule. By the end of the shoot, we were like a crew in a submarine who’d gone on a long journey together. We were shooting in our basement with no natural light. The studio lights got hot, and it was hard to get a sense of time. 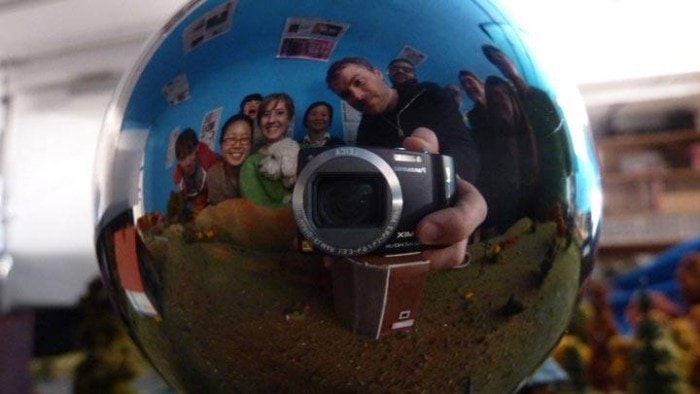 A selfie with the “submarine” crew

Do you guys own your own MoCo rig?

Yeah, we purchased a motion control rig back at the end of 2011, with the intent of using it on our own productions and learning how to operate it ourselves. 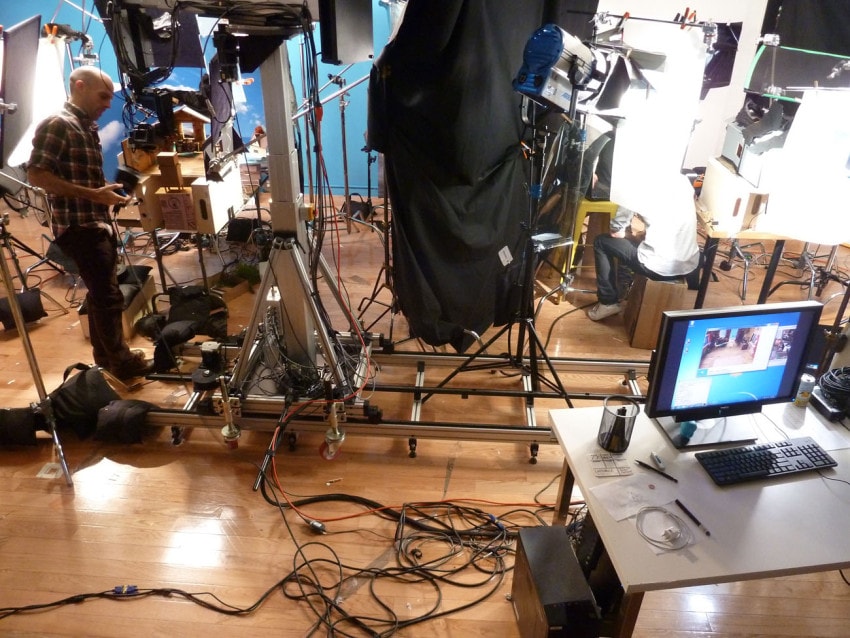 When it comes to tight deadlines, we still like to rely on operators who do it every day and really understand how to get everything to behave correctly.

Working with motion controlled camera rigs is difficult stuff. Were there any technical challenges related to that?

At one point, our MoCo made a strange noise and stopped.  Luckily, our MoCo operator Hans saved the day by managing to flip the half-ton beast (with the help of everyone) and  replacing a gear or something underneath it while talking to the MoCo company on Skype. It was very intense, and we all celebrated when it worked again. 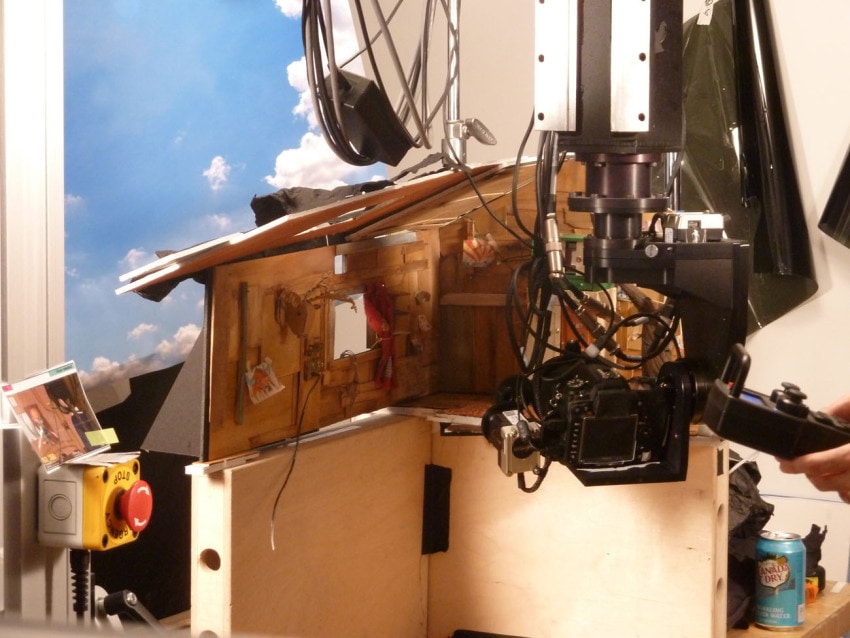 “We often had to remove the floors of the treehouse set due to all the low angles with Roboto.”

We often had to remove the floors of the treehouse set due to all the low angles with Roboto [the co-star of the film].  That became a major hurdle for traveling shots, and the floor had to be taken apart in sections. We would pause the camera move, remove some floor pieces and then keep moving.

It was definitely a delicate situation where nothing could be bumped. No one was allowed to breathe during these times.

The list goes on. There was usually some kind of hiccup. Some hiccups remain in picture. We just choose to blink at those moments.

This short is a segment from a full-length feature that’s in development, right? How deep into development are you?

The short is essentially a few pages from the full script, which is still in development. We decided on the tree house scene because we would be able to focus on a single environment, and the story within that section had a good self-contained arc. 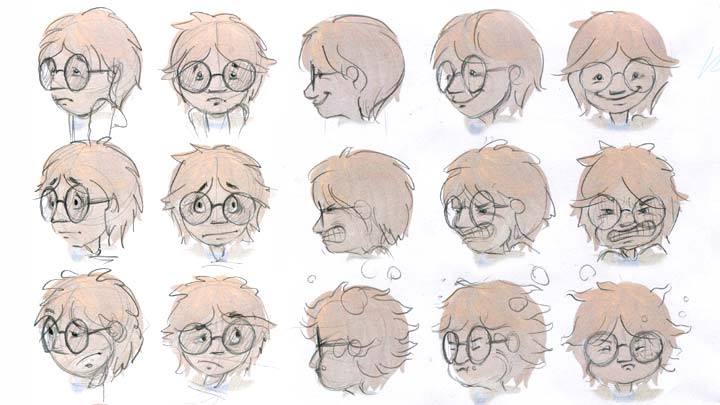 We’ve been developing other scenes as well and are working on the script at the same time. So some things are changing as we go.

Do you have any other studio or distribution interest at this time, or are you going it alone for now?

We are going it alone and have been producing/funding independently. We’ve been trying to stir up interest in the ways that we know and knocking on doors, but nothing solid has materialized yet.

In a way, that’s good because we still have full control over what we want to do with it. We’re hoping to get the full movie made one way or another. 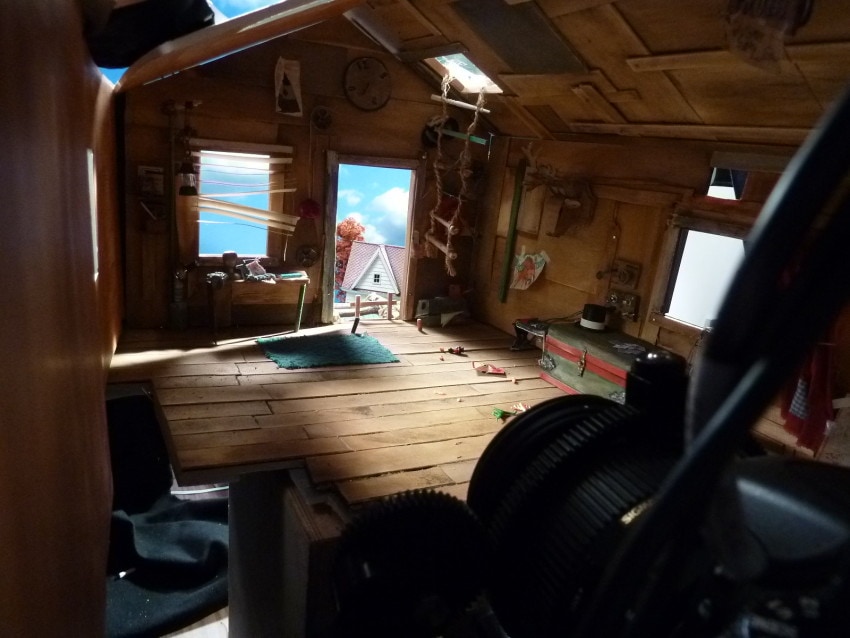 What would be the ideal outcome for this whole thing? Big theatrical release? Solid run on the festival circuit?

A big theatrical release is a big dream. The story is unique and deep enough for it. Obviously, we’d love for it to come out in a big, theatrical way.

There’s so many other ways to get movies seen these days with online streaming content sites. We just need to get it in front of the right people.

Developing your own intellectual property is a big undertaking, but the upside can be huge. Are you guys hoping that you can start building up your IP development chops to balance out the work-for-hire revenue that currently pays the bills?

Absolutely. Probably the most important thing to do as an animation studio, beyond surviving, is creating something of your own.

Whether that is just a small idea (which can become big),  or a big feature project, just keeping a revolving stream of ideas going is important. We’re currently developing lots of concept books, some for TV and other longer stories, while keeping up with incoming jobs.

Hopefully, our own IP will some day become the “work-for-hire.”

Why would a studio undertake a feature film project?

I think it has to do with how much you want it. It doesn’t make sense financially, but It allows you to focus and build something into a bigger and greater idea, eventually superseding anything you could have imagined at the outset.

Ultimately, that idea might fail. But who cares, right? Isn’t that better than not trying at all? We are given the ability to create, so we can use that — or sit back and watch other people do it for us.

Nearly every shop I know with a penchant for character animation has toyed with the idea of developing a feature. Very very few have gotten far. Why do you think that is? What are the challenges that make it so difficult?

Because it’s impossible — or uh, “challenging” in many ways. It can get expensive, especially when you don’t have a real deadline. It can be difficult to gauge how good your own ideas and creations are until you finally have a chance to step back and look at something. Even then, it’s pretty hard to tell — and by then, it has cost you some serious time. 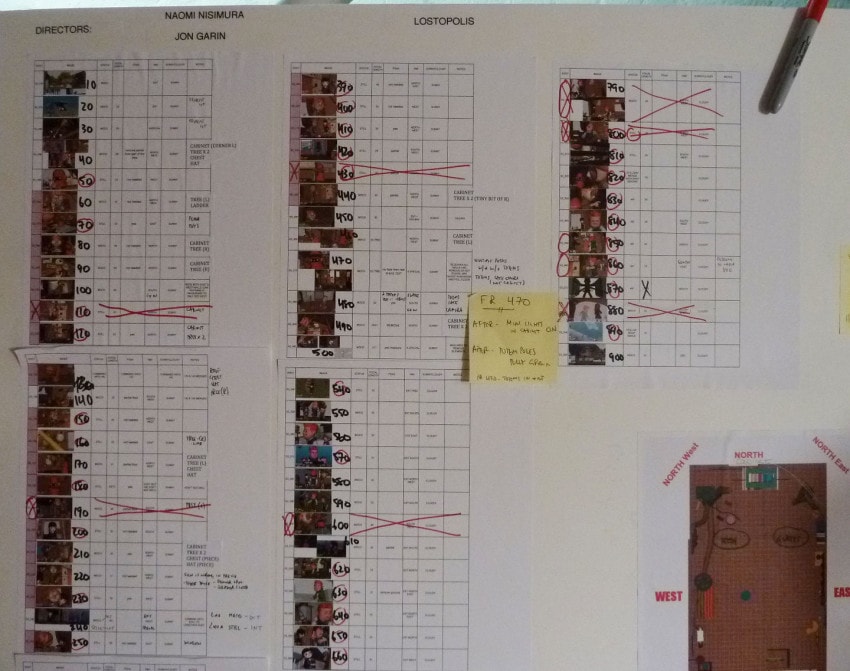 So we tell ourselves not to doubt too much. Otherwise, things just get stuck and never finished. We just keep pushing, and something awesome usually happens. There’s plenty of time for doubt after you finish.

Does PandaPanther have the production capacity to produce a feature-length film on its own? Would you partner for that?

That’s something we are setting out to prove with the segment, which we produced without any outside help.  We can make this movie! If money was no object, the film would already be made.

It really comes down to having a budget to work with to hire the right people and have them stay in one place long enough. The greatest thing about being in New York City is there are so many amazingly talented people that live and work here.

We would definitely consider partnering up with a studio if a deal was contingent on it.  Having a feature under your belt already is something investors really look out for in partnering with a studio — not just a cool idea, but experience. So that is a very likely scenario.