Al Jazeera Media Network wins “Telly Company of the Year” for second year in a row.

Founded in 1979 to honor commercials made for cable and local TV, The Telly Awards has continually refreshed its categories to honor the evolving, broad range of work being made — including branded content, social video and animation — working with industry experts to identify categories where new platforms play an increasingly important role in how stories are being told. In recognition of the industry’s continuing evolution, The Telly Awards reinforced its commitment to showcasing the many outstanding ways video is being used in this ever-changing landscape by introducing a suite of new categories, including Workplace Culture, Hybrid Events, Education & Training, Recruitment and Sustainability.

“The workforce has changed so much. New companies have come out of this time, others have shifted their offerings and employees are also looking for new ways of working — and video is being utilized more than ever to address these shifts,” explains Tellys Executive Director Sabrina Dridje. “The culture of a company has never been so critical to attract and retain talent — whether it’s new ways of remote working, placing purpose at the center of a businesses key values or providing Employee Resource Groups for communities to gather and support each internally. This year’s incredible group of winners perfectly exemplifies the many artful and unique ways video is being used to tackle these timely topics. By introducing our new categories, we’re continuing to deliver on our mission of constantly evolving with the changing industry and the world.”

Among the winners in the new categories, Johns Hopkins Medicine, Microsoft and The Walt Disney Company, Europe & Africa, won big in Workplace Culture. Johns Hopkins Medicine’s “When The Dust Settles” stars RN Nurse Manager Robin Lewis-Cherry, MSN, as she performs spoken word poetry honoring her colleagues’ courage, commitment, sacrifices and resilience during the pandemic. In Hybrid Events, Left Field Labs and ViacomCBS Consumer Products took home the top honors, the latter for “ViacomCBS Consumer Products Virtual Partner Summit,” a recap of their virtual partner presentation utilizing UNREAL Engine to create a virtual stage for presenting updates on their shows. PBS, CTRL5, The Department of Veterans Affairs, American Documentary Inc,, Setter Studios and Grounded brought home the gold in Sustainability, which highlights the many ways video and television is being used to center stories around environmental issues — a powerful way to disseminate critical information about the current and future state of the planet.

The Telly Awards also announced Al Jazeera Media Network as Telly Company of the Year for the second year in a row. With work including “Al Jazeera Investigations – All the Prime Minister’s Men” to “Holding on to Ukraine” and “Life in Syria” told through the eyes of displaced children, the Telly top honors reflects how influential the media company is with their powerful, unique form of reporting and storytelling. Al Jazeera Media Network’s work this season continues to embody what it means to create compelling, gold standard video journalism.

Finally, it was another standout year for the “People’s Telly Awards”, which are given to the most-loved pieces chosen by The Telly Awards’ audience. Winners include Al Jazeera: “Al Jazeera Investigations – All the Prime Minister’s Men”, the National Parks Conservation Association’s “One Park. One Story. Harriet Tubman Underground Railroad National Historical Park,” and Operation Smile: “A Window to the World: The Anthony L. & Hideko S. Burgess Interactive Learning Center.”

To further reinforce its commitment to produce and share stories that highlight its diverse community, the Telly Awards launched new endeavors including The Telly Award Podcast, which brought together industry experts like Felicia Pride, writer and producer of ABC’s hit show Grey’s Anatomy and Navid Khonsari, game writer and producer of household Rockstar games Grand Theft Auto and Max Payne, to share insights, debate their differences and find common ground in their forms of storytelling. The Tellys also reinstated the extremely popular Tellys live experiences, which featured work from the likes of The New York Times and The Atlantic. “Each of these events were attended by the diversified body of The Telly Awards, including larger corporate agency entrants as well as smaller independent creators and production companies,” says Dridje. “Our podcast and live events are some of the best ways for us to be able to bring together these groups, increase our brand awareness and strengthen bonds between our current clients as well as develop relationships with new partners and entrants — all while showcasing the very best work from our community.” 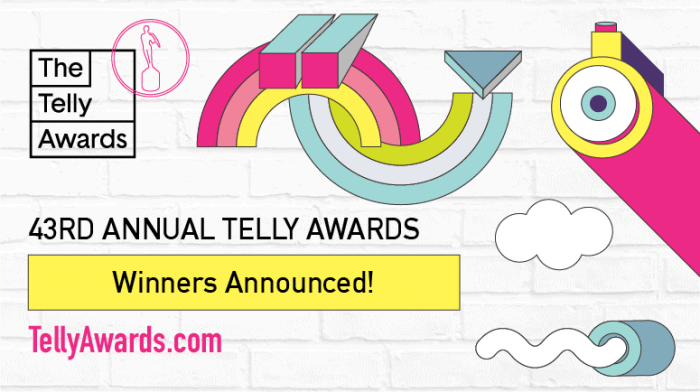 Highlights from this year’s Telly Gold Award winners include:

Microsoft won for “Power On: The Story of Xbox” in Games

Nice Shoes won for Audi: ”E-Tron Showroom” in Use of AR

About The Telly Awards: