Last week, the multi-platinum band Barenaked Ladies announced that their 16th studio album Detour de Force will be released on July 16, and shared the topical new single “New Disaster”, which focuses on the craze and impact of the 24/7 news cycle. Today they share an animated video for the new single to go alongside the track’s timely subject matter.

The video uses a graphic novel style presentation with comic book visual language to tell the story of the quintessential family unit who are watching the news. The mother and father are hypnotized by the TV screen and the son – by his mobile phone screen. The screens are showing chaos and destruction in the 24-hour news style, with an antagonistic anchorman and aggressive advertising, complete with nods to films like Dr. Strangelove and They Live. However, the little girl sees past the screen and her spell is broken by the music of Barenaked Ladies. She becomes a part of the music and brings that joy back to the living room and liberates the hypnosis of the rest of her family.

Ed Robertson (Songwriter, lead singer, guitarist) says of “New Disaster”, “It is about the distraction of modern politics coupled with the pressures of the 24-hour news cycle, which is so sensational, un-vetted and un-researched. It seemed like the Nostradamus predictions of new disaster were getting worse and worse, even after we recorded the song.”

The video was created, illustrated and animated by Sarajevo (B&H) based artists Enis Cisic and Toni Huml. Cisic has had his work shown in festivals and galleries internationally, and seen on the pages of Marvel comics. He was the artist behind the award-winning comic book “The Secret of Nikola Tesla”. Huml has worked on multiple award-winning music videos, animated short forms, and feature film VFX.

The eagerly awaited album was produced by JUNO and Grammy award winner Eric Ratz and Mark Howard, and features 14 newly minted tracks including the Consequence premiered “Flip”, a buoyant and sonically adventurous debut single and BNL’s first new music in four years. Detour de Force is available to pre-order and is available on CD and digital formats, along with a limited edition blue double vinyl featuring a bonus track. 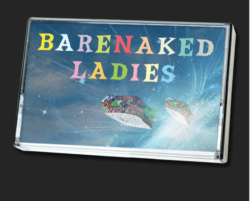