The eight-episode Max Original limited series “The Staircase” debuted Thursday, May 5 on HBO Max. Inspired by a true story, “The Staircase” explores the life of Michael Peterson (Colin Firth), his sprawling North Carolina family, and the suspicious death of his wife, Kathleen Peterson (Toni Collette).

Created by Antonio Campos who also directs six episodes, “The Staircase” is co-produced by Annapurna Television, and written and executive produced by co-showrunners Campos and Maggie Cohn. For the series’ captivating main title sequence, Campos, Cohn, and their colleagues turned to one-stop cross-media production company Sarofsky.

Cinematically introducing the series’ main credits, the narrative begins with blackness, as a white line traces a set of stairs. Switching scale with sleight of hand techniques, the line-work becomes a three-dimensional floor plan, rendered with photorealistic glass. Inside the see-through walls are human forms resembling Michael and his family members. Prowling on voyeuristically, glass furnishings and artifacts refract kaleidoscopically, varying between sharpness and abstraction, until light patterns resolve into darkened stairs. From a top-down view of the glass 3D house, cutaways juxtapose up with down, man with woman, and togetherness with isolation, finally withdrawing to fully view the series’ iconic setting, then soaring back in to find the simple white line of the notorious staircase, and the series’ title.

In Campos’s words, “It was always our hope that the main title sequence would help establish the complicated family dynamics at play while capturing the show’s themes. The sequence does that, but more importantly, by presenting these Escher like impossible spaces and portraying the interior of the house as a maze – which is constructed and then deconstructed over the course of the sequence – it really presents a lens through which the audience can view the series in a visually exciting way.”

Working in close collaboration with Campos and Cohn, this project was another tantalizing assignment for Executive Creative Director Erin Sarofsky, Creative Director Stefan Draht, Managing Director/Executive Producer Steven Anderson, and team Sarofsky. By Sarofsky’s account, preliminary discussions with the showrunners led them to focus on a few specific angles: First, they wanted to explore the home both as an investigator, and as a place where a family was raised; second, as a complex story with varying theories contributing mystery and complexity at every turn; and finally, the fact that everything in Michael’s life feeds the mystery around this staircase. 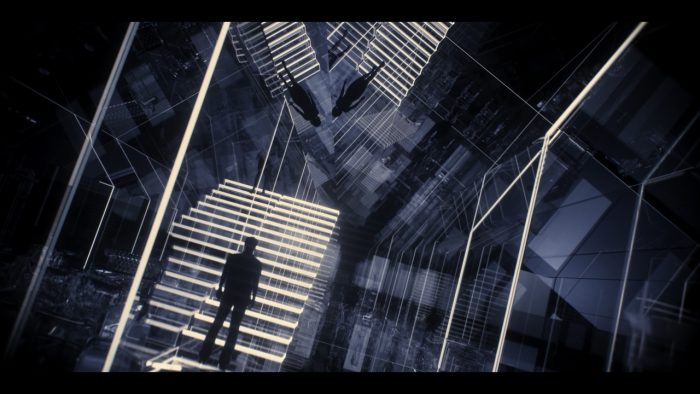 “Thematically, Antonio and Maggie were focused on the layering and complexity the show wrestles with,” Draht began. “Aspects of this include the lack of clarity around the main plot, the importance of the characters’ varying perspectives, and family dynamics. The idea of using the staircase as a visual element was an open question, which prompted us to think about ways to avoid obvious solutions.”

Among the concepts presented, show executives immediately embraced a representation of the family home as a glass model. To humanize the concept without spoiling narrative or plot, Sarofsky’s creatives diligently translated relationships and interactions into moods and abstractions.

“Antonio and Maggie were great collaborators throughout the process,” Sarofsky added. “Antonio consistently pushed us to investigate even more surreal and Escher-like approaches, describing the goal as wanting viewers to sense the complex journey to come, while trusting that the show will lead them through.”

Into a House of Glass 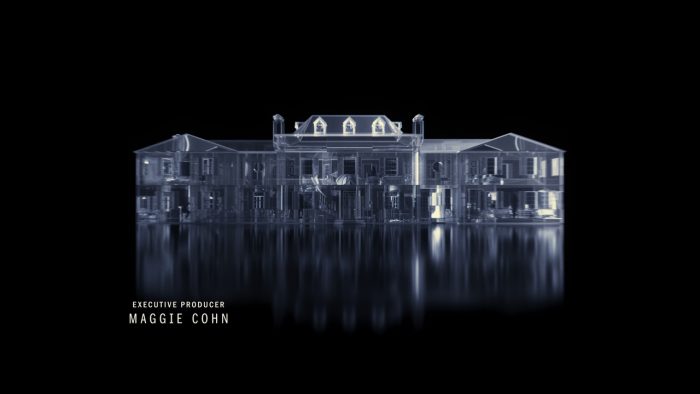 Draht led a detailed walkthrough of Sarofsky’s production process behind this sequence.

“Like many of our title sequences,” he said, “the concepts all began life in Adobe Photoshop and evolved outwards from six to nine concept frames, to approximately 40 frame boards.”

“The huge challenge with a material like glass is sheer render time: how long it’s going to take to produce a clean 4K frame,” Draht continued. “For this reason, we landed on using GPU-based rendering solutions, which was necessary to allow our artists to preview the materials during the look-development phase.”

After testing multiple renderers, the team opted for OTOY Octane Render, which Draht credits as being essential for meeting their delivery schedule. All 3D animation was created using Maxon Cinema4D, with 2D animation and compositing handled in Adobe After Effects. Davis performed final color grading and finishing via Autodesk Flame.

According to Sarofsky, “Working on an HBO Max main title sequence is the absolute ambition of any main title designer and studio. We were humbled at the opportunity and now we are in awe of the result. HBO Max is truly a place that supports the creation of amazing content.”

“This is a creatively ambitious direction to take with a title sequence, and we are thrilled with the support that Antonio, Maggie, and HBO Max provided to continue pushing the concept,” Anderson concluded.

“The Staircase” is co-produced by Annapurna Television and written and executive produced by Antonio Campos and Maggie Cohn, who also serve as showrunners. Campos directed six episodes and Leigh Janiak directed two episodes.

Director, creative director, and designer Erin Sarofsky kick-started Sarofsky in 2009 and formed a group of extraordinarily talented makers who have been providing their services to leaders in the advertising and entertainment industries worldwide. Today, Sarofsky’s makers use animation, visual effects, motion design and live-action to collaborate with customers from concept to delivery, producing work that is visceral, innovative and diverse. With artistry that encapsulates in-house long format, sublime commercials, brand films, title sequences and much more, Sarofsky’s reputation for breakthrough design, its proven multi-media production expertise, and its fabulous Olson Kundig-designed studio in Chicago’s West Loop all constitute key components of the attraction. Learn more at https://www.sarofsky.com.