The Love, Sex and HIV animated shorts were commissioned by The Open University Broadcast and Partnerships team as a companion piece to the BBC and OU documentary, ‘AIDS: The Unheard Tapes’. This project focuses on recorded interviews discussing personal experiences of living with HIV when the Aids crisis was at its peak. 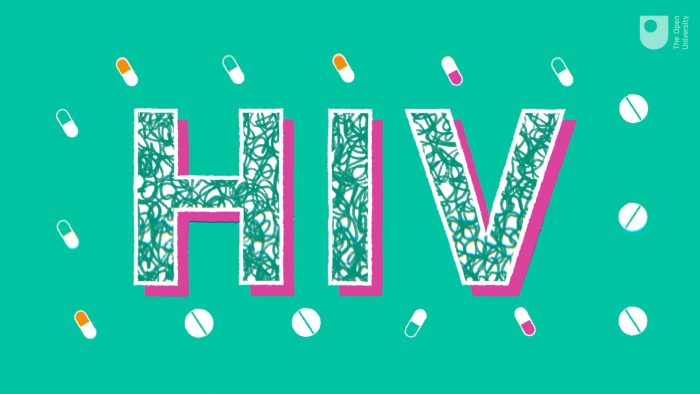 In the 1980s and early 90s, fear of AIDS was at its highest with homosexual relationships and lifestyle as a central trope within media and society at large. A huge turning point for those with HIV came in 1996 as new treatments and drugs became available helping people to be healthier for longer and giving them the opportunity to fully experience life.

Peter Keogh, Professor of Health and Society at the Faculty of Well-being, Education and Language Studies, is a nominated academic consultant on the programme. He saw an opportunity to explore the experiences of people living with HIV once these treatments had become available. Prof Keogh wanted to highlight how people with HIV could negotiate their romantic and sexual relationships and manage to live otherwise ordinary lives. It was an exploration of stigmatization and of managing the reality of living as HIV positive.

For the animated shorts, Professor Keogh dug into an archive of interviews conducted over the last 30 years and selected four contributors. Each interview was a different example of living with HIV. Transcripts were taken, names changed, and accounts were voiced by an actor.

Andrew Hudson, Senior Broadcast and Partnership Manager at The Open University said “We felt that animation was an effective way to represent a sensitive subject matter. Animation makes it easier for us to set a tone and convey a feeling rather than being explicit. We also wanted to show our speakers living ordinary lives where they negotiate their relationships while living with HIV in a positive way. We didn’t want viewers to feel negative or melancholic towards our speakers, or for the subject matter to be sensationalised.“

Having already proved their worth on ‘The Secrets of the Museum’ animations for The Open University, Kong Studio set to work creating another series of shorts. Animators Natasha Pollack and Emily Scaife set to work producing two episodes each, while Joe Blaxland’s motion graphics approach for the more stat-heavy introduction completes the set.

Emma Burch, Executive Producer at Kong Studio said, “We were really excited by the script. One of the favourite parts of our job is finding the right talent for a project. Emily’s work had been on our radar for a while, and we thought her abstract approach would be an ideal fit. On discovering she needed flexible working hours, we came up with the idea of multiple animators. We always enjoy collaborating with Natasha and love the character she injects into her work. The interviews were allocated based on their content and I feel they fit both animator’s styles perfectly.”

The Open University team didn’t give the team strict visual briefs, instead emphasising the tone and feel they wanted to evoke from the shorts. This gave the animators freedom to interpret the interviews as they wished, with only minor tweaks here and there.

Animator Natasha Pollack worked with Kong Studio last year on an explainer video for Waltham Forest Council and had impressed the team with her hand-drawn style and wit. Natasha set to work on designing and animating Andrew and Elisa’s interviews. Natasha’s figurative approach lent itself well to illustrating the complex issues around using barrier protection during sex, with the silly metaphor or wearing of a hat being a firm favourite.

On her shorts for ‘Aids: The Unheard Tapes’ Natasha Pollack said, “This project has by far been the most sensitive animation I have worked on, and I had to approach animating ‘The Unheard Tapes’ from a fresh point of view. My own work can be glib and silly, so I was initially concerned about the level of humour I should inject into the shorts. I didn’t want them to appear flippant or insincere. The character design had to be quite fluid so that ethnicity would be ambiguous. I also wanted the figurative characters to flow into one another to show the passing of time and different relationships”

Lisa and Ash’s episodes were designed and animated by Emily Scaife, known for her abstract and experimental style. Having recently become a mother for the first time, Emily had the extra challenge of developing the animations while also caring for her one-year-old. Kong Studio’s flexible approach to working meant that Emily could fit in designing and animating the shorts from home to work around her family schedule. For Lisa’s account about having a baby shortly after testing positive for HIV, Emily drew on her own recent experience of birth and joy of having a baby.

Emily Scaife said “Throughout the process, I had to keep at the back of my mind what feeling I was trying to evoke. What mood am I trying to hit at certain points in the accounts. The Open University team gave me a lot of freedom to interpret the interviews as I wished and let the shorts develop organically. This is a rare project where I wasn’t tied to an initial animatic or storyboard. Instead, I produced test animations and got feedback from the Kong and OU teams on these instead. For Lisa’s story, I wanted the colours to be soft and darker. I hit upon using my son’s nightlight, cutting out motifs from different coloured gels and filming the projections on my bedroom wall. The footage was then animated into the final short. It has been great to have the flexibility and work with such a dynamic team while enjoying creative freedom.”

Kong co-founder Tom Baker on their working relationship with the OU, “We love working with the OU as you always learn something, and the subject matter can be absolutely anything. ‘Aids: The Unheard Tapes’ was a bit different. The subject matter is heavy but there’s a redemptive arc in the storytelling, with a bit of hope shining through. It needed to be serious, mesmerising and captivating, much like the tapes themselves. What was so satisfying is how two very different animators like Emily and Natasha can come together to merge these stories and styles tackle a difficult subject in a thoughtful and coherent way. The OU were on board all the way through. It’s nice when a partner trusts our instinct and gives the animators the chance to let the project visually evolve the way it should.”

Emma Burch said “We also had 4 very different voiceovers giving us the opportunity to work with Joyce Carter-Grey and Daniel Pinto for the first time. All finished off with Fonic’s simple but effective sound design, making the series feel cohesive.”

On the final films, The Open University’s Andrew Hudson, says, “Using three animators for the five episodes has worked extremely well. What started as a necessity to get the animations delivered in time for the BBC and OU co-production broadcast, has resulted in the shorts being distinct from one another while maintaining a consistency in colour and tone to make one cohesive series. Each animation reflects the subject well, whether that’s the representation of Andrew’s dating to the possible trauma of having a baby who could be HIV positive. The videos contrast and complement one another while avoiding becoming sensationalist. Instead, we see people living ordinary lives despite their HIV diagnosis. Our contributors are not allowing HIV to restrict their lives or define them.“

‘AIDS: The Unheard Tapes’ animated shorts are available to watch from Monday 27th June on The Open University’s Broadcast and Partnership page here.