NEW YORK, NY — Beloved New York City actors, singers, choreographers, musicians, television, and late-night hosts have come together to produce a video rendition of Billy Joel’s “New York State of Mind” to encourage the city’s recovery from the pandemic. The effort was conceived of and produced by NYCNext, a passionate group of New Yorkers from all disciplines and industries who have joined together to help inspire New Yorkers, with a particular focus on the arts community.

“Our goal with this project is to create a collective movement of New York City pride. We want to celebrate our artists as well as the city we love and inspire everyone to step in and support NYC in whichever way works for them,” said Maryam Banikarim, co-founder of NYCNext. “This all-volunteer movement is a testament to the power of New Yorkers — creative, passionate do-ers who step in to help each other and their city when the going gets tough.” 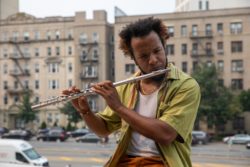 All artists featured in the film donated their time, voices, and talent to the project, each proud to display their passion for the city that never sleeps.

Said singer-songwriter, actress, author, and producer Sara Bareilles: “To sing Billy Joel’s iconic song alongside my community members at a time when the city needs us all was so meaningful to me. I’m so grateful this project came to life in such a big way.”

The film itself encourages viewers to join the movement by visiting NYCNext.org, which lists dozens of ways New Yorkers can get involved, by supporting our community of artists, local businesses and restaurants, and many more. 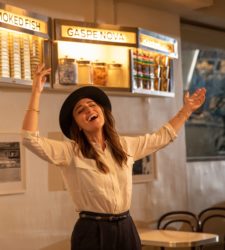 “I’ve always loved ‘New York State of Mind,’ and as a New Yorker myself, bringing together all of my favorite singers, artists, and musicians to collaborate on this inspiring film was a dream of a lifetime,” said Tom Kitt, who co-conceived the project and is a multi-award-winning composer and musician, as well as a founding member of NYCNext and MUSE.

“It was an epic undertaking, the equivalent of shooting 25 different music videos for one film. We wanted to show the diversity and beauty of all five boroughs. Our shared vision with NYCNext and Tom Kitt, who were the perfect collaborators, was for each artist to wake NYC from its slumber and breathe life back into the city by singing this anthemic song. I hope the heart and confidence behind these performances will inspire audiences to do their part to give back in whichever ways they can,” said Emmy Award-winning Founder and Executive Creative Director of Brooklyn-based, creative production company Smartypants and NYCNext Founding Member Joshua Seftel, who directed the film. “My team at Smartypants loves telling underdog stories and we felt we could do justice to something as iconic as ‘New York State of Mind’. It’s a song that was written in the 70s to pick NYC up when the city was struggling and was used again as an anthem after 9/11. This seemed like the perfect time to bring it back around. There’s a timeless quality about the piece. It survives and continues on, just like NYC.”

“This is an incredible love letter to NYC from an impressive cross-section of our arts and entertainment community, who have consistently shown up to give their time, creativity, and talents in support of our beloved city in times of crisis,” said the Commissioner Anne del Castillo of the NYC Mayor’s Office of Media and Entertainment. “We appreciate the dedication of NYCNext in spearheading this collective ‘New York State of Mind’ effort to connect New Yorkers and others to ways they can assist in the City’s recovery.”

This rendition of “New York State of Mind” will appear across the entire New York media spectrum — in taxi cabs, at New York City’s homecoming concerts, as part of the New York Stock Exchange’s outdoor events at Experience Square, and many other local venues and media outlets — from now through year-end. iHeartMedia New York will promote the “New York State of Mind” video on-air across all its six radio stations, as well as on the stations’ websites and social media channels, encouraging listeners to watch the performance and support the New York City community.

This project was made possible by many partners, including Edelman, MUSE, the New York City Mayor’s Office of Media and Entertainment, NYC & Company, NuRide Transportation Group, Our Man in Havana, Partnership for New York City, Reed Smith LLP, SAG-AFTRA, Smartypants, as well as Universal Music.

Ways to get involved

There are many ways to get involved and give back to New York City through NYCNext’s amazing partners. Please visit NYCNext.org to learn more.

If you post on social media in support of our efforts, don’t forget to use the hashtag #NYCNextStateofMind.

We are a group of volunteers from all disciplines and industries, representing all five boroughs, who love NYC and have joined together to help the city we love recover and rebuild and to inspire others to take action. To date, NYCNext has produced live popup events that bring creative energy and economic support to neighborhoods in all five boroughs. We want to position NYC as a creative and innovative city that will spark its next great era through the resilience and creativity of its residents. This is not a profit-making endeavor. www.NYCNext.org.