There’s an 800-pound gorilla in the room, and it’s attached to your TV via HDMI.

While motion design enjoys an ever-brightening spotlight in film, commercials and interactive venues, its role in video games often goes unnoticed. But in everything from GUI design to narrative sequences, motion design is clawing its way to center stage, where game designers are realizing its power for directing user experience and telling stories in innovative ways.

An 8-year veteran of the gaming industry, Wylie Robinson works at the intersection of graphic design, interactivity and game design for Ubisoft Toronto. Before that, he was stationed at EA in Vancouver. Titles under his belt include Splintercell Blacklist (Ubisoft), Need for Speed 10 (EA) and DefJam (EA).

In our chat with Wylie, he explains the role of motion design in games, talks about the challenges facing the industry and shares some of the process behind Splintercell Blacklist.

How you define design in games? Are we talking strictly about UI design? Or would it also include motion design sequences or even diegetic design elements (posters on walls, graffiti on buildings, etc.)?

The design I work on consists of the UI and motion graphics for our games. It would be great if signage and other diegetic items were added to my list.

Often in a game, you will see these crazy high fidelity characters. The material on the surface of the building the character is standing in front of is marvelously lit and textured, and then slightly to your right is the worst sign ever. It’s like the artist missed capturing the essence of the location.

This totally breaks the believability of an environment for me.

My title for Splinter Cell Blacklist was Presentation Director. I was responsible for the art direction of the UI and the Projected Text, dynamic typography that floats in the game world and guides the player through the game. This is a visual staple of the Splinter Cell franchise.

I saw an opportunity to enhance the game narrative utilizing the Projected Text technology. So after convincing the Creative Director and the team, “Mographic Direction” was added to that list as well. I would have enjoyed working on the in-game signage as well, but too much was needed and a lot of those visuals already fell on the plate of the game’s Art Director.

Here’s a breakdown of the items mentioned to give those that haven’t played or seen the game a better understanding of the elements I worked on with my team:

User interface the player used to select single player missions around the world. The map would also display your online friends’ current multiplayer game location and allowed players to join them in those games.

Art Direction of the UI the player uses to upgrade and customize their player character.

Our answer to the 1970s split screen telephone effect. We used these to visually narrate the conversations taking place between the main character, Sam Fisher, and his team members.

Say, for example, Sam picked up a piece of paper with some chemical compounds scribbled on it. He then scans it with his OpSat (think of the most powerful smartphone in the world) and sends the data to HQ for more info. The projected panel would display a representation of the data transfer, backend computer crunching of the scribbles, and the CPU crunches the data leading to his superhero-like “a-ha!” moment.

This all happened in 3D space with character animation and choreographed cameras. The idea seemed way simpler in my storyboards.

Art and creative direction of the mograph animations that appeared on the HQ smart table and command and control screen.

These animations were carefully synced to the scripted in-game character animations to give the appearance that the actors were interacting with these devices. I worked closely with Wolf & Crow on the creation of these, and I think in the end there was about 40 mins of mograph… insane. 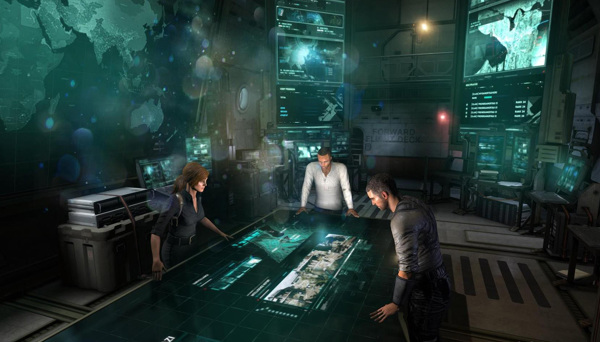 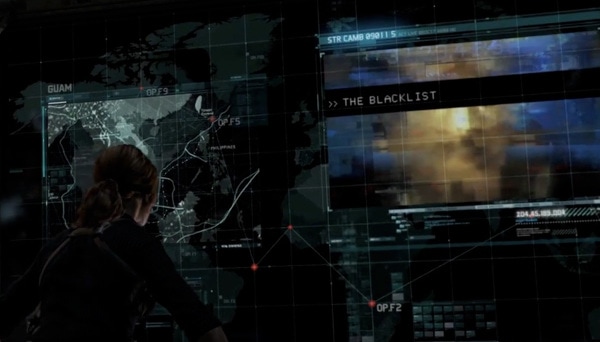 Looking at your Need for Speed 10 and Splinter Cell Blacklist projects, your design work has a decidedly filmic quality to it. Is that a fair appraisal? If so, is that something you consciously try to achieve?

The filmic look really supported the core direction of those projects. So we added things that organically happen in film and other physical mediums. We embraced imperfections and welcomed the beauty of visual errors.

I really like to try to hide how the game engine is rendering what the player/viewer is seeing by adding depth and layers to remove that hard-edged computer look.

Where do designers like you fit in the production pipeline for games?

I’ve been lucky to always be there at the start of production. That’s pretty cool, because I’m able to help set the tone of the game’s branding while also establishing the look of the game’s presentation package.

Many games consider the UI towards the end of the project. The thing that hurts is the branding is normally taken over by a different team to be finished before the end of the production. It would be awesome to see the game branding through from beginning to end.

UX design generally comes from the game design team. Sometimes they provide wireframes for various features or direction for the specific design features. But we also suggest other ways to communicate the needed message. So when you see a bar, it’s because our design was rejected. Ha!

Ubisoft is pretty dope because we do lots of user testing. Every so often, I can sneak our design solution in to be tested, and it just might stay if it tests well.

In your email to me, you expressed some concern about the state of design in games. Can you explain what the problems are, as you see them?

Games tend to be a bit outdated in terms of design.

Maybe there is talk about a beautifully rendered trailer, but not UI/UX design.

When you want to see what’s new in interactive design, the place to look is web and mobile apps. The game industry can sometimes forget there are other mediums to draw inspiration from, and the further you look, the more interesting things can get.

There is a need to allow more time for the creative to be developed. Often the pattern is to try a bunch of different directions and spend less time fleshing out one great direction. I think many teams have a fear of settling on the wrong idea.

The awesome thing about making creative stuff is diving in face first with no fear right smack into uncertainty and resurfacing with something that the world thinks is rad.

How can design in games be “fixed”?

There needs to be more thinking about how to take advantage of gaming as an interactive medium. I know it sounds silly to say video games don’t know they are interactive, but many times we forget this.

For example, Metal Gear Solid Snake Eater (2004) had an interactive title sequence. You could move the sticks around and effect the design composition. Now thats something you can’t do anywhere else but in a game, and we need to realize every moment has room for interactive innovation.

We’ve been talking chiefly about AAA games. For indie titles, there seems to be the this desire to have as little UI as possible. Why do you suppose that is?

HUDless game design isn’t really a new thing. I started my game dev thing at EA Chicago as they were finishing up Fight Night Round 3, and it was all about players knowing the state of the boxers by they way they were animated: bruises on their faces, audio cues etc. Everything that said “this is a video game” was consciously removed.

This logic is considered risky when you are attempting to sell millions of copies, because the game then requires more exploration and observation. Indie games have more room to take those kinds of risks, and I think players expect them to take those risks.

Keep in mind gaming has its Michel Gondry vs. Michael Bay thing going as well… but personally, I’m shooting for the Tarantino spot, ha!