Nicolas Ménard is a graphic designer and animator with a distinctive voice. Jack Black is a comedian and musician with a distinctive take on humor. Together, they are a surprisingly charming duo, as “California Inspires Me” perfectly illustrates.

Created for The California Sunday Magazine & Google Play, the short is full of clever visual metaphors but anchored by a simple, approachable style. Nicolas was kind enough to share his process with us.

How did you get this project?

The California Sunday Magazine wrote me an email. They introduced themselves as fans of my work and they wanted to work with me.

It’s always a pleasure when a new client wants to collaborate directly instead of going through a pitching process. And when they said it was for an animation on Jack Black, I jumped right in! After all, this is the closest I’ll ever get to Hollywood.

What was Google Play’s role in this? Were they involved creatively?

The California Sunday Magazine collaborates with Google Play for their California Inspires Me series. To my understanding, Google Play is taking on the role of a sponsor and online distributor. They are indeed involved creatively; everything had to be approved by the folks at the Google agency, as well as the folks at the magazine.

My film is the third in the California Inspires Me series. You should check out the one for Mike Mills. It’s a real treat!

With every new animation project, I try to find a style that would fit the needs of the client. I like proposing something different than what I usually do, something fresh. So I suggested a Matisse inspired style that I thought would fit the warm vibe of Jack’s anecdotes on California. Something that would move and feel like paper cut outs.

“I suggested a Matisse inspired style that I thought would fit the warm vibe of Jack’s anecdotes on California.” 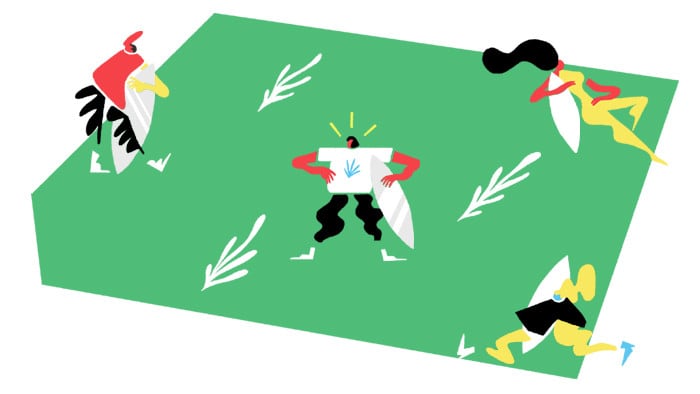 I had a hard time getting a sign off on that style. The Matisse approach did well at the magazine, but Google wasn’t so keen. They wanted something that looked like Loop Ring Chop Drink, my RCA grad film.

So I ended up proposing that design for the character: 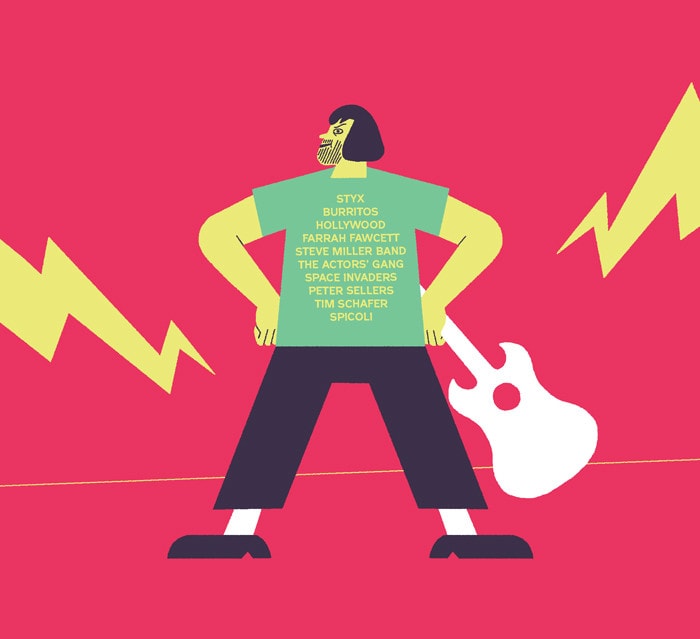 There are so many brilliant visual moments. One of my favorites is when Jack Black takes the red tuning key from the head of his guitar and puts it on his nose, like a clown. Did you come up with that idea?

I sure did! I wanted to include a few visual metaphors to add some depth. To me, these bits feel more satisfying than the more literal ones because they play with ideas specific to the medium of animation.

Do you have a favorite moment?

I’m pleased with everything under the 1 minute mark. The skateboard bit was better in an earlier version; Jack was smoking. But I had to remove it because of Google’s company policy.

It reminded me of that time when Morris had to replace Lucky Luke’s cigarette for a wisp of straw. I hope they don’t mind if I show the image below: 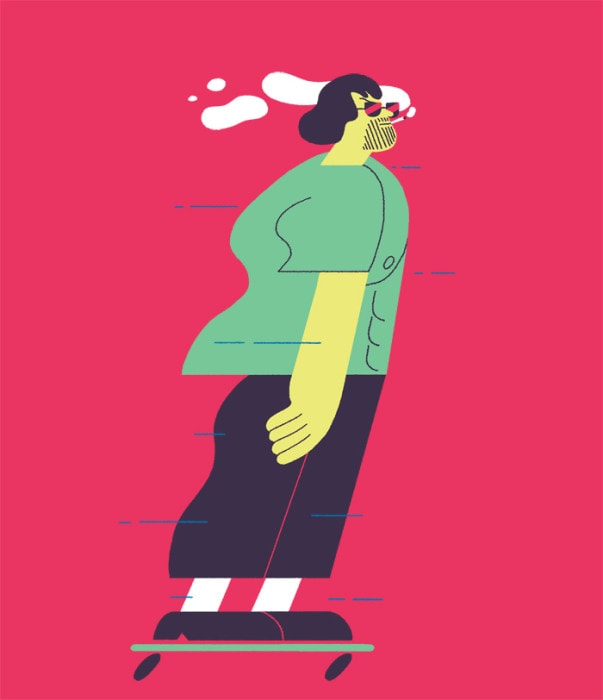 Oh, and talking of changes, the whole bit with Farrah Fawcett was involving Jack Black dressing up as her. I thought it was pretty funny and absurd, but I guess it went a little bit too far. Those bits were all animated and finished, here’s one of the shots:

“The whole bit with Farrah Fawcett was involving Jack Black dressing up as her. I thought it was pretty funny and absurd, but I guess it went a little bit too far.”

How long did the project take? And were you working alone or with a team?

It was a tight schedule. The project timeline was 4 weeks. I planned 1 week for the design, and 3 weeks for the animation. But as mentioned earlier, agreeing on the style took much longer than I expected.

When they finally signed off the design for the Jack Black character, I had 2 weeks left to do the entire film, and no storyboard on the table. I was pretty anxious. I started animating straight away, taking decisions for each shot as I was going along.

I hired the fantastic Anne-Lou Erambert to help me with the animation. She’s very efficient, and we work well together. She knows my workflow by heart. She couldn’t believe we would do 3.5 minutes of animation in 2 weeks, but we managed to pull it off.

I have to say, they were amazing clients. I got into that situation because my planning was bad. As a director, I should learn to avoid this kind of situation to aim for a higher standard of quality. Learning every day.

The sound production and music was made after the delivery by Mooj Zadie and Shannon Ferguson, who were hired by the magazine. I didn’t direct that part, but they did a fantastic job. It was great to work with such talented people.

What else are you working on at the moment?

This project was finished just before Christmas, so client-wise, not much is going on for now. I’m waiting for jobs to fall from the sky.

It’s nice though; it’s giving me some time to do leftover paperwork. And hopefully, it will give me some space to start working on a new short film for the Late Night Work Club Volume 2.