Our Community, Our Platform, Your Voice

The infamous group of hackers that identify themselves as “Anonymous” are, as their name suggests, incredibly hard to pin down.

Are they activists? Heroes? Terrorists? The answers depend on your own personal set of values. 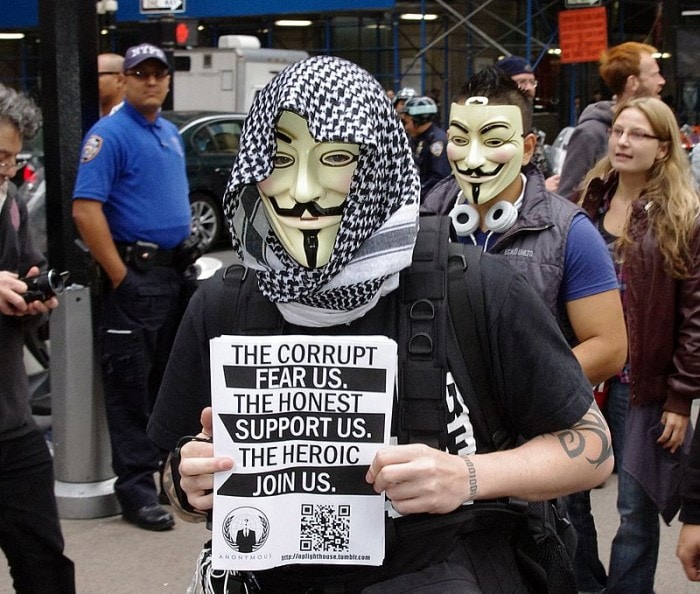 To cap off his undergraduate degree in Motion Media Design from the Savannah College of Art & Design, Chris Finn decided to embrace the moral ambiguity of “hackvisits” and make Anonymous the subject of his senior thesis film. The result is a poetic short film that functions as both social commentary and a reverential warning.

This project was created for your senior thesis. How long did you have to create it?

The Motion Media Design curriculum at SCAD is designed for two 10-week quarters of production for senior projects: one quarter for concept/design and one for animation.

Why Anonymous? How did you settle on them as your subject matter?

The topic of Anonymous really just fell into place for me. I was looking for something I was interested in but would also correlate to a specific mood and tone I was passionate about. Anonymous had both of these qualities.

I was struck by the mesmerizing but threatening power of Anonymous, and I dug deeper into the culture behind the mask. Anonymous’ transition from pranksters on a message board, 4chan, to powerful vigilantes for global justice was captivating to me. Their highly adaptive operations strengthen their dynamic structure over government and corporate institutions in a seemingly unorganized manner.

The month leading up to the start of my production happened to be the time when the Sony Pictures Entertainment hack occurred. So the news was filled with the topic of “hacktivism,” and while Anonymous weren’t responsible for the initial attack, they did involve themselves later by encouraging Sony to release The Interview movie as planned.

I was fascinated by those cyber attacks as they unfolded throughout that month. They certainly lingered in my mind while heading back to school to begin my senior project. 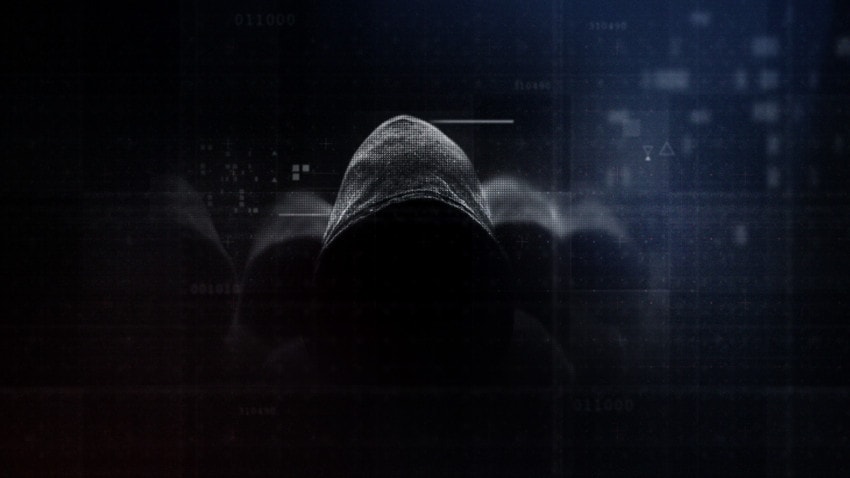 At the same time, I had recently seen Andrew Lloyd Weber’s Phantom of the Opera during a few weeks stay in New York City. The dark, mysterious quality of the phantom character, who terrorized and teased authority while remaining a ghost-like figure, was another inspiration I carried back with me to school. Discovering a way to adapt this tonal quality to the topic of Anonymous led to an exciting conceptual unity.

Anonymous was also a topic that I hadn’t really seen addressed in a motion design piece and that opportunity excited me as well.

How did you learn about Anonymous? What was your research process like?

Diving into research on Anonymous in the early stages of production, it became clear very quickly that there was one person who would be my most valuable asset: Gabriella Coleman. She is a writer, researcher, lecturer and professor at McGill University who has devoted much of her work to hackers and digital activism.

Her book Hacker, Hoaxer, Whistleblower, Spy: The Many Faces of Anonymous was very helpful in understanding Anonymous and their relevancy. You’ll often see her name pop-up in news articles addressing Anonymous.

It was also important to dig into Anonymous’s previous operations and how they approached their cyber tactics. I looked into their style of attacks, such as DDoS (distributed denial-of-service), in order to authentically visualize these in my piece. 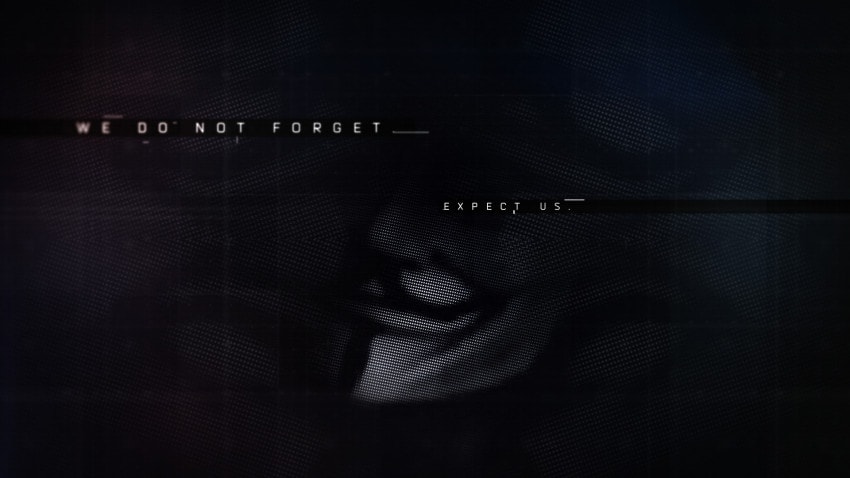 A style frame depicting one of Anonymous’ mantras

Some operations are coupled with videos sent to the target, explaining why Anonymous had chosen them and what to expect. Looking into these videos really gives you a sense of Anonymous’ voice.

Explain your script writing process for us.

Approaching this project, I knew from the very start that I did not want to create an infographic filled with data or a timeline of events. I wanted this to be different. A more poetic approach that touches on the concepts and ideas behind Anonymous that have driven them into being so relevant and powerful. 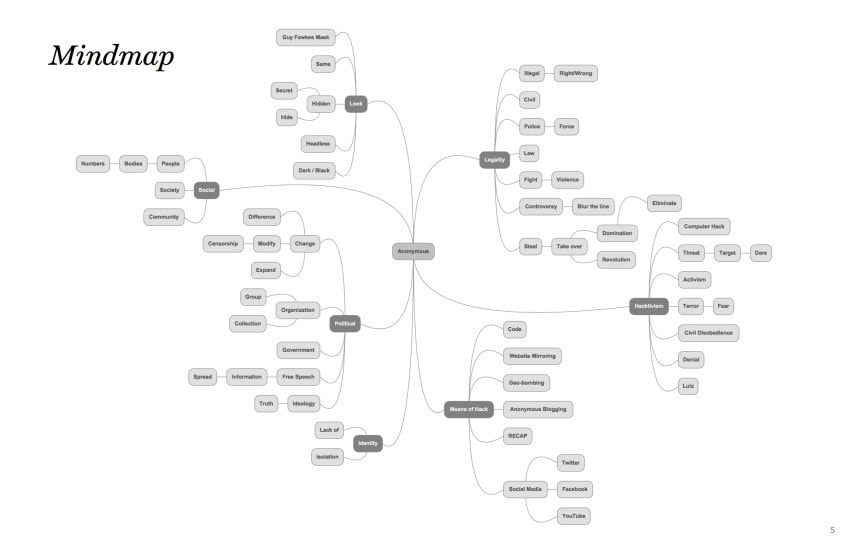 A conceptual mindmap developed during pre-production

Focusing on my main points of research, I began to outline how these concepts could flow together to carry the most impact. I started simply with general ideas and then increased the detail of each line. With a rough script, I approached my voice over talent, Joe Dunlap (a SCAD alum), who is a fantastic writer. He helped me to raise the dramatic effect of my script.

Did the script come before you started your design process?

Yes, the script came before any design frames were created. However, as soon as the idea and mood were formulated in my head, I began pulling reference images to help inspire and flourish this tone.

This helped me to be in the right mindset and imagine the visuals when writing my script. This also allowed me to maintain a dramatic writing style that would promote my intended message and emotions. After the script was completed, I worked to tighten the aesthetic and develop the final look for the piece through references and design frames.

On your Vimeo page, you say: “A certain tonal element of Anonymous resonated with me and immediately translated into an exciting aesthetic I was eager to take on.” Can you explain what you mean by that?

Since my discovery of Anonymous, I’ve felt they emit a certain dark, sinister but powerful and inspiring tonal quality. It’s unlike any other collective or institution I’ve heard of and adds to this uncertainty of fear or support of Anonymous. 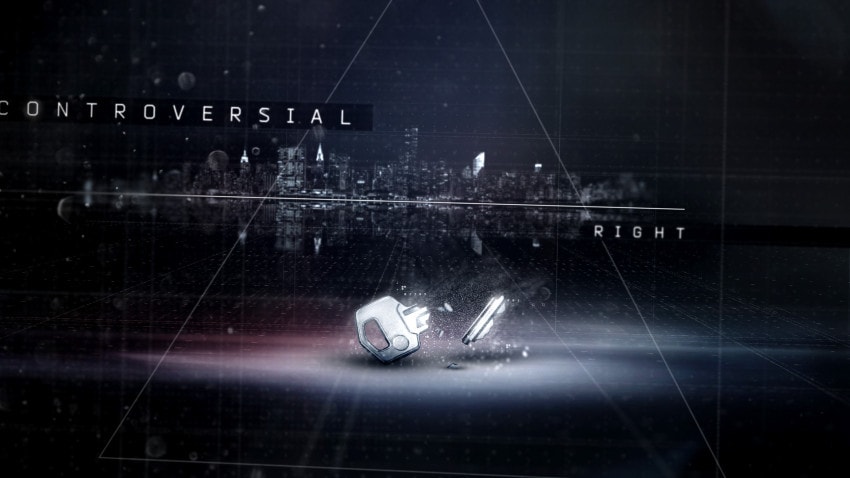 I immediately began to develop how this mood could be reflected in an aesthetic style. What resulted was a design style that was right up my alley of what I enjoy creating the most — but also incorporated a certain UI/glitch approach that I was eager to take on. This new challenge excited me and kept me passionate and dedicated to this project throughout my 20 weeks of working on it.

What was the most difficult aspect of this project for you?

Allowing certain elements of my piece to fit in an intermediate stage between two areas was the most difficult aspect. For example, I knew I wanted to approach the digital, tech, UI look in a more gritty and textured way, representing the guerrilla style of hacktivism. It was difficult to make sure this clean, digital aesthetic worked in combination with a  dirtier, looser look.

Also, technically speaking, I wanted to incorporate a range of elements including live action, 3D, 2D and real-time processing such as pixel sorting and glitch. Finding the right balance of all these elements together was a challenge.

Utilizing pixel sorting through Processing was also something I needed to teach myself throughout production. In the end, I’m very happy with the gritty-digital look pixel sorting provides, which helps to tie the clean, digital and textured styles together.

How much did your project change as you worked on it? Did feedback from peers or professors change your direction at all?

The biggest changes occurred within the script writing and storyboard phase. I was dedicated to finding the right voice that would stimulate a certain emotion in a viewer. Because I’m not openly promoting a stance on Anonymous, I wanted viewers to be left with an uncertain feeling about such a dynamic group.

This phase of the process went through many changes to effectively promote that message. I also worked closely with professors to be sure visuals were chosen that strongly supported the script and ideas I was looking to convey.

I knew that focusing my attention on this earlier phase in production would streamline the animation process, which would be vital to finishing this 3-minute piece in the second 10 weeks.

Talk a little about your time at SCAD. What have you liked the most about going to school there?

We have a fantastic chair, John Colette, and group of professors in Motion Media Design who are dedicated to providing opportunities for us that extend beyond the classroom. Our annual lectures, showcases and workshops bring industry guests from all over right to our door step and allow us as students to bridge the gap between Savannah (in Georgia) and the industry. Almost all of my internship opportunities and connections have come from these events that they hold. They were incredibly invaluable experiences.

I’ve also been fortunate to be in an amazing class of rockstar designers and animators who inspire and motivate me everyday to work harder. We are very supportive of each other and constantly share and learn from one another. I look forward to pitching against some of my good friends soon!

You’re heading off to Gentleman Scholar soon. How are you feeling about that?

I’m thrilled to be joining the company at Gentleman Scholar. After completing an internship with them last summer, I was determined to find my way back into the studio after graduation. Their passion and level of dedication to every project they take on is inspiring.

I love the range of design styles they employ and feel confident in their support of my growth as a young creative. I’m humbled and excited that they are welcoming me back to join their team as a designer/animator.