Editor’s note: Some viewers might find this project NSFW.

Filmmaking thrives on collaboration, and the most interesting work is often built between friends outside the bounds of commercial work.

After beating out the live action competition and snagging a Palme d’Or at Cannes last year, director Ely Dagher was eager to work with music compsoer Matthew Wilcock again. That chance came through Wilcock’s alter ego, MODEL 86, an electronic music identity releasing an EP, Self Help Dance, later this month.

You’ve both created alternate identities for yourselves: MODEL 86 (Matt) and BeaverAndBeaver (Ely). Why?

Matt I like the freedom a pseudonym gives you mentally. Also, it’s not gender specific, it’s not race specific — and that’s the point. I like to think people would presume things about who MODEL 86 is and no matter the answer, it’s interesting. Cultural and societal influences and biases bring you to those assumptions.

Ely I started BeaverandBeaver a few years ago when my projects were getting bigger, and I needed a name and studio to produce and contain them.

BeaverAndBeaver is more on the experimental side and can go from a one beaver studio to a small herd beavers depending on the project. For this EP teaser project, it was a one Beaver studio.

Matt, your day job is with Zelig Sound, right?

Matt Yes, my day job, seems funny putting it like that, because I still love a lot of the stuff I do with Zelig.

I co-own and run Zelig with another composer, Aleah Morrison-Basu. We started it around 4.5 years ago. I’m involved with a lot of the sound design, too.

Was it through Zelig Sound that you guys first met each other?

Matt Yup, I think we met through Vimeo a couple of years a go. Then, Ely got back in touch about a year from when we completed WAVES ’98 (around March of 2015, I think?). Then we went to Cannes this year and won a Palme D’or.

Ely I worked on WAVES ’98 for almost 3 years, and I saw a good opportunity to experiment and get some things out of my system. Matt and I had been working together for a while, and I knew how talented Matt is and how well we worked together. So I was immediately up for it.

Who initiated the collaboration for this EP teaser project?

Matt Me, I asked him if he wanted to talk about collaborating on a teaser. I’d wave our fee on WAVES ’98, and we’d do a skill swap thing.

What was the process like between the two of you?

Ely We initially starting thinking about a music video for one of the tracks, and I had a prepared couple of treatments for that. When we decided to go with the teaser idea, those ideas were used as a sort of blueprint for the Self Help Dance world. Then it was a matter of visualizing different scenes in that world based on the feel of each track.

And that is what you want when you work with someone — someone who’s gonna say "no" or "why?"

Matt Ely went away and sketched the 14 ideas and pretty much nailed them. We met up when he was in London (he lives in Belgium, at the moment) and went through the ideas and refined them. We spoke a lot about what the sexuality meant and the surreal bits and if and how they fit with the tracks.

It was a smooth process. Ely is so considered, he’s the type of guy that makes you double think the question you’re asking when you’re asking them, because of the amount he’s going to process it through his interpretation of the idea and concept. And that is what you want when you work with someone — someone who’s gonna say “no” or “why?”

And his style, it’s just interesting. 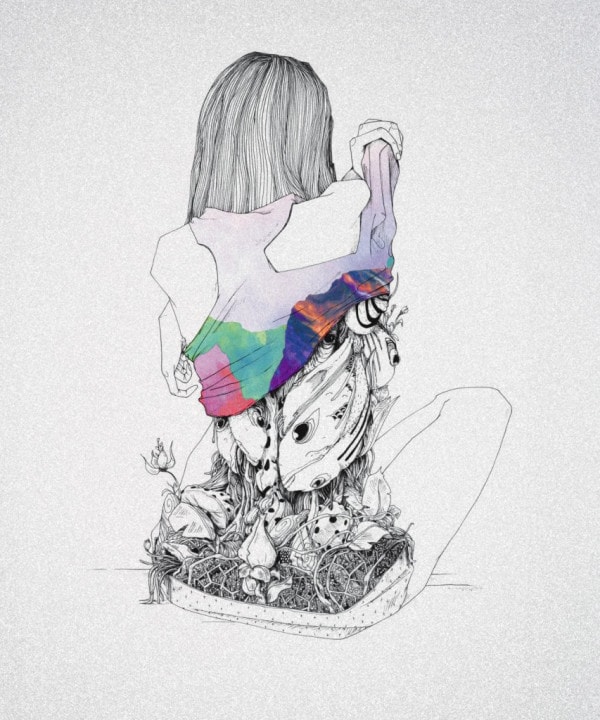 Ely, was your creative process for this project different than your typical process?

Ely Of course, with every project there’s a lot of things to keep in mind while building it up, but this one was a bit different. Since I was finishing a 3-year short film, with all it takes in terms of complexities and frustrations, i wanted to to experiment with something more raw and abstract.

That is one of the reasons why there is no color.

From a technical standpoint, how did you achieve the look of the vignettes? It seems like some of them involve CG geometry, but I can’t tell…

Ely The ideas behind the vignettes was that they are animated illustrations, floating scenes almost frozen in time.

The animations are subtle, and there’s a mix of frame by frame classic animation with some morphing and layer distortion. It’s good that you can’t tell the technique, and I think that’s all in the balance and subtlety of the animation/movements.

Matt, when will the EP be released, and how can people get it?

Matt On the 18th of September. You can listen to FRIEND and CTRL now on soundcloud: https://soundcloud.com/model86

You can PRE ORDER the very limited Vinyl 7” and complete release on http://modeleightysix.com/buy/