Editor’s Note: The following guest post was penned by Sean Pruen, a multi-disciplinary director who recently joined UNIT9 as Experiential Creative Director. For over ten years, he has worked on a diverse spectrum of film, motion, interactive and physical installation projects.

In the 20th century, designers came to realize that graphic design was no longer a static medium that had to be fixed in time. Initially, motion design borrowed narrative traits from traditional film craft, but in the past few decades, it has exploded into a vast array of different territories.

Made up of an expansive and adaptable catalogue of disciplines, motion design’s broad nature makes it incredibly difficult to sum up. However, one thing is clear: by being so adaptable, it is extremely capable of breaking free from the linear restraints of traditional filmmaking, allowing for unique ways for audiences to experience narrative.

Classic films that break from a linear narrative to deliver stories that ask the audience to work a little harder.

Throughout the history of cinema, many directors have used non-linear storytelling in their films. The likes of Citizen Kane, Annie Hall, Memento and Pulp Fiction have taught us that audiences like to be challenged with fractured and disjointed narratives.

Non-linear stories stay with you because they demand careful thinking about all the pieces presented. When you complete that puzzle, you feel a real sense of achievement.

Audiences today want to be challenged and have never been more willing to try something new.

However, cinema is still essentially linear, and you are always presented the story in the way the director intends you to see it.

Throughout my career, I have sought to tell stories for brands that are not simply linear narratives. I get really excited about ideas that break from traditional formats — or at the very least use them in innovative ways.

In today’s digital age, a story can be told in so many different ways and can straddle many different platforms. So, when a brief comes in, it is always refreshing to not be restricted to any one specific execution.

Creativity is all about freedom; its very essence demands we think in a non-linear way to generate new ideas. Audiences today want to be challenged and have never been more willing to try something new.

Choose your own adventure stories were some of the most popular children’s books during the 80s and 90s, selling more than 250 million copies. You are a shark was a personal favorite.

Way back when, there was a series of books called Choose Your Own Adventure. They were written using a second person point of view and the reader made choices that determined the main character’s actions and the plot’s outcome.

They had multiple endings and could be read again and again, telling new stories each time (although you often ended up dying). This was interactive storytelling in an analogue format and a method which has been borrowed from time and time again within digital experiences. 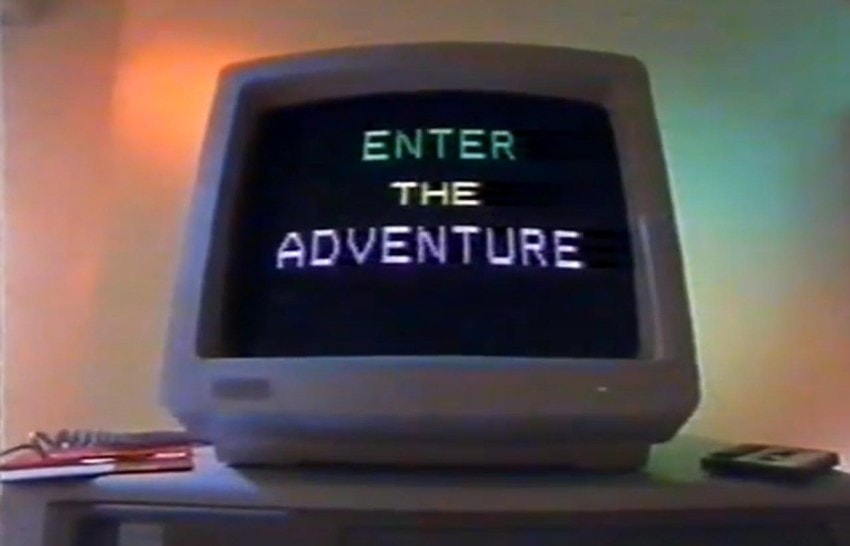 Computer games aside, the internet has become the best platform for realizing this type of interactive story.

Flash and modern browser experiences have let users determine the direction of narrative for many years. This method of user choice points and branching storylines is still being effectively used, and motion design has been at the heart of many of these experiences. It has provided the techniques to make these narratives possible and opened the doors to a deeper level of storytelling that makes the user feel involved. 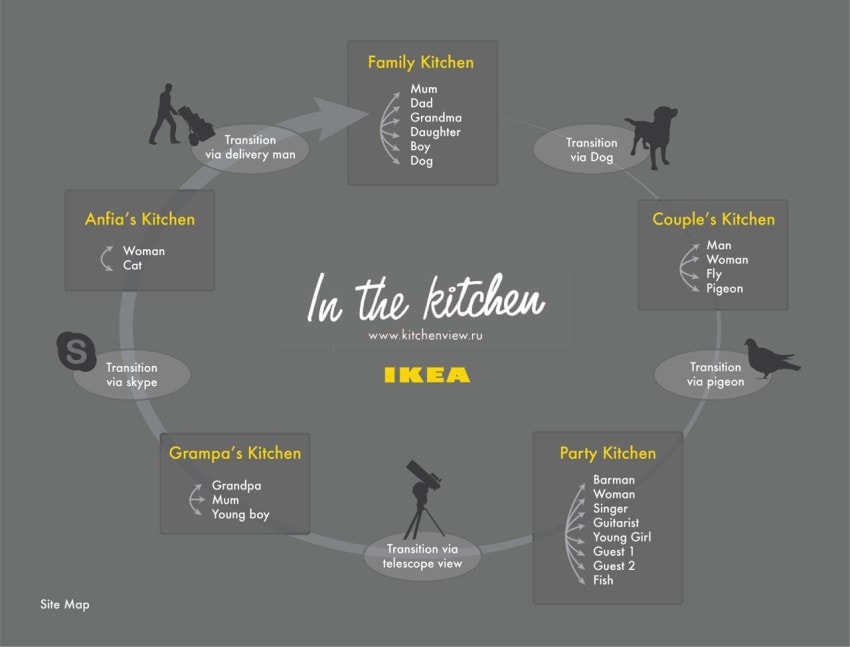 Site map for “In The Kitchen,” an experience that gave users the ability to switch between different characters (and animals) points of view through various interwoven stories.

Back in 2011, I worked on an online interactive project for IKEA to help promote its new range of kitchens. The idea revolved around being able to see different people’s points of view.

As scenes played out in each of the kitchens, users could click on any of the characters within and, in the blink of an eye, be transported to see the action from that character’s perspective.

Some of the many points of view from In The Kitchen and one of the custom camera rigs that was built to shoot them.

There were endless ways to view the stories and discover new things as you navigated through 90 minutes of parallel video content in an experience that lasted a few minutes.

Motion tracking, morphing, transitional effects and compositing were just some of the techniques used to make the experience seamless. While this type of storytelling is not easy, having lots of choice in a story proves incredibly engaging and rewarding for the audience when it all flows smoothly.

Stories in a physical space

Another way to break free from traditional formats is through the power and possibility of installation projects.

Installations call for a different type of thinking in trying to tell a narrative, because you often do not have control of how your audience will engage. Unlike sitting down to watch a film, an installation audience generally experiences what’s in front of them in a non-linear way.

During my time at B-Reel, our team was tasked with telling the story of Samsung’s dedication to design and innovation by creating an installation at Milan Design Week. We approached the project knowing that, although narrative is key, it does not always need to be experienced in any kind of order and should not be forced upon people in that way. 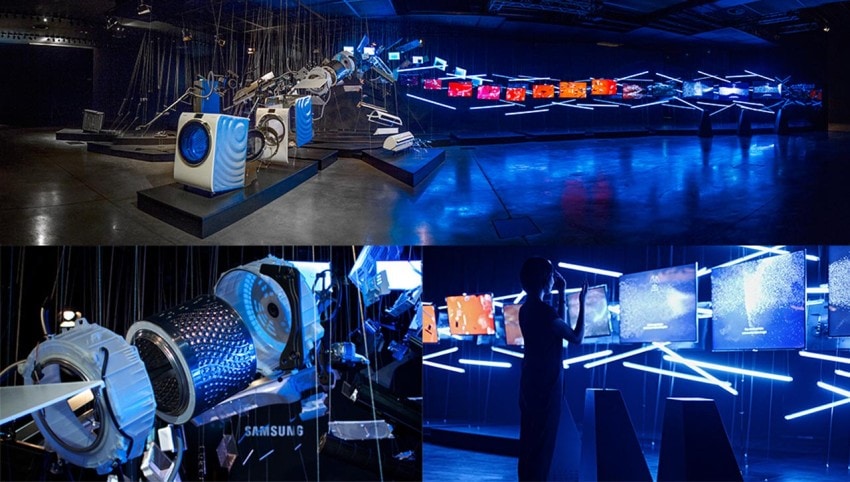 Flows – A Journey to the Future at Milan Design Week 2014. An installation that combined physical parts, lighting design, motion graphics and digital interaction to tell the story of Samsung’s innovation process.

The result was an installation that combined hundreds of physical parts, a 23,000-pixel-wide motion sequence that looped across 21 HD screens and an interactive section controlled via a Leap Motion interface.

The narrative explained how technology, knowledge, and ideas are all combined by Samsung to create the solutions for tomorrow, a future that is shaped by the users themselves.

There was no need for people to walk through the installation from a start point to an end point; they were free to explore any which way they chose. If they started at the the future section, it still worked in reverse to the present section, because the story we were telling was prevalent throughout.

Stories you can play with

More and more we are seeing interactive experiences that allow users to dynamically affect, on the fly what they are seeing, which is another great innovation in non-linear storytelling and motion design.

In the interactive music promo for Arcade Fire’s track, “Just A Reflecktor,” created in partnership with UNIT9, users were able to adjust what they were seeing on their desktops by waving their connected smartphones in the air.

Sophisticated WebGL technology and a hell of a lot of motion work behind the scenes let users enhance the linear experience with responsive effects, producing a truly unique, non-linear visual spectacle. 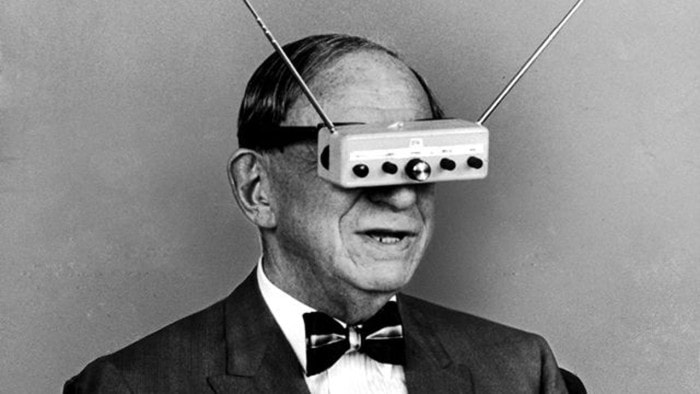 And now we find ourselves on the cusp of the ultimate non-linear medium — virtual reality.

This, in my mind, is the true game changer because of its potential to allow users to have a much broader sense of agency. VR is so far removed from linear storytelling that it requires a whole new way of thinking to develop narrative, and that’s what makes it so exciting.

It’s all about exploring new narrative logics and understanding how people will deal with such a broad amount of choice. And while we are certainly a few years away from creating the (almost) complete free-will seen in The Matrix, I don’t believe it’s beyond the realm of possibility.

The MTV graphical idents of the 80s and 90s did not make a lot of sense but for an impressionable teenage mind they were like the music itself: loud and offensive to parents.

A final (or starting) thought

It was, of course, MTV where I first laid my eyes on animation that was non-linear. Graphic artists used rich and vibrant animation to bastardise the logo and make my 4:3 television screen look awesome.

The idents and spots were saying something, but they didn’t really make a lot of sense. However, those abstract pieces of a puzzle ultimately came together in people’s minds to do a grand job of communicating what MTV was (originally) all about.

Parallels can certainly be made between non-linear stories and the way we digest visual communication. We live in a world where people move quickly and unpredictably between media environments, and brands are trying to tell their stories across varying platforms.

Given that audiences can discover content in so many different ways, content needs to be created to stand on its own while still being part of the bigger picture. This content will of course, more often than not, utilize motion.

And so, this ever-adaptable visual art form will naturally continue to be at the heart of innovation in storytelling – whichever way you look at it.