Fans of the Fallout video game franchise are no stranger to Vault Boy, the 1950s-esque mascot of the company responsible for creating underground radiation shelters that act as each game’s starting point.

For Fallout 4, Rubber House animation had the envious task of using Vault Boy to illustrate the various character attributes available for improvement as you work your way through the open world role-playing game and level up your character.

In keeping with Vault Tec’s retro style and tongue-in-cheek tone, Rubber House created seven hilarious, 2D animated shorts. We caught up with studio founders Ivan Dixon and Greg Sharp to learn about the process behind the project.

How did this job come about?

Greg Sharp It was a cold call from the agency AKQA, who we had never worked with before. We did produce a 1950’s Fleischer styled animation for a wine company back in 2012, it could have been that work that piqued their interest?

Ivan Dixon The agency already had a good idea of what they wanted to do and we were serviced with the task of translating the realistic world of Fallout into a 1950’s style cartoon.

I noticed you guys on the writing credits. That seems like it must have been fun! What was your writing process like?

ID: Rather than script driven, we opted for an outline/board driven approach — which would have been how most of the old PSA cartoons were made.

We had a big list of gameplay aspects we had to communicate, which we tried to boil down to the essentials for each episode. Some of the episodes string together in a somewhat coherent arc, others feel more like a non-sequitur sketch show.

The only thing we knew is we wanted to have at least one violent Vault Boy death per episode.

GS AKQA came to us with the Strength episode basically written and thumbnailed, and a straight up list of points we would have to include in the remaining six. Working with AKQA was great because they had big love for old school sight gags, and we all shared the same vision. We all managed to plus each other’s writing.

I’ve watched a *lot* of old instructional videos from the 40s and 50s in the Prelinger Archives. You nailed the tone of those old films! Did you guys spend a lot of time studying vintage films?

ID We watched a lot of old 50’s advertisements and early black and white TV shows like The Flintstones for reference.

When we were designing it were insistent on getting the period right. This wasn’t 30’s or 20’s floppy rubber hose style; it had to feel like late mid to late 1950’s, which is less spheres and sausages and more angular/designed.

On regular projects, you’re often guided by what looks “cool,” which can be highly subjective.

GS We work entirely digitally, so when making period specific work, we try to emulate the vintage techniques that were used at the time.

This means setting up parameters such as, for instance, the maximum number of planes that can be used in a parallax or avoiding storytelling tropes that wouldn’t have existed back then. We even went as far as making the editing slightly erratic as sometimes happens with analogue equipment.

On regular projects, you’re often guided by what looks “cool,” which can be highly subjective.

Were you guys already Fallout fans or did you have to do a crash course in the series to get up to speed?

ID I’d never played it, but friends of mine insisted it was a big deal. During the project, I got hooked on another Bethesda game, Skyrim, so I kind of knew what the game would be like and what to expect from fans of the series. I’m looking forward to getting into Fallout 4 as soon as I get some time.

GS I was always a fan of the aesthetic since Fallout 3 but have never had time to play the actual game so much.

The audio is spot on. What was your process for working with James Brown to develop that side of the project?

GS James is a long-time collaborator with Rubber House, and we entrusted him with the sound design, music, and degraded audio treatment.

Chuck Jones advised to never mix music and sound FX, and we followed this advice to a certain extent. However, these weren’t fully-fledged cinematic shorts, so our aim was to simulate the score that a 1950’s Public Service Announcement produced on a middling budget could afford.

Let’s talk a little about Rubber House. Are you guys developing your own intellectual property?

ID We’re currently producing a pilot for our own animated series for Cartoon Network. It’s called “Lasso and Comet,” and it’s about a boy with a magic rope who’s best friends with a comet. They team up to protect islands from giant monsters in a prehistoric fantasy world. It’s kind of a throwback to 70’s anime. 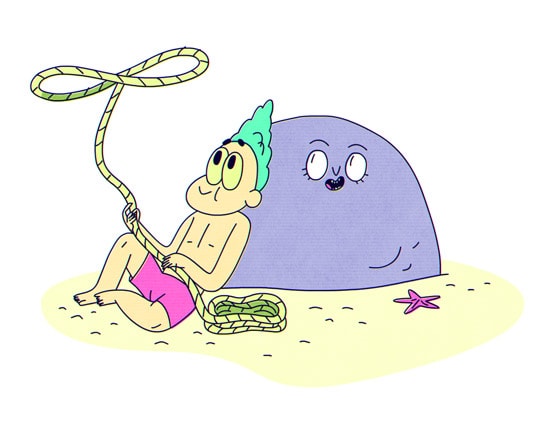 We’re really excited about this one! We’ve been working hard to get the right mix of comedy/action/adventure/drama. We’ve also got a lot of the same team that worked with us on Fallout.

GS Other than the pilot, we’ve become interested in the prospect of adult animation series, so we’re developing certain ideas to bring to market eventually.

Developing your own IP is a tricky business. Sometimes, it could pay off in a big way and within a short period, while other times it will go nowhere, since these pitches are not of a scope that can be accomplished without backing.

How’s the animation industry in Australia?

ID There’s a tonne of talent down here, but the industry isn’t very established or robust. Most animators either work independently as freelancers or end up relocating for more permanent work. Rubber House gets most of it’s work from overseas, mostly the US.

GS We feel we’re part of the international animation industry because, for us, our location isn’t an issue. Working remotely with clients (as distinct from outsourcing) has become the norm.

Where would you guys like to take Rubber House? Keep it small — or are there dreams of world domination?

ID A question we ask ourselves frequently.

This Fallout project saw us assemble the largest crew we’ve had to date. We’re both interested in longer form narrative based projects, such as series and even features. If either of these eventuate, we’ll obviously have to expand to a larger, more permanent crew.

Currently, we have total control over the projects we take on. If we expand, we’ll no doubt need to take on more work to fuel the beast that is a larger company. There’s pros and cons in both directions.

GS We’re a 5 year old company, and the last two years in particular have seen many changes in our production technique in response to changing market tastes. We recently spent time in Los Angeles and it broadened our understanding of the animation industry and our potential place in it.