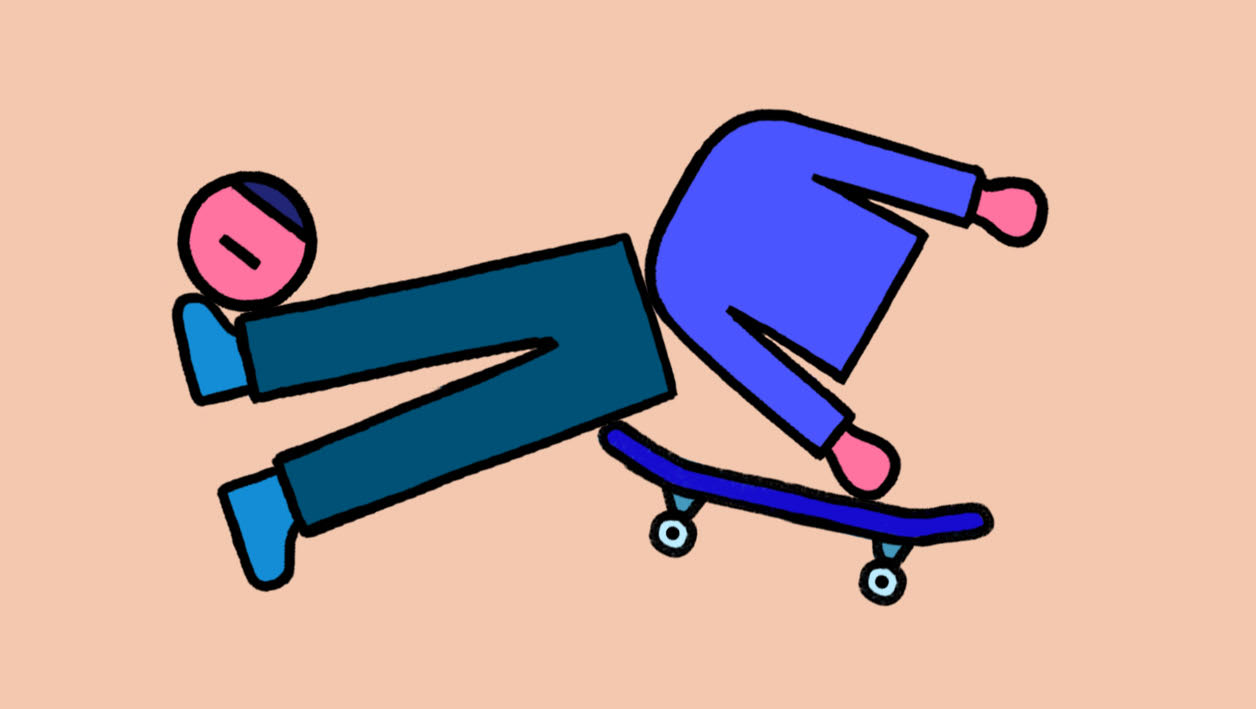 Vincent Tsui is good… and I mean really good… To say our industry is saturated with 2D content is an understatement. In this climate, it can be hard to rise to the top given the level of work being produced on a daily basis.

When I first became aware of Vincent’s work, I was immediately taken aback by how complex it was. Vincent’s work is simple yet smart, bright but not garish, optimistic yet heavy. With each new piece that Vincent touches, I find that his voice becomes stronger and the work becomes unmistakably his own.

There has been a lot going on in Vincent’s life these past few months, from making the move from Paris to LA, starting a collective to now diving into the world of commercial work. The following is a Q&A to find out a bit more about him, his thought process and how he is coping with all these life changes.

First, can you tell us a bit about yourself?

I was born 25 years ago and raised in France, in the Parisian suburbs. I started drawing seriously because of Yu-Gi-Oh!, can’t you tell? In parallel, I became very passionate about skateboarding and urban culture in general. Then I moved to Paris where I studied graphic design and animation at Gobelins. I graduated last year and I’m now working in Los Angeles.

What has that experience been like moving from Paris to LA?

Good overall! Really can’t complain, it’s been great so far. I needed change and Los Angeles, as a city, is radically different from Paris, to say the least. Paris is dense, hectic and grey whereas LA is more spacious, slow-paced and greener. But despite being different from Paris, I think LA is different from any city, it’s such a unique place. It’s a city of extreme contrasts, which I personally find very inspiring for my work. And not to mention that skateboarding was born here… I can feel the spirit all over the city!

What do you miss the most about Paris?

The list is long but on top of the list, everyone I love there, family and friends. Especially with all the shit that’s going down in France right now, it can be hard to be far from them sometimes.

And your favorite aspect of LA so far?

I can’t get tired of LA’s spectacular light. I’m always as amazed of how beautiful this is every day… Ah so cheesy! But man you cannot stay indifferent to this.

Creatively, how would you compare the two scenes?

It’ a pretty big question! I’ll try to make it short… From what I’ve observed, in LA, the presence of giant studios (Dreamworks, Cartoon Network, etc..) has a significant influence. It generally feels more formatted and less creative, in my opinion. But on the other hand, it feeds this very interesting and antagonistic reaction that is “Experimental Animation”. It’s basically just independent animation but the desire of freeing themselves from the common narratives and looks of classic American animation is so strong that it can get pretty crazy. It’s a city of extreme contrasts, I’m telling you. As far as Paris is concerned, I’d say there isn’t such a big separation between “Character Animation” and “Experimental Animation”. Overall, people are just making animation the way they like it, which feels more organic and less limited. It’s harder to put it in a box, which is a good thing I think.

If you could, what would you change in each?

I don’t think I would change anything really; I want people to keep making. Ideally, I would love for everyone to have the means to make what they actually want to make. In a perfect world, the money wouldn’t primarily go to big studios and commercial productions but also help support the world of independent animation as well.

In a perfect world, the money wouldn’t primarily go to big studios and commercial productions but also help support the world of independent animation as well.

Recently, you made the shift from working on predominantly independent art projects to now working commercially. What has been the biggest adjustment for you?

Well, working for someone other than yourself can be hard to adjust, obviously. But I think it’s important to keep in mind it’s a job. It doesn’t mean I’m not doing it well, I just try not taking anything personally and I attempt to avoid caring too much about the work I make for clients. Anyone that has worked commercially knows how easily a client can just crush your hopes and dreams. So I keep those for my own projects at home.

In addition to working commercially, you’re also one of the founding members of the Souviens Ten-Zan, otherwise known as STZ. Can you tell us how forming STZ came about?

Yes indeed! Great name, isn’t it? I always like when english-speaking people say it. We (we are 12) were all in the same year at school and shared common interests in animation. In addition to being good friends, we started working together and made two little projects: Oh Shit! and Mother Fucking Dalle. Since then, we kept working together at school and outside of school.

What makes STZ, and collectives in general, important to you as an artist?

Because it’s cool, no? Just kidding, but not really! I think being part of a collective is important; when there’s good chemistry the feeling of making good work with good friends is pretty amazing. It makes so much sense in animation to work as collectives, the amount of work is so huge that being able to join forces makes it way easier and ultimately more rewarding.

What types of projects is STZ currently looking to take on?

Any types of projects really. We have various types of profiles in the collective which allows us to practically make anything we want, visually and technically.

Moving on, your film Made in China has been really well received! It’s one of my favorite short films in recent memory. Can you tell us a bit about making that film and the thoughts behind it?

Thank you for the kind words, really means a lot! Made in China was my graduation film, I had the chance to make it during my semester exchange at CalArts in beloved Valencia. It was definitely a challenge as this was my first individual film. But after working a lot in groups at Gobelins, spending hours debating on ideas, trying the satisfy everyone’s ego, wasting time on the smallest details, to eventually get an okay result, it was selfishly very liberating to finally work on my own. And unlike Gobelins, CalArts was offering complete freedom. So the main idea was to have fun making that film. I wanted it to be simple and unexpected. The result is basically just me playing with my wooden toys. At first, I didn’t mean the film to have a deep meaning or anything, it just ended up feeling that way. I wanted it to be light and fun but I realized my humor wasn’t… I’m really glad the way it turned out and how it was received. It’s always pretty hard to make something you are proud of and for it to stand the test of time. It’s already been a year now and I still don’t hate it!

What was the hardest part about making Made in China?

Well, Made in China is definitely not a technical masterpiece in terms of animation as you can tell, so I thought it was a good opportunity to try animating in Photoshop. The main argument is always that you can animate in the same software you’re the most familiar with, and it made sense because I wanted to keep that painted look on animated parts. Boy was I wrong. Photoshop is the worst for animation! Thank god the animations were basic, I can’t imagine what it’d be like with complex ones. Even using scripts that make it easier, it kept fucking up my timings for no reason.

Despite the fact that Photoshop was a pain in the ass for animation, I wanted the film to look like animated paintings so I made everything in there and that’s it. The same way you would make a digital painting. I only used After Effects to edit the whole thing together but there’s no compositing whatsoever. 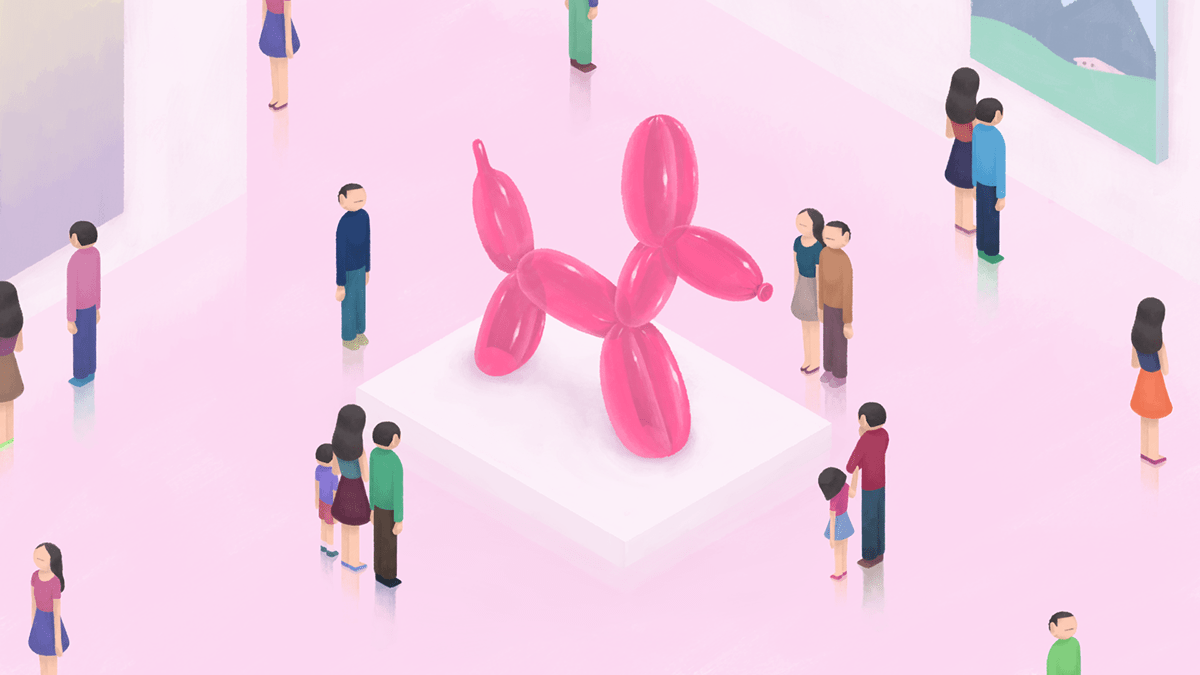 Your work has a certain duality to it. Using Made in China as an example, it’s bright, fun and saturated, but tells a pretty somber story. Throughout your work there seems to be a certain level of discovery and surprise. Is this something you strive for/how do you want your work to be received?

Yes definitely! I think you pretty much got it, but I am still trying to figure it out as I evolve as an “artist” you know… What I can tell you is that I am fascinated by contrasts in general. I like seeing very different elements combining and creating unexpected and mysterious results. The same way a metaphor would work. Actually, it’s like very good rap music. Being a huge fan of French rap, a great punch line is everything I want my work to be: surprising, smart, beautiful, ironic and provocative. It’s something you get thrown at your face that’s very satisfying, it’s the way I feel about French rap. Here are two examples of what I mean:

It doesn’t necessarily translate the best in English but you get the idea. I like how they get stuck in your head. I hope my work can get as haunting as they are to me, someday…

Thinking big picture now, if there is one thing you could change about the animation industry or how animation is received, what would it be?

I think the only way we can change the animation industry is if we change the way animation is received. I wish Animation was considered as a more serious art form, it’s still perceived as entertainment for family/kids. But mostly because previous generations grew up watching Disney movies and cartoons on TV. I feel like the next generations might be different because they’re exposed to various forms of content on the internet. Independent animation, for example, is much more accessible now than back in the days. Actually, the whole Animation scene is pretty exciting nowadays. I feel pretty optimistic about the future. Let’s hope for the best!

Finally, what is next for you?

If only I knew! Hopefully good things. As of now, I will be staying in LA and working on personal projects on the side.

Many things! Already working on lots of projects simultaneously. We want to make more independent projects in the future but right now we are focusing on this little series called STZAP. It’s a stupid thing, but it’s a way for us to release all the frustration!