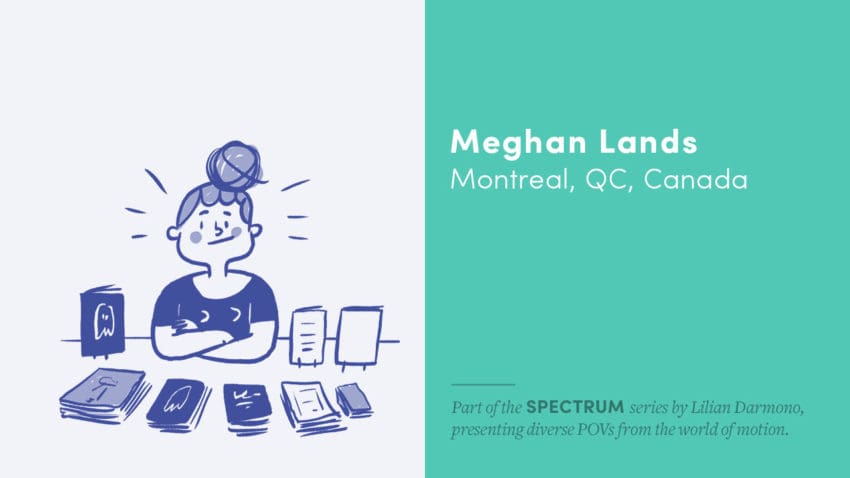 This issue of Spectrum, I spoke to Meghan Lands, a Canadian cartoonist and storyboard revision artist working on animated television content in Montreal, QC, Canada.

Meg grew up in Montreal, the only child of a single mother, and went to Art School for her tertiary education. According to her, the primary benefit she got out of art school was practice being comfortable with her status as an ‘outsider’ – both because she identified as a cartoonist in the art world and because her professors often didn’t understand her work or think it was valuable.

She learned to improvise as she went, doing what she wanted, despite breaking norms and expectations.

At her work, scripts are given out to storyboard artists (often external freelancers). When the boards come back, it’s the revisionists’ job to fine-tune them into a finished product that’s perfectly consistent with the sentiment of the show.

The job can be harder when the board artists are less in tune with the show’s personality. In some cases, large portions of the storyboard need to be reworked, in essence requiring the revisionists to ‘write’ content as they go.

Meghan explained that this is one aspect where comic artists like herself have something unique to offer compared to traditional animators. They’re used to working fast and are trained in telling stories, inserting gags and adjusting the pacing to create a more impactful final board. This trend of bringing cartoonists into animation production started with Adventure Time, and it has continued ever since.

I asked Meghan what advantage animators might have over comic artists in animation production. She said that, besides the familiarity with the medium and work environment, animators are more accustomed to working as part of a team, whereas comic artists often work in isolation.

Speaking of working in a team, we went on to discussing her experience being one of the few women working in the studio. What emerged is a certain kind of wisdom — a survival strategy, if you like — that I know many women can agree with.

Firstly, although she admitted to being exposed to the “garden variety misogyny” and microaggressions in her daily life such as inappropriate sexist jokes and comments, she also pointed out that in real life, there is no black and white.

Often, the same people who are being misogynistic can also be kind and helpful to her. With that in mind, she’s chosen not to engage any of them in deeper conversation on equality and political correctness.

“Being a constant advocate for yourself, let alone for anything bigger than yourself is exhausting,” she said. Alluding to how difficult it is to convince someone that an issue they’re not familiar with or interested in is important, Meghan summed it like this: “If you’d wanted to know, you would have already asked.”

At the same time, Meghan admits that in her life and career, people often don’t take her seriously, something she attributes to her physical appearance.

“I’m short, I’m a woman,” she said. “I have the voice of a small child. So I am often underestimated, shall we say.”

This ranges from going to conventions where people assume she’s ‘The Girlfriend’ instead of a fellow artist. Or going on a date with a male animator who spends an hour telling her how her job works. Or being overlooked due to her not being particularly ‘macho’ or ‘serious.’

She talks about encountering the “baseline assumption that I cannot possibly know anything.” 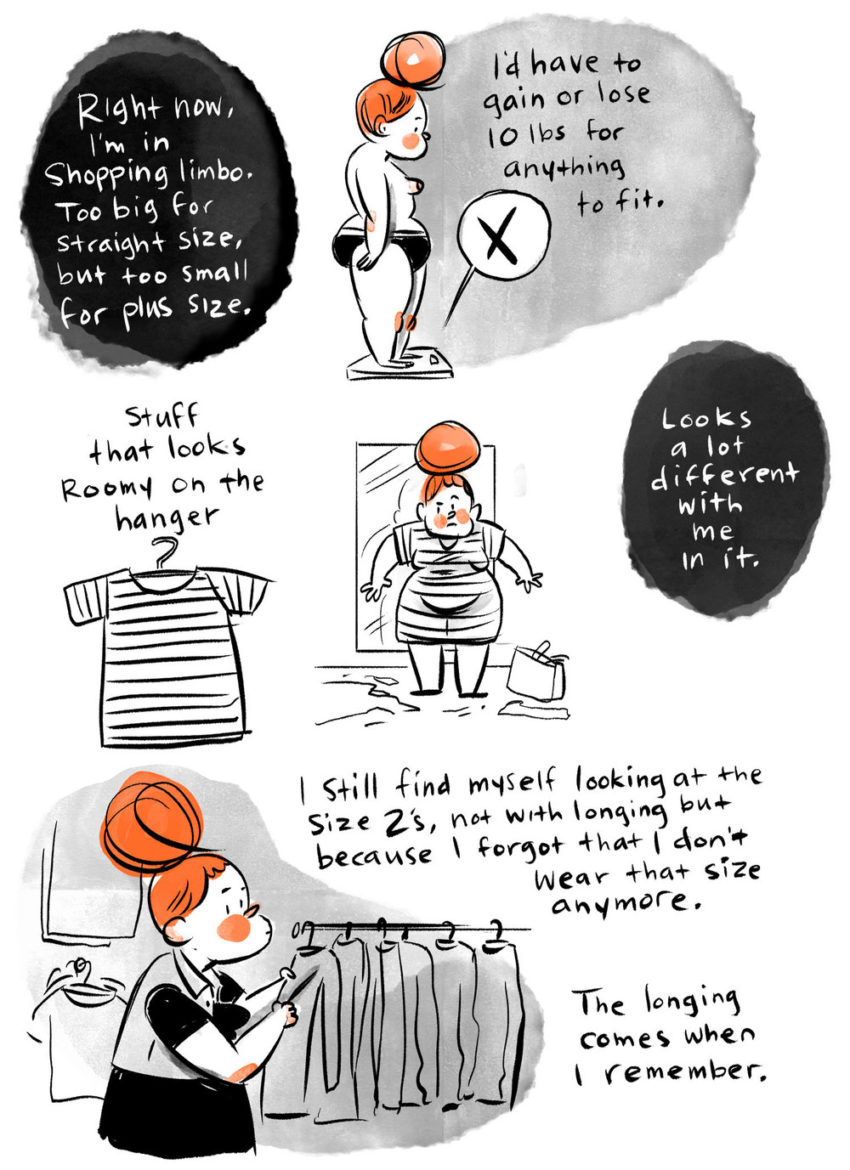 As such, she’s had to make an effort to be “extra-present” in everything, from work meetings to industry events to overcome this constant theme.

When I heard this, I brought up Bonnie Marcus’ advice to abolish weak language in workplace conversations, as outlined in this Forbes article.

Meghan offered a very interesting take on the whole concept, arguing that in a way, doing this is can mean a loss of one’s identity. It’s merely reinforcing a certain gender-biased attitude.

”I don’t feel I should necessarily have to play by the rules of a broken system. I see this as micro-patriarchy basically, and patriarchy doesn’t serve anybody. Conducting myself in what I see as a more ‘macho-bullshit’ way is not a job I have.”

Meg went on to point out that misogyny can come from another woman, too, something she’s learned from personal experience. In such cases, she feels that compassion is as important as standing up for yourself.

“I get really frustrated with anybody who’s an enforcer of the patriarchy,” she said. “But I have to remember to be sympathetic, that these are the women who drank the Kool-Aid, and at one time I was like them too.”

The importance of fan mail (and mentors)

Going on to challenge assumptions about gender-related role models, she observed that many opportunities in her life have actually come from men.

For instance, a comic artist she admired, who happened to be an older, straight white man, brought her into her current job and nurtured and guided her. He became her mentor.

“It is not lost on me that these are men who are older and more established than me, who instead of passing the baton to someone who looks like a younger version of themselves have chosen to nurture and provide opportunities for whatever it is they see in me. That’s really significant.”

It’s important it is to take the first initiative, she said. That leads to opportunities.

In the case of her mentor, she’d been following his work for a while before she introduced herself to him at a convention, giving him copies of her most recent work for his critique.

She kept at it, and when a job opportunity came up on his team, he showed the hiring team her work, and she landed her current job as revisionist in that studio.

The other side of taking initiative and reaching out for opportunities is, of course, failure. Meg has a great advice on how to handle this, too.

As an artist, she frequently applies for grants and residencies. She makes a point of applying for many of them at the same time. If she gets rejected, it doesn’t feel like a big deal because “everything is less important when you deal in volume.”

She added, “If you’re going to fail, just do it a lot and really quick.”

Her persistence and hard work has paid off. Never having travelled overseas before, she’s always had her sights set on Japan. After searching for the right opportunity, she secured an upcoming residency in a town just outside of Tokyo, which coincidentally takes place in between her work contracts. 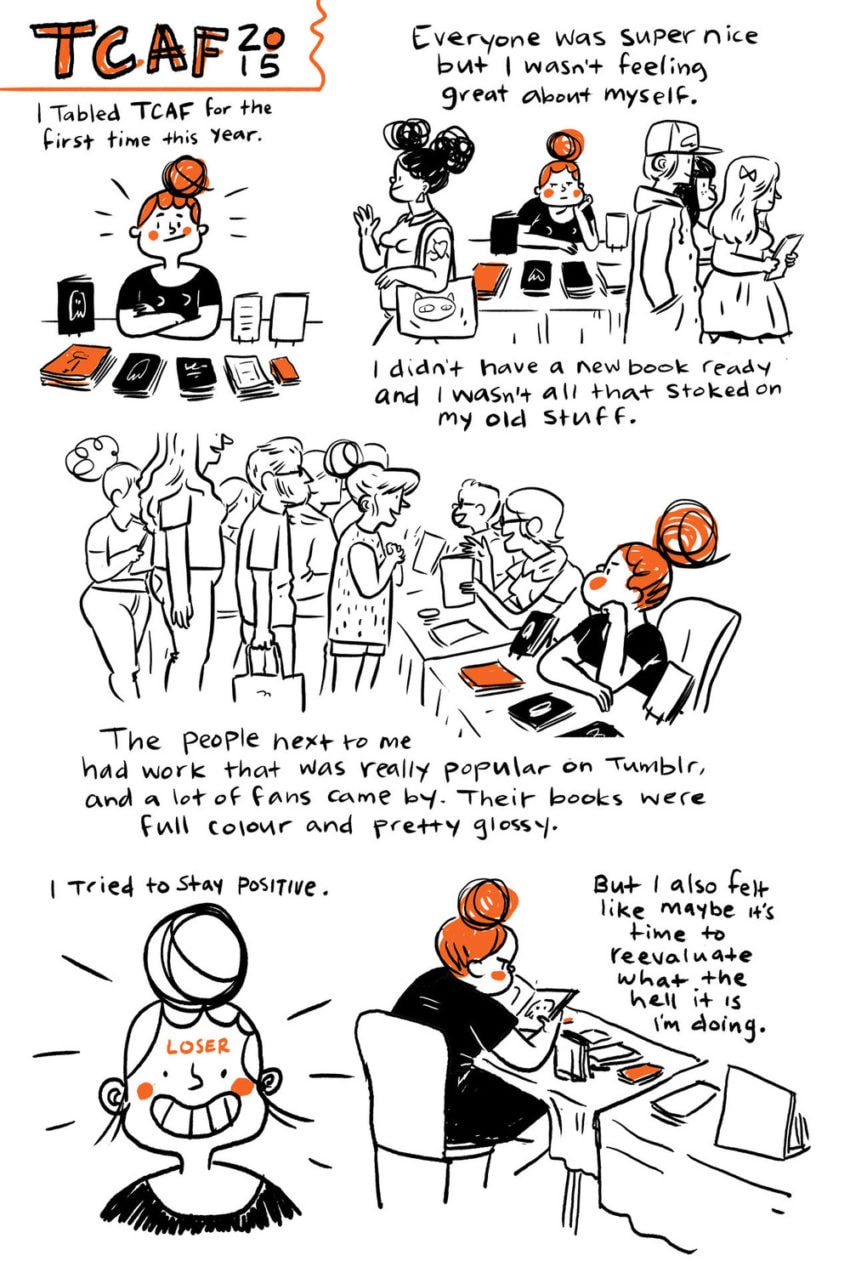 For all these great stories of initiative and assertiveness, Meg confessed to having a great amount of social anxiety. Rather than hide it, she’s decided to make it public through the comics on her blog as a way to overcome it

“I feel that I can diffuse that anxiety by announcing at the outset that I’m anxious, especially in social situations!”

The comics address a variety of topics: body image, insecurity, loneliness, friendship, and so on. I find them honest, poignant and really moving. A lot of them really stayed with me long after I’ve read them.

I’m not the only one – many have written appreciative emails for her courage in bringing these issues to the fore. Through her work, Meg has inadvertently ended up helping a lot of people who have similar issues — not a bad measure of success at all, as far as being an artist is concerned.