It’s worth noting that Buck is by no means the only company right now exploring AR or new technologies at the moment.

There are plenty of studios developing games, tools, and various forms of original content. Like with most things though, what sets Buck apart is their attention to detail and the way they approach new projects. Whether it is investing hundreds of thousands of dollars into passion projects or in this case, exploring new technologies, you’ll rarely find a half-measure from the folks at Buck.

Slapstick is no exception. In the world of AR where everyone is seemingly waiting for someone else to “crack the nut” and unleash the potential of the medium Buck has stepped to the plate to bring us their unique sensibility and world-class design and animation to the realm of mixed-reality.

First of all, congrats on the launch of Slapstick! For the uninitiated, what is Slapstick and how does it work?

Kevin: Slapstick is a camera app that leverages AR tracking to let you attach animated stickers to objects and surfaces. It lets you compose an augmented scene and then record a kick-ass film to save or share.

Our goal for the app was to mash together our love of lo-fi design (flat-graphic animations) and hi-fi smarts (AR, spatial sound, smart placement paradigms, and interactive stickers).

Can you tell us a bit about how this project came to be?

Ryan: We have been working on VR and AR projects for clients like Instagram, Facebook, and Google for over a year; and as we continued to develop teams to work in this medium, we became increasingly interested in its possibilities. Slapstick started as an idea that Buck CD Kevin Walker, who has been spearheading our AR work, came up with. He pitched it as something fun for our designers and animators to work on as a creative side project, so they could all have an opportunity for some self-expression while gaining experience working with AR. The thought was that we would build the app and put it up on the App Store, and just populate it with stickers as we made them.

After we got into the process and the app started to take shape, we collectively realized that it had some real potential as an app that people would have a lot of fun using to jazz up their social media posts. So we started to dedicate more of our time and energy towards creating something that was as well thought out and professional as anything that Buck creates. At present, we are super happy with how it turned out and the responses we’ve received. We actually have some pretty big plans for Slapstick in the works and are excited to see where it all leads. 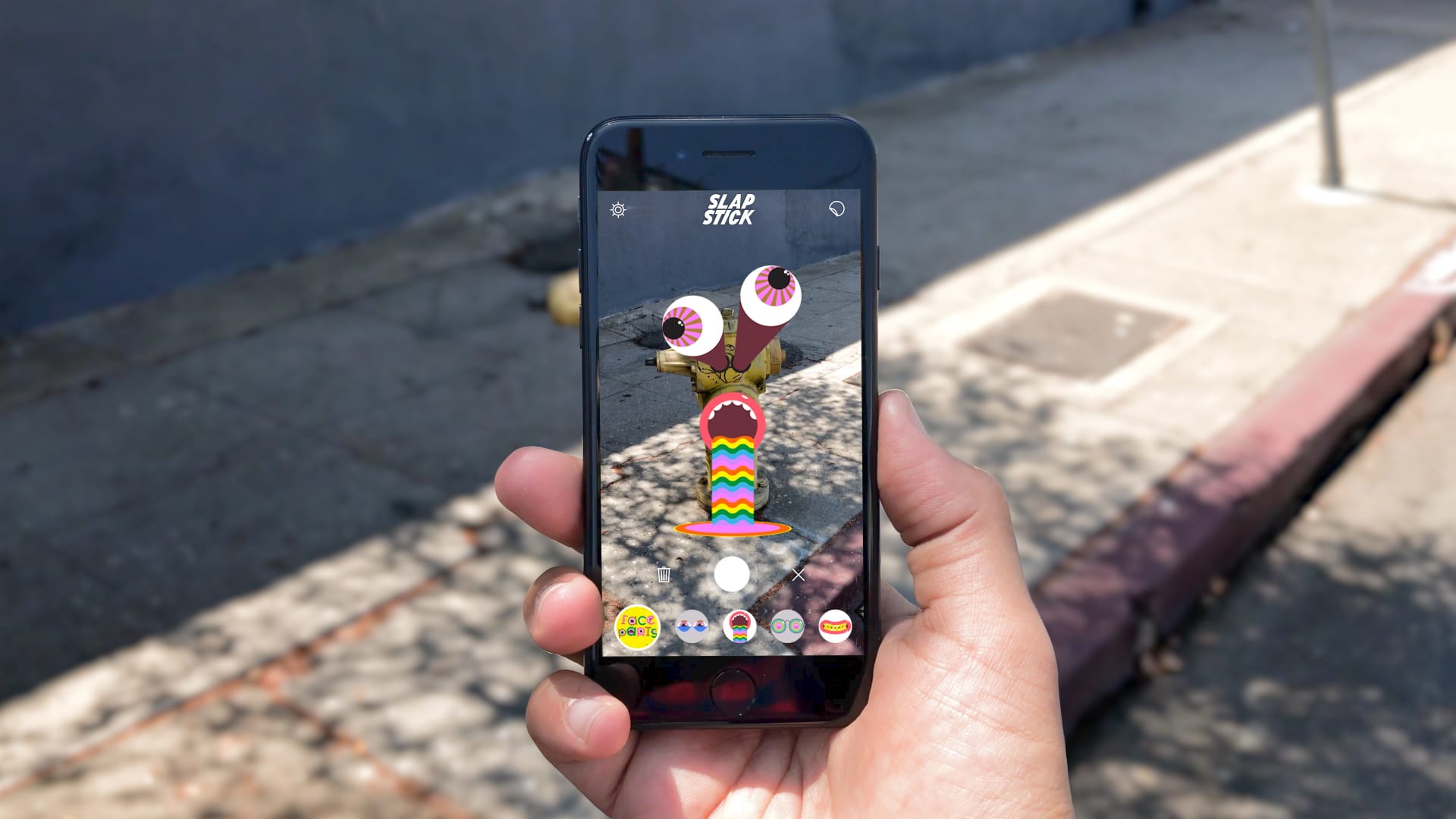 So this is kind of a big question but, why AR and why now?

Kevin: AR on your smartphones is a really young technology, it’s hard to remember but puppy-eared selfies are only a couple of years old. Younger still is the ability to drop things in space around you and have it ‘stick’. This tech only went mainstream with Apple’s surprise introduction of ARkit a year ago. At that point we had already been working with Google on it’s now retired Tango platform and had come to believe in it as an effective storytelling technique.

AR is different than VR, yes there’s overlap, but AR isn’t dropping you into another universe. It’s more like post-it notes over your world. The best AR is a comment or augment of what’s around you.

This idea of ‘tweaked-reality’ will be our future at some point so we figured why not get started. More immediately, making something where we’re not in control of the final output has been freeing. In this way, the app feels very ‘of the moment’ by providing another tool for people to create with—after all…everything is a remix.

What was the production of this project like and how long have you been working on it?

Kevin: We birthed the idea in late night rap battles last fall but didn’t kick into active development until early April of this year. The project was positioned in and around our other work, whenever we had a free moment we picked back up with development.

We’ve had two main tracks within the project: content creation and app development. Content creation has been a bit faster because we can turn on our spigot of talent from all three offices. App development is done by a smaller team with longer cycles to ensure we are giving the app enough time to mature. Building an app where the design was separated from development allowed both pursuits to move at their own pace.

Buck is obviously well versed in staffing and producing commercial productions. Were there any major differences here working in such a new medium with, I imagine, many more unknowns?

Kevin: Dipping our toes into making shit-for-yourself has felt great but meant we needed to know when we were done. In engineering, they call the first version of a product an MVP, which may sound heroic but really means minimal-viable-product. The first version of the app is our MVP, which is a huge accomplishment for us. Get an MVP out as soon as it’s ready or you waste time on things that aren’t important.

Over the last few years, we’ve moved into long-term projects that have gotten us acclimated to developing, nurturing, and iterating on our work. App development feels like an extension of this process: start with an idea, build to it, have frank assessments about what is and isn’t working and then go back into another cycle.

We used design by iteration to refine our user experience and flow. How do you place something? How do you decide what is sticky? How do you fail gracefully when an intended placement doesn’t work?

What does and doesn’t work only becomes apparent when enough hands are trying something. Intuitive to one person is problematic to another, testing and feedback was the surest way to work through these challenges.

For anyone interested in getting into the world of AR, what would you say is the biggest barrier to entry?

Kevin: ARkit and ARcore (Apple and Google’s competing AR frameworks) are developing fast. There are a lot of brains working on AR that unlocking incredible experiences faster than anyone expected. For us who aren’t yet in the future, there are ways to experiment in AR right now. Snapchat has an intuitive app for making AR lenses and Facebook has an app for making its AR filters. In addition, Unity and Unreal have integrated ARkit and ARcore into their products.

AR experiences don’t have to be built from the ground up with code, they are accessible now utilizing well-known tools and pretty good documentation. At this point, the barrier to entry is pretty low!

In that same vein, what was the biggest limitation you faced while working on the app?

Kevin: The biggest limitation we faced while working on the app was waiting for features to come online or having to solve around the current limits of AR tech. 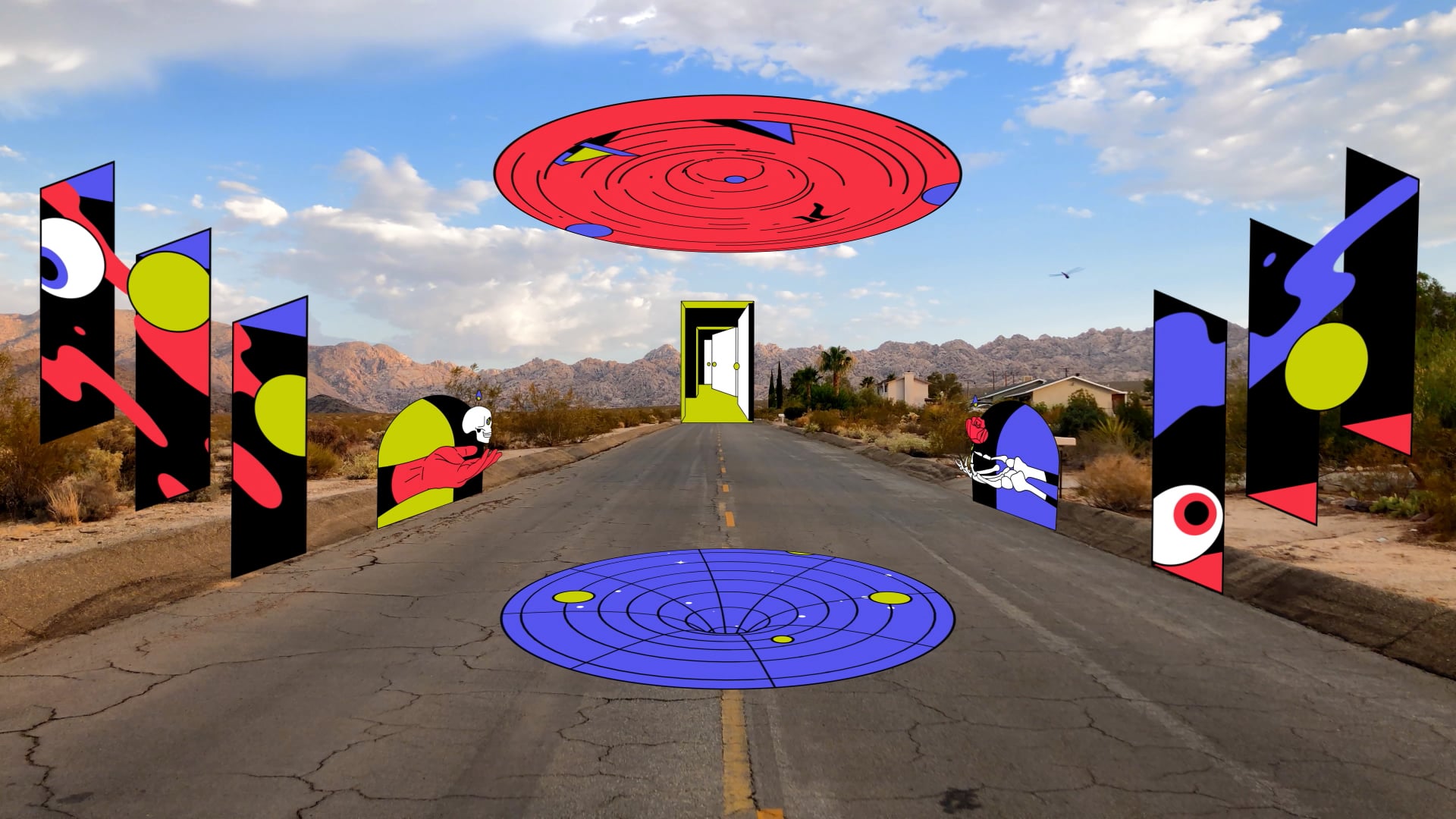 So another big one here, at every conference and event the big question seems to be “What’s next for motion design?” AR and VR are tossed around quite a bit here. What do you think the future of our industry is and how do you see this whole AR/VR thing contributing and/or changing the work we do?

Ryan: Obviously, our industry has changed tremendously over the past few years. Screens are continuing to proliferate and every one of them needs motion design in some capacity. As we move away from the television, marketing is taking on new forms—from experiential to VR. But right now AR is the new hype and if you look at what people are starting to develop, you have to imagine a future where we experience a mixed reality on a daily basis, if not all the time. This will potentially be the only screen you will ever need feeding you content, experiences, marketing and information. I think this means that our industry will only grow as the use of static messaging becomes a thing of the past, while motion design and animated content will be an extension of our reality.

Lastly, traditionally Buck fits into the mold of a production company. You obviously do a lot more with self-funded projects, but Slapstick is something new. You’re dabbling in new technologies, intellectual property and breaking the mold a bit. Is this a sign of things to come and should we expect more awesome projects like this from Buck?

Ryan: Yes. We have been very fortunate to be able to build a formidable creative force and culture across our three offices, and we have always wanted to use this to create some IP-based projects. There are more in the works, so stay tuned for more announcements soon!