Editor’s note: The online landscape of the motion design industry is constantly changing. From the days when Creative Cow and Mograph.net reigned supreme to the community that formed around Vimeo and beyond. Today, there are dozens of sites centered around the world of motion design, from educational sites and resources to the next wave of forums such as Mixed.Parts and Keyframes. There is seemingly something for everyone these days! Motion Hatch is a perfect example of the new breed of sites that have formed in recent years. With a focus on community that has now expanded into empowering individuals through the business side of our industry, we wanted to find out more. The following is a Guest Post from Motion Hatch’s founder, Hayley Akins, on where Motion Hatch came from and where it’s going. 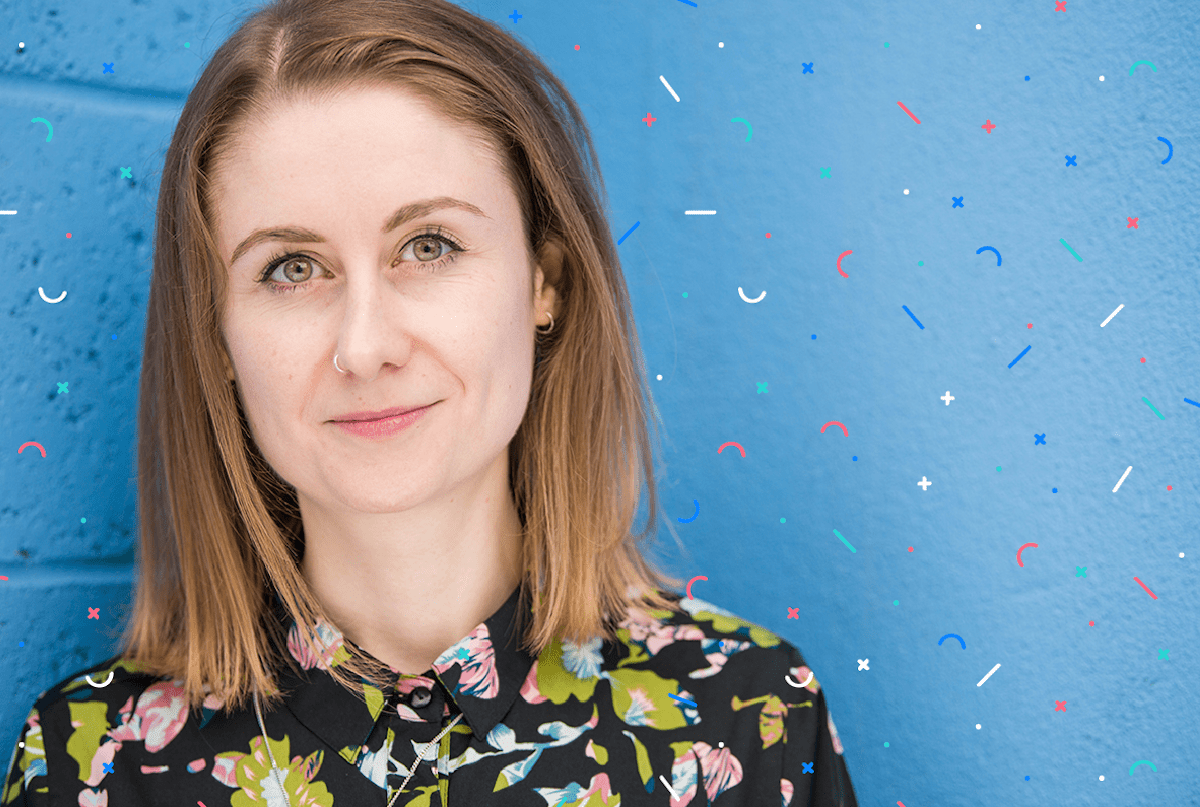 My path to freelance

When I started out as a motion designer I thought that I wanted to be an art director at a cool animation studio. I looked up to companies like Buck and Psyop. It seemed like that was what everyone aspired to. But my career path unfolded in a different way.

After working full time for 7 years in various motion design jobs, pulling many all-nighters and leading some big teams, I decided I wanted to go freelance. I had worked with a lot of freelance motion designers, and I liked the idea of being able to choose where you work and on what projects. Freelancing isn’t always that easy, but from the outside looking in, sometimes it can feel that way. Even after being in the industry for a while, I was still pretty terrified. I wanted to make the move for around 2 years but wasn’t able to pluck up the courage. I was worried that I wouldn’t be good enough. 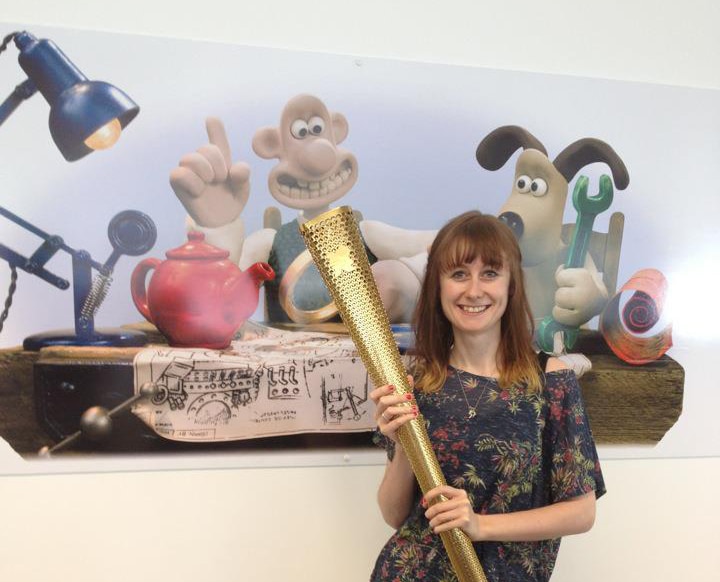 Hayley holding a Olympic torch whilst working full time for Across the Pond at Google in 2012.

There wasn’t any information online about freelancing as a motion designer. The Freelance Manifesto wasn’t out yet, nor any of the Facebook groups we have now. I would buy my freelance friends drinks, ask them what they charged and how they ran their businesses. “It would be good if someone put this information out there” I thought to myself at the time.
Hatching a plan

One of the main things I enjoyed about freelancing was the challenge of finding clients and trying to solve their problems. I was shocked to find out that many freelancers had been charging the same day rate for 10 years. As freelancers we are constantly learning, growing and developing our skills – and our rates should reflect that. I remember thinking “If everyone else gets regular pay rises why not freelancers”, It made no sense.

In 2016 I joined Location Indie, a community of location independent business owners and freelancers. It helped me to learn about loads of new things like how to build community and how accountability is so important when setting goals. This enabled me to see how I could start to add value to the motion design industry.

I met my future podcast editor through Location Indie. He suggested a podcast could be a good place to open a conversation up about the business side of motion design. This was a big turning point for me. The podcast has given me a platform to voice my thoughts about the industry and invite guests on to share their knowledge.

When I began planning my podcast I felt like an imposter, how could I be a host? Similar to when I went freelance, those feelings of slight dread and anxiety started to pop up. When I did my first interview I felt like I was playing make believe. Like a child pretending to be on the TV interviewing someone. I was very nervous, but I tried not to compare myself to others and just be me. One of my biggest worries was how to get people to agree to come on the show, especially before any episodes were released. I started with a few people I had worked with like Lilian Darmono and then branched out from there. I expected everyone to say no to begin with, but to my suprise pretty much everyone said yes. 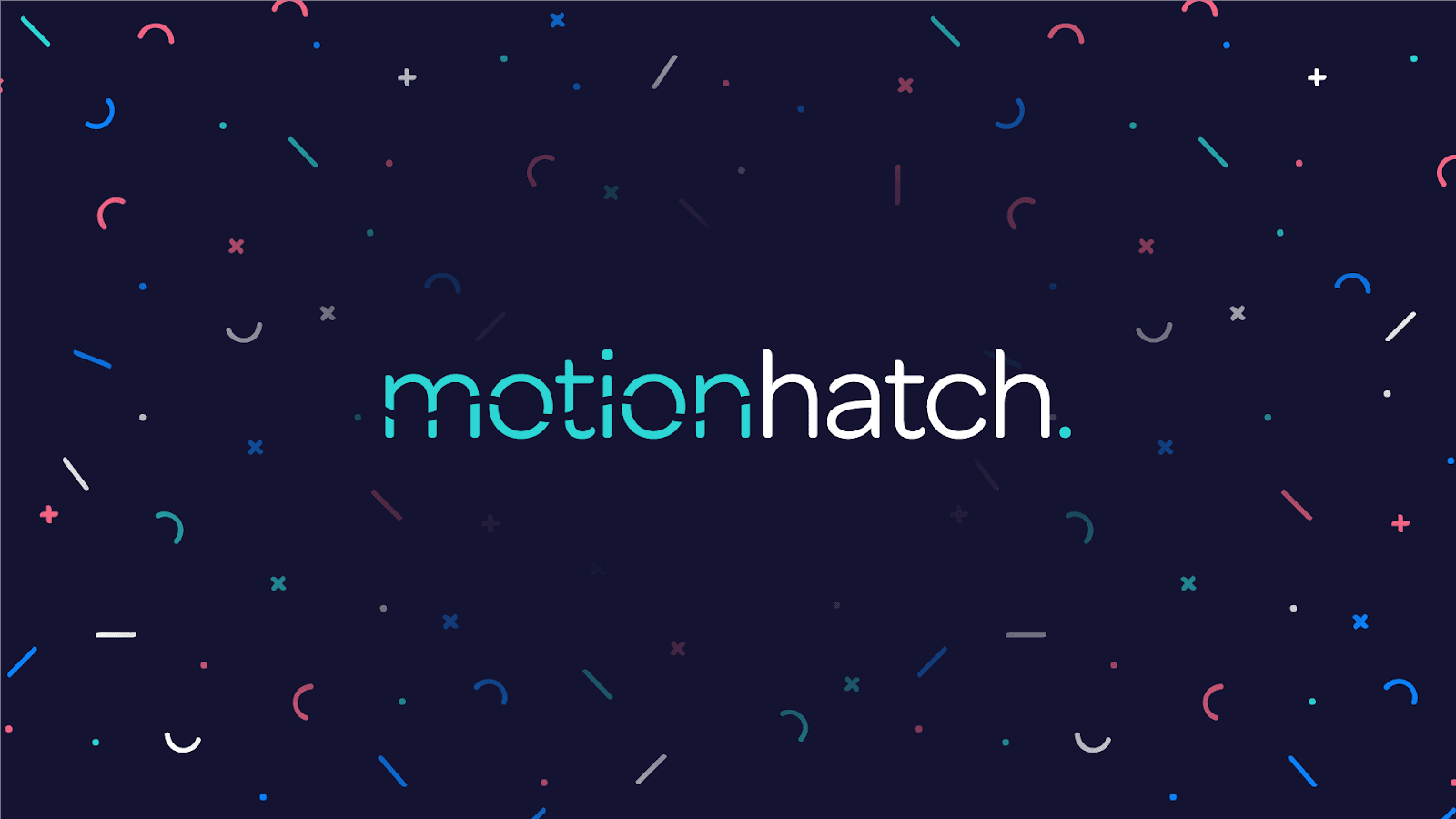 It took a lot of encouragement from the people in my community for me to start Motion Hatch. Without that support, the fear of failure could have kept me from starting anything at all. Most people have doubts like this, and it can easily stall your progress. I’m glad I didn’t listen to that tiny voice in your head that tells you “you aren’t good enough”. I’ve met so many exciting new people and had some great opportunities.

In my career, I’ve found that the greatest rewards come from getting past the obstacles that scare you the most. If you feel scared about doing something, try leaning into it and see what happens. 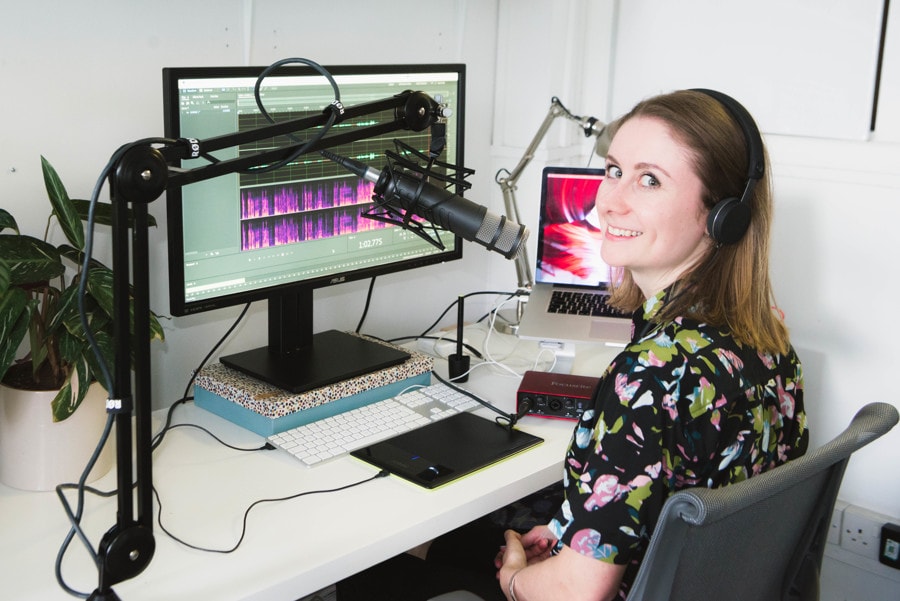 Don’t compare yourself to others (too much).

It’s human nature to compare ourselves to others, especially since now we only see the best of everyone’s lives on social media. It can feel like everyone else has their sh*t together and we don’t. I mean how are they posting everyday on Instagram!?

Instead, it can be more productive to look at ourselves. Comparing current and past work can help us to progress and redefine our goals. Look at how far you have come, assess the level you are at now – and feel less like an imposter.

Recently Tom Davis, who runs Loop, posted a comparison of his reel from 2010 and 2018 and shared the following on the Motion Hatch Instagram and then on his blog:

“I think it’s pretty common in the world of motion design, and the field of design in general, to focus too much on what the competition is doing. To look at the work of another freelancer, or another company and think “man, they are killing it, how can I change to be more like them!?” or “how did they land that client!? Am I not good enough? Maybe I should do more of what they’re doing”. We take this little excerpt of finished work, and with no knowledge of what’s gone on behind the scenes, judge our own work against it.”

Talk to the community

Having spoken to lots of motion designers at many different levels on the podcast, I have realised that no one is perfect. For the most part everyone is just trying to be the best version of themselves. Everyone struggles with things like work/life balance and actually getting things done. Most people are very happy to chat to other motion designers, no matter what stage they are at in their career. 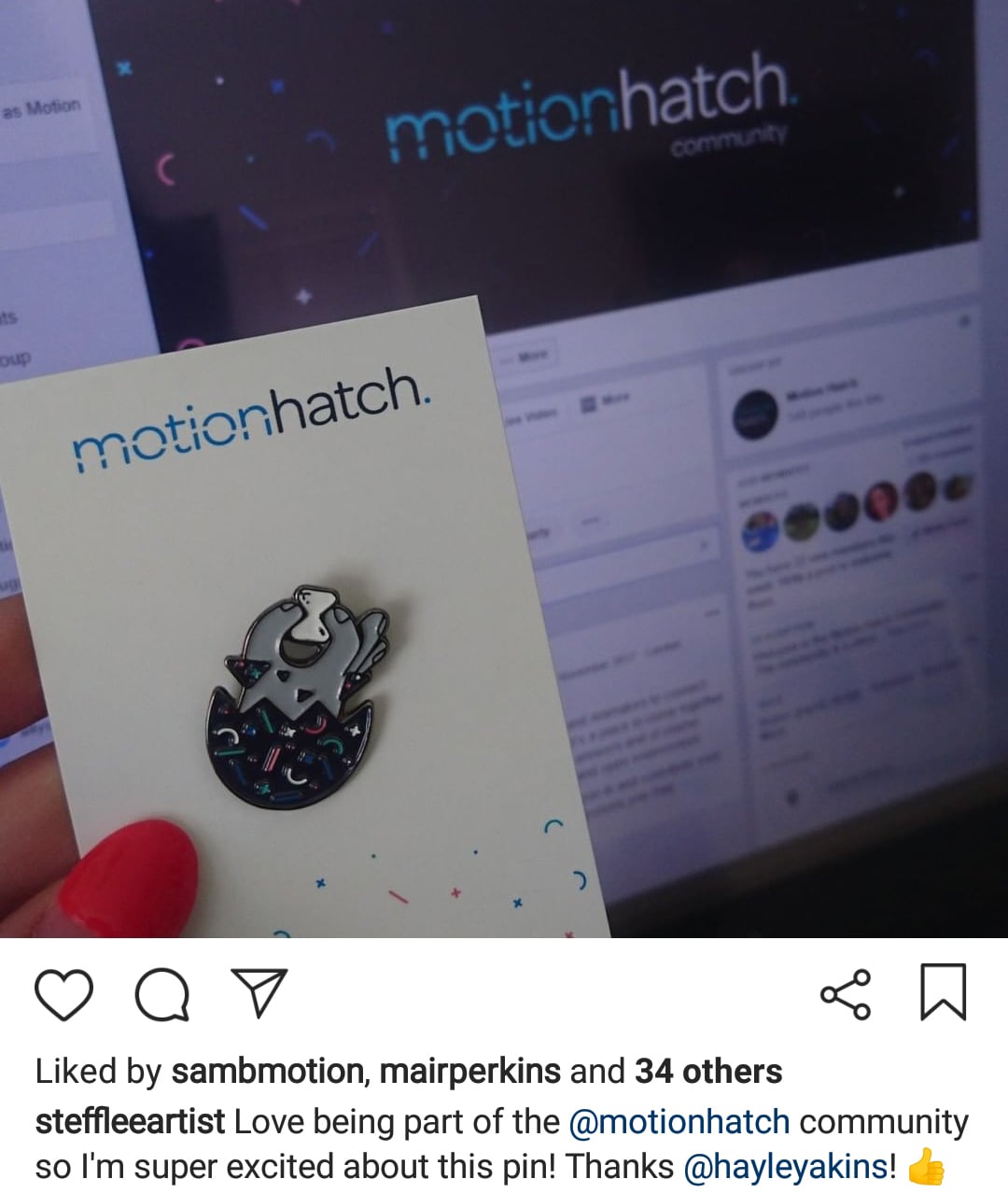 Steff Lee posting about the Motion Hatch Community on Instagram

Reaching out to others in the industry can make us feel more connected and grow our network. It’s especially helpful to have a conversation face to face whether that’s in a video call or in the same room.

The most important thing I’ve done for my career in the last five years hasn’t been learning Houdini or Octane – it’s been talking to 2 or 3 different artists a day over lunch, a sort of Open Office Hours. Talking about going freelance, looking over demo reels, figuring out the next business move for their studio? Creating a daily ritual of reaching past your screen and into someone else’s office or studio anywhere around the world and just saying hello has completely changed my day-to-day life as an artist. –

It’s important to support each other and give back to the community. Sharing knowledge and advice with others can be a great way to overcome imposter syndrome. You may not realise what you have to contribute until you try to help someone else.

There are so many ways to learn but the best way to master something is to teach it to someone else. Even if you’re new to the industry, or you feel like you don’t know anything, you will always be a couple of steps ahead of someone else. You can turn around and give them a hand.

“There’s a special kind of magic that happens when you help someone. It adds helium to your balloon. You rise and bring others up with you. No matter where you’re at or how far you feel you have to go, there is always someone who wants to know how to get where you are. There’s also a strange benefit I never expected… when I make a tutorial or post a quick tip on Twitter, people give me advice and point out different and often times better ways of achieving that result. Teaching, mentoring, or just generally being helpful is so incredibly rewarding.”

Animation by Austin Saylor for The Lettering Animation Course.

Over the past 3 years I have encountered a lot of obstacles, but have also seen the most growth in myself and my career. Building a community and a podcast to help people in the industry has given me a new direction that I plan to continue in. Most recently I released The Freelance Contract Bundle – a set of contract templates made specifically for freelance motion designers.

Through talking to members of the Motion Hatch community, I realised how many problems arise when freelancers dive into a project without a contract in place. This inspired me to bring Solicitor Silvia Baumgart onto the podcast. Chatting with Silvia gave me the idea to make the contract bundle.

Silvia and I worked together to make the contract templates for the UK. I did a pre-launch in July, and following this, worked with lawyer Jamie Lieberman to make a version for the US. I hope the contracts will help set new standards in the industry and give motion designers peace of mind when running their freelance businesses.

Starting Motion Hatch has been the most rewarding thing I have done in my career. It’s definitely not what I expected to be doing when I first started out. Looking back I’m really grateful that I didn’t let imposter syndrome stop me from making the jump to freelance and then starting Motion Hatch. Having support from friends, online communities and others in the industry has allowed me to create something that I hope helps many other motion designers.

If you’re interested, come and join Motion Hatch, we have a community of 3,000+ motion designers, helping each other out and discussing the business side of motion design.