Editor’s note: In this Motionographer Guest Post, we’re happy to bring you the thoughts of Matt Smithson and David Stanfield, otherwise known as Igor and Valentine. For years, both Matt and David have been pioneers of working remotely and have become proof that you don’t need to be in NYC, LA or London to create great work. In this article, we hear a bit about how they came to work together as well as gain some insight into their new film. Enjoy!

David: Thinking back, nothing about this project was conventional, and the route from start to finish was anything but direct. The project that was, and wasn’t, and then was again — sort of.

At the end of last summer, 2017, a NYT best-selling author and all-around-thinker-science-smart person found me on Twitter, and a couple weeks later, hired me to make a video for a product he was planning to launch.

Around the same time, I began talking more with Matt Smithson. I had been a fan of Matt’s work since 2009 or so when I first really started taking notice of motion design. My wife and I had met Matt and his wife in Vancouver at the first Blend conference. I was increasingly tired of going it alone with my work so one evening after a particularly long day at my office, I texted Matt and said, “Hey man. We should make something together and just see what it’s like.” He responded in agreement — he was in the same boat with feeling some burn out from being a lone wolf for several years too.

I told Matt about this new project that was about to start. We decided it would be a great opportunity to try collaborating. And we just kind of started from there.

With Matt being in Charlottesville and me in Charleston, we needed to brainstorm and throw out ideas, but in a way in which we also had some time to think and give input at our own pace (not forcing ideas before we’re ready over the phone or a video call). We started a Dropbox Paper with the script and starting putting ideas down. Several comments, questions, phone conversations, and drafts later, we felt like we had a solid lineup of visual concepts for the script. We storyboarded the thing together, designed the shots together, and split up duties on animation. Since the project had originally come to me, I handled all client interaction. Everything was going just swell. Swell, I tell you!

To make a long story short, after multiple passes at the music, the client decided his preference was to handle music himself, and we delivered final picture, sans audio. Fast forward about 9 months: The video had still not been finished or used by the client. The product the video was to promote was still unfinished. Matt and I were bummed but thankfully, we didn’t have much time to worry about it because we were very busy. Over the course of working on that first project together, several other things had come in, and we decided to try sharing those too. By this point, we were collaborating on pretty much everything that came our way.

Eventually, I was told we could use the video for our own purposes, as long as we removed the VO and all references to the product. We knew we wanted to make something of it, but there was no breathing room in our schedules to give it much thought.

Finally a couple of months after that, we had a bit of a lull. I wrote a new story for the visuals we had created nearly one year earlier. We brought London-based Josef-Israel in to do the new narration (He’s a super nice guy with an incredible voice. His voice gave me chills even over the phone).

We had given ourselves a deadline to finish. After about 4 rounds of Frame.io comments between us, we called the animation “done.” Matt Stanfield stepped in and redid the sound design, added to the music, and re-mixed all the new audio to make it sound all pretty and nice.

So almost a year to the day later, after starting on our first collaborative trial run, we now had a new short film we could be stoked about… lemonade made from the lemons of a dead client project…

On a personal note, this project was important to me because it was my first time writing a script from A to Z. It was fun to do something different. Also, it was incredible to hear a talented voice actor reading words I had written. That said, it’s an odd experience to write a new story to visuals that were created for something entirely different, almost a year prior. I look forward to the next one when things can happen in a more natural order…

The story was written in response to the feeling of dread that has probably consumed all of us at times over the past few years, while watching the news, scrolling through Twitter, or hearing about another mass shooting, natural disaster, or disgusting revelation about elected so-called-leaders in our country.

This story hints at an ancient mythology that supersedes the finite time we’re currently living in, and is, in some small way, meant to be an antidote to that feeling of dread. It reads like a letter, written to remind its readers of good things. It stays broad and doesn’t get too specific; while we know it’s just one video in a haystack of videos, our hope is that it offers hope to all different kinds of people. It is meant to offer a brief respite from the noise and violence of our relentless news cycles. But if someone just likes watching it, that’s great too.

Matt: When David approached me with the idea of collaborating on the project, I was already full swing on a rebrand of sorts. I had been directing under the name man vs magnet since 2006 and was looking for a change for multiple reasons. I was a big fan of David’s work and thought: man perfect timing.

I was burned out from directing solo (with help from many friends along the way!!) for over 10 years and was excited to collaborate with David on this one. David and I got to talking, we realized we had a lot in common in work and life stuff: both of us working remotely, the importance of family time, adventuring, surfing, life vs work balance etc.

We worked on the early version of ‘The Depths of the Barely Visible’ as a test run. Our personalities and working methods worked really well together. David and I went right into collaborating on a couple more projects.

It was going well, and David and I talked about collaborating more permanently as a director duo. From there, Igor + Valentine was born.

Igor + Valentine was a brand I was developing because of my past in working on a range of projects for various clientele. It was not uncommon for me to be working on a personal experimental animation while working on a project for a commercial client or non-profit. These projects were very different, and I was looking for a name to cover them all.

It made sense – Igor is the mad scientist and Valentine is the do-gooder.

In collaborating, I found out both David and I were making art based projects as well as commercial work and animations for do-gooders. We decided that this name and notion fit both of us, as we are both a little Igor and both a little Valentine. In this way, we are making stuff that scares our grandmas under Igor and making stuff that makes our grandmas cry under Valentine.

Igor + Valentine will be a year old in December. We already have a few projects under our belts, but as David’s wife reminded us recently, ‘The Depths of the Barely Visible’ was actually our very first collaboration. Onward and upward.

David: I would just add that it wasn’t a decision we rushed into or made lightly. We had about 73 four-hour phone conversations, mostly of me crying and asking Matt how it would really work though… Maybe it was like four phone conversations, but they were long, and there were tears (there weren’t tears). We met up in DC (cheapest tickets) one weekend for a marathon hashing out of all our questions and thoughts and plans and ideas, before deciding when and how to start Igor + Valentine. I think we were both a little nervous to change up how we did things, at first. But now, we finish each other’s… 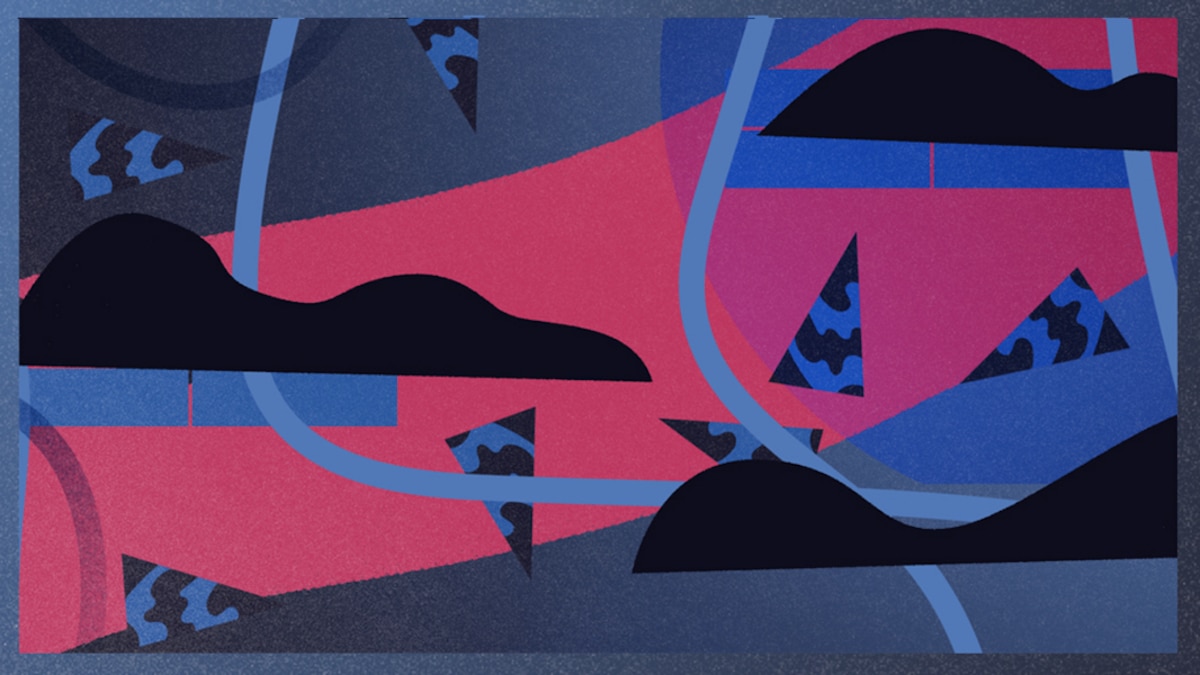 David: Working remotely has been great, and fairly easy to do since we were both already doing it on pretty much all our projects before joining up. Honestly “working remotely” just feels like working to me now, as far as collaborating with clients. Working with Matt, the only thing better than working remotely would be not working remotely. But… I’ve given up on trying to talk Matt into moving back to Charleston. One perk of working remotely is that I no longer own pants, and I’ve become one of those hermit-troll-men you read about in legends and fairy tales. So that transformation has been neat.

Matt: There are some challenges in working remotely in the woods of Virginia such as having a higher risk of being attacked by a bear, but other than wishing we could get some more face to face brainstorm time (us just surfing probably) — working remotely has been great. We have created a working system that is efficient.

Both of us are family dad people guy dudes, and one of the fortunate similarities of our working practices was starting early in the day (8:30 or 9) and ending soon enough to get home for family hangs (5 to 5:30). This helped ease the transition, as we were on the same schedule and had the same respect for each others’ duties to our families. We were able to step up if one of us had a kiddo that decided to paint the walls with poo or got sick with typhoid fever for the fifth time. We are open about our working window to clients and it seems to be working out fine.

David: It also helps a lot that we’re in the same time zone. We’re used to working with people who are in different zones but if we ourselves were, too, it would just be an added layer of scheduling complication. That’s why we both signed in blood promising to never leave the sweet EST. That said, we plan to work from Costa Rica or some other beautiful place with good waves some day. At least for a month or two, as an experiment. And by “work from Costa Rica” I do mostly mean surf and drink out of coconuts with our kids.

Matt: This is the first time I have heard of said ‘blood promises’. I am about to apply to some Motionographer job listings. Bye David.

Essentials that are harder to come by: