I don’t think I’m assuming too much if I say we could all use a little something tranquil, dreamy, and magical right about now.  So tune out and dive into this mesmerizing visual odyssey.   Play it FULL SCREEN and with SOUND UP.

And keep in mind this was shot practically as one single shot filmed on the 8mm2 (0.3 square inch) surface of a chemical reaction – making it a one of kind technical feat!

How long did it take to complete this film?
Shooting the film took me 10min with about 1hr of setting up everything.  However, post-production took about 9 months to complete. Of course, counting periods when I was working on other projects.

What was your inspiration?
I can spend a day going through space telescope Hubble’s pictures. Same with microscopic views of cells. There’s something magnificent in these images. We know these visions are surrounding us yet they are mostly invisible to the human eye.

Of course, I have also been deeply inspired by Douglas Trumbull. He’s the one who supervised the practical effects on Terrence Malick’s Tree Of Life or Kubrick’s 2001 Space Odyssey. I love the idea of representing something with something completely different. Like representing the immensity of the universe with microscopic imagery…

Can you describe the process in a bit more detail?
My work is mostly based on trial and error. I go through the internet, books or friends to look for new recipes, ideas or inspiration. I then experiment in my studio for new techniques and textures. The experimentation step is very important as surprises and deceptions happen at that moment. From that moment I follow what I envisioned in it until I reach something I’m satisfied with.

Afterwards color-grading is essential in my work. A lot of times I will completely change colors to illustrate something precise, such as fire, gold or water.

What chemicals are used?
I like to keep the details of my recipes secret. I see it as a way of protecting the magic surrounding the images. I love seeing adults be kids again by trying to understand what they are seeing. I feel like revealing the trick would take part of the magic away. 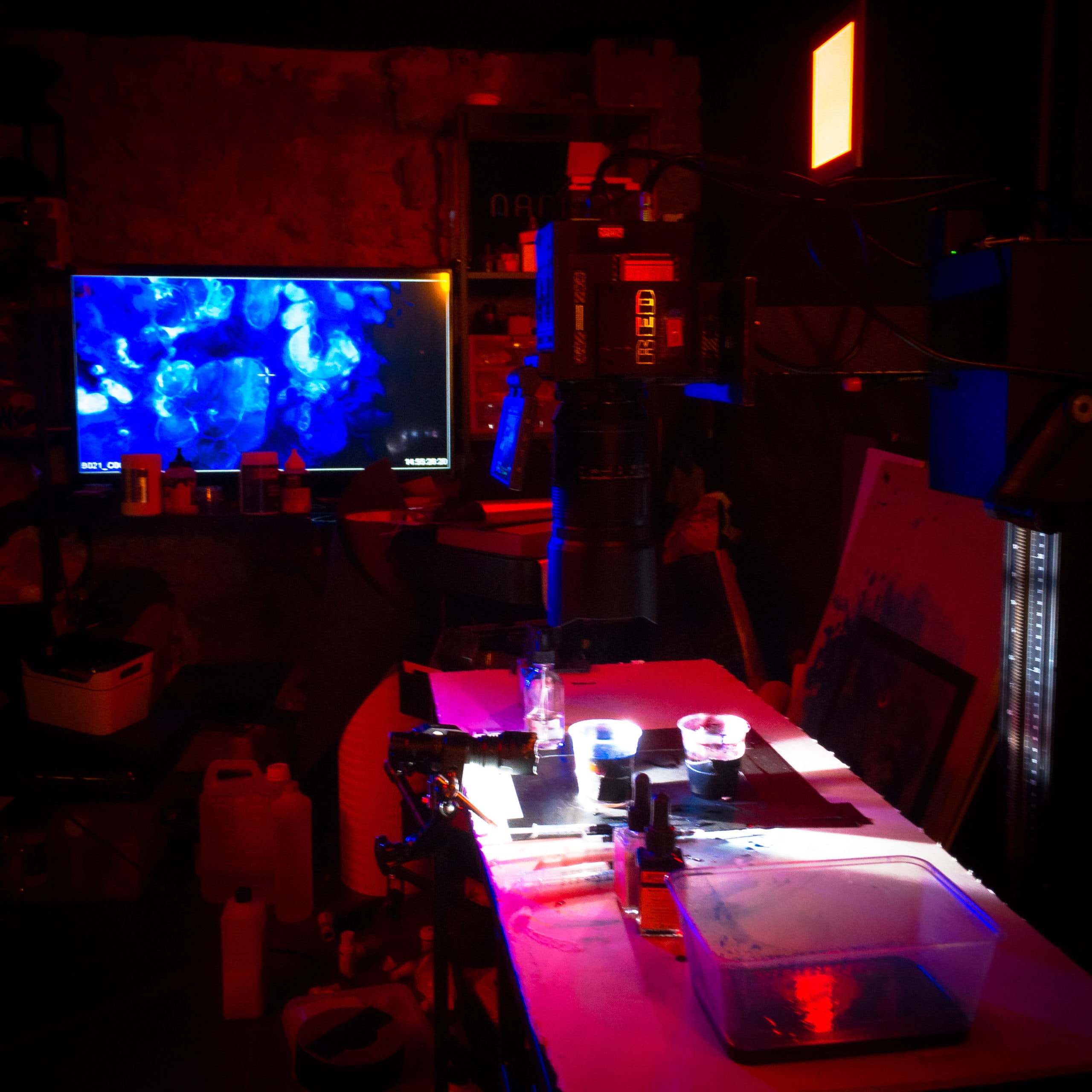 What programs do you use?
The film was shot with a Red Helium 8K camera.

I mostly work on Davinci Resolve for editing and color-grading. Because the film is made of one single sequence color grading was quite a hassle. For those familiar with the software the color grading was composed of about 60 nodes and hundreds of keyframes on one single shot. Making it a real technical challenge.

Motion design and finishing was done in After Effects.

There’s something very introspective in color-grading. In my process, I try to understand what the image makes me think of (fire, water, leaves…). I then work the colors to materialize that vision. Sometimes it can feel very much ungratifying, as you will spend days looking for something until you realize there’s nothing to be found… But I guess it’s part of the game!

Do you have a favorite moment?
When shooting, I get extremely concentrated over this very small, luminous and colorful surface. There’s something deeply meditative and contemplative that happens in that instant.

How did the music collaboration unfold?
Thomas and I currently share a studio in Paris. Although Thomas Vanz is mostly known for his brilliant work as a director he is also a piano virtuoso.

Thomas used the piano as much as possible to create a rich, hypnotic yet natural soundscape. This also allowed the composition to be as spontaneous as possible. With his piano and two microphones in his bedroom we could record everything live during multiple sessions.