Give us a brief introduction to yourself

I am a motion designer, director, and VFX artist in Lyon, France. My passion is to tell stories through animation and dramatic theatre. 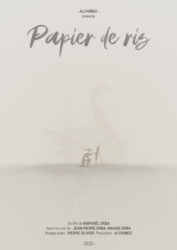 When I was a child, my father regularly gave me comic books, paper, and pencils. I quickly found out that I could scan my drawings to color them on the computer. I then discovered 3D and Flash (now known as Animate), where I began to create my first animations. After many, many tutorials I started a business with two friends, and we have been able to work together on our passion.

I made “Papier de Riz” mostly alone. It was created for a short film contest, Kino Lyon. The topic was “Unique.” At that time, I didn’t know if they were accepting animated films. But I remembered a Chinese fable about a painter who had to make his masterpiece, and I decided I had to make this film, even if I couldn’t compete.

“Rice Paper” is an animated short inspired by an old Chinese tale.

We tell the story of the Emperor of China, who seeks out a renowned artist and asks him to paint “the most beautiful swan ever seen.” The artist agrees but tells the Emperor it will take him ten years. Like all children’s stories, there is a plot, a challenge to overcome, and a moral; you come out of it wiser at the end.

The animation was heavily influenced by origami with the characters and settings made from paper and the shapes and visuals focusing on the light and the white of the paper.

For the contest, I had to create the film in a month. Around that time, I saw a new offer for Maxon One, bundled with Red Giant and the Redshift license for C4D. I already use Red Giant with After Effect, and I’ve learned the basics of C4D during the lockdown.

After I wrote the text, I recorded the voice, then I modeled and animated the film. I did scene after scene with almost no idea of what would happen next. I usually make a storyboard, but for this project, I wanted it to be more spontaneous.

Making the film alone was intimidating, but I was surrounded by friends and colleagues who could give me feedback on the writing and the graphics. Some of them are professionals; others, like my partner and daughter, are not in the business; they have no idea what the work involves, yet their comments are the most valuable to me.

Recording my daughter’s voice, she’s only four years old. All she had to say was, “father, father, come and see.” But when she realized the mic was recording her, she would say “father” and just scream and laugh. It took about ten attempts to get her to focus. But when she finally did, something very interesting happened.

She was playing the Emperor’s son, and I wanted him to be in a hurry, as he was calling his father to prevent the painter’s execution. After many attempts at delivering the line how I wanted it, she said very calmly and with a little smile, “father, father, come and see…”.

When I heard her delivery, I thought to myself, she’s right. The young boy could not be in a hurry talking to the Emperor; he would be standing in awe in front of ten years worth of sketches.

To best optimize my time, I modeled and animated the scenes during the day and let the computer work all night. In the morning, I would analyze the final render.

As I was late to get home on some evenings, I often had to finalize a scene quickly in order to start rendering. But in a rush, I would forget to check a box or adjust a parameter. I’d wake up, and a keyframe would be misplaced, or only two images will have rendered; I even discovered one scene with a grey cube in the middle of it. I’d then have to patiently wait until the evening to restart the process and get the final result.

When you feel stuck or need inspiration, where do you find it?

Motionographer, of course! And social networks, where I follow many talented artists and their work. I love to listen to music and imagine what pictures can accompany it.

For this project, I was inspired by a novel called Neige by Maxence Fermine. It’s a story about a young boy who writes haikus (short form poetry), all celebrating the beauty of snow; his one great subject.

What are some ground-breaking moments in motion design that have shaped the way you think?

When I saw the firsts toon shading renders a long time ago.

Paperman from Disney, and recently Klauss.

I love to see how the world of traditional animation techniques and CGI can work together.

I would like to see those with specific technical skills highlighted, rig, backgrounds, compositing, physics simulations, etc. I would also like to chat with and meet people to collaborate on creative and fictional films. 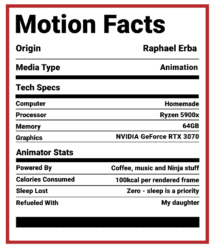