How have game trailers become almost as hotly anticipated as the games they’re promoting? Across online fan spaces and during industry events, game cinematics spark heated discussions and are works of art in and of themselves, with their own narratives and directorial styles. In the span of a few minutes, the cinematic game trailer needs to introduce and absorb the viewer into the game’s world, visually and audibly.

Over the past decade, video game studios and publishers have moved away from using their own gameplay assets for trailers and are instead hiring dedicated production companies to produce CG cinematic trailers to convey a game’s tone, themes and story.

We sat down with Jörgen Lilja (Executive Producer) and Emnet Mulugeta (Director) from Goodbye Kansas Studios, the creators of cinematic game trailers for titles such as Cyberpunk 2077, Assassin’s Creed: Vahalla, and Suicide Squad: Kill the Justice League, to gain insight on their secrets to creating a successful cinematic game trailer.

Although developing a trailer that may end up having very little to do with the final look or functionality of the game itself, Jörgen and Emnet agree that the key is creating a full story around it.

“For me, it always starts with the script,” says Emnet, “which doesn’t exist in a vacuum. We take the game’s world, and we live in it, adding compelling characters and engaging backstories.”

In Goodbye Kansas’ 2020 trailer for Assassin’s Creed: Valhalla, the violent and grisly life of a Viking had to be shown visually in under two minutes. Through the use of film production techniques, such as fourth wall breaks, the one long continuous shot, and character camera tracking, Goodbye Kansas put viewers right alongside Eivor the Viking during a barbaric raid.

“At the end of the day, what we do should serve the game, the world, and the fans,” says Emnet. “I’d never really seen a game cinematic break the fourth wall before. I try to think how we can do things differently, but you should always keep in mind how it serves the game.” To avoid an ‘echo chamber’ of repeating previous trailer formats, Emnet draws from his experience as a director. “I tend to look at these trailers from a perspective of storytelling instead of as a product of the gaming world; I think it’s often healthy to have these different perspectives and take inspiration from outside sources.”

The duo’s key element when creating a game trailer? Pre-production.

“The more you can plan, the better,” states Jörgen. “Whatever you need to create to make sure you get the correct scope of the project and that it’s manageable in time because I think that’s often the biggest issue from our side – a compressed timeline.”

To keep things manageable, Emnet advises avoiding biting off more than you can chew.

“We often see longer cinematics that suffer from their length rather than having a tighter script. The script is everything. Have a good script because it’s hard to save a bad script with beautiful images.”

Use memorable characters and humor to convey tone

How exactly have game trailers, as a marketing tool, creatively evolved to the movie-like cinematics we see today? According to Jörgen, it’s thanks to fan engagement and their ability to build hype around a game “that won’t be released for another three, four, or even five years.”

For their recent Suicide Squad: Kill the Justice League trailer, Goodbye Kansas had the creative power over some of DC’s most beloved comic-book villains. Without excluding new audiences or offending the existing fanbase, Goodbye Kansas had to quickly introduce four main characters and the history between each character with a humoristic tone, all while moving the narrative forward in a war-torn Metropolis.

“With the accessibility of watching videos online, game cinematics just exploded. A lot of the buzz is gaming fans who watch and dissect the trailer – looking at every frame, every pixel, just to find clues on what might come up in the game. So it’s enabled developers and publishers to communicate with fans in a totally different way.”

Jörgen highlights a recent piece of work, Goodbye Kansas’ The Outer Worlds 2 trailer, as an example. With a tongue-in-cheek mockery of the traditional game trailer format, the “whole narrative was based on the fact that we’re showing things that weren’t yet defined or in the game,” giving them a unique amount of creative freedom on the project.

As for Jörgen’s favourite trailer, Goodbye Kansas’ work on Grant’s character trailer for Overkill’s The Walking Dead game is a highlight.

“It’s just an old man in a car having a monologue with a zombie. It wasn’t something we’d seen in cinematics before; no cool shots, no shiny armour, less action-packed. It’s this short film approach where we can tell a compressed, but still full, story.”

Create a sense of the game’s scale and narratives

For Cyberpunk 2077, Goodbye Kansas starts their trailer with a character asking the protagonist: “So, what do you want?”. This sense of freedom of choice is sown throughout the trailer as Goodbye Kansas shows specific aspects of the larger game world, some of the core gameplay themes – such as body modifications, player dialogue interactions, and vehicle chase segments – and how these brief glimpses of narratives culminate in an action-packed fight scene.

These snippets, while not facsimiles of how the gameplay will look in the final product, allow audiences an insight into the feel of the game. As a director, Emnet tries to look past the push for hyperrealism and focus on tailoring the visual look to fit the game.

“There’s an unspoken truth, a general knowledge that gameplay and cinematics are different. We can get the visual quality level up to hyperrealism and almost realism – but is that helping or hurting the game process? Because obviously, it’s not gameplay. Gameplay is something else completely, and it’s something we have to balance.”

Jörgen harks back to the use of the trailers as a marketing tool when visualising the game’s world.

“There would be different styles of cinematics involved in a realistic first-person shooter versus a strategy game looking down at a map to direct troops. It’s almost an image or branding focus – for example, in a car commercial, it’s not about the actual car, but about how you feel when you drive the car or who you become when you buy it. In the same way, we’re not going to share all the technical specs or details about the gameplay because players will find that out when they play it.”

As an executive producer, he claims the most important step in his process is “all about establishing a relationship with the client.” Balancing expectations both externally and internally is a constantly exploratory process. A game’s tone, he emphasises, comes from “not losing the motivation”.

“So we’re creating a character: what’s the motivation behind it, and what do you want to portray with this specific effect or this specific environment? Do we want it to feel scary, hostile, or friendly? We have to make sure everyone’s aligned with what we want to accomplish, but also that everyone can maintain their own creative freedom.”

While there are many different elements that go into creating the most successful game trailers – dynamic and engaging formats, humour and tone, world-building – the core principle is simple. Have a good story, says Emnet: “Good dialogue, good writing, and then do your best to execute that.” Building a story around a game that hasn’t yet been released can be tricky, but the most rewarding trailers will create an emotional bond with audiences and allow them a glimpse into the world they could soon be a part of.

Jörgen started out in the entertainment business over 15 years ago, working with live shoots, commercials, and music videos. As Producer at Visual Art, he supervised numerous projects of all sizes, constantly building his network of creatives and agencies, getting more and more hooked by the wonders of the digital world. In 2014 he and his team formed Bläck Studios – today a vital part of the Goodbye Kansas operations. Over the years, Jörgen has helmed plenty of large projects, including commercial projects like the multi-awarded web campaign “Nike – Your Year. Directed by Nike+” – in close collaboration with AKQA – and many AAA game trailers and cinematics, including all of the multi-awarded character trailers for “Overkill’s The Walking Dead” and the hugely successful “Cyberpunk 2077” trailers. 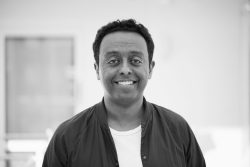 Eritrean-born Emnet has been a part of the design and VFX community in Sweden since the early 2000s. After a short stint in Australia, he returned to Stockholm to focus on animation, compositing and on-air design. He quickly rose to the role of Creative Director leading design work on TV rebrands and promos across Europe, gaining numerous Swedish and international awards. This success led to recognition and work in the US, where he wrote and directed live-action commercials and promos for FX, Showtime, HBO, TNT to name a few. As a jack of all trades he writes, directs, designs, animates and edits on most of his projects. Having returned to Stockholm after living in LA for the past seven years, Emnet joined the team at Goodbye Kansas as a Director.