I am a director and designer born in Japan, raised in Los Angeles, and based in New York. My producer Anna Kim and I lead a creative agency, ARISU. Guided by the principle that good stories deserve good design, we thrive on multi-faceted projects that extend across various platforms, including television, film, social + digital experiences. 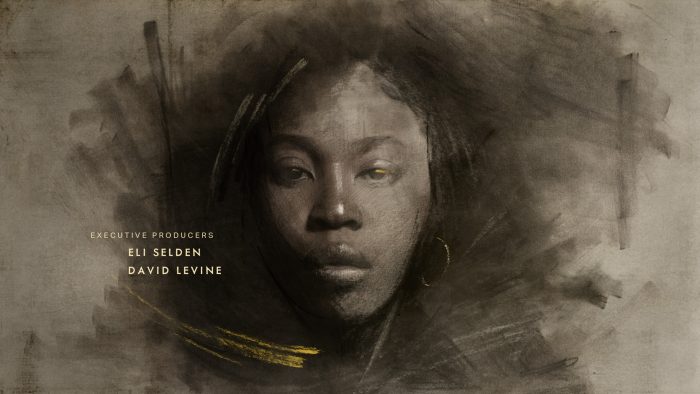 Illustration of Robyn by Riad and Arisu Kashiwagi

Fill us in on your Motion Design background and what led you into the industry?

Growing up, I took my art classes very seriously and graduated high school, intending to pursue painting in college and eventually turn it into a professional career. During my undergraduate years at Yale University, the medium of painting became too limiting for me, so I decided to explore graphic design instead. Within the program, one particular class called Multimedia design inspired me to shift my focus from fine art to Motion Design. After graduating in 2005, I spent a few years as staff designer at Imaginary Forces and then joined the freelance community to explore different studios. I have transitioned into an independent director since then. 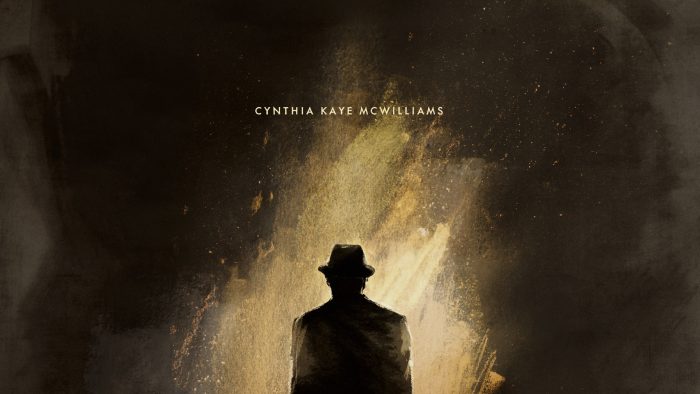 How would you introduce your piece to someone watching for the first time?

This title sequence is an illustrated journey inside the mind of Ptolemy, the protagonist of The Last Days of Ptolemy Grey, a limited series on Apple TV+. Based on the acclaimed novel by best-selling author Walter Mosley, the series stars Samuel L. Jackson as a 91-year-old man with dementia who elects to temporarily regain his memories through an experimental drug to avenge the murder of his great-grandnephew. The core of the concept comes from the question:  What does the world look like in the mind of someone experiencing dementia and generational trauma, living a brief moment with clarity and purpose? Inspired by Mosley’s idea of memories as noisy secrets locked behind a door, we wanted to represent fragments of Ptolemy’s memories as unfinished sketches. Using the medium of charcoal illustration, characters and scenes from his past draw onto the frame, whether it is something based in reality or one of his dreamy visions. These sketches oscillate between lucidity and ambiguity as if drawn by a delirious hand that is desperate to grasp onto reality.

Hand illustration by Thomas Cian and animated by R79 Digital

Once Apple TV+ and the showrunners approved our direction, my producer Anna Kim and I reached out to artists Riad and Thomas Cian to draw charcoal illustrations by hand that were later digitally comped into the shots. We were so excited for their collaboration as their illustration styles aligned perfectly with our concept of missing and found memories.

For the animation phase, we partnered with R79 Digital in Los Angeles, led by animation director Eric Demeusy and producer Dmitry Fitisov. Eric and I had collaborated on several projects in the past, including the main titles for Stranger Things and Marvel’s Jessica Jones, so he was the first person I thought of for this project. We had an array of amazing artists who joined the team: animators Bhakti Patel and Cody Courmier, cel animators Mikhail Pakhomov and Stephanie Simpson, and editor Rachel Ambelang. In close partnership with the team at R79 Digital, we brought our storyboard frames and illustrations to life through a mixed media combination of cel animation and 2D/3D digital animation.

Cel animation of the robin by Mikhail Pakhomov

Why were you excited about making it?

Our client and showrunners, Diane Houslin and David Levine, gave us complete artistic freedom to come up with our own concept. After reading Walter Mosley’s novel and script, I was so moved by his incredible story and was inspired to bring his striking visual metaphors into our sequence. We spent hours studying the reading material, treating it as our bible. It was during this process that we picked up on details like how Ptolemy’s favorite color is yellow, which became the accent color in our sequence. We found many recurring visual motifs, for example, the door in Ptolemy’s apartment that locks his “noisy secrets” away inside his mind. I then integrated these metaphors into the styleframes and edited them together into a storyboard. When we received the episodes, we were blown away by the show, particularly the stellar performances by the one and only Samuel L. Jackson and Dominique Fishback. That, of course, fueled the excitement that was already there for taking on the project.

Ptolemy’s eyes broken down into layers in Photoshop

Can you walk us through the sequence?

We structured the storyboard in a symmetrical arc, opening with Young Ptolemy’s eyes and ending with Old Ptolemy’s eyes. The sequence is bookended by a flying robin, a symbol of the character Robyn who helps retrieve his memories. As the door to his memories opens, the robin guides us into various visions from childhood into adulthood: fishing with his uncle Coydog, the fire, his wife Sensia, and watching the sun at Lake Altoona. Portraits sketch on the three critical people who shape his destiny: Coydog, who gifts him his life’s mission, Sensia, who deters him from his mission; and Robyn, who helps him remember and fulfill the mission. Key visual metaphors – truth and justice (lantern), violence (gun), regeneration (syringe + droplet), legacy (treasure box + coins), and love (hands) – are woven in as essential themes from the story. The sequence ends on Old Ptolemy with the robin reappearing from the intro, flying into a future full of freedom and hope. 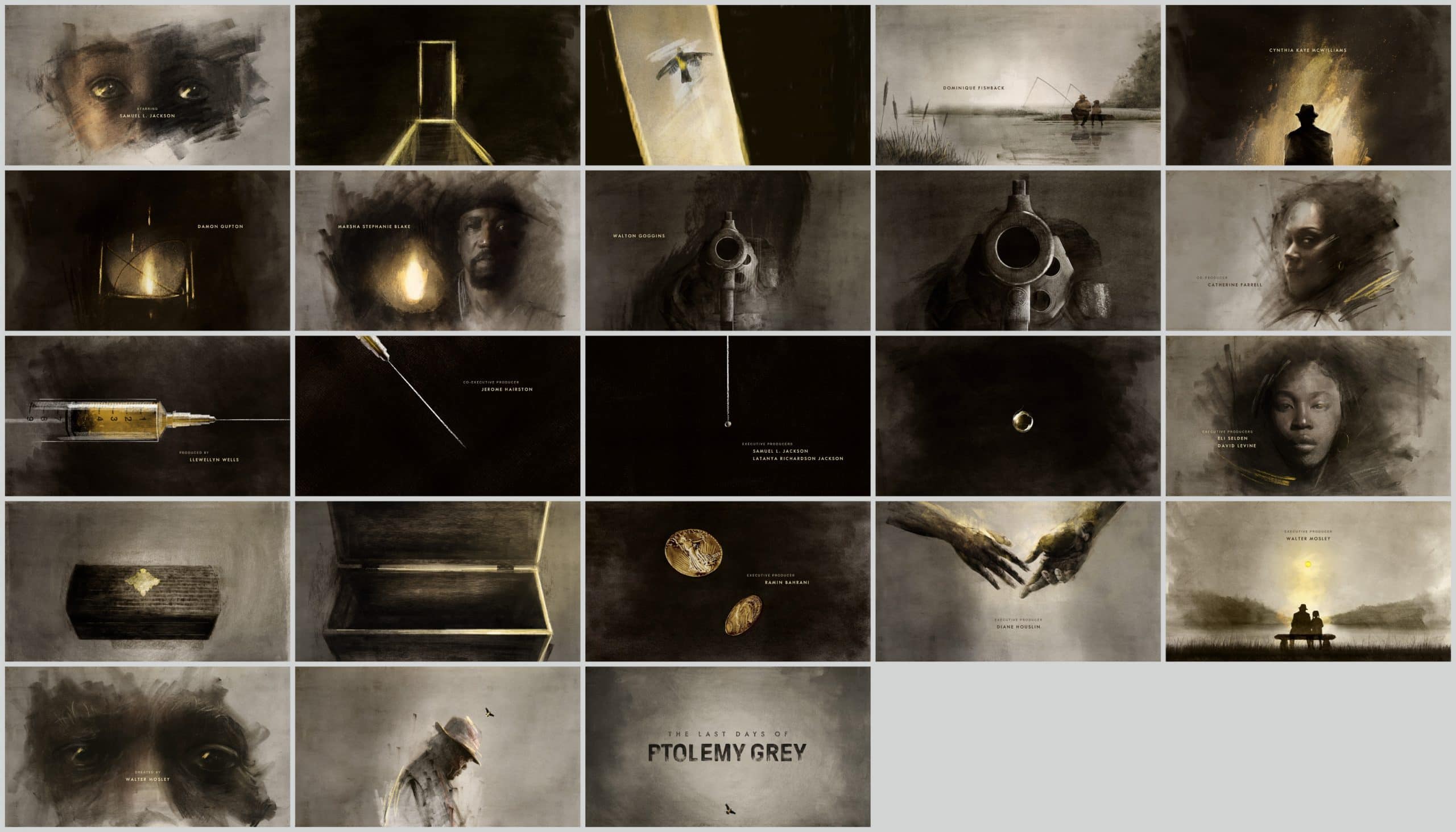 During the production process, we spent roughly five weeks in design and four weeks in animation. I wanted to create a piece that was a hybrid of traditional and digital techniques. The design team worked closely with R79 Digital providing them with elements during the animation process where the shots were animated in After Effects, Cinema 4D, and traditional cel animation. We scanned all the hand-drawn elements and digitally comped them into Photoshop layers, ensuring there was enough separation between the strokes for the animation team. This process allowed the animators to map the textures onto 3D geometry to add depth to an otherwise flat illustration.

We wanted to make sure not to rely on effects, filters, or textured photography. It was important that each frame felt like a physical drawing that was breathing in digital space. For example, Eric and I discussed not using CG blurs to show something that is blurred (i.e. the candlelight in a lantern or the shadowy figure behind the gun), but rather, the blur would be illustrated within the design frame as abstract strokes. 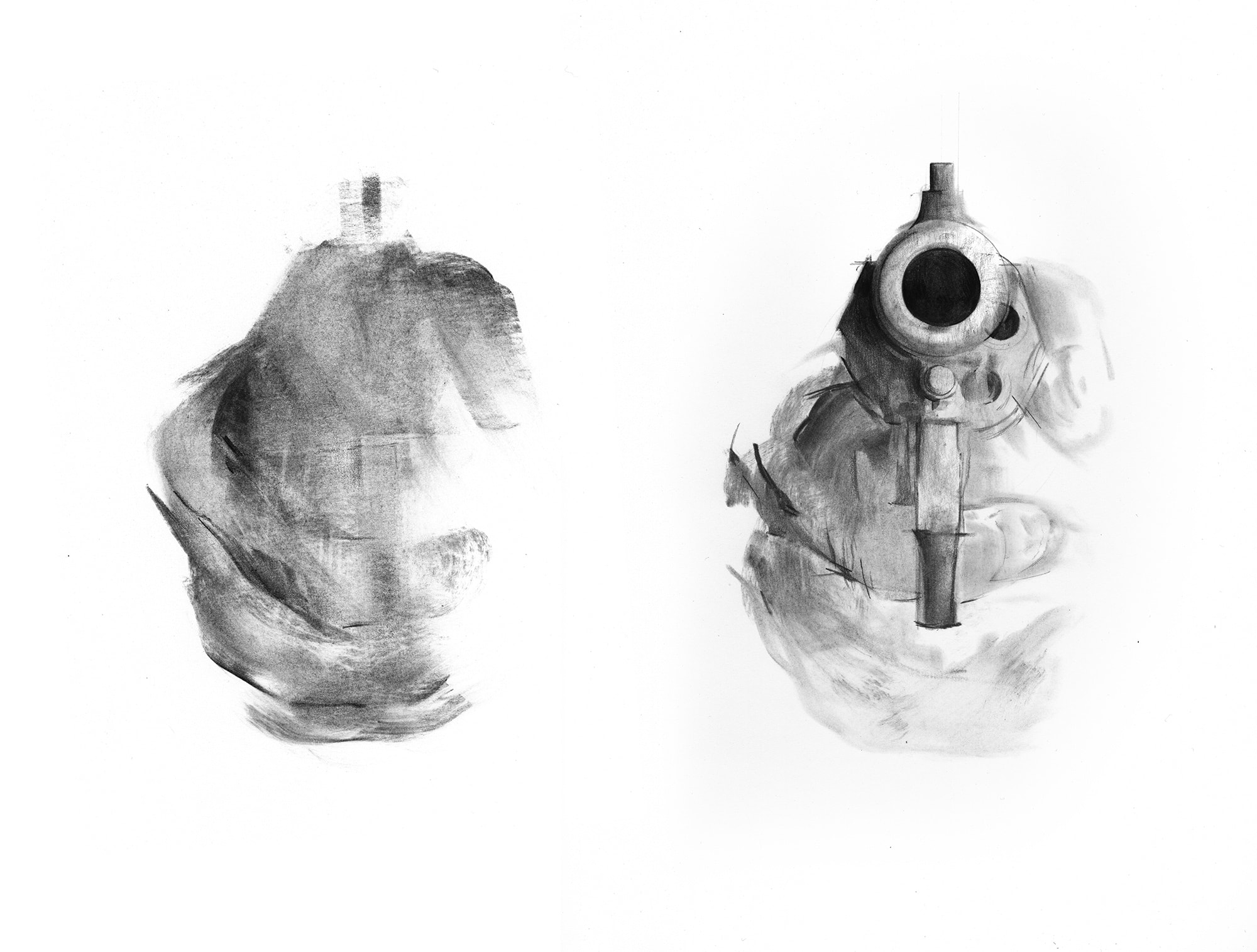 Breakdown of the gun illustration and animation by R79 Digital

One of my favorite moments during the project was when we saw our earliest passes in animation and our styleframes coming to life. The first shot we worked on was the opening shot, where the camera flies through young Ptolemy’s eyes into a silhouette of the door. Seeing that transition from the boardomatic stage to a fully animated shot was definitely an exciting moment for everyone.

Given the time constraint, we had to be selective about which sections should be done by cel versus digital animation. To achieve a cel-animated feel without doing every shot in cel, we played with slower frame rates and looped textures that changed in the background. This created the illusion that the scenes were being animated frame-by-frame, much like how I imagined memories as shots playing imperfectly in the mind.

We also experimented with various versions of the cel-animated fire. Since the fire in the original styleframe had a very graphic quality using masked textures and broken strokes, it was difficult to translate this style into cel animation while simulating the motion of a real fire. In the end, we decided to prioritize the movement and re-designed the look.

Variations of the cel-animated fire by Stephanie Simpson

How did you cope with the subject matter? Did you feel under pressure to do it justice?

We wanted the titles to live up to the beauty of Walter Mosley’s prose, so we made sure to give ample time to crafting the styleframes. Since we only had a minute to work with, I wanted every shot to have a purpose within the sequential structure and that none of them were chosen just to set the mood for pure atmosphere. Creating each talent portrait was also a daunting task, as we wanted to make sure we captured the likeness of the stars and the soul of the characters while keeping the strokes loose and abstract. 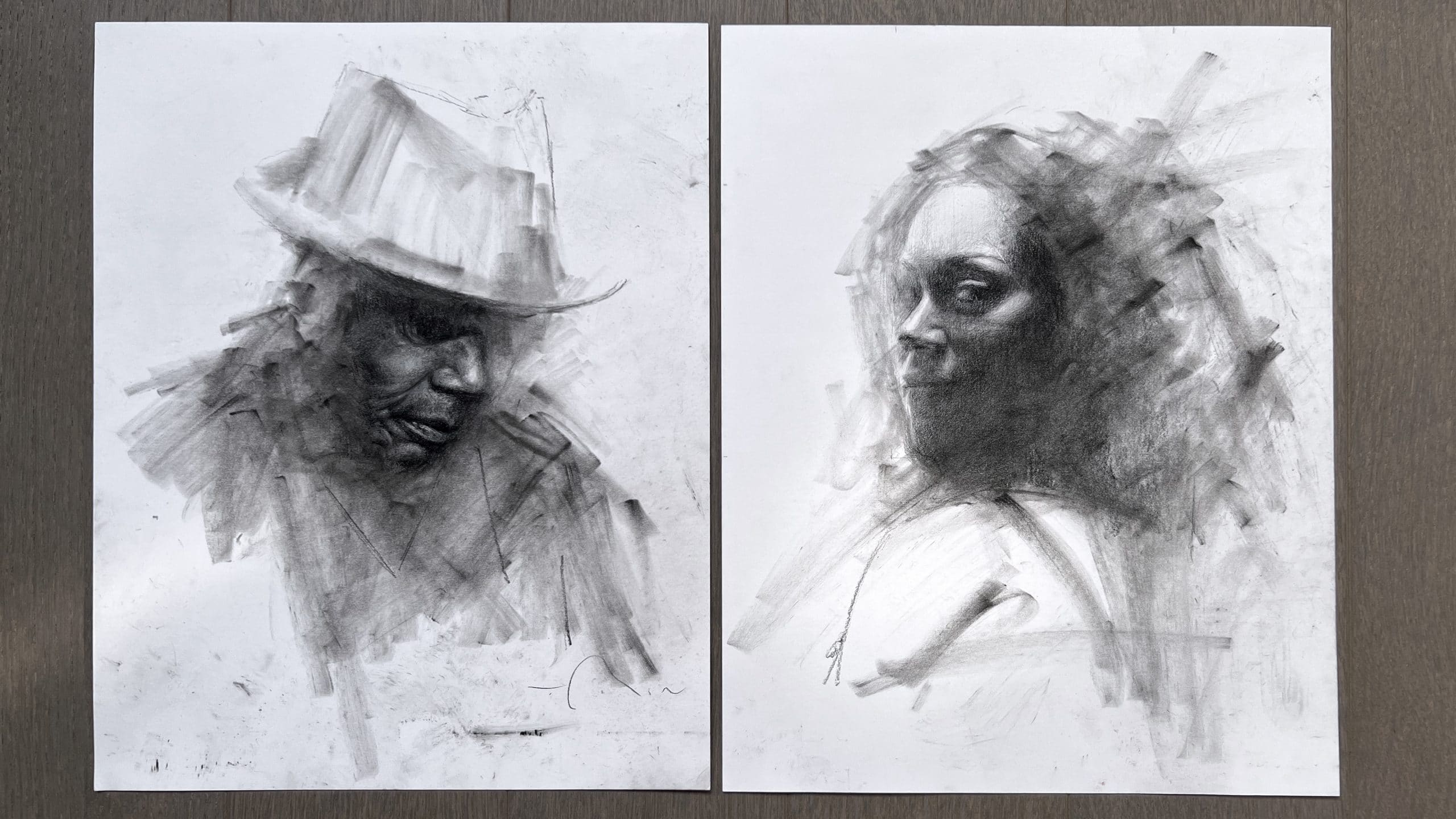 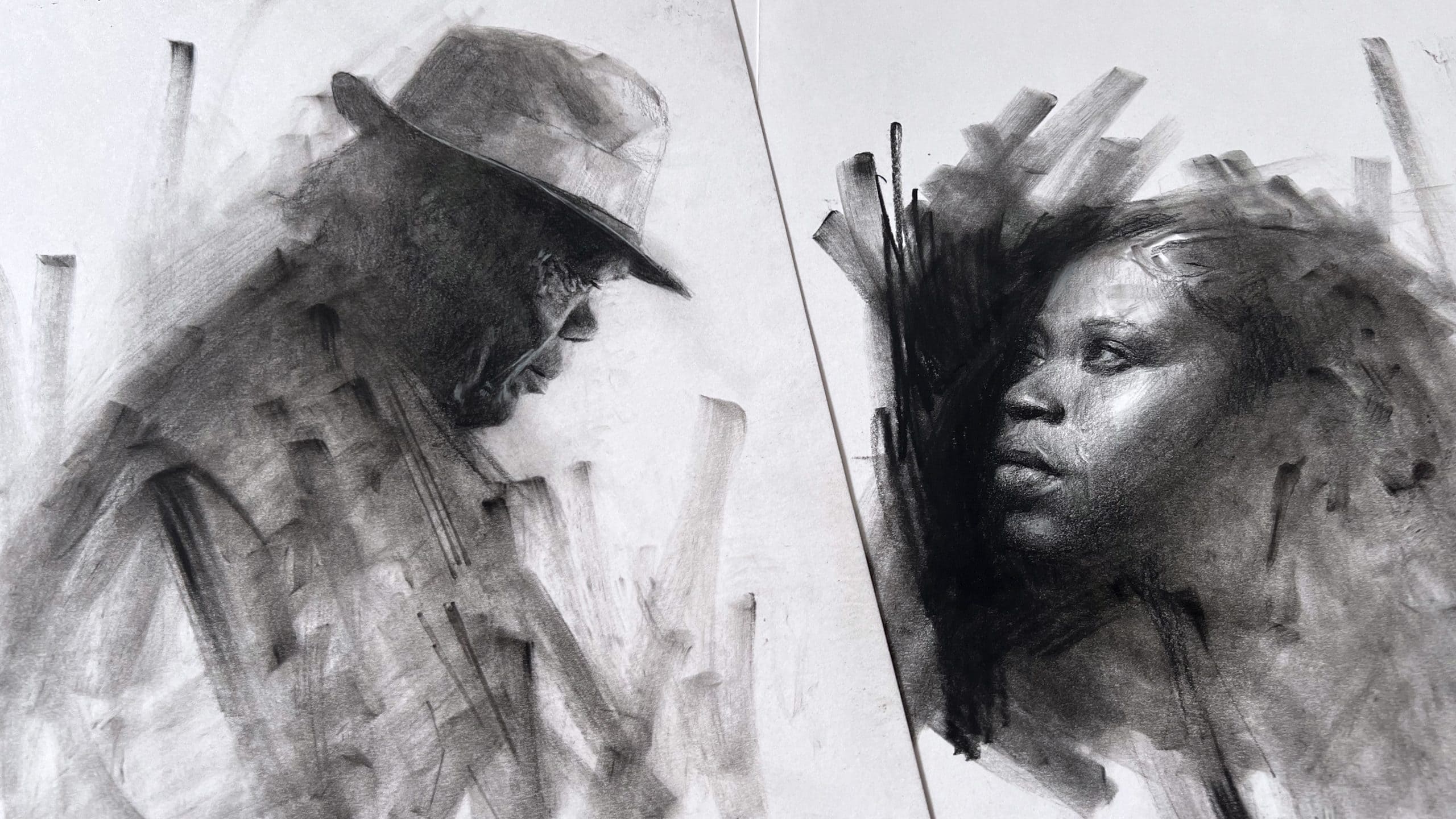 When something doesn’t feel right, I will typically step away from it. I’ve found that a fresh set of eyes helps solve the block. Another way I’ve learned to deal with creative doubt is to invite other team members into the discussion. I trust their opinions the most, and having that support and open line of communication is vital to the project.

Cel animation of the droplet by Stephanie Simpson

In the year 2022, technology has greatly evolved, but how much have we progressed since a century ago when Ptolemy, as a young slave boy, witnessed his uncle get lynched? We still live in a society of generational trauma that continues to pile on one violent memory after another. I believe it is our duty to keep expanding our creative library to invite, share, and inspire stories and works by artists from different cultures and unique perspectives to mitigate the painful polarization that is so prevalent in our current social climate. 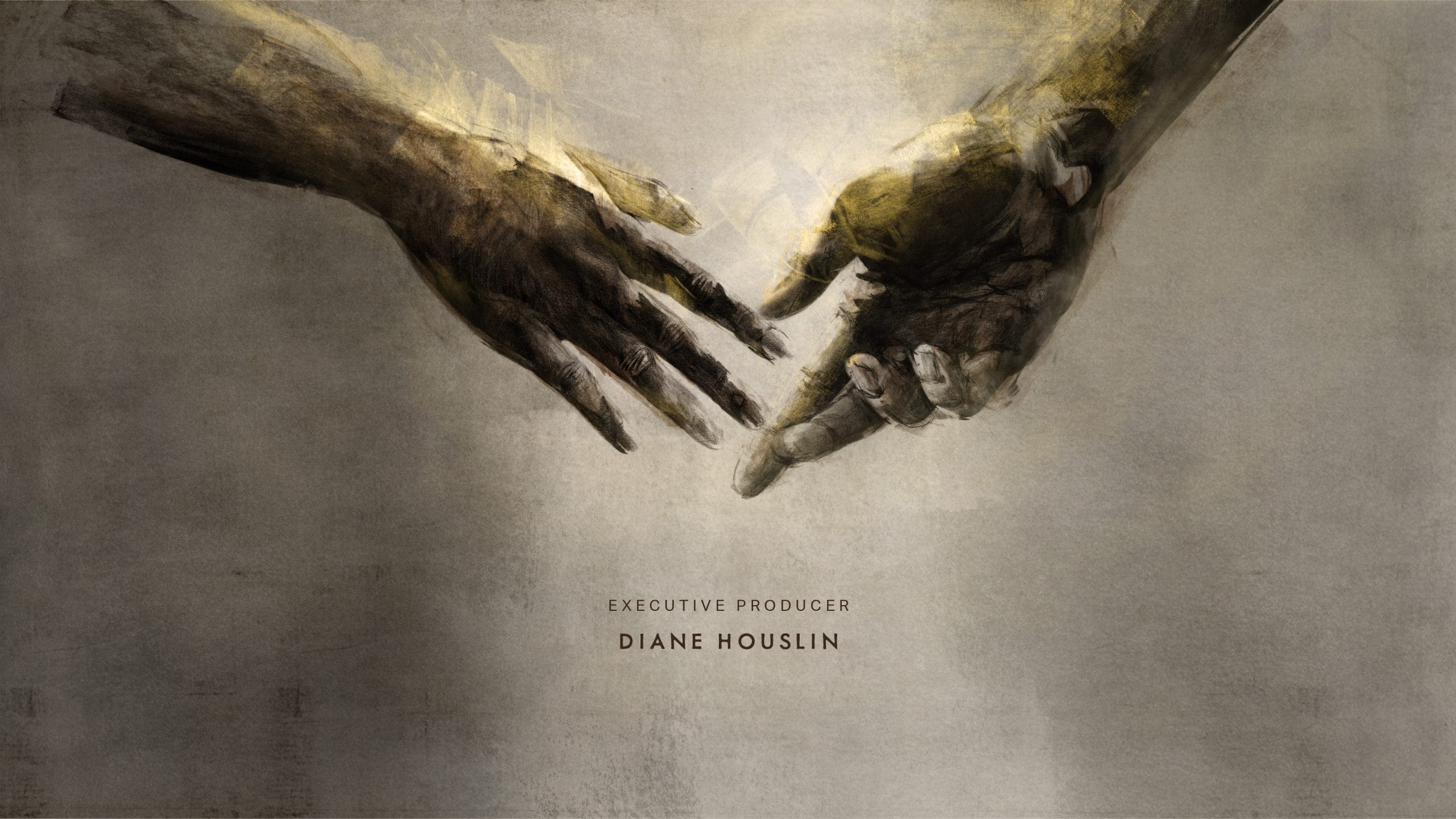 We are grateful to have worked with so many talented artists from around the world on this project – from New York, Los Angeles, Canada, to Italy. We look forward to continuing our evolution and seeking creative challenges with our fantastic partners. 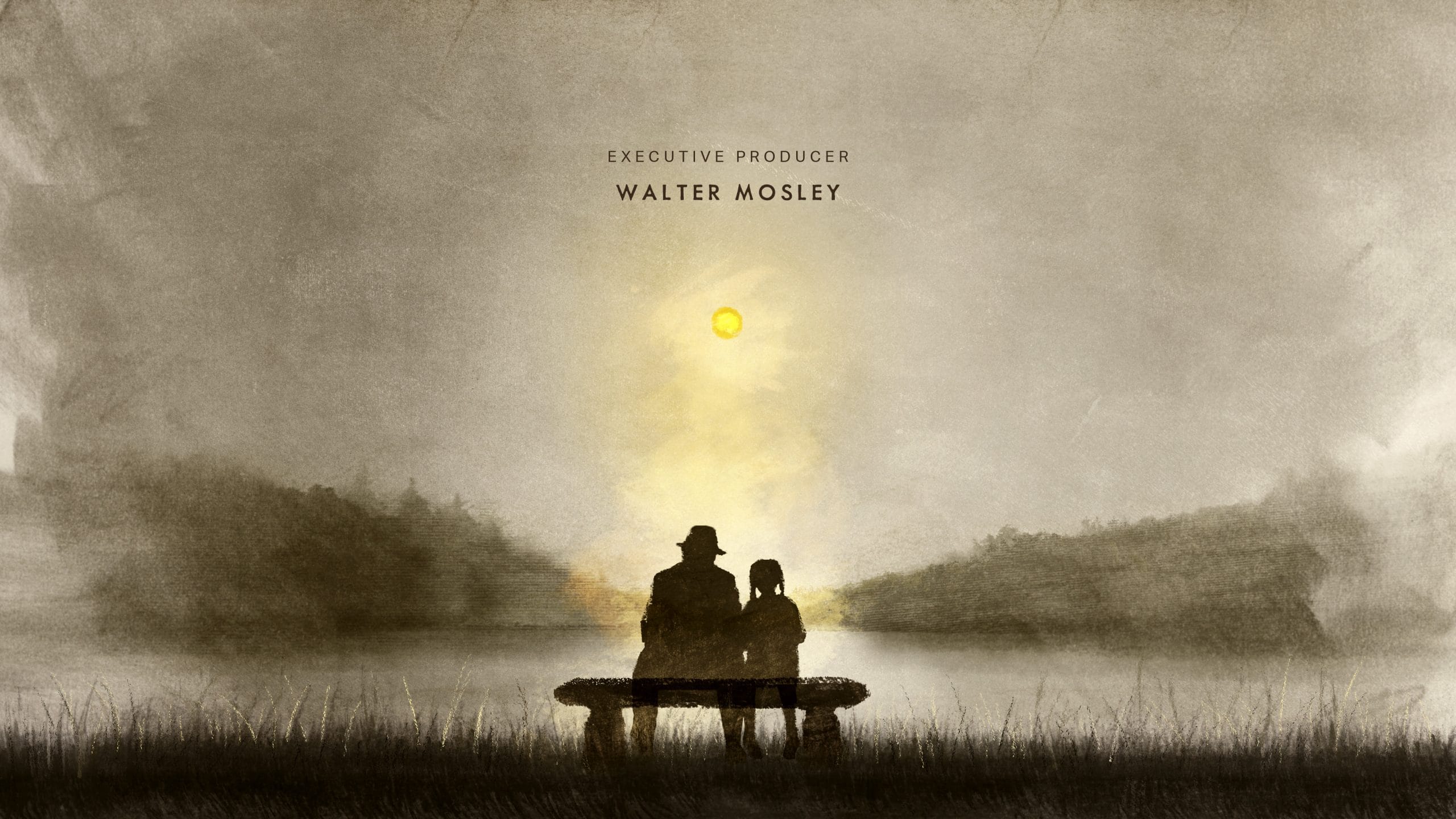