A few weeks ago, we announced our first-ever Ask Me Anything with our founder Carlos El Asmar. This was your chance to ask questions about Motionographer, The F5 Festival, and The Motion Awards, or anything else you’ve been curious about. 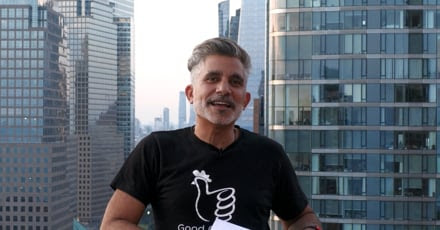 To be honest, Carlos wasn’t very excited about the prospect. This is a person who has spent decades behind the scenes, who has never had social media accounts, and if someone said the words ‘Tik Tok’ to him, he’d probably look around for Captain Hook.

And here we were asking him to take centre stage and perform so we can share it with our tens of thousands of followers. Needless to say, it took some corralling and cajoling, but we finally pinned him down long enough to shove a camera in his face and hurl your questions at him.

Even though he’d rather be anywhere else, and he flatly refused to do more than one take of every answer, by the end, I think he quite enjoyed it (though he’ll never admit it).

If nothing more, you want an Ask Me Anything to feel authentic and unfiltered,
and with Carlos, for better or worse, that’s always exactly what you get.

(Carlos is famous amongst his friends for making short stories long and speaking super fast. So, we edit it, and we’ve added some closed captions to help you follow along!)