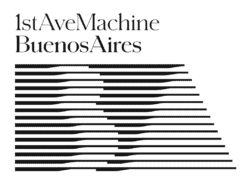 Following the partnership between 1stAveMachine and TRONCO to launch 1stAveMachine Buenos Aires, the new company has expanded its leadership team with the addition of Executive Producer Sabrina Elizondo.

Formerly an Executive Producer at Timber, Elizondo brings a transparent and solution-orientated producing style, always embracing new challenges to keep her eyes sharp and mind keen. Over her storied career, she’s served at the likes of WoodShop, Stardust, Brand New School, Arsenal FX, The Mill, Method, and more. In her new role, she will act as an international liaison, increasing the visibility of 1stAve BA’s capabilities across mixed media, live-action, and animation to the US market.

“After connecting with 1stAve BA, my little Latin heart fluttered in excitement at the opportunity of partnering with fresh Argentinian talent, not to mention the chance to perfect my Spanish,” explains Elizondo. “Each director on the roster has a uniquely remarkable voice and approach. Like me, they’re all driven to create great work and thrive upon developing lasting relationships during the artistic process. I look forward to further bridging the gap between the Buenos Aires office and US audiences.”

Versatile across a wide range of mediums, she has helped spearhead narratives for some of the world’s leading brands. Her most notable pieces include Kendrick Lamar’s “LOYALTY.” (featuring Rihanna), “LOVE.” (featuring Zacari), and “Humble” music videos. The latter was nominated for seven honors at the MTV Video Music Award, garnering six accolades including “Video of the Year” and “Best Visual Effects”.

According to Elizondo, “1stAveMachine has a wealth of talent and resources. I’m constantly inspired by the leadership team’s savvy knowledge of the business as well as robust pipeline that allows them to envision and carry out the impossible. They also excel in this sweet spot of operating efficiently while somehow always having the best possible time doing it. There aren’t many global production companies who actually collaborate as an intimate family and I’m thrilled to join.”

1stAve BA Partner and Director Tomi Dieguez adds, “Sabrina’s perfect for the job. If you give her the right tools, she could land a spaceship on the moon. Most importantly, she has the experience to seamlessly translate agency language into colorful pixel language, so to speak. As animation continues to surge, I can’t think of anyone better than Sabrina to represent the best of what the Buenos Aires production scene has to offer — from our skill sets and workflows to identities and culture — to the US.”