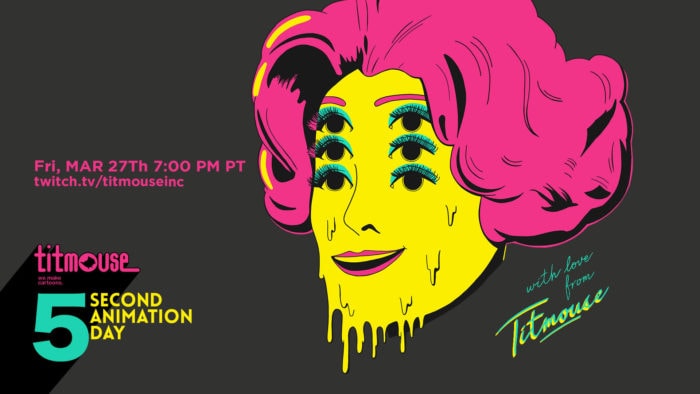 The 5 Second Day screening features more than 145 original shorts created by Titmouse artists from its LA, New York and Vancouver studios. NOTE: the shorts are not rated by the MPAA. The screening is intended for an adult audience.

Following packed screenings in Hollywood and New York, this year’s sold out screening in Vancouver was postponed due the COVID-19 group restrictions. Titmouse is working closely with the Rio Theatre to identify a new screening date once local and federal officials allow large gatherings to take place.

“We always want to make sure the artists’ films are seen by an audience!” explained Titmouse president and founder, Chris Prynoski. “When the challenges of this pandemic made it clear that our Vancouver screening was not going to be an option, I decided to beam it directly into the viewers’ brains! I was told that technology does not yet exist, so we are streaming it on Twitch!”

The longstanding 5 Second Day studio tradition – a day when the studio closes so staff can make whatever project is swimming around in their heads – came about as a way to make cartoons that we can all enjoy, but the tradition has evolved since it first came about in 2008. Since then, the complexity, length and creative collaboration across departments has skyrocketed. Some artists will work on ambitious ideas for months. In the end, the artists retain control of the short. To date more than 1,000 5 Second Day cartoons have been created. Take a look back at past shorts and discover why 5 Second Day is woven deep into the culture of the company.

Titmouse is an independent award-winning animation production company. Our artist-run studios in Los Angeles, Burbank, New York City, and Vancouver keep 700 of the most talented people in the industry (that are guaranteed 100% human) pushing creative boundaries. Writers, producers, directors, storyboard artists, animators, compositors, editors and artists are all right here, in house. Its state‐of‐the‐art sound studio is where many original TV shows, films, commercial work, branded and digital content projects are recorded. Titmouse founders Chris and Shannon Prynoski launched Titmouse in Los Angeles, the birthplace of the American entertainment industry. Known for series such as Venture Bros., Big Mouth, Superjail!, Black Dynamite, Tigtone, and Metalocalypse, Titmouse creates high-quality cartoons for all ages and interests. Visit us online at titmouse.net