At first glance, the H&M Conscious Films directed by photographer Bela Borsodi look like 100% hand-made creations. And they are. Kind of.

While everything was shot in camera, the pre-production and production processes relied heavily on some high-tech problem solving. Technical director Michelle Higa Fox explained the intense planning and “physical pipeline” that made the spots’ seemingly effortless choreography possible.

Watch the films, then read on for an interview with Michelle about the magic behind the scenes.

Based on the credits, this looks like it was a highly collaborative project. How did the job come about?

The project was extremely collaborative. Many parties lent their expertise, and we cannot underscore how important the entire team was to the success of the project.

The director, Bela Borsodi, has a good working relationship with H&M, and their previous project together, The Break-Up, kicked off their mixed-media storytelling collaborations. When the need for a mini-series on H&M’s sustainability initiatives arose, both H&M and Bela felt that a hand-made feel in both the illustrations and the puppetry of the art would reinforce the message of the importance of materials. 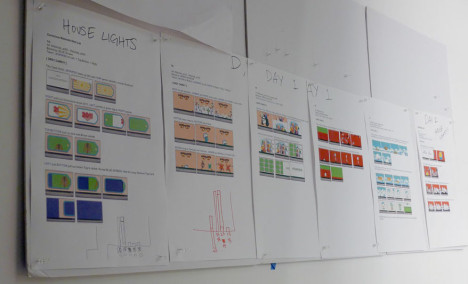 Wanted Media works closely with Bela and is a successful live-action/feature film company in their own right. They came to Mixtape Club because of MTC’s experience with animation and puppetry. Everyone on the team is a big fan of Yellow Submarine and practical effects, so when they heard those were the two guiding lights for the project, they hopped on board.

What was your role exactly?

I was the Technical Director, but not in the sense of the traditional 3D animation TD. I guess the closest job description would be a Pipeline TD, but I was dealing with a fabrication and puppetry pipeline rather than lighting, texturing or rigging. Our project architecture had to serve several departments simultaneously, so a lot of effort went into making sure all the files and systems were built efficiently from day one.

Keep that head down!

Curiously enough, a lot of the pipeline tools I created for this project, which was very tactile, are the same tools I use when working in “high-tech” interactive and projection mapping projects. They both require parallel pipelines that allow the creatives to see simulations of the final experience, while also doing quality control of the individual assets that are being used as textures or elements.

How did knowing that you were going to shoot everything practically effect the design process?

We had an embarrassment of riches in our art department. All of the illustrators are the cream of the crop working in NYC. Bela wanted a pastiche of styles, while also having every element have a hand-made personal feel. Art director Alex Mapar did a great job wrangling the review process and bringing everything together. 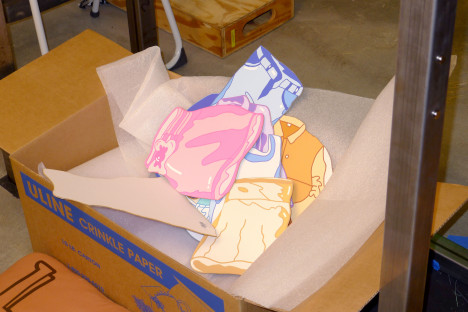 Illustrated props await their moment in the spotlight

Every piece of art was designed to be printed at 40 inches wide with extra bleed. From there, I worked closely with our fabricators at Razor Productions and animation leads David Hobizal and Erin Kilkenny to isolate the size and number of layers for each art element. It was important that each element could be either hand exacto-d or lasercut, so some beautiful designs had to go unused because the lines were too delicate or the rigs were impractical.

The final versions of everything actually consisted of three living files: the original layered artwork, the flattened custom cropping as it should be printed within a 40″ x 24″ canvas and the die-cut guide containing vectors for lasers and custom bleeds.

I’m guessing there was a lot of preproduction and possibly some prototyping. Can you explain the planning phase a bit?

One of the things I’m most proud of was the pre-production pipeline.

We were able to effectively pre-viz everything in After Effects. We matched the AE camera and 2.5D layers exactly so that our Photoshop files that went to print showed up in the After Effects’ “camera” as they would on the Canon C300. We were able to see exactly what kind of cropping would happen if a piece of artwork was slotted an inch closer to camera and adjust all bleeds and scales accordingly. 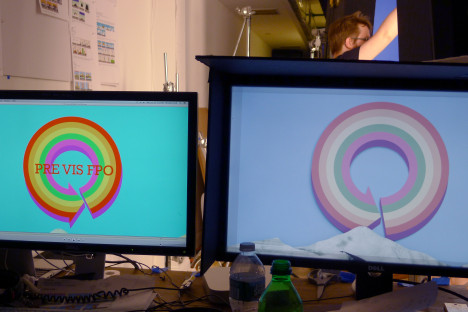 “We matched the AE camera and 2.5D layers exactly so that our Photoshop files that went to print showed up in the After Effects’ “camera” as they would on the Canon C300″

For Bela, we created animatics that illustrated both what the camera would see, and an orthographic view that illustrated how the artwork would be broken up and layered once it was printed. This was great for saving time with our illustration team. They knew exactly how much of any given mid-ground or background element needed to be fully illustrated.

The orthographic views also proved invaluable for the crew while we were shooting. We had several pre-pro documents outlining the choreography involved for each piece of artwork and hand models on all sides of the frame. Some of our ideas got tabled because we realized that it was physically impossible to get that many hands and bodies around the rig simultaneously. 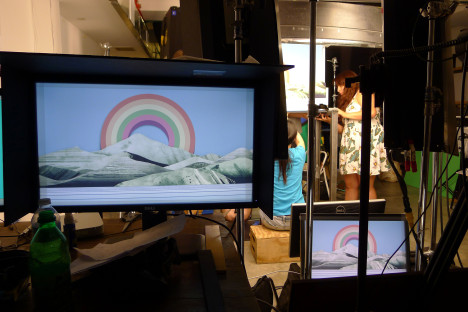 “Quite a lot of monitors and mirroring, but all very worthwhile on shoot day.”

On set we had playback of the animatics, orthographic views, countdowns to acting direction and live camera feeds going to both the director and the talent. Quite a lot of monitors and mirroring, but all very worthwhile on shoot day. 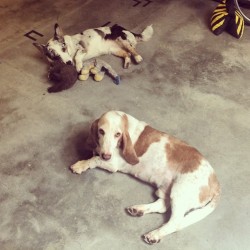