The opening sequence, created by Patrick Murphy and Elastic, was a delightful dance of visuals synced to the shenanigans of host Neil Patrick Harris. That alone would have been worth the watch. But the show went on to include a wide ranging slate of graphics anchored by handsome typography and thoughtful illustration.

One of the key people behind those graphics was designer/director Henry Hobson. Over the last 7 years, he’s been involved in designing on-air components of the show to varying degrees. This year, he teamed up with Elastic to create title sequences for 24 nomination categories — all in a matter of weeks.

Henry answered a few questions about his process for the Oscars and his career in general.

Bloomberg and Slate both ran headlines declaring that the graphics were “the best part of the Oscars” this year. How does that feel?

That all stems from the show’s vision and the producers, Neil Meron and Craig Zadan, along with Lee Lodge who shaped the creative.

The brief was really to keep it as visually interesting as possible, to make each category feel compelling and quick. I’m obviously happy that we were able to play a part in that vision. Seeing the show in rehearsal, it is spectacular without the graphics, too.

Speaking personally, it’s deeply edifying for me to see mainstream news covering motion design. Do you feel that motion design is stepping into the spotlight, so to speak?

Yes, amazing coverage. I’m proud of the work and the team. The best coverage was that Donald Trump commented on the graphics. The fact that he hated it proves that we did something right. 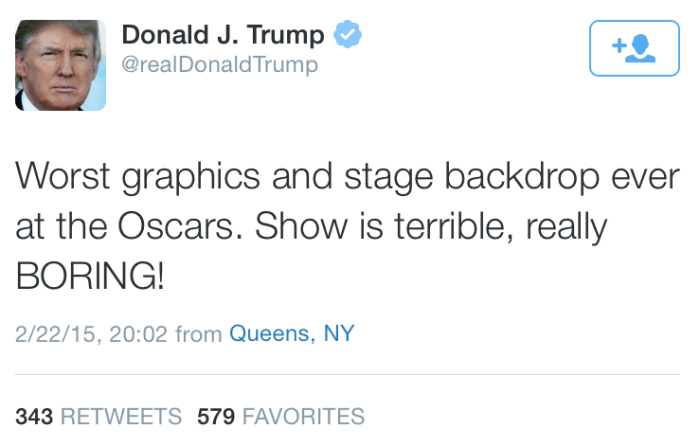 I think the large stage in which the Oscars plays out helps get that attention. But there is still a ton of great work that you only see online. Now the most important spaces are all on social media. People sharing the work and searching out what they like in online communities is equally as exciting.

You’ve been working on the Oscars in one form or another for seven years. Has the event’s approach to graphics changed in that time?

The last few years it has really changed. Lee Lodge (the co-producer of the show and creative driving force) comes each year and asks for the designs to be pushed further. (He is also the producer behind the creative look of the VMAs, CMAs, Movie Awards, Oscars and One Direction tour.)

Even when you think you have got the design right, he can always explain what needs to change to make it work for the production, understanding the way in which the broadcast will be shown and visually balancing the show. Each year, you nervously push a small amount, and it’s only been the last three years where a confidence and boldness has crept in.

This year, partnering with Elastic, the support was all encompassing. Whatever crazy idea i put forward, [Elastic Executive Producer] Jennifer Sofio Hall supported. That fact that we did a shoot for Production Design, when there was a risk the producers might not like it, is testament to the confidence in the thinking.

Did you seek out Elastic — or was it the other way around?

Elastic was found through Lee Lodge. He and I had chatted about our love for the True Detective title sequence. Last year, Rock Paper Scissors did the Best Picture edits, and I mentioned that Angus Wall ran both Rock Paper Scissors and Elastic. With the success of the VMAs with Patrick Clair and Elastic, Lee was keen on me partnering with Elastic.

Why don’t the Oscars have one person/studio do all the graphics for the entire show? Is it just too much to handle?

Technically, we had a hand in all of them. For Original Score, we only made a lower third for a separate piece of Academy editorial, so it doesn’t stand out graphically as much as the others. 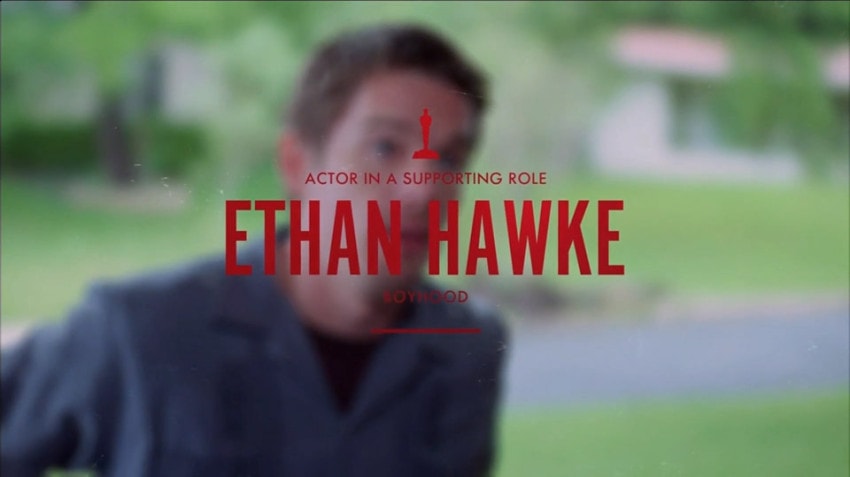 “For the Actor nominations, we took a different approach and typographically stamped each one. “

For the Actor nominations, we took a different approach and typographically stamped each one. Originally, the typography was going to announce each winner in that way, but Lee correctly called that it would be too much everywhere, and it looks far stronger on the actors.

It is a massive project and a very small amount of time with very high stakes. But with Elastic, we were able to tackle practically every part of it, even a lot of the screens on stage. Last year, The Mill did 9 categories. This year, Elastic did 24 (counting Acting and Original Score).

Patrick Murphy’s opening sequence was an enormous undertaking, with such a huge amount of 3D gags and spectacles. The team on that was almost as big as the show package team.

How much time did you have to work on it?

The nominations come out at the end of January, so you really only get a couple of weeks to turn everything into reality. It’s completely terrifying, working up 24 title sequences in a few weeks.

Your designs are elegant distillations of the films in each category. I think you’ve referred to them as “posters,” which seems apt. Is that how you approach the design process, almost like a print piece that can be pored over again and again?

In a way, I think also the solution comes from the brief: keep the nomination packages compelling interesting and short — and also pay tribute to the craft.

How can you show a film in two seconds that still reads as the film? The world of film poster design has evolved to be able to do that now, and it seemed like a great marriage, to tell the story of the film in a single frame.

Then, you build the transitions into that. So the Grand Budapest Hotel becomes a wanted poster which then changes to a top secret British government file decoded into The Imitation Game image. Or the make up designs, which show the before and after of the artists’ work.

Production Design was about highlighting to the audience what that category is. Before being a live action director, I was unaware of a lot of these roles, so it seemed like a great idea to tell a little story of that role within each still frame.

Regarding the small details in the design: yes, there are a few. Last year, we did the Wolf of Wall Street with a cocaine stock graph. This year, there is small bit of type that add further details about the films within the transitions — little referential easter eggs.

How did you work with Elastic? Did you hand them the style frames and let them do the rest, or were you actively involved throughout the animation process?

A bit of both, I was down there every day, actively involved. There were style frames from myself, Leanne Dare and Paul Kim. The animation was done by an outstanding team that shifted gears from one style to another at the drop of a hat.

The sequences changed a lot. The Production Design category changed three times, for instance, so I had to be there full on. The best Picture Animation was done in just a few days. It was split between five animators — the complexities of that, I could not wrap my head around. Without Carol Collins, who was producing at Elastic, nothing would have happened. So many moving parts needed strong organization.

You’re a live action director, too. Do you ever find yourself having to choose between live action jobs and motion design jobs? Is there a struggle between those two sides of your professional practice?

I was directing my first feature last year (out in May this year with Arnold Schwarzenegger), and while editing, I was designing last year’s Oscars. This year, I was directing video game commercials for Evolve (through Furlined) while designing the Oscars.

That skill set all comes from working with Why Not Associates in London, where you would direct something one day, design a stamp the next day, do a sculpture the third and motion graphics the fourth.

Budget aside, what would be your dream job/gig?

Design wise, title sequences are great to work on. They can be similar to the Oscars in the way that they allow for a story to be told. The budget is not always there, but the desire for creativity is.

Commercially, I have been fortunate enough to bring some fantastic video games to life with commercials for Resistance, X-Com and Evolve. I would love to push that even further with more stories

Will you take on the Oscars again next year, assuming they reach out?

Myself and Elastic would be honored to!