Everyone finds their own way into the ever-expanding house of motion design. Side doors, back doors, parachuting onto the roof — it seems any entrance other than the front door will do.

Director Graham Elliott is no exception. In his documentary, “New York in Motion,” Graham tells the origin story of contemporary motion design — which he both witnessed and shaped. His personal path from illustration to motion through the late 1980s to the current day is an inspiring tale of hard work, risk-taking and luck.

Here is Graham’s timeline in his own words. It’s a story of personal discovery told through evolving media and tools, and the vignettes below remind us that behind every interesting career is a person, someone trying to do something unique while expressing themselves and paying the bills.

The life and times of Graham Elliott 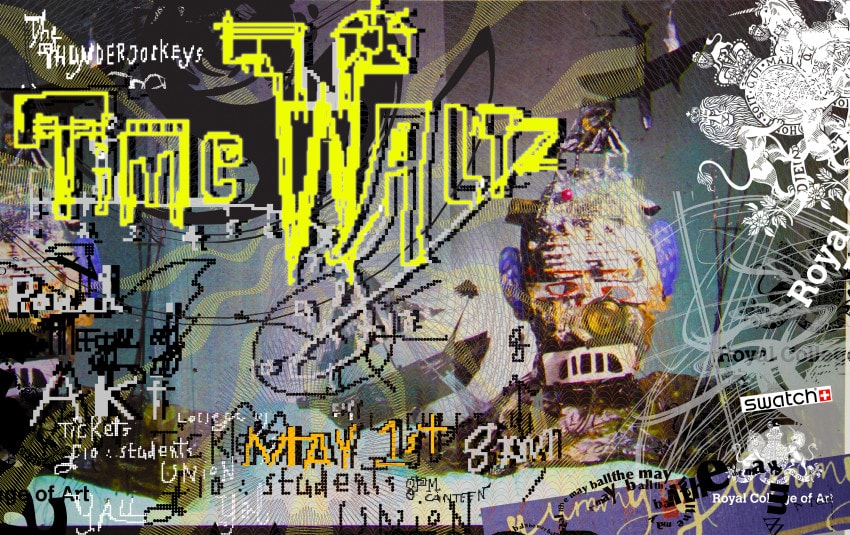 While studying for a Masters in Illustration at the Royal College of Art in London, Swatch ran a “Time and Motion” art competition. It was an opportunity to make a short film, so I teamed up with John England, a fellow student, who knew how to shoot and edit.

We became the “ThunderJockeys,” with a mission to “shake things up.” We made the short film “Time Waltz,” a kind of punk, time travel performance piece.  The show involved dumping 5 tons of sand on the floor of the college canteen.

The kitchen staff went on strike, but we won first prize.

It was an early, defining project, setting the wild tone of ThunderJockeys Inc. and a five-year collaboration.

One phone call triggered a flurry of activity:

“Hey, it’s Steve at CBS. I’ve got Vernon Reid here. He saw the postcard you gave me. Will you to do the album sleeve for his new band, Living Colour?” 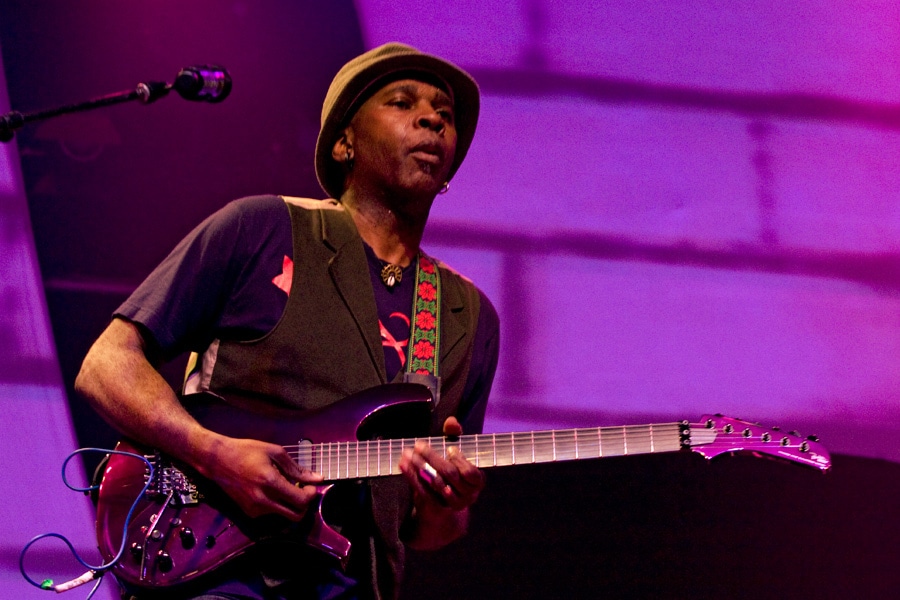 We did some new computer images and prepared the unnamed album mechanicals, ready to FedEx to NYC.

“Just slap in a type sample where you want the name to go,” Steve directed us. 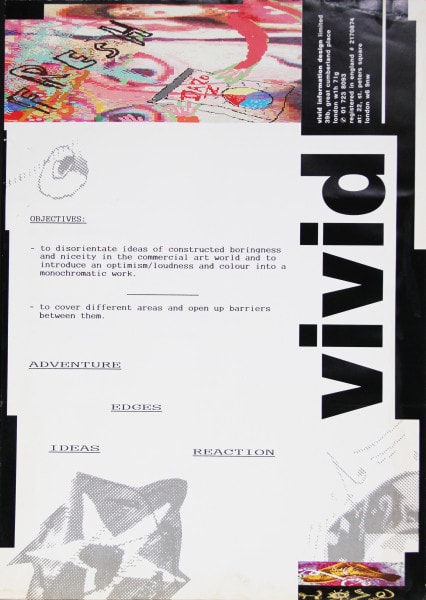 “Working out of a design company called Vivid, we took one of their letterheads and pasted it ‘for position only’ on the markup.”

Working out of a design company called Vivid, we took one of their letterheads and pasted it “for position only” on the markup. The band’s logo was not fully developed, so we dropped in a hand drawn sketch.

A month or so later, a package arrived. It was the final printed sleeve. Not only was the temporary logo used, they (we) had named the album “Vivid” and to our initial horror, used the type straight from the Vivid (the design company’s) letterhead. (Color was also spelled the English way, with a “u.”) 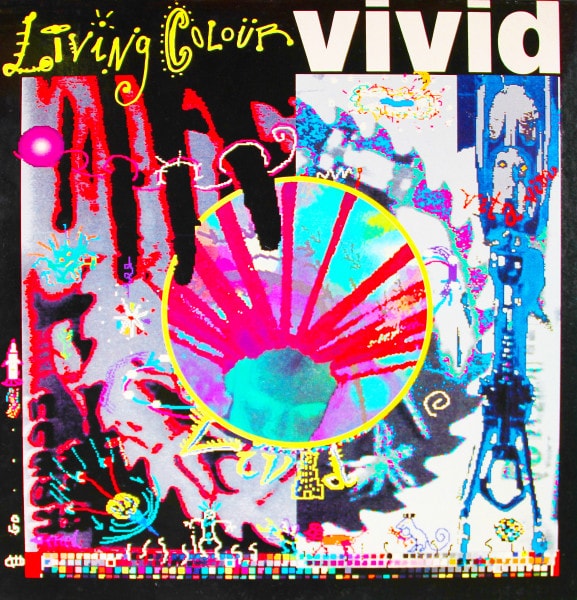 The Vivid album set the tone for a “seat of your pants” design style that would dominate our two-year working relationship. We had creative freedom, designing two albums, countless singles, 12” vinyl picture discs, merchandise and stage tour designs. 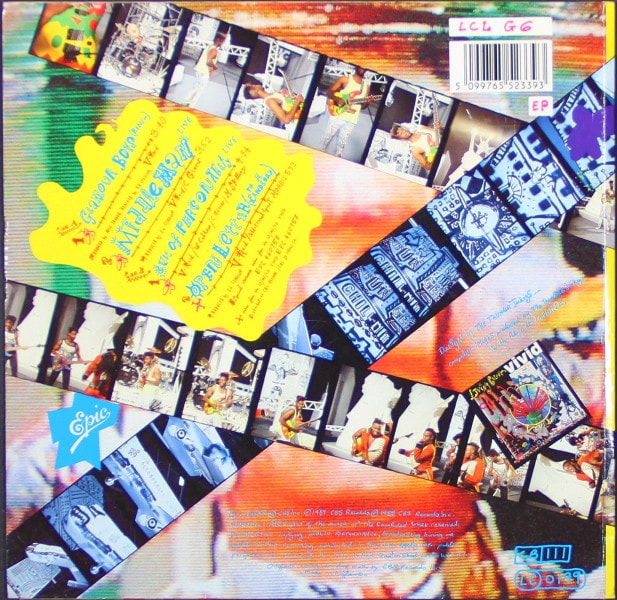 “Glamour Boys” cover art, with stills from the video

We’d made experimental films and animations but passionately wanted to direct music videos. We asked Living Colour to consider us for a video, but it was a long shot, without experience and a show reel. Eventually, they asked us to come up with a concept for an upcoming single, “Glamour Boys.”

It was about the ephemeral nature of New York’s nightlife. Our idea was based on someone choosing a head to wear before going out, rather like a Ken doll head.

On the set for the first time to direct a two-day shoot with the American band and a massive crew, we were soon out of our depth. It was nerve-wracking pretending we knew what we were doing and our first day was a disaster. The next morning, we went around to the crewmembers, individually, and asked for their help and guidance.

This is the way I still approach a live action set. 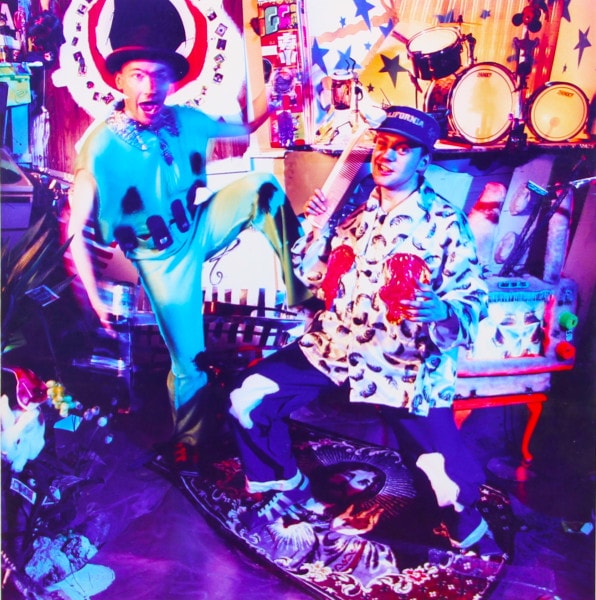 “ThunderJockeys in Space”, L-R John England and Graham Elliott in the space shed.

The “Glamour Boys” video was a hit and MTV asked us to come up with a series of extended promos.

We’d had this dream of doing a TV show, so we pitched the “ThunderJockeys in Space,” a low budget, Star Wars meets Pee Wee’s Playhouse vibe, which combined our performance work, set design and live action directing.

We’d act in it ourselves but needed a studio to build the “Space Shed.” The old accounts department at MTV was empty.

“How about we build the set there?” we asked.

We got a vague “maybe,” but decided to move in over the weekend, so there was no turning back. We made about a dozen surreal promos, which apparently were a smash hit in Thailand.

I was sitting in the stairwell of the Viacom building in Times Square, when an executive producer asked me, “Given no budgetary constraints, what would your dream project be?”

We were brainstorming for a campaign of Nickelodeon re-launch promos, away from the hustle of the Nick offices. Logo omnipresent, multi-cultural and kid-driven — those were the required components.

I took a deep breath: “Lets bounce a Nickelodeon beach ball around the world.”

She looked at me as if I was crazy. “That’s going to be really expensive.”

Two weeks later, I was on a plane with three massive Nickelodeon beach balls, two Bolex 16mm cameras and 80 rolls of film. The itinerary was: New York, Tokyo, Bangkok, Cairo, London, Paris, Senegal, and Guatemala. And three weeks later, back to New York.

I’d convinced Viacom I could pull it off for about the same price as a series of animated spots. The production value would be in the locations, and Id pick up talent as I went.

Apart from a guy on a camel stealing one of the beach balls at the pyramids in Egypt, everything else went pretty smoothly — until I ended up in ER with exhaustion upon my return.

The campaign won some awards and ran for a few years.

1996 / Red, White and Yellow and The wonder of After Effects.

In the mid nineties, an editor gave me a demo of a new program from CoSa. It blew my mind.

It was After Effects. Everything I had ever done could be manipulated on a timeline. Photography, illustration, typography, graphic design and live action all melded together. It was a collision of art and mathematics on a wondrous stage.

Around the same time, I was asked if I could do a title sequence for an indie documentary.

I spent a harrowing couple of weeks teaching myself the program while working on the job. The film got into a few festivals and was the start of a wonderful friendship with the program.

Some projects are born out of a need or necessity. I was going through a messy divorce with my wife, who was also my producer and business partner. At the lowest point of my life, about to lose my mind, I just had to get away. Away from everything.

Cuba came to mind. There was no advertising, no cell phones and little else. I arrived in Havana feeling I had lost everything. The average Cuban had nothing and couldn’t travel — but seemed so full of life.

After a few weeks, I began to ask why was I feeling so sorry for myself?

I befriended a rough but kindhearted tout who’d tried to sell me some knock off cigars. I asked him to take me into the parts of Havana the tourists don’t go. I wanted to find out what was behind the Cuban’s innate optimism.

He took me to some really run down areas, introducing me to his Santeria priest. The religion was very strong. Brought by the slaves from Africa and suppressed by the Spanish, it had survived centuries by its secretive nature. I realized it was at the heart of the Cuban psyche.

I knew I had to make a film, “Greyhound to Cuba,” about my experiences. (The priest had named me “Greyhound” instead of “Graham” during a voodoo ritual.)

Making the film got me through a really difficult time. The feeling that I’d lost everything gave me the courage to do anything and plunge myself into a harsh and dangerous world — but ultimately come out the other side, empowered, with a film and a story.

Motion graphics was becoming one of the most popular classes at the School of Visual Arts, New York. Teaching it for 5 years, I still couldn’t fully define what exactly it was.

I thought, “Why not make a documentary and ask other motionographers what they thought?” 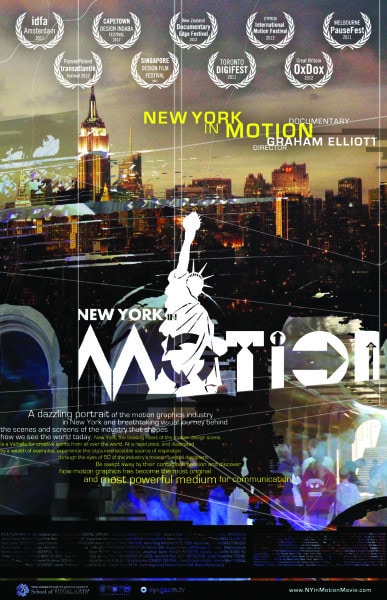 I got some backing from SVA and my students to help me shoot it as part of my class. Initially, I sent out 52 emails to studios, freelancers, TV stations, educators and journalists.

There was massive support, and I shot over a 3-month period. The originally planned 15-minute short ended up as a 2.5 hour rough cut. Boiled down to feature length, the film premiered at the SVA Theatre with an audience of 400 professionals and students. It got into a dozen film festivals worldwide, including the biggest documentary festival, IDFA, in Amsterdam.

Screening it at art and design events was interesting. But it was at mainstream film festivals doing Q&As that the revelation came: The film helped the general public put a face to the “invisible art of motion graphics.” Their reaction was something like, “Wow, I didn’t realize people actually sat and made these motion graphics.” Or, “Now I realize I see this work everywhere but didn’t really know what it was called.”

I realized motion defies definition and that’s what makes it interesting. I also saw how New York’s vibrant motion scene is driven, in part, by its strong freelance culture and resulting cross-pollination of ideas.

This hive of creativity attracts and affects designers coming from different countries. And it’s this aspect of how location and culture drives our creative output that triggered inspiration to start the next project. 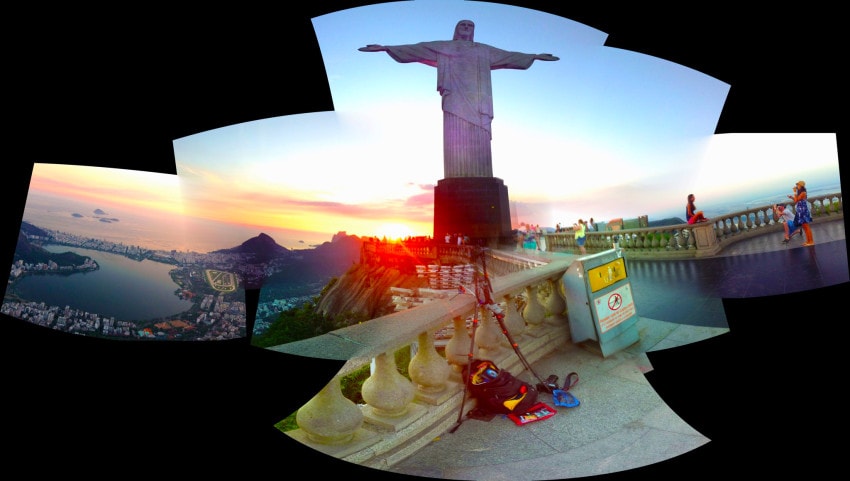 Shooting time lapse in Rio for World in Motion

The success of “New York in Motion” and its screenings and Q&As in Mumbai, Cyprus, Amsterdam, Beijing and elsewhere incubated a fresh idea: How about a “World in Motion” film series?

With motion graphics as a backbone, we will dip into other genres, such as graphic design, graffiti, film and music. How does location, culture and religion affect our creative output? Why is the color palette used in Southern India completely different from Northern Europe? How does a designer in Japan approach a problem compared to one in Brazil?

I am working on this ambitious long-term project along with producer Roswitha Rodrigues and Magical Monkey. Our first stop was Brazil and the edit is in progress.

Experimental projects still excite me. One ongoing project based around my fascination with dreams has no particular length or deadline: A film, performance or web-based-something that can adapt as new technology evolves. In a lot of ways it comes full circle from my early ThunderJockey works.

I will be premiering the first incarnation of “The Book of the Night” as a work in progress at the International Motion Festival in Cyprus at the end of March.