For the British Library’s “Magna Carta: Law, Liberty, Legacy” exhibition, director Gergely Wootsch explains the history and importance of the document with his trademark wit and style.

Rich blues and reds anchor the compositions, bringing to mind medieval tapestries and coats of arms, while watercolor-like textures and painterly brushstrokes ground everything in the same humanistic spirit as the great document itself.

Gergely was kind enough to answer some questions about the making of these two visual essays.

How did this project come about? Did the British Library reach out to you directly or did they go through Beakus?

The ​British Library got in touch with the studio directly. I think they liked the Penny Dreadful films we made earlier, which makes me assume they had their eyes on me from the onset.

Speaking of Beakus, how long have you been on their roster? And how did you find each other?

​I was signed in early 2012, shortly after I graduated. I was working there as a freelance character animator for a few months and Steve [Smith], the head of studio, asked me if I was keen on being represented. I said yes.

The total runtime of the two Magna Carta animations is over 7 minutes long. That’s quite long! Was that the original plan? If so, were you worried about the amount of work involved?

It should suffice to say, I was not unaware of the total runtime.

When we made the Penny Dreadful promos, it was a challenging project because of the time constraints. So here we were with a lovely museum commission referencing that very project stylistically — but with less resources available.

There was some considerable panic on my part, but luckily it all worked out ok in the end.

How long did the entire production take?

It was a long process but a relatively short production schedule. I knew months in advance we would be making the films, but the project picked pace up slowly.

We concluded pre-production (scripts, VO recording and animatics) before Christmas. Then I had a head-start for making the designs; production started the second week of January. We delivered the films the first week of March. I did feel like a marathon of a sprint.

Where did these spots “air”? Online? At the museum exhibit?

The two films are available online on the British Library’s website but I’m not sure about what future use, if any, they had in mind. There was a brief mention of using them as a learning resource, which would be quite cool.

Where did the script come from and how finished was it when you first saw it?

A close-to-finished voiceover script was provided by the client. I thought it was interesting how careful they were to get historical elements accurate. In a few cases, this meant the script ended up being too lengthy, so we suggested revisions, and they considered them. Soon enough, we agreed on a final draft and recorded Terry Jones [of Monty Python fame] at the British Library.

I spent a few days editing the raw recording takes to incorporate last-minute revisions. I did find piecing the VO track together an oddly enjoyable bit of the production!

I then responded to the VO script with a written breakdown of the shots (bit like story-beats) and created the storyboards based on these.

When did you start creating style frames for the project? And how did you arrive at your style?

We sent through initial design-frames before Christmas, and luckily the Library liked them. I had this idea of using painterly textures or strokes to allude to the Penny Dreadful films, which kept coming up as reference. But I thought using watercolour-like elements would help us depart from that world. Likewise, they were keen on keeping the mood more gothic but I didn’t feel that would work very well, after all, they had a younger audience in mind.

Stylistically, who or what were some of your inspirations?

I was doing a fair bit of research and found these great images of Medieval ornaments. I think most of the vibe comes from those. For instance, the idea of the border is a reference to this old famous image of King John on his horse. 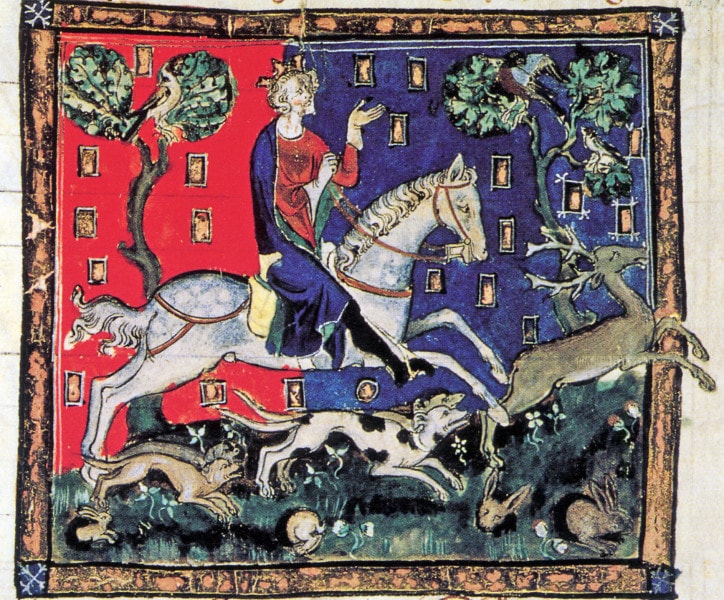 You’re Hungarian born, right? Hungary has produced many master animators, and it’s KAFF festival is hugely important for animation. Do you think your Hungarian roots influence your animation sensibilities?

I’m 29 years old. I spent 21 in Hungary and the rest here in the UK. I feel the past few years have had a bigger influence than the years preceding. It turns out moving to London was one of my best decisions. But perhaps sensibilities are more profound.

I remember this postcard from my childhood of Marcell Jankovics’ János Vitéz.

I loved the designs, in spite of finding it intimidating. Possibly, experiences like this bubble up when designing something related.

There are several visual metaphors throughout the project. That’s a hallmark of yours, I’d say. Those can be quite tricky to work out. Did you spend a lot of time on those?

No, not a great deal of time. I found some of the ideas Magna Carta sparked, such as the South-African passive-resistance movement, hard to pin-down as a single “lighthearted” image. So for instance, I thought about this tree as an element you could associate with the values of Magna Carta, if you fancied reading that into it. 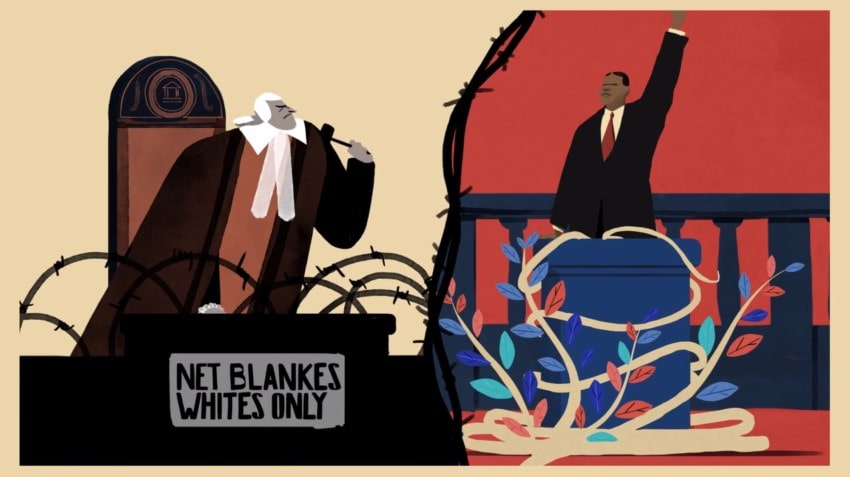 “I thought about this tree as an element you could associate with the values of Magna Carta, if you fancied reading that into it.”

Personally, it sometimes feels like cheating a bit, like saying, “Sorry, I couldn’t think of anything else. Have a look at this… tree!”

The painterly style is quite engaging, but it also looks very time consuming. How did you achieve that look?

Turns out feeding unicorn tears to animators increases work productivity. Also, everyone worked quite hard, and Marcus is scarily quick to block and artwork everything.

I developed some tools too to help with exporting from Photoshop and Flash in layers, which helped heaps when it came to comping.  The GW Export tool is now available.

Do you have a favorite moment? Why?

I like how the first film (“What is Magna Carta?”) turned out over all. There was enough time to plan and design it properly and I like how some of the character animation ended up. The second film was a bit more rushed, so my memory is less pleasant.

If time and money weren’t an issue, what would be your dream project?

I would love to make another short film and team up with a bunch of talented people.

What are you working on now?

Right now, I’m in the midst of planning my move to Barcelona. After the London solar-eclipse fiasco this morning, I decided I’ve had enough. (Kidding, kidding.) I was offered 6 months worth of work on a feature film there. After that, I’ll return home to London. It’s all very exciting. 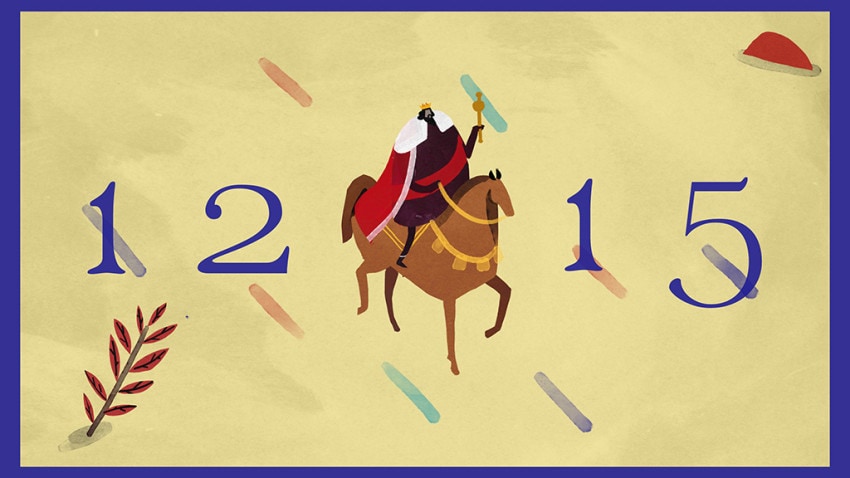 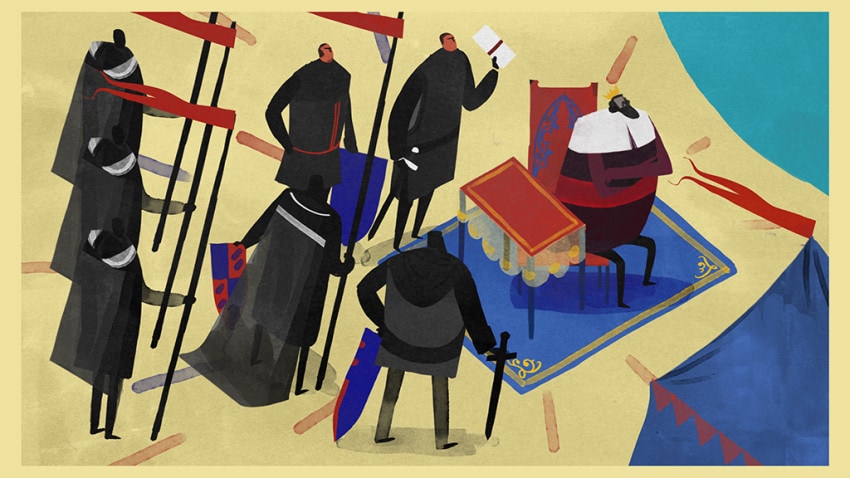 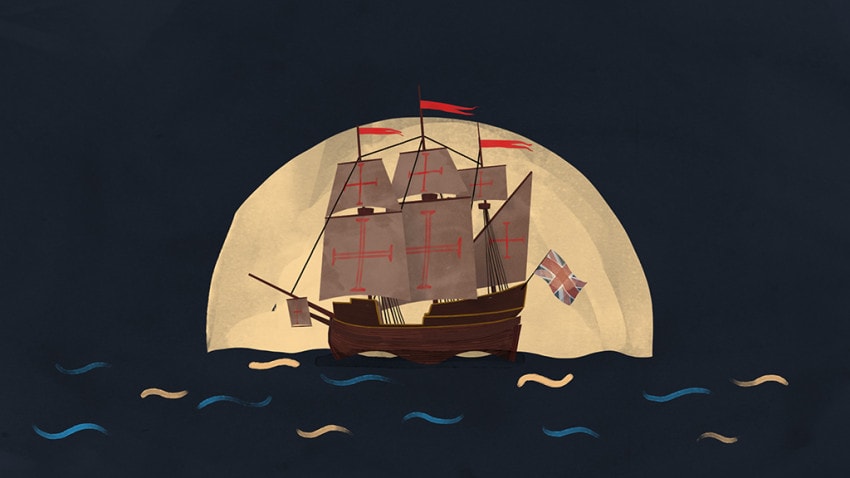 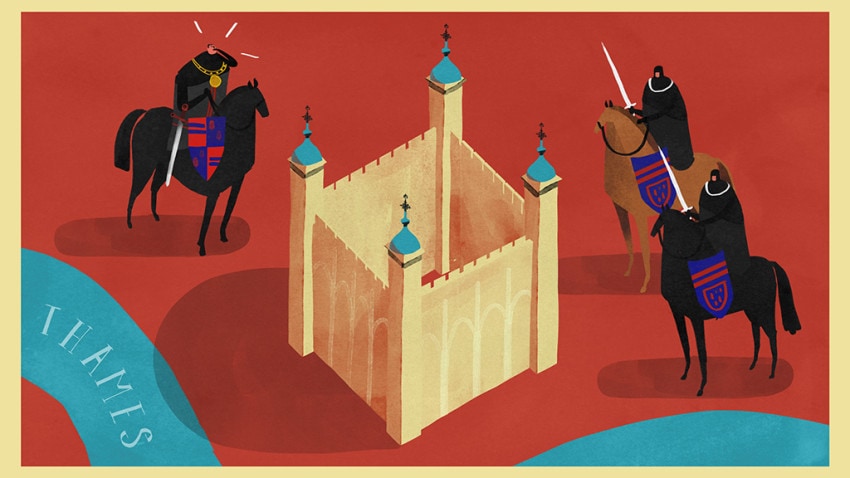