Italian-born designer/animator Lucas Zanotto’s career is as varied and playful as his creations.

Moving seamlessly between analogue and digital techniques, he’s created commercials, short films, apps and games that effervesce with child-like delight and wonder. He’s been posted on Motionographer over a dozen times, but we’ve never dug into his process to learn what makes him tick — until now.

I think the first thing we posted of yours on Motionographer was “The Ostrich.” Can you tell us about that short film? Why did you create it?

I was working with stop-motion animation a lot, and I wanted to explore something with a similar tactile and in-camera approach. I came across a marionette bird and was fascinated by the fragile movement you could achieve with it. I wanted to bring the whole marionette genre into a more design and minimal context.

Back then, there was a lot of low poly 3D stuff around, so I wanted to play with that look and build it in reality.

I basically just had the urge to make something free, with no commercial aspect — and “The Ostrich” came out.

It’s interesting to watch “The Ostrich” now in the context of your work since then. You can see the seeds of many things that you have explored: paper-craft; the seamless interplay between analogue and digital elements; character-driven storytelling and, of course, animals.

Even though “The Ostrich” wasn’t your first project, did you feel that it represented your voice somehow? Did it feel like it was pointing you in a new direction?

It gave me good PR, and I guess through that film some people started following my work. It definitely defined and showed a few things I am often aiming for.

It has a tactile experience, it’s trying to be seamless and perfect, but with little analog, unpredictable mistakes in it. Trying to explore media and combinations. Reducing and trying to express with less.

If we fast-forward a few years (and several Motionographer posts later), there’s another important milestone in your career: the creation of your first iOS app, DRAWNIMAL. My 2 year-old son loves that app. (I do, too!)

For people unfamiliar with it, can you tell us what DRAWNIMAL is?

The idea of DRAWNIMAL was to expand your device by using simple tools: pen and paper. Basically, you place your device on a sheet of paper. For each letter of the alphabet, you have simple line instructions to draw around the device. By pressing play, you reveal an animal and get a little animation.

DRAWNIMAL motivates children to draw around the device and encourages them to think outside of the box. The app helps them leave the digital screen with a simple physical interaction.

Taking on the challenge of creating an iOS app is, for most people, an intimidating task. Did you already know people who could help with coding the app? Or did you code it yourself?

Through a friend, I got in touch with the programmer Niels Hoffmann, who was interested in collaborating on the project. After that, Ulrich Troyer, an old childhood friend of mine, came on board to deliver the great sound design.

The design process required keeping a square as a base and trying to add as few, simple lines as possible to characterize each animal. It was a fun process.

What was the most challenging part of creating DRAWNIMAL?

The biggest challenge was to find a number of animals that cover the alphabet in five languages. We managed 35 animals, covering English, Spanish, German, Italian and French. 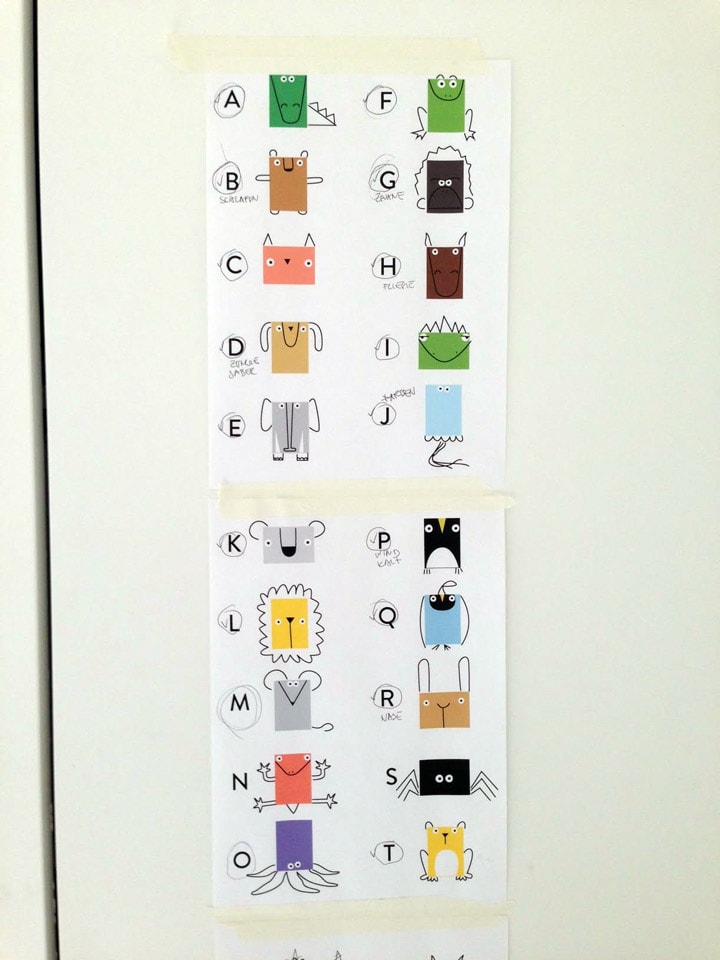 Another big challenge was to create a simple but clever interface and user flow.

Drawnimal was a huge hit with the press, and if I recall correctly, it was featured by Apple. Did you expect that? Did it create any challenges for you?

The morning I looked on my iPad at Apple.com and saw DRAWNIMAL on the new iPhone TV commercial was a big moment for me last year. 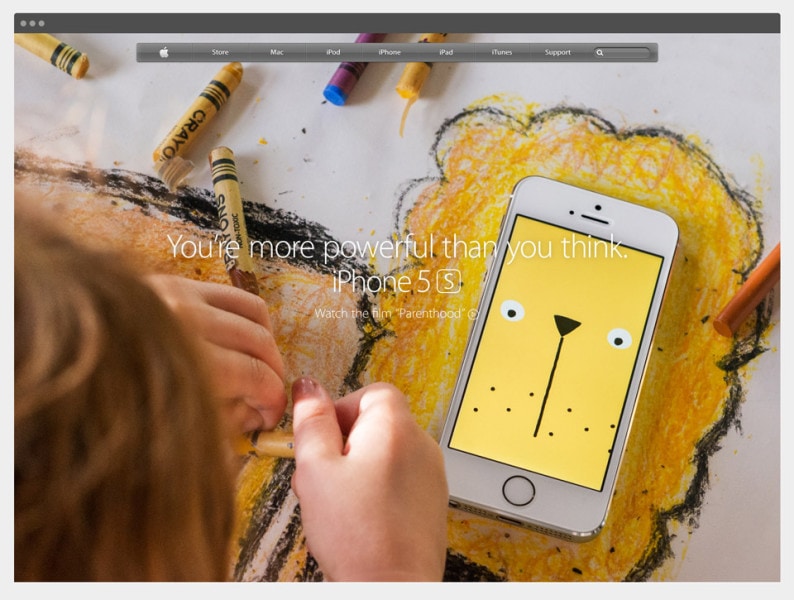 DRAWNIMAL was featured in an iPhone TV commercial and on the Apple.com homepage

It kind of meant we’d got the Apple-approved stamp, and it felt incredible. It also gave us huge PR and somehow told me we were working on something special. I didn’t expect it.

Mostly, I just wanted to do the app because I had this idea and wanted to hold the product in my hand.

Was DRAWNIMAL a profitable project?

DRAWNIMAL is a completely independent personal project. There is no client, investor or third party involved. Considering these points, it was very profitable. The biggest profit was the feedback we got from it and the chance to create a brand like YATATOY.

After DRAWNIMAL, you created MIXIMAL, right? How was creating that app different than your experience with DRAWNIMAL? Had you learned any lessons that you applied to MIXIMAL?

Yes, after having this little team working so well together it felt natural to start a new project. MIXIMAL seemed a nice little idea to have as a follow-up app to DRAWNIMAL. It worked a lot smoother as we learned a lot about our workflow through DRAWNIMAL.

It seemed clever to put the apps under one brand. I looked around and explored different options. YATATOY was the winner.

It was great fun to work on our own brand and define the look and feel of it. The apps’ style and names somehow came out naturally, and I think they are very genuine. The whole YATATOY brand packaged it together in the same way. Somehow, in the moment, it just felt ready.

Your latest project “Barclays Code Playground” is very interesting. Can you explain the project for us?

That was an amazing experience and a fantastic project produced by Passion Pictures London. BBH worked on the Barclays Code Playground project and were looking for someone to direct and design some TV commercials and kids “games” for them. It was a great opportunity and challenge.

Barclays is offering workshops for kids to get into coding in a playful way. The TV commercials were aimed to be special, outstanding, different, nerdy and slightly odd — but still cheerful and genuine.

Did you work on the design of the actual code playgrounds?

I designed about seven “games” for the shoot and for the commercials.

You’re a dad. How has having a child changed your work?

Having kids definitely makes time management a challenge, but it actually helped me to focus and organize my calendar better. I have to admit: I became a lot more productive since these two little princesses came into my life. 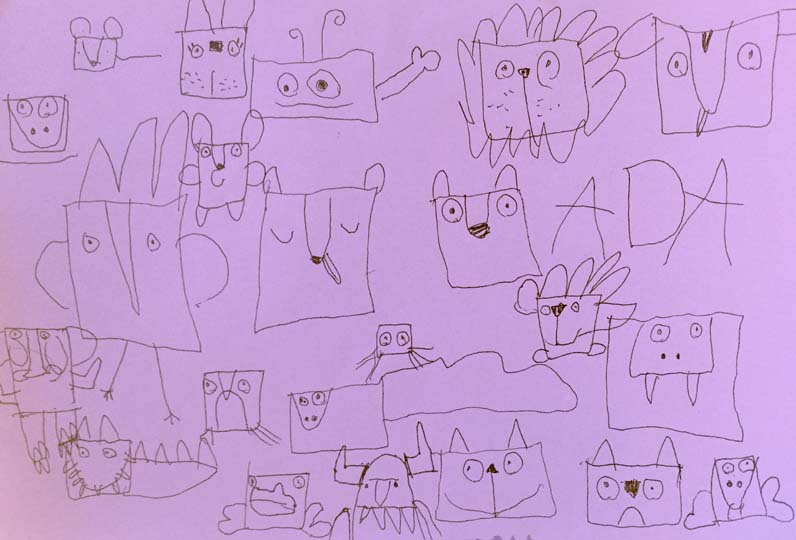 Some design work from one of Lucas’ daughters

It’s fun to play with them and build funny things together. Often, the things we experiment with are reflected in my work.

Do you find it difficult to balance work and life? If so, how do you manage it?

It helps me that I work mostly from my home office and that I don’t have fixed office hours. This gives me more freedom to arrange time and also spend more time with the kids. It’s challenging when I’m on a conference call, if one of them suddenly runs in and wants to see who is on the screen.

You live in Helsinki now, right? What brought you there? And what’s that like?

We moved here after seven years of living in Berlin. My wife grew up in Helsinki. We wanted somewhere smaller to raise the kids, so Helsinki was a great option as it’s a good city to live in with our little family.

It’s somehow a fun combination of capital and countryside at the same time. You have great nature around and a hip restaurant in the same place.

What I find interesting about you is that you can hop from apps to TVCs but you don’t make a big deal about it. You’re “re-inventing” yourself, your just making playful, fun work across media. Do you feel that way? Or do you feel that you’re consciously trying to redirect your career path somehow?

I actually don’t have a big concept or theory behind my work or direction. I think it’s just honest – it’s what I like to do and what I find appealing. TVCs or apps; these are basically just mediums.

It’s the way you apply your ideas to these mediums that counts. I think by trying out things and looking around a lot — getting inspired — you automatically develop and reinvent your self.

What are you working on now?

We are about to launch a third app with YATATOY, and I am very very excited about this one! I’m also working on a few commercial projects at the same time.

What would be your dream project?

I think I would like to make an independent movie, bringing in some subtle in-camera tricks and animations.

What advice can you give designer/animator/storytellers who want to create an app or an interactive experience?

To team up and try it out – it’s not as special as it seems. It’s achievable, but I have to warn you that it’s a long journey as well.