If you’re working in motion design and reading this page, chances are you’re also subscribed to the Wine After Coffee channel on Vimeo.

There’s also a good chance you’ve heard the name Jorge R. Canedo Estrada. In addition to being a wickedly talented motion designer, he’s the founder of Wine After Coffee and co-founder of the upcoming Blend conference in Vancouver.

The story of Wine After Coffee’s success resonates with me on a personal level. Jorge’s obsession for collecting and sharing is very similar to the obsession I channeled through Tween, Motionographer’s predecessor, in the early 2000s. We both “accidentally” created followings as a byproduct of our obsessions.

The story of Wine After Coffee and the Blend conference is a story of collaboration and the organic (but rapid) growth of a community that has spilled over from the online world into real life. It’s shot through with the earnest, humble attitude that makes Jorge an affable guy and a natural leader.

Q&A with Jorge Canedo Estrada, creator of Wine After Coffee and co-founder of Blend

We’ve been describing B​lend​ as a two­-day festival in Vancouver on October 16 & 17. A conference-­style party for our creative, design and animation loving family, with some of the most amazing doers and makers.

We j​ust want to gather​ this awe​some animation and design community together in one place for two days, to hang out and hear from some of the most talented people — and in saying that, we’re referring not only to the speakers, but to those attending the event too.

We wanted to create an event here in the Pacific Northwest that felt like home for all of us.

There are amazing festivals out there, F5 being one of the coolest (ahem, ahem) — but we felt that we on the west coast were missing something similar. We wanted to create an event here in the Pacific Northwest that felt like home for all of us.

Where did the idea for Blend come from and what is its relationship with Wine After Coffee?

To fully tell the origins of Blend, we need to talk about the origin of​ Wine after Coffee.

The story of Wine after Coffee

I’ve always had a thing for collecting and sharing awesome stuff I found on the internet. To this day, I use it as a way to c​ompare​ my work with what’s out there; it serves as a slap in the face, to remind me how far off from making really awesome stuff I still am.

So by the time I was working at Buck in 2010, all I would do with the stuff I found was to save it in a folder or just share with Claudio Salas (who was sitting next to me).

Since most of the best work was being posted on Vimeo by then, it only made sense to just start a channel, as a way for me to share those cool videos with him, and maybe a few others . Little did we know that people would actually start subscribing to the channel!

Evolution of the Blend logo

Wine after Coffee was born in 2010, and Claudio Salas was the second contributor. I knew he had amazing taste and we always ended up sharing videos with one another while working together at Buck.

The idea was simple: a channel filled with the best of the best, stuff that humbled us and reminded us that we’re still a long way from creating work that is amazing.

Why did you name it “Wine After Coffee?”

A lot of people ask why it’s called what it is, and to be honest, I don’t completely remember the reason for it ­ but here is what I do remember: I love wine and also coffee. And I really enjoy a good cup of coffee in the morning and a glass of wine at night, in a similar way that I would enjoy a good video first thing in the morning and again before going to bed.

How did the channel grow?

Over time, we started inviting and adding moderators to the channel, and they too started adding more awesome content to the channel. Today, we have 30 moderators, over 3,000 videos added and around 8,700 followers.

Wine After Coffee's venerable board of moderators

So how did the idea for Blend come about?

One amazing thing that started happening because of the Vimeo channel was that we began connecting with some of the people involved in cities all around the world, in real life.

Sander van Dijk emailed me one day saying, “Hey, it’d be cool to meet you!”

In a lot of our conversations, the idea of bringing Wine after Coffee to the real world kept coming up. In 2013, we were really close to starting a little monthly gathering for motion designers in Vancouver, but it never ended up happening.

More recently, this pattern happened again, but this time with Marisabel Fernandez. She was interning at Giant Ant and she brought the idea of a real life event back to life in my mind, especially after she said that F5 basically changed her life.

We h​ad ​to do something. So conversations began again. Claudio, Sander, Marisa and I, were part of all of this. Shortly after, we made a little video asking people for their input in a short survey, and we saw a real excitement and desire for something like this to happen.

After the survey, we started getting emails from people who wanted to see this happen and wanted to be involved. One of them was Caspian Kai, who helped to make Pause Fest in Melbourne happen. So we met up with him, and he joined the team, bringing his experience with him.

And as a final (very important) puzzle piece, Teresa Toews, a producer at Giant Ant, kept hearing about the festival and offered her help. And we desperately needed someone like her to make this happen.

We’re trying    not to have any big names behind it — trying just to break even — and hoping to create the festival that each one of us would love to attend.

And where did the name come from?

We had a few ideas of what to call it, but Blend just felt right. It was just the perfect word that described Wine after Coffee. And ever since our first meeting, we’ve been trying to do something we don’t know much about but have a lot of heart for and excitement in.

W​e’re making a​ festival for the community, by the community. And so we’re trying    not to have any big names behind it, trying just to break even, and hoping to create the festival that each one of us would love to attend. 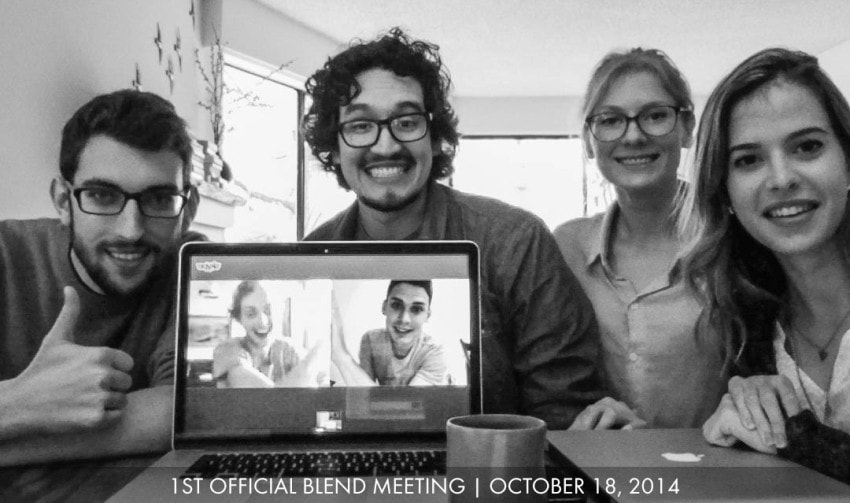 So many collaborative projects happen in our field, so many pieces are made just for the love of it, and that’s something I think we can all be proud of.

And I think it’s because a lot of us learned from someone else who just wanted to help out.

What have you learned through Wine After Coffee?

The main thing that drove me to create Wine after Coffee is the same thing I realize every day: There’s still a long way to go, much to learn, and lots of amazing work to be done.

One thing that was a happy surprise from Wine after Coffee was to see how truly unique the people in this field are. It seems like ever​yone’s ready to share, to learn, and to just get better at what they do!​

So many collaborative projects happen in our field, so many pieces are made just for the love of it, and that’s something I think we can all be proud of. And I think it’s because a lot of us learned from someone else who just wanted to help out. Or, you know, made a blog that was just about motion graphics…

Where do you think our industry is headed and what role does Wine After Coffee and/or Blend play in it?

We can make all sorts of predictions. I think there are certain trends that are pretty obvious, though some might be more of a passing trend.

But independently of that, the heart of Wine after Coffee and the heart of Blend will always stay the s​ame: to become a place, online and offline, where people from all parts of the world can come to share awesome work, get inspired, learn, and collaborate.