In 2012, Buck and The Mill each released jaw-dropping spots for the charity bookseller Good Books, casting a long shadow on whomever had the courage to take on the next project in the series.

20 months later, the team emerged with an ambitious 3-minute film that marked new territory for them. In an exclusive interview with Motionographer, they shared insights gleaned from their long journey from concept to completion.

In-Depth with Plenty: “We Need to Talk About Alice”

In the past, String Theory has supplied whimsically surreal scripts for Good Books. Was that the same for this project?

Yes, the agency sent us several scripts at the beginning of 2011, before Buck and The Mill published their amazing spots.

Back then, we weren’t able to take on the project due to scheduling and budget issues, but they contacted us again in 2013 and offered us this script about Alice in Wonderland. It was very short, with voiceover and character voices, kind of like a play.

They believed this script was a perfect match with our style at Plenty, and we fell in love with it the first time we read it. So we took the job. 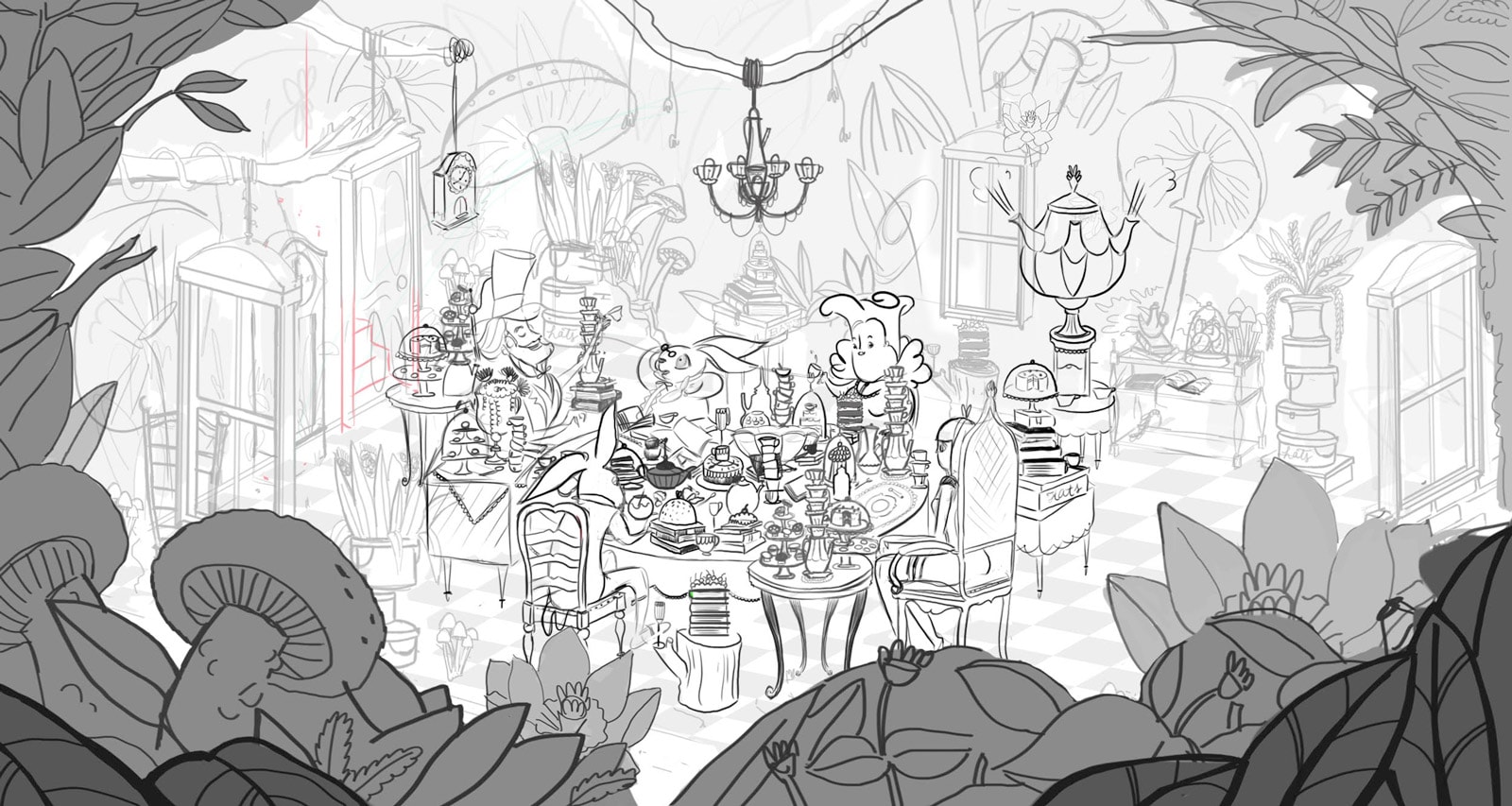 We worked to adapt and enhance the script in order to create hallucinogenic situations in a surreal context where Alice imagines weird things provoked by her smoking with the Caterpillar (which is revealed at the end.)

Creatively, how much freedom did you have?

We had total freedom, and we’re eternally grateful to the guys at String Theory for that.

We agreed on everything, except the original duration. We had decided would be 4 minutes and they asked us to lower it to 2:30 minutes, which ended up being positive for everyone involved!

String Theory did the voice-over work and then Liquid Studio developed the amazing soundtrack. 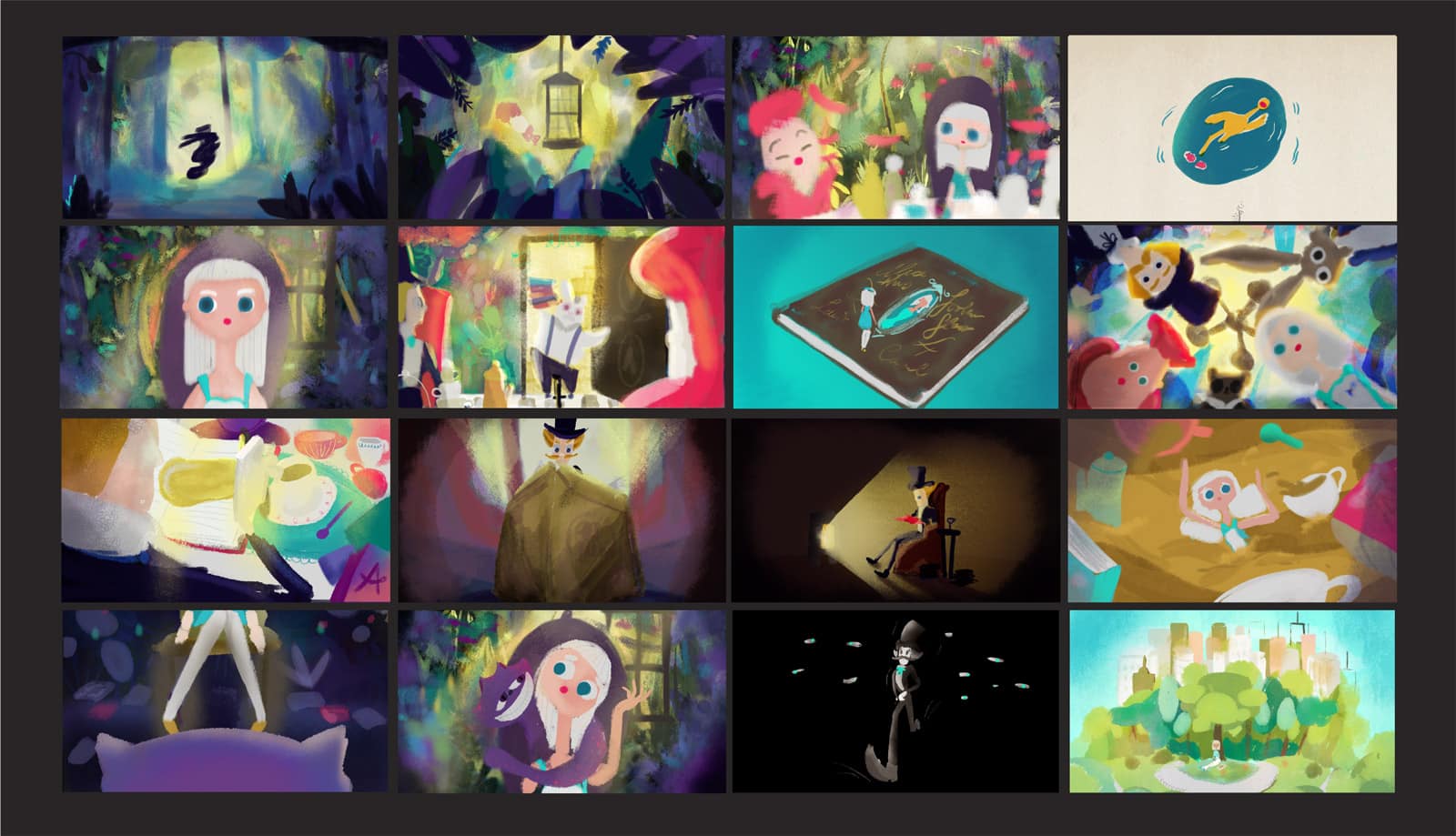 The color script for "We Need to Talk About Alice"

Were there any ideas you really liked but ultimately had to leave behind?

We wanted to do a very complex sequence shot that involved a lot of 3D fluid calculations but, ultimately, we had to make it simpler. We didn’t destroy it, but what we originally wanted was much more complex.

Anyway, the reason it took so long to finish the project (20 months) was because we didn’t want to sacrifice anything!

What was the most challenging aspect of this project?

Our top four would challenges would be:

1. The pipeline and workflow

In the main scene, for example, there are 110 objects just on the table, and each one, as well as the characters and the rest of the assets, were digitally hand-painted, one by one.

The film has close to 50 shots. Since there was no client (in the traditional sense), there were no limitations or a client’s final ok, so as time went by, we came up with new ideas — and that meant changes to the film — and these affected the workflow.

We had never done anything like this — animating a 3-minute film with such a level of complexity.

A long project such as this one brings with it team issues, especially when it’s a small team such as ours and without many resources. Hopefully, we don’t make movies! ;)

The characters’ acting has a key role in the film. They had to speak and move in a convincing manner.

Making it your own

What was the thought process behind the decision to go back and forth between CG and 2D?

The script originally had only one scene: tea time with a table and four main characters.

We were worried that it would be monotone in terms of the aesthetic, so we added inserts — Alice’s hallucinations. We tried to create a break in the graphic language, representing first the inside of the Hare and later the Mad Hatter’s psychotic break, which was situated under the table, a dark place that allowed us to change the visual language.

The CGI render was also flat, kind of illustrated, so merging 2D and 3D was easier. Our transitions softened the barrier between both aesthetics, too. 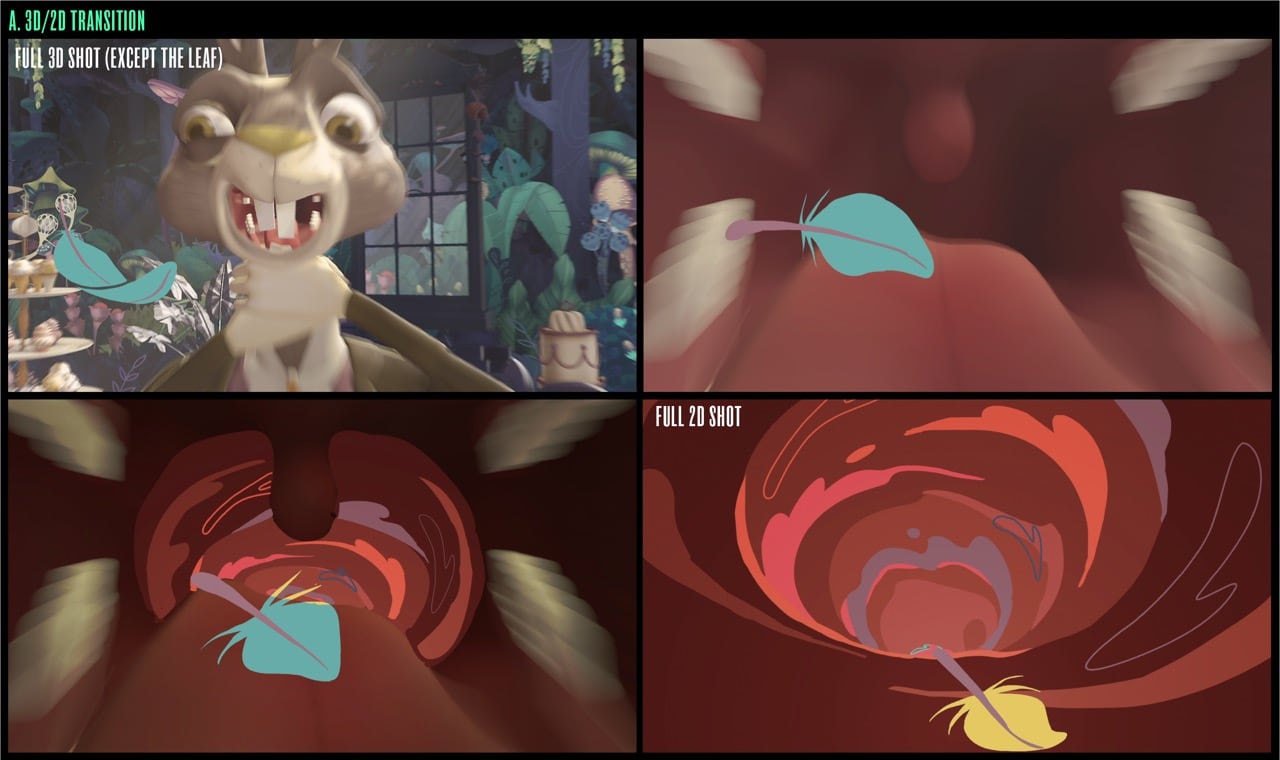 The stylized, flat CG renders eased the transition between 3D and 2D 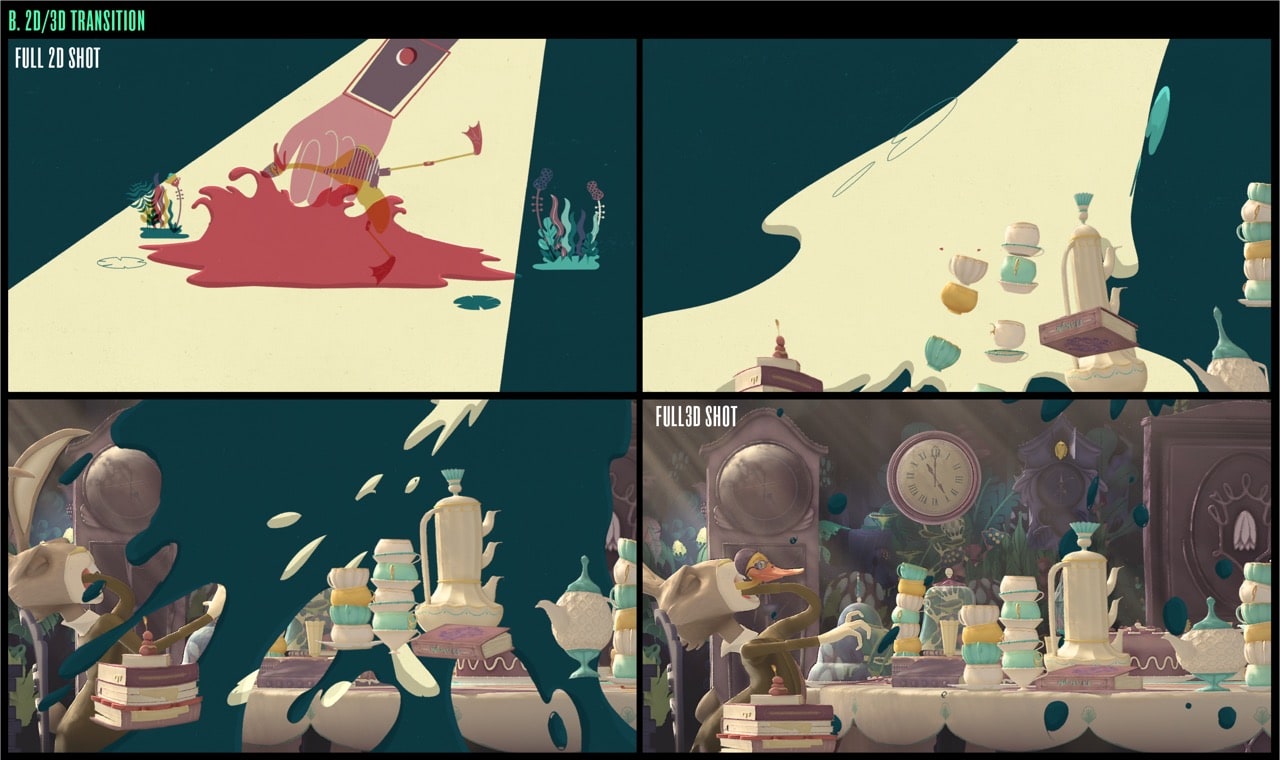 We also did something new for us: frame-by-frame animation cloning by painting over 3D objects in Photoshop. Here’s a background transition using this technique: 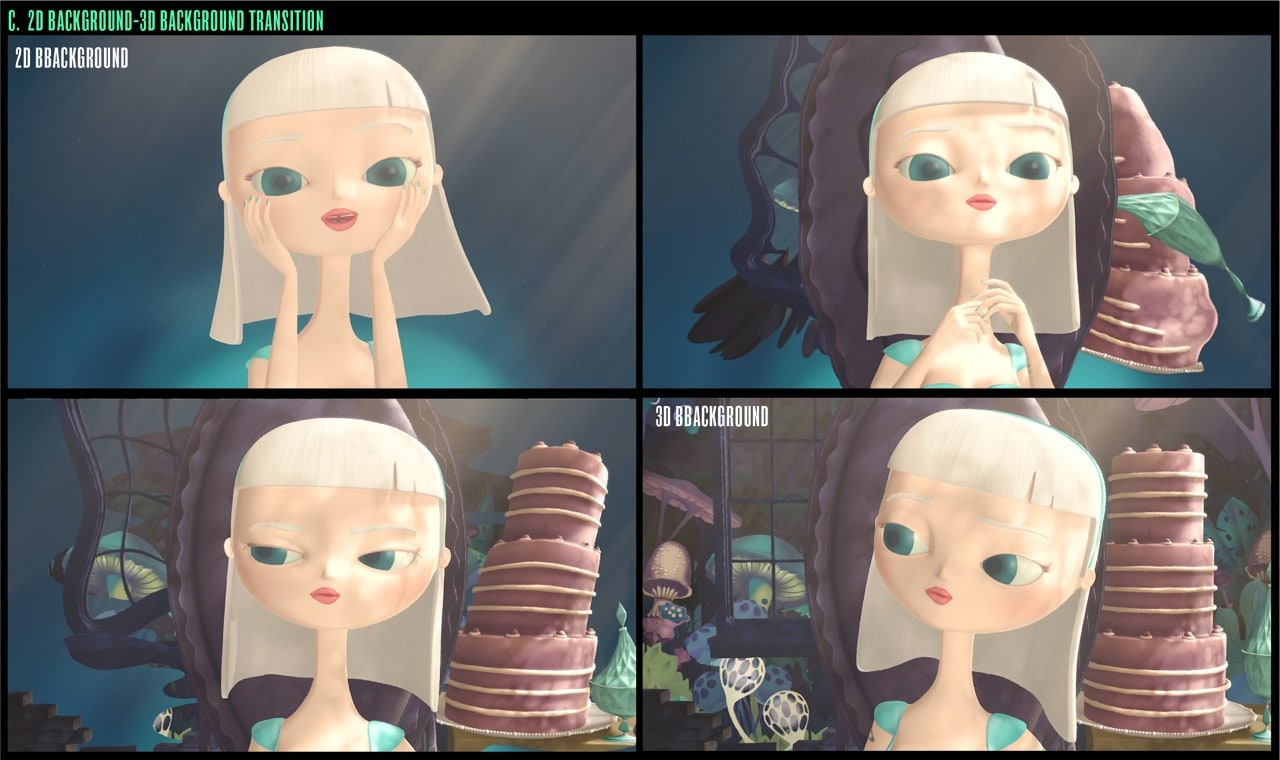 The camera work is excellent. It really adds to the mayhem of the scene while still elegantly directing the viewer’s attention. Did you guys work out most of the camera moves in storyboards or did that come later, during previz maybe?

Thanks, and good question!

The size of the table and the huge amount of objects on it changed a lot the framing. We didn’t want to have the camera movement as a protagonist all the time — just in a few sequences to add chaos or confusion to the audience’s feelings, the same that Alice is feeling. 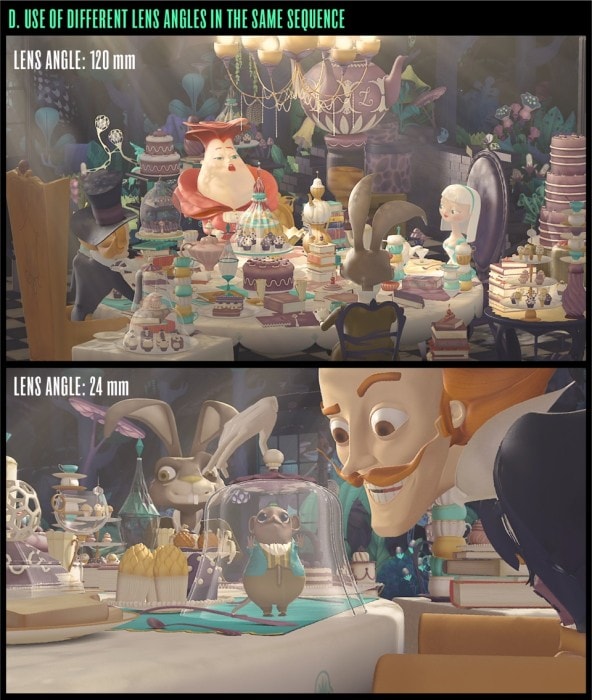 The characters of Lewis Carroll have been brought to life so many times. Was it difficult designing the characters for this short?

It was one of the big challenges! First at all, we wanted to respect the first characters from John Tenniel and the well-known character designs from the 1951 Disney film. 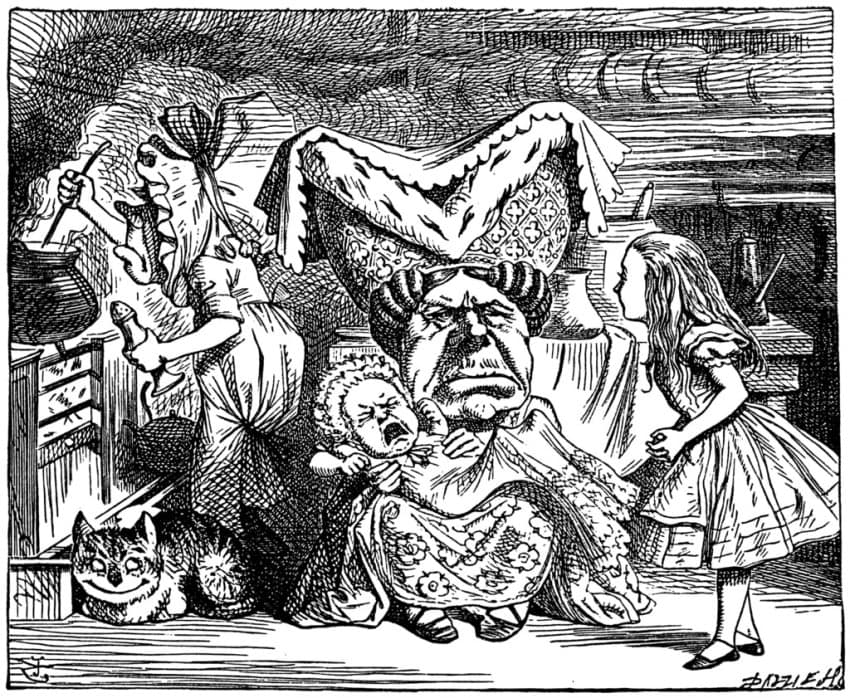 Our idea was to keep some details and aspects of each character with little twists to make them more contemporary and modern. For example, Alice is edgy, with tattoos and a kind of sensual dress. Actually we wanted to do more “Lolita,” but we couldn’t.

Besides the design, we changed the way that you perceive each character through their personalities. We created a crazy Hare that eats animals, a Rabbit who rides a monocycle and a fatty Rose who’s allergic to herself.

The most complex personality is the Mad Hatter. He is elegant, skinny, well-educated — but also with psychotic breakdowns. He couldn’t stop drinking tea and eating books!

I’d love a technical explanation of the Mad Hatter sequence at 2:14. How did you guys design and build that scene?

First, we animated to the Mad Hatter in 3D, because we have him rigged from the tea time 3D scenes. We also did a 3D particle simulation of the books (the ravens), and of course we animated the camera movements in 3D.

After this process, we drew up each frame with a 2D illustration style to integrate the Mad Hatter more into to the aesthetics of the world, where big eyes, books and 2D brushes live all together in a single scene.