In motion design, the relationship between image and sound can be incredibly tight, even reciprocal. Animation allows for audio to directly influence visuals — not just the other way around.

But in order to create something special, you need to understand how to collaborate. You need to know how to improvise within a constrained framework.

The typeface itself was created by Vucko and friend Roger Dario, then animated with the help of six Toronto-area animators. Vucko and Black crafted the showcase video via a game of audio-visual ping pong, riffing like jazz musicians on each’s work.

We asked them about their unusual workflow and the challenges they tackled as they improvised their way through this passion project.

I’ve been intrigued by Animography since it launched. The idea of animated typefaces was ruined for me by LiveType in Final Cut Pro. It seemed like an editor’s approach to animation. (No offense to editors.)

I think there are a number of different people who continue to find the value in Animography. There is always the scenario where you need high quality for a quick turnaround. (Custom animating 26-36 characters can be a big ask).

There is also a huge appeal for animators because sometimes you just want to dig into the project file and see how and why they did certain things. One of their previous typefaces, Franchise, is a great example for this.

Okay, so since the typeface came first, let’s start with that. Andrew, what were the inspirations you and Roger drew upon?

For both the typeface and promo, there were some huge influences — the work Paul Rand did for some IBM posters and Westinghouse, for example. There were a lot of cues also based on Swiss design and compositions from Saul Bass. One logo in particular that struck me was for Riri Zippers. 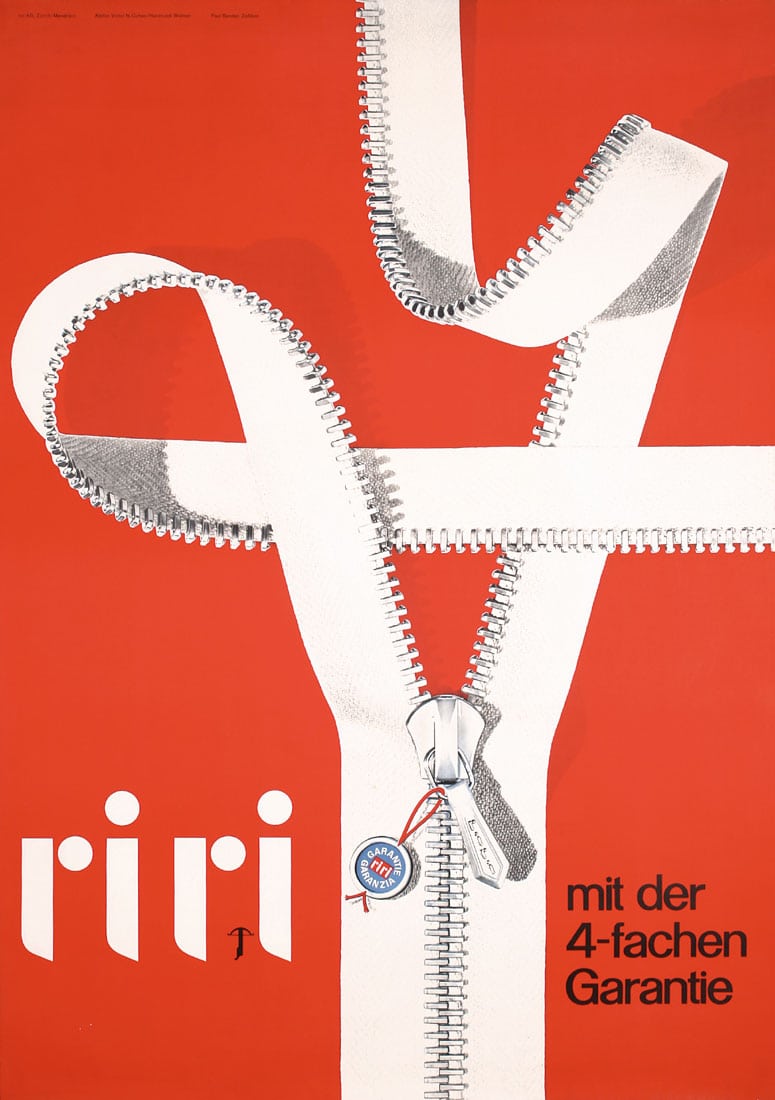 The initial concept was pretty different from what exists now. We explored a couple different paths until we found a framework that we liked. The first pass was a monospace  all capital font, which had a tiny bit of an art deco feel to it — but it felt a little too restrictive.

This ended up acting as a skeleton for what was initially a geometric variant. We then boiled it down to the most basic form while still keeping it legible as a display font.

It was always interesting how powerful simple geometric shapes could be, and how that reduction really lends itself to exploring a wider canvas of pattern and structure. We just moved forward with this single design.

Designing a typeface is a daunting task, no?

It is absolutely insane! I didn’t and still don’t consider myself a typographer by any stretch.

I think the initial thought was just, hey you know what, screw it —this could be fun, it just allows yourself to grow and respect the craft even more.

At what point did you start sharing the typeface with John?

It was almost immediately after each character was animated. We have worked on a bunch of projects together, and it’s always better starting the conversation early.

So often in picture, the visual tends to precede the audio — and you can’t fault that workflow when you deal with brands and commercial work. But in terms of artistry, it’s always a 50/50 collaboration.

John, what were your initial reactions upon seeing the typeface?

I really liked the graphic quality and modular possibilities of the forms. I could see the potential to really push this in a dynamic direction. We just needed to find the right concept/approach to get cooking with it.

The music has this delicious fat but clean sound to it. It sounds like you were working with some classic drum machines. Is that so?

Somewhere along the way, the idea came up to create the music first, or at least the tempo and rough structure, and then begin the back-and-forth refinement process.

I thought it would be limiting — in a good way — to create a piece of music out of only percussion elements. I did a few tests trying out different approaches, but nothing really clicked until I considered using just drum machines.

I thought it would be interesting to take these classic sounds and make an extended collage of styles and approaches. I don’t actually own a lot of hardware-based drum machines, but I did utilize samples from as many machines as I have in my library, which is a lot. 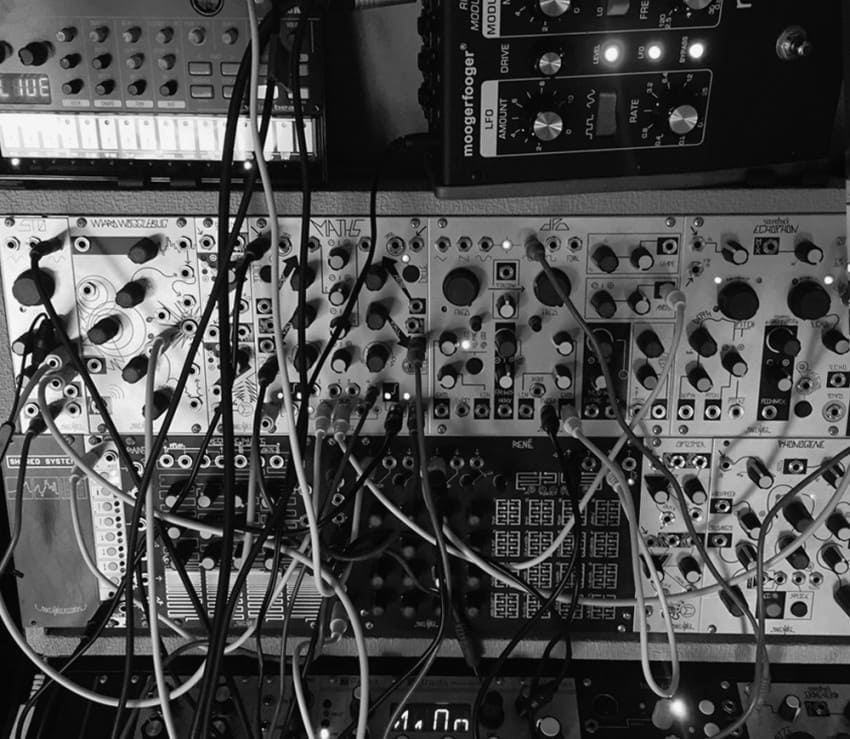 “I took the sounds out of the computer by using hardware step sequencers and also ran the outputs into my modular synths and outboard effects.”

I took the sounds out of the computer by using hardware step sequencers and also ran the outputs into my modular synths and outboard effects. I then recorded sections of improv jams to tape.  After some experiments, I started laying the different cycles into the timeline and sending them to Andrew.

I mainly tried to keep it flowing and rhythmically compelling to listen to — and to animate to as well. We decided on a couple of specific points that would happen along the way as well, like when the “D” explodes, and there’s a short ‘reverse’ part later on.

Basically, I wanted the effect of a mad room full of drum machines doing a call and response drum off!

Andrew, who were the animators you worked with and how did you find them?

We have all worked together in some capacity. I think it was kept local for a really simple reason: there is a tight community in Toronto for design and motion, and really the frequency we see each other and bring up “hey, let’s do a project together” — it really happens too much, in any city.

This was the perfect vehicle for everyone to find time to jump on board. It’s an easier ask when you say, “Can you animate 2-4 characters?”

Andrew We had the luxury of time, and we decided to pursue a different workflow — we would pass audio and visual back and forth every few days and just let the piece evolve naturally.

This progressed with a “Yes and..” ethos, where we were both constantly like, “Oh shit, this is interesting. I welcome what you did. Let’s just keep building on top of it.” It was just about moving forward and trust, you could only see seconds forward into the piece.

John Since Andrew was essentially animating the details to what I made, I just tried to move forward in time and keep it interesting. There were occasions when I needed to respond to timing issues for the animation, but it was all conformed to a solid tempo, so it was mainly creative math to make things flow nicely.

How easy/hard was it to keep the collaborative “jazz” going? Did you find it slipping away at times?

Andrew There was a lot of break time happening during the process. Sometimes there were moments that were like, “What in the hell is going on here?” and we would just step away for two weeks to a month to clear our thoughts.

John It was difficult to really know how it was all going to work along the way. I also had days where I thought that it was too much — or not enough! I am happy that we both decided to stick with the concept and push it as far as we did.

Andrew This probably is a super standard answer, but I am just always happy doing something from beginning to end, seeing anything finished. It’s not getting any easier — it’s actually ridiculously testing.

But I hate the idea of just trying to exist in a comfort zone, so to be able to have some faith to improvise and maaaaybe sometimes to have it work out, it’s enough!

John My favorite projects need to interest me in a challenging way or be a lot of fun. It’s really about just making the best work you possibly can and getting better in the process.

Collaborating with talented people is the best. It’s just impossible to get bored when you keep projects like this as a priority and make the stuff that you yourself want to see/hear.