After a successful run on the festival circuit, including a premiere at the 2015 Sundance Film Festival and a Special Jury Recognition award from the 2015 SXSW Film Festival, the provocative animated short “Teeth” is online.

Created by duo Holbrooks (Tom Brown and Daniel Gray) and featuring the voice acting talents of film and TV star Richard E. Grant, the film is a meditation on obsession — and the strange behaviors it can fuel.

We interviewed Tom and Daniel to learn more about the thinking behind the short.

From start to finish, my skin was crawling. So many — is “repulsive” the right word? — moments. Perfectly engineered uncomfortableness. Is that what you were going for?

Dan: We really wanted to make the audience squirm, to really effect them. We like the idea of a big group of people trapped in a room and conducted to the story in a very visceral way.

Tom: I’m not sure “repulsive” is the right word. A lot of people have expressed that it is very “visceral.”

I had some vague empty and pretentious concept of what visceral meant. But that is exactly right: It is relating to the deep inward feelings of things rather than to the intellect. 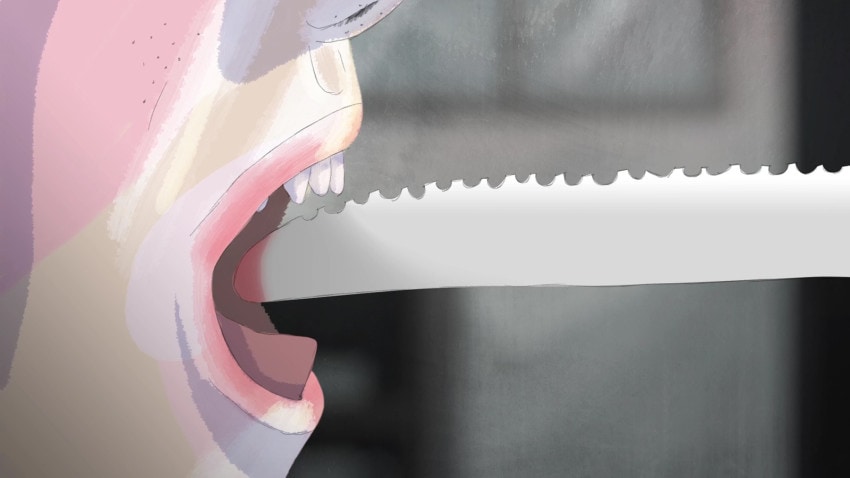 And that’s what we were going for,:we were’t looking to make people “feel something,” we wanted people to be squirming in their seats thinking about the cavity in their own tooth that they just remembered. Feeling the twinge of its nerve with every tap of a tooth.

We wanted people (by people I mean our Executive Producer at Blacklist, Andrew Linsk) to remember their doctor drilling their teeth as a child with no anesthetic, and run from the theatre holding their jaw.

You don’t strike me as a person obsessed with repulsion… are you?

Tom: I am not obsessed with repulsion. But I am an obsessive person.

For me, it was more about his obsession and his removal from the repulsion shown on screen. It’s about a man’s false belief system and how that could lead him to ignore the things that we were forcing the viewer to watch and be repulsed by, for the purpose of his ultimate goal, the dentures. The root of his obsession. 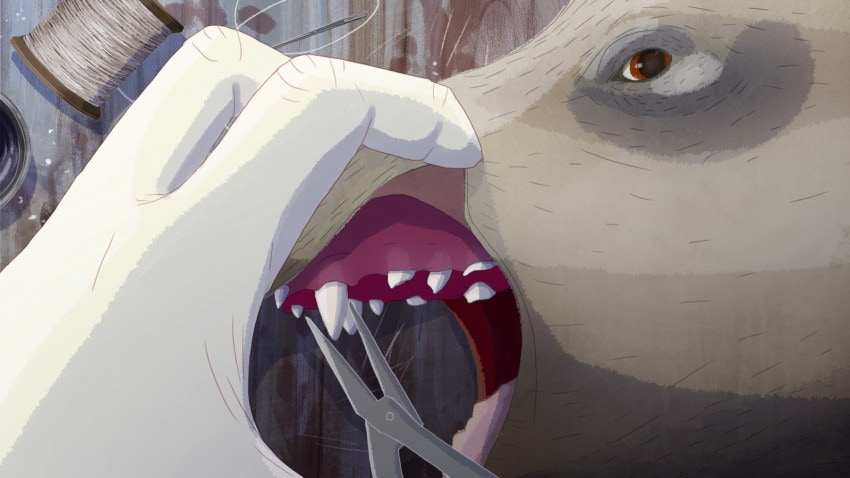 Dan: I think we’re more obsessed with being able to bring people right into the stories we’re telling, so not one specific emotion, but STRONG emotions.

Explain the writing process for us. How did it start and how did the writing evolve (if at all) during the project?

Dan: The writing tends to be a collection of ideas floating about, being slowly digested. Then, for no good reason in particular it’ll all get written out in one go. 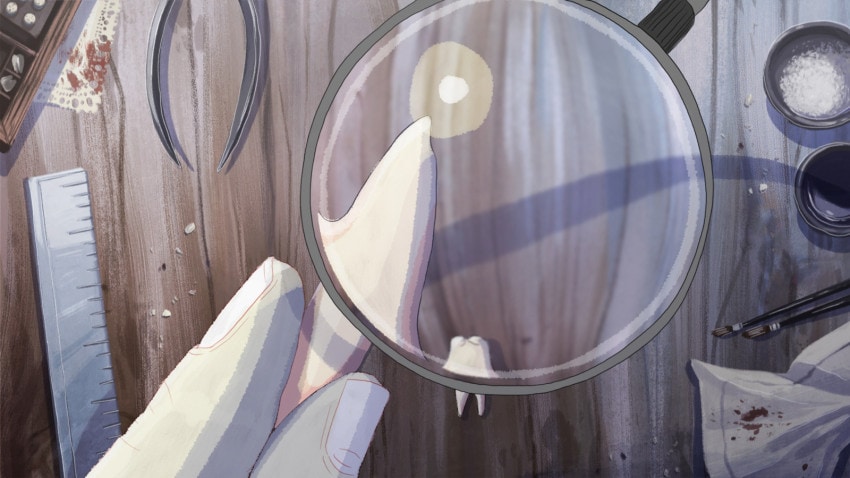 The next stage is then to adapt it to something that would work for animation. Obviously, a lot of stuff written won’t work as something seen. The rhythm and space given to description are completely different when you start to tell the story visually.

So we chop and clop and hack away at it, add a little bit here and there until we’re happy with it.

Tom: Well, there is a tale of how it started: We were on the train, the Eurostar, from Annecy Animation Festival 2007. The train hit some sort of bird, knocking out the power, and we were stuck there for hours, waiting for another train to come and pick us up.

Dan and I had been knocking about the idea of a pair of twins who only have one set of dentures between them. Each one passing the dentures back and forward for the other to use, and one of them kept breaking them and replacing teeth with things he found, like whistles and pencils.

And at some point, there was a bit about a homeless guy who was on his last pair of dentures, and was replacing broken teeth with odd items. And then we had a narrative about a guy not caring about his teeth, losing his teeth, becoming obsessed with teeth, and their function, and animals’ teeth, and dedicating his life to creating the most efficient set of dentures out of all species of animals. 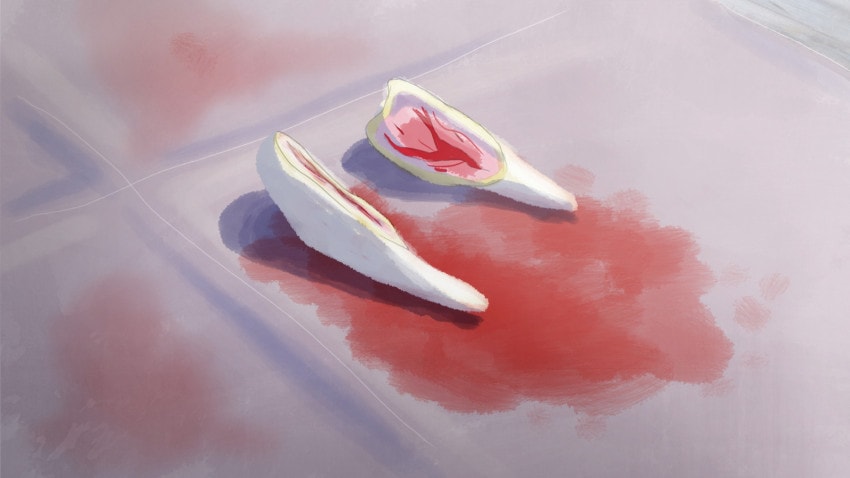 There was something about [former British Prime Minister Margaret] Thatcher destroying public services and only missing things when they are gone. But my Dad is a Torie, and he’d have been furious… and it was too long, “inefficient storytelling” as Dan will say.

How did you develop the visual style for this short? Any strong influences at work here?

Tom: We really wanted to build on the aesthetic we had created with our first film “t.o.m”, to try and build more of a visual language for ourselves as filmmakers.

So we took that as a starting block. In fact, I used the same photoshop brushes for the animation as we had in “t.o.m.” But instead of just one layer of a shadow and a highlight, we had multiple multiple layers building up the image.

Obviously, our commercial work has helped inform and improve our style, but we really wanted to pair back the tricks that we normally use to make animation easier, trying to keep it as authentically laborious as traditional animation is, while still a completely digital process.

Dan: There were lots of images of dentistry we collected, photos of nice objects what we though would be in the house.

My part was more in the storyboarding and shot composition; Tom did the design in this short. From my perspective, the shot composition was governed purely by the needs of the story: Claustrophobic, tense and focused.

Why do you never show the face of the narrator?

Dan: This was because the story is a recollection from the mind of someone who isn’t interested in faces or people for that matter.

Tom: Showing his face immediately would make the film less relatable for the viewer. By keeping the narrator ambiguous, it makes it easier for the audience to imagine themselves in his position and more empathetic, without projecting his feelings and thoughts onto the “other” of the character.

It’s about keeping the audience invested. We use a Trojan horse of a visually appeasing aesthetic and a slowly unsettling narrative to draw the viewer into the madness of his obsession.

Richard E. Grant nailed the narration. How did you get him and what was it like directing him?

Tom: Richard E. Grant is one of my all-time favorite actors. I live to be Withnail, and he was one of the first people we talked about on the “dream list” of people we would love to voice the film. 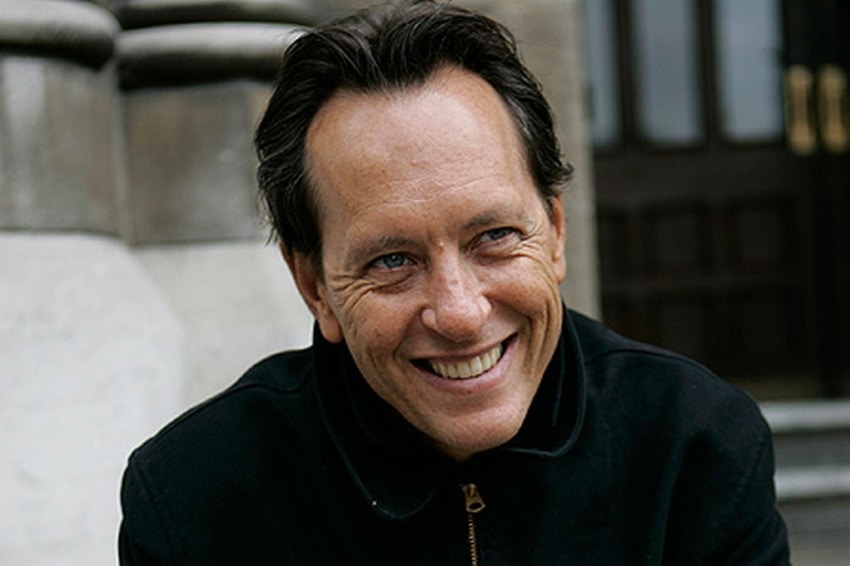 We thought it was a pipe dream. But some advice from my Mother here, “If you don’t ask, you don’t get.”

So we did, and he said he loved the project. As you might expect, he is an incredibly professional man. After three readings of the script, we knew we had everything we needed. But we had the room and him booked for three hours, so we asked him for one more take.

We were done in 45 minutes. I was terrified and ecstatic to give him direction, but he was super enthusiastic and responsive. We were very happy that day.

Dan: He was such a nice guy, you instantly wish that he was your dad. He was also the model professional, so it was really easy working with him. It was only before and after that the feeling of awe really his us.

It seems to me that the narrator is caught in a weird place between nature and artifice, pleasure and pain, sustenance and decay. Is that how you see it?

Dan: You could also say he’s caught between want and consequence, which is exactly where he is and what we wanted to show. So yes, you’re completely correct.

Tom: That is a crazy reading, and I love it. His god complex, mixing all the things nature has to offer and his frankensteining of it mixed with the weird masochistic joy in the decay and destruction of his own teeth.

The sound design from Antfood is intense. Talk about how you worked on that with them, please.

Tom: We approached Antfood about halfway into the film, when we had a full animatic and an idea of the style. We’d just worked on a commercial together and really wanted to work with them again on the film.

We wanted them to have total creative control over their work, to really go all out on whatever they wanted to do with just a few stipulations from us: We didn’t want any instrumental music, and we wanted to terrorize the audience. 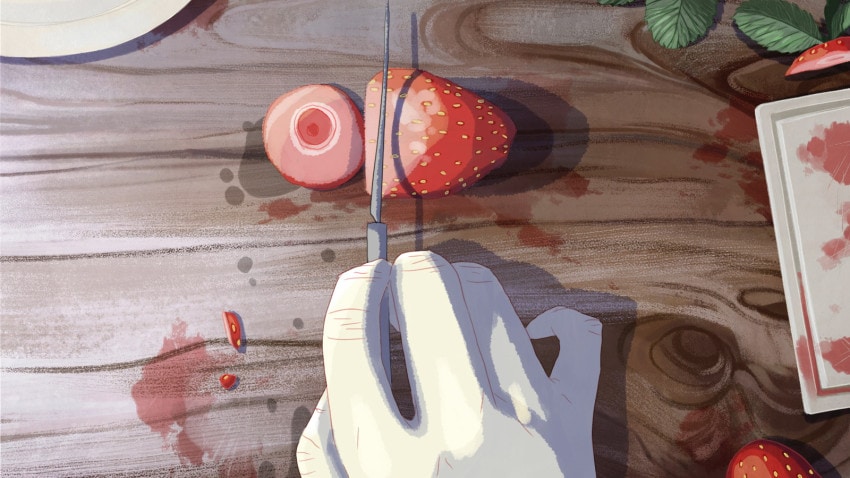 And of course Antfood were fantastic, they collected a bunch of teeth and tongues and squishy wet things and created amazing foley and a super creepy and disturbing sound bed and atmosphere.

The first time I watched the film with a work in progress from them was the first time I realized we were making a horror film. It really blew me away.

Dan: We’ve worked with Antfood many times and have an incredible amount of respect for their talents. We’re not afraid to trust other people to bring their skills to a project.

It was fantastic to get a soundtrack from them and watch the film, like seeing it for the first time. All the months of staring at frames and only being able to see lines and dots moving about were replaced with a film that worked, and worked how we wanted it to. I can’t sing their praises enough. 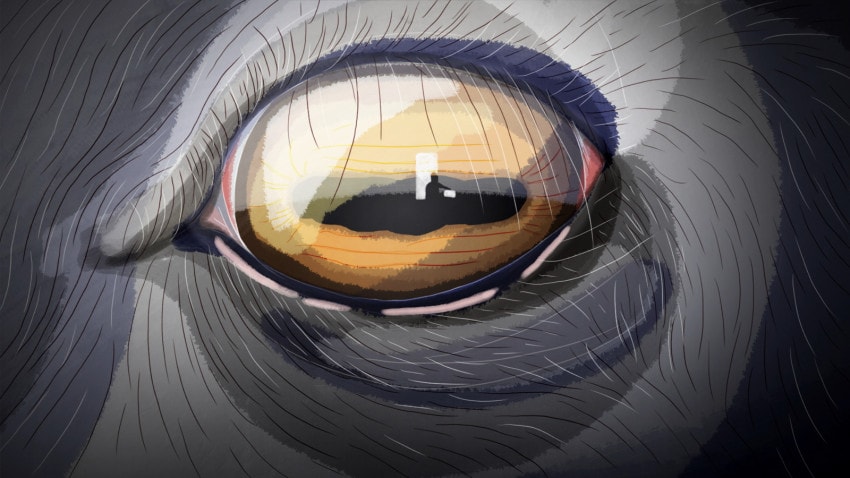 The shot of the silhouette reflected in a dead animal eye had a very cinematographic quality to it — were you consciously channeling filmic storytelling at all?

Tom: Cinematic, unconventional — we wanted to show the audience more than what the narration was saying. Hinting at his thoughts and feelings, trying to get a sense of his internal self, from his environment, his perspective on the world.

Have you considered making a physical reproduction of the final set of teeth? It’d make an amazing promotional gift. For me. Please.

Tom: Right at the beginning I started talking to a student dentist about it. I was trying to get a sense of all the perfect species for each tooth and thought it would be great for reference.

But really it’s a pretty disgusting thing to do.

Dan: We thought about doing it in VR once.