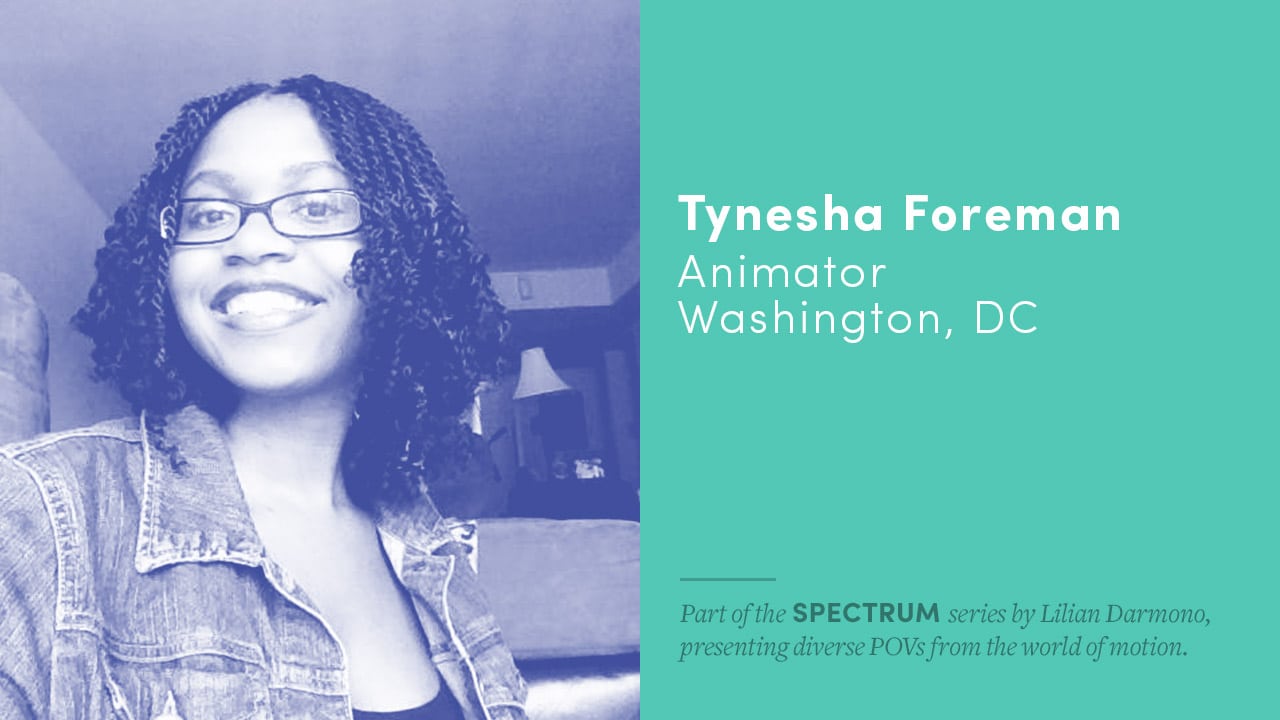 SPECTRUM is an interview series by Lilian Darmono with members of the motion design and animation communities who have interesting and unusual perspective to offer.

For our inaugural issue of Spectrum, I talked to Tynesha Foreman, a a 23-year old graduate from the MICA Animation program, who’s currently a motion designer with The Atlantic, having completed an internship with Slanted Studios of New York.

I (Lilian) am a colored woman from a lower socio economic upbringing. This makes me a minority, not only thanks to my gender and race, but also because my chosen career in motion design comes with substantial financial cost right from the start. Last I checked, even the most basic equipment and software can set you back by at least a couple of thousand US dollars.

Barriers to entry like this mean when I scan the scene looking for people I can really relate to, more often than not I come up empty-handed.

So I won’t lie – I was quite excited to speak with someone like Tynesha, because of the number of things we both have in common. And I discovered, to my delight, that there are a lot of things I can learn from someone like her.

There are not many black female animators/designers out there. On this note, Tynesha observed:

I don’t believe there’s a direct influence from my race/gender on the style of my work, though it leaks into its content from time to time.

However, I think that my gender may have played a part in the absurd and often grotesque nature of my work. Primarily the “a girl doesn’t usually do that sort of thing” aspect. When hearing these things throughout my developmental years, I always wondered why and then challenged that statement by making more strange things.

Born and raised in Virginia by a predominantly matriarchal extended family, Tynesha also comes from a modest financial background. They grew up in a neighborhood where they had to “learn the distinction between firecrackers and gunshots.”

Because of her limited means, they’ve had to hunt for scholarships opportunities constantly. They explain:

“When I was in school, I felt like [taking a] break was working constantly, and work was when you would go home on vacation and have to work at the loan stuff and keeping up with scholarships.”

Even those who were there to help sometimes could say damaging things. Tynesha related how her confidence took a hit when her counsellor advised her to aim for community college, because even with the grants, they weren’t going to able to afford the education they wanted. So they looked for whoever would give her the most scholarship money, and went with them.

When they finally made it to college, they marvelled at how easy it was for friends to “just pay for things out of their own pocket”  while attending a school that costs roughly a couple of hundreds of thousands of dollars. 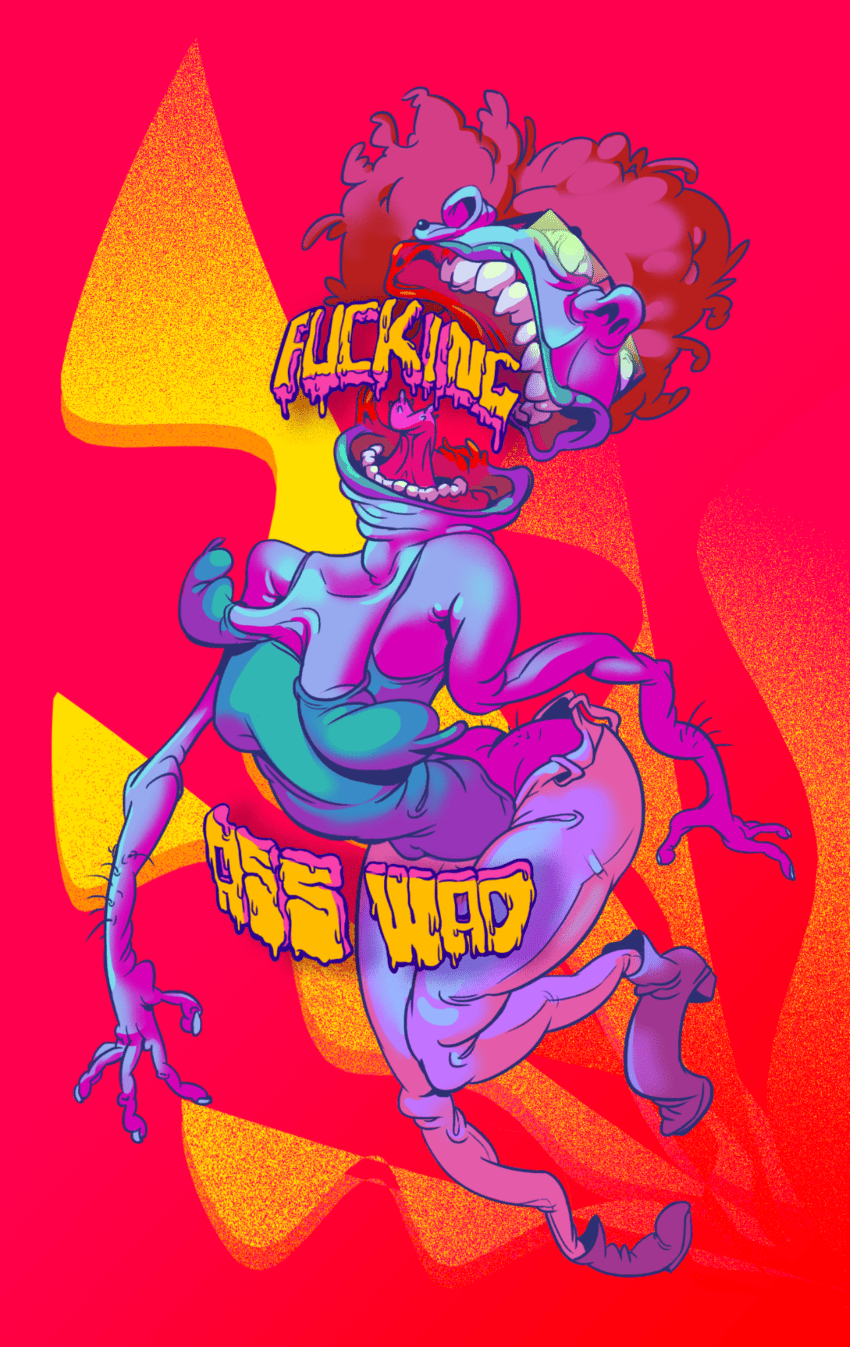 Tynesha’s Self Portrait : “…my gender may have played a part in the absurd and often grotesque nature of my work. Primarily the ‘a girl doesn’t usually do that sort of thing’ aspect.”

So her path so far hasn’t been a stroll in the park. I can relate to that. However, the biggest inspiration for me was finding out how much better Tynesha handled it all.

On beginnings and backgrounds

For starters, take the scenario of having to compete with peers who have more of a “leg up” into the industry, either because their parents were already creative professionals or the family just had more money. I remembered being intimidated, but Tynesha’s attitude was quite the opposite:

At first it was insecurity, and then it turned into insight. Everybody has a different start, it doesn’t matter. I guess it was because I still felt I could hold my own with those folks.

I definitely was more inexperienced in other areas where they weren’t, but I still could hold my own with what I thought I was lacking. I still could learn. I still could do research. Even though I might not be as instinctual, [I could] still be part of that community without feeling like I have something less.

And what about now that they’re out of the university bubble, getting exposed to the big, bad cruel world, filled with tales of design superstardom? Surely the stories of those who have come from better circumstances would stand out more to people like us?

Again they proved me wrong. They described her observation of the scene as “comforting”:

“I’m seeing a lot of really cool humble beginnings. People are like, ‘I didn’t know how to do this, I just grabbed this, and this is what [I’ve done] for a long time.’ It’s really uplifting.”

We also discussed the undeniable power of having a role model that comes from our demographic. In her case, this took the form of Sidney Clifton, a recruiter from Bento Box Animation Studio who came to speak at her college. 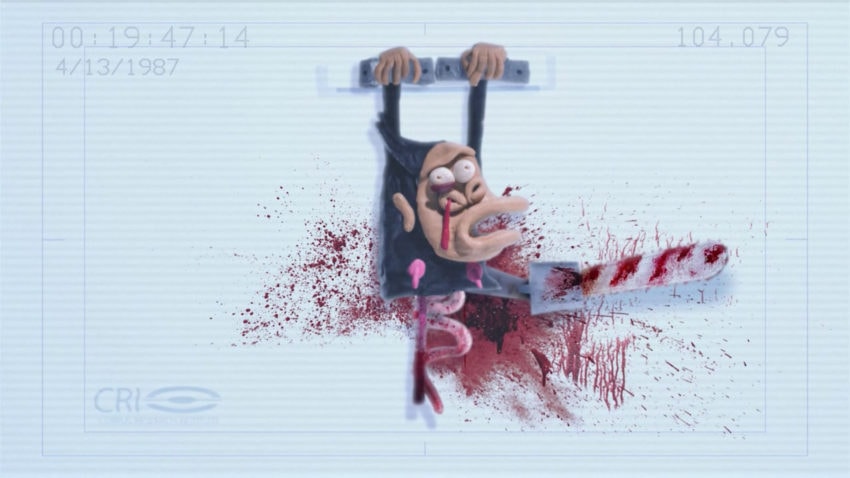 They described the “lightning bolt” moment of seeing a strong, successful, career-driven black woman stand up in front of an audience. “It made it real for me,” they recalled. It turned what was merely a dream into something tangible. (I could only imagine how much more magnified this impact would have been if Sidney had been an animator, like Tynesha).

On success (and how to achieve it)

Her definition of success?

“For me, it’s doing what I like to do, feeling like the learning never stops, that I’m in an environment that I can grow. I can pay my bills, and I can push myself creatively or experience new things in the world of animation. That’s when I feel successful.”

What’s her advice on how to get there?

“If you like to do it, find anyway to be involved. No matter what someone thinks you are, make it so they can’t ignore your work.”

Thinking back to her school days, they said, “It was here in which I truly saw that my specific demographic (black female) would play a part in my odds of getting a higher education. I knew that no matter what school I got into, I’d make the system behind it realize that potential has no specific demographic.”

Giving someone a chance can mean more than you think.

But they also caution young people to strike a balance. They understand the urge for young people to make an impression early in their career: “Sometimes overachieving does get you that bump up,” they said. But at the same time, they think it’s important to “be healthy, and value yourself so they will value your work.”

As for the rest of us who are in positions of power as far as recruiting is concerned, be it at a workplace or schools, her message is simple:

“Giving someone a chance can mean more than you think. We’re never sure what someone’s experiences were and how their identity affects that, but a chance means a lot.”

Special thanks to Ave Carillo for her editorial assistance.