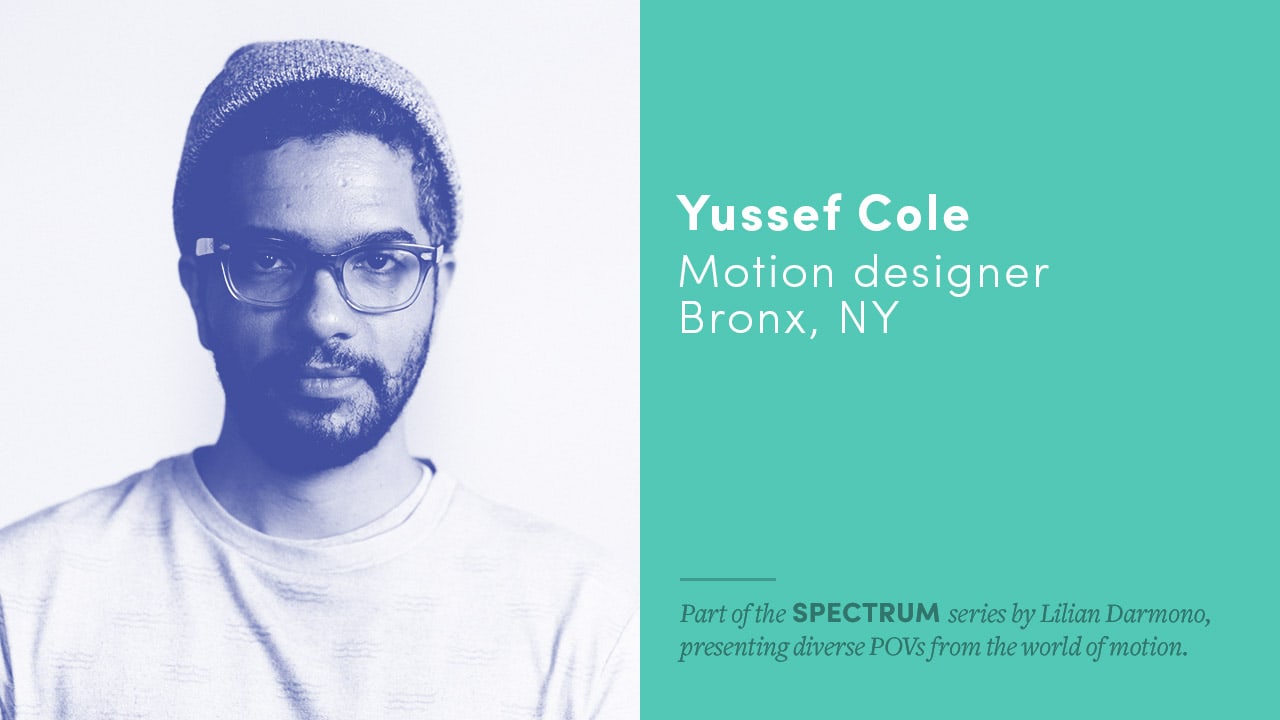 Guest name: Yussef Cole
Describes himself as:  A New Yorker, a nerd who loves video games, sci-fi, literature and film. Have worked in motion for 10 years and love making vibrant art come to life on screen. I will always have a cat (or two) in my life.
Born/raised: Bronx, NY, USA
Current Location: Bronx, NY, USA
Age: 30-something

For this issue, I spoke to Yussef Cole, a motion designer based in New York.

Yussef is one of those eloquent people interested and capable of discussing things above and beyond “shop talk:” culture, politics, art, films, and one my favourite subjects: the social impact of what we do as motion designers.

Quite a change from the majority of the crowd in this industry – whom I find to be neither interested nor critical enough to question and challenge the way the world around them works, despite sensing that things aren’t quite right.

I dug deeper, curious as to how Yussef becomes the person that he is now today. Creative yet political, with no shortage of insight into things.

Born of two cultures, neither one home

Yussef is of mixed parentage: half Arabic, half African-American. Always juggling two cultures, never feeling that he completely belonged in either one, he has honed a certain survival skill that grows out of being empathetic to those who don’t look or talk like him.

His first exposure to commercial art came through the large-scale printed ads that his dad would bring home from the print shop he worked at, and Yussef would hang some of these on the walls of his room.

Yussef identifies with growing up with “limited means,” although he never felt stifled in pursuing a creative career, thanks to supportive parents that didn’t try to steer him to land a money-making job. Eventually, he won a scholarship to a private school with an excellent arts program, where he got to develop his drawing and storytelling skills by contributing to the school’s comics and poetry zines. 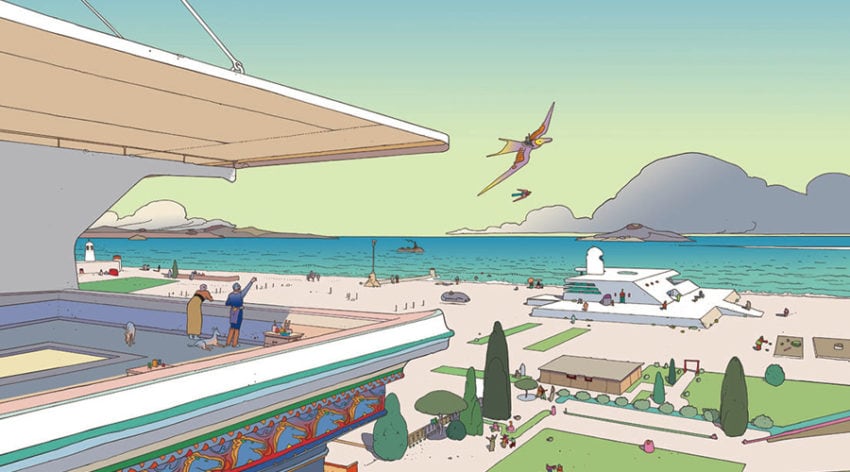 Illustration from Jean Giraud Moebius, an early influence on Yussef

At this stage, Yussef was increasingly drawn to sci-fi and video games aesthetics. Moebius is a particular inspiration to him, due to his ability to depict futuristic and fantastical locations that feel ‘“lived in,” that despite their strangeness.

Eventually, Yussef ended up studying film at Oberlin college. After graduating, he wanted to get into editing and film production. He moved to San Francisco to pursue these opportunities, but discovered that was not doable, as most positions required unpaid internships.

Yussef stumbled into motion graphics instead, as he needed to make money. He discovered a demand for motion artists, which was a still a very niche skill back then. He taught himself the software to take up those jobs, moved back to New York and ended up freelancing for studios like Hornet, Psyop, Shilo and a few others in and around town.

I asked Yussef about the thing that I noticed first about him: his critical thinking and analytical ability, How did he develop this, and has this set him apart and given him an advantage in his current career?

He told me at Oberlin, he had to watch a lot of films and write essays about them. “You get really practiced in expressing an idea clearly, and succinctly, which is good,” he said.

As he tried to get more directorial gigs, he explained how being able to sell an idea to the client is just as important as coming up with them in the first place, and his critical thinking and writing background helped him in that aspect.

“You might be good at drawing or having a solid style that you’ve developed over time, but it might hold you back if you can’t sell it to a client. You’ll never get off the ground.”

Lessons from an awkward interview

The ambition to be a director didn’t come right away. He explained:

From my very beginnings in the industry, directors tended overwhelmingly to be white men. This had an impact on how I saw the position, and on how feasible it seemed. Of course, now it seems perfectly attainable, now that I’ve been in the industry for over 10 years.

But who knows how things would have turned out had I seen more people like me in leadership positions earlier on in my career!

When an industry is not diverse enough, power tend to rests in the dominant group, Yussef explained.

He recounted a personal story of being interviewed for an unpaid editorial internship. The interviewer, a white male, brought up the fact that he happened to know the bartender who once confiscated Yussef’s fake ID a while ago.

Not being familiar with the racial dynamics concerning black men in America, I asked what’s particularly troubling about that incident.

“Black people are disqualified from work due to felonies all the time. I wasn’t actually in trouble, but it was a very uncomfortable power dynamic.” Yussef explained.

The interview ended up on a positive, friendly note, despite the awkwardness, but Yussef felt it was important to point out that those who have more power in society or workplace sometimes should be more sensitive about making jokes about those who have less, be it across race or gender lines. It’s a certain form of micro-aggression that makes those who are in the minority feels less welcome.

On trends and experimentation

We moved on to the subject of trends, and their role in commercial art. The industry is full of them, and they are doubtless useful, but what about experimentation, which can lead to the discovery of fresher and more unique trends?

“People need to sell their products, and when you have a shorthand, which is what a trend is, as a tried and true method, you can iterate and develop other things. [But] I also think there should be space for experimentation, stretching boundaries in terms of what style are there that people can embrace.”

In today’s social-media-dominated world, Yussef also warns how getting likes and followers can affect your self-worth as an artist and detract you from pursuing experimental work that may not get as much approval from the crowd.

“I feel like a lot of the time, a lot of people are afraid to experiment with style. I’ve always felt that pressure, where it’s easier… to stick to the trend and copy the leading style than it is to try something that’s out of left field, because it might flop.”

On the subject of experimentation, Yussef’s career has been filled with a lot of it – not just stylistically but also incursions into different sub-areas of motion design. Interestingly, he prefers not to be at the “apex” of any particular area.

On the “specter” of mastery

I don’t want to see if I can become the best at something, because I get very disappointed if I can’t immediately become the top of the game.

Maybe it’s a good defense mechanism, where I can leap into different careers and modes of working, so I always have the excuse that I’m starting out to feel like I’m not failing at it.

Yussef chose the word “specter” to describe the representation of being ‘the best’ – that double-edged sword which every creative has come to know as “awards”. Awards represent validation – the need for which is something that every artist can identify with, regardless of their strategy dealing with it.

Yussef describes how this takes different forms for different people. Maybe it’s about being featured on a prestigious blog or journal, being invited to speak at conferences, or being the creative lead on a prestigious project that will get a ton of likes and attention on social media.

For him personally, it’s the approval and support from his respected colleagues and friends. But he warns about the harm of applying one yardstick to everyone: “I think there are [different] measures that you can use to validate where you are, but  it also might not be true for everyone, or not everyone feels that way.”

Wrapping up the interview, I asked him what’s something he’s noticed as a minority that the mainstream world may not realize.

Something that’s been a rising issue for me is the unquestioned assumption that a meritocracy exists. That the best people will rise to the top, due solely to their skill. It doesn’t work this way.

I didn’t even know motion graphics was a job until I had finished school. I didn’t think of art school as a valid option being a child of immigrant parents growing up in the city. And yet I still made it, but how many people run up against this wall and don’t squeeze through?

The people we see as “rockstars” and “cream of the crop” also happen to be the people who discovered the right opportunities, whether it was through unpaid internships they could afford (thanks to parental help) or studio cultures already dominated by straight white men that they could automatically feel included in.

These factors shouldn’t be ignored when we’re talking about who deserves to make it.

Parting advice: find your own voice

As for advice to aspiring motion designers, Yussef had this to offer:

It’s important to try a lot of things, a lot of styles, a lot of types of media (not just digital), and not just try to model your work after trends.

While it’s important to form a strong foundation in terms of skill and ability, trying to match the masters is a losing game. Better to strike out and find your own voice. Find what makes you special, what makes you happy. Often, those two will be the same thing.