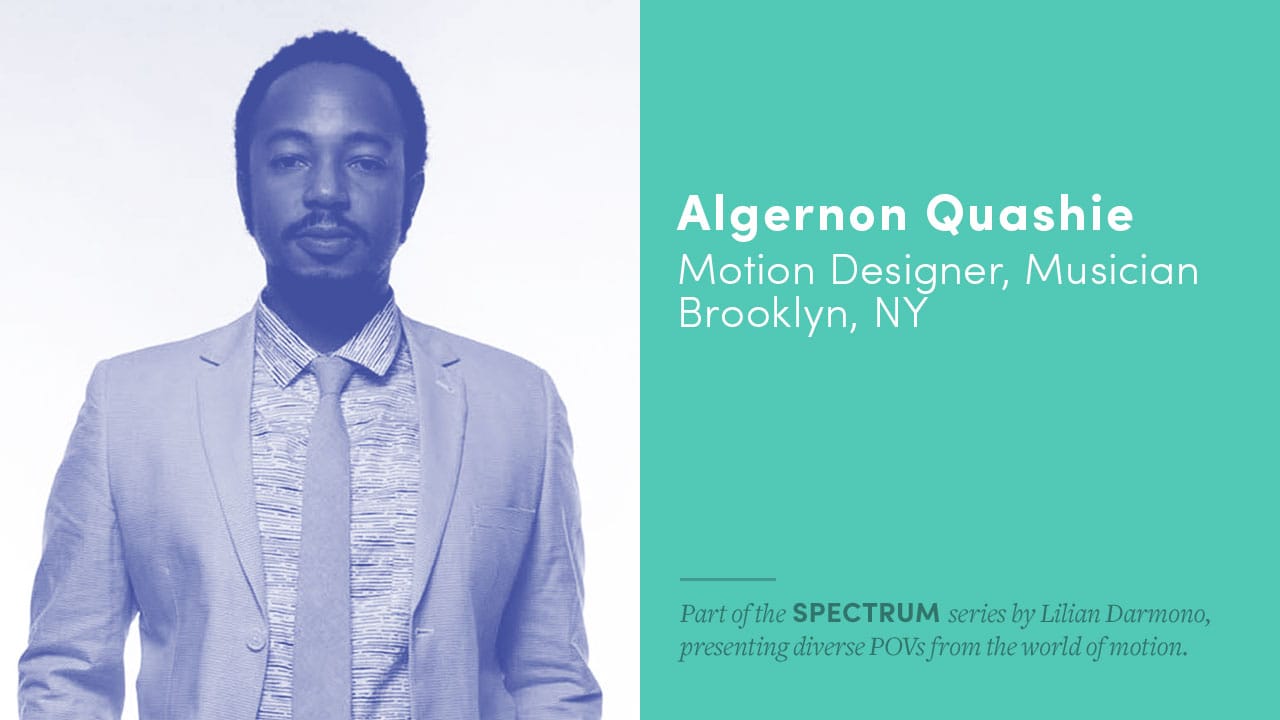 This issue of Spectrum, I spoke to Algernon Quashie, a Trinidad/Tobago-born, American motion designer, musician and artist.

Algernon started his career as a musician before discovering the world of motion design by accident while he was on tour. The long hours spent traveling and waiting to perform as guitarist of Miniature Tigers left him wanting to fill the boredom with something fun and creative. He began making tour videos using iMovie, then graduated to Apple Motion, which allowed him to do more with the typographic animation for the videos’ titles.

Then a more “visually oriented” friend mentioned After Effects. (“It’s just like Apple Motion, but better!”) He hasn’t looked back since. Each night, the time he spent toying with the software grew, and a year later, he decided to take on Cinema 4D. 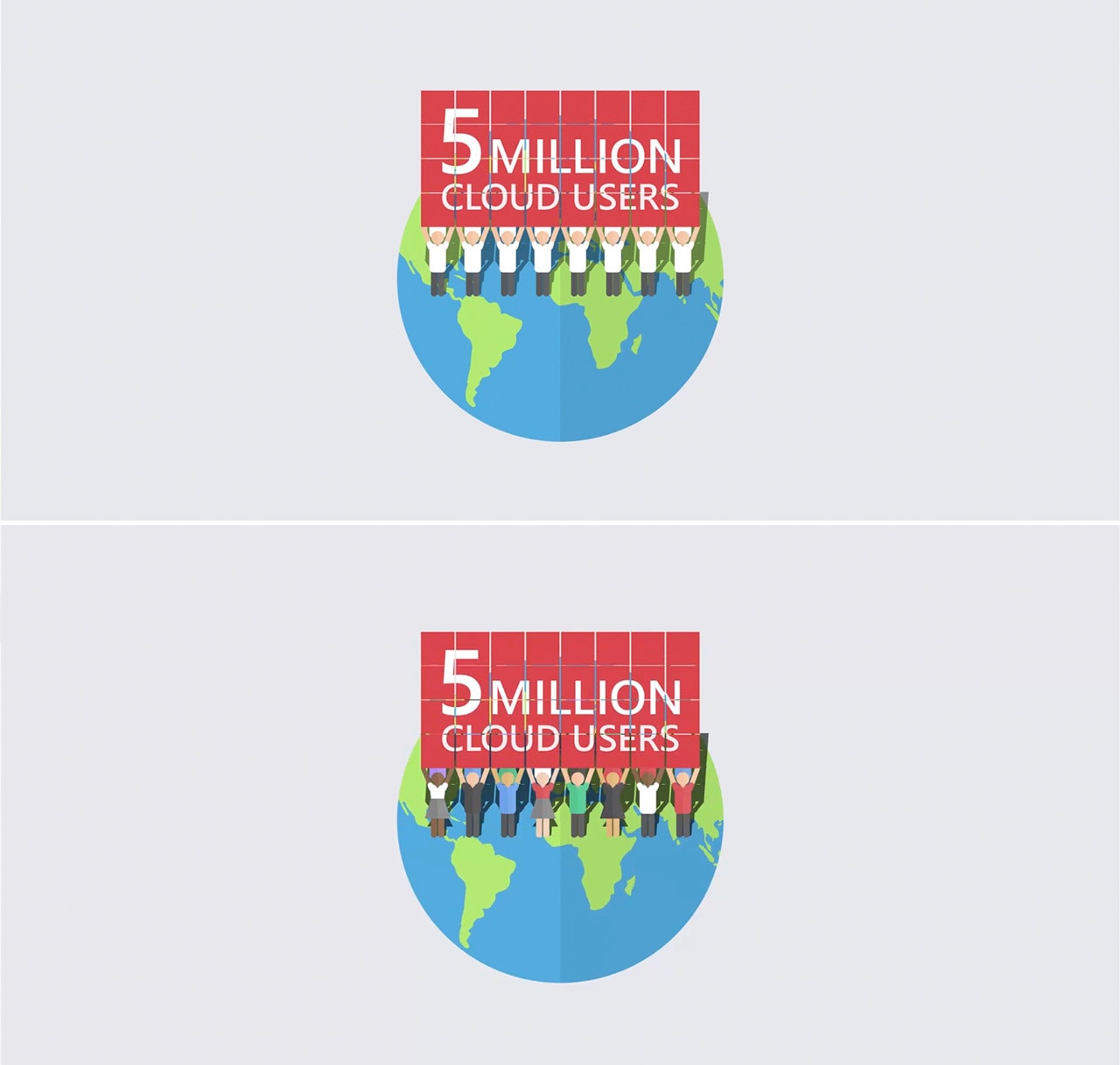 Before and after: Algernon’s choice of diversifying characters in explainer videos

Algernon explained that he’s been juggling an interest in computing and gaming — along with music and art — since he was young. In fact, his first foray into higher education was at Rochester Institute of Technology. He felt stifled after a year there, but he retained much of the focus and technical angles of problem solving, which is an undeniable advantage in motion design.

After a few years of intensive touring with the band, he returned home, having decided to pursue a career in motion design. By then, he’d accumulated enough skills through self-learning that he was able to apply for jobs, eventually ending up as an in-house motion designer at a large software company in New York making explainer videos and recording video interviews.

Starting out simply wanting to do a good job, he never questioned the actual content he’d been creating — and all its implications — until more recently.

A realization, then a series of changes

“Many times, I’m making all these characters,” he said, “and they’re all little white dudes!”

With increasing chatter in social media about diversity, he realized: “I don’t have to keep all these things to myself. I could talk about it more openly.”

Going one step further, he decided to bring some of this awareness into his work. When a script lands on his desk that calls for character designs that are all male, he requests to insert at least one or two female characters into the mix.

The first time this happened, his supervisor wanted to clear it with upper management, but subsequently Algernon said no one really took an issue with it as long as the end results look good. This was really satisfying to Algernon, as it’s one of his main goals — to make content that connects with people.

“I just want to do what I want to do, try to influence [the outcome] a bit more and make it better. There are other people out there watching this stuff, and this kind of thing gets implanted in their mind whether they think about it or not. And everyone is different, so we have to reflect that, too.”

This made me think of how so many things are ‘invisible’ — and would remain the same — until someone who notices them decides to actively change status quo for the better. I asked Algernon whether he thinks he noticed the character designs needed to be more diverse because he himself is not part of the mainstream, that he’s a person of color.

“Yeah, definitely,” he said. “I don’t know what it is, but maybe it’s just the thing about white privilege — where you’re just not looking out. You are just looking at where you are and who’s in front of you and being the part of the race that’s in power, you just think that this is the majority, this is how it’s going to be and that’s fine. Also, in relation to trends, people (regardless of color or gender) will just keep doing it and doing it, over and over, until something changes, you know?” 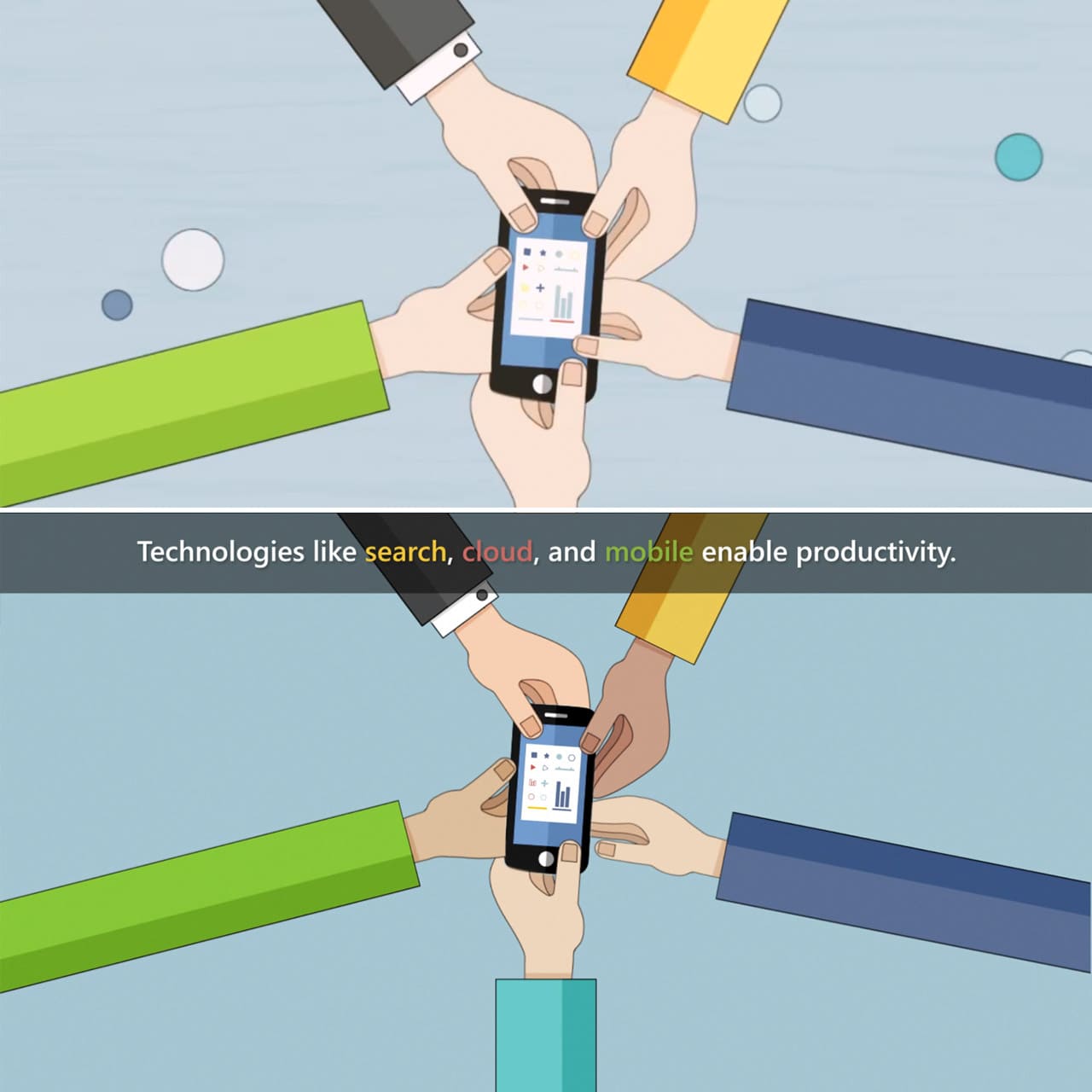 Before and after: Algernon’s choice of diversifying characters in explainer videos

I asked him if the lack of role models in his demographic has affected the way he views his career prospects. He said yes, somewhat.

In his search for inspiration and connection, he often looks at top studios, places he would want to work and at conferences, but “it’s pretty much 95% white males. And there’s not one person of color. So I wonder, ’Can I get a job there?’ Or ‘Would I be able to work on projects like theirs?’”

“Although you know there’s people of color out there, making it work in motion design,” he said, “you definitely don’t see as many of them as you do white males, and that makes it harder.”

And what about the meritocracy mantra that’s quite deeply ingrained in American professional culture — that you can make any dream a reality as long as you work hard enough? How does this balance with his experience?

“I feel that the [meritocracy principle] is true, but the thing they don’t tell you is it’s only designed to work with one type of people. If you’re not in that bracket, you have to work ten times harder – then possibly you might have a chance.

This is changing, but very slowly. I definitely feel it’s harder for me to work at businesses [that are less diverse] or do more creative things that they’re doing, but it’s not impossible, I just have to work harder at it.”

I asked if he tried talk to people about these issues? At this, Algernon chuckled, saying that he’s given up on that.

He says, regardless of how you feel, “it’s really hard to try and convince someone of something else, other than what they’ve already believed their entire lives. The problem is that it’s unconscious. You do have these negative biases in your head that you’re not even thinking about.”

He gave the example of hiring practices, where no one would be outwardly or consciously thinking that they’re not going to hire a person of a minority gender or race, yet it happens because these things are “like a reflex. You think, ‘Oh, I’m gonna go with this person because of some unexplained reasons.’”

Asked what he thinks would improve matters, Algernon thinks it’s more the business side of things that need to step up and be proactive about it. He explains that it’s the nature of businesses to be risk-averse, as their main concern is profit. So they tend to stick to trends and to what’s already been proven to sell.

“But if we can get them to be more accepting, more open and more diverse in content, then yes,” he said, “I believe it will help bring about some sort of change.”

We went on to discussing how his extensive professional music background has given him a different approach into his motion career. Apart from putting music and sound as higher priorities than many other motion designers, Algernon also said that he often works like traditional animators, tapping out the beats of a walk cycle, especially in personal projects where deadlines aren’t as tight as they are at work.

Other things that he’s gained from being a touring musician are the confidence and ability to talk to people from all kinds of backgrounds.

“I used to be really shy,” he laughed. Now he can approach people at events, strike up a conversation, working towards building his network, looking for collaborative opportunities.

Seeing the world, dreaming of the future

Algernon went on to describe how his exposure to the world is also a source of inspiration. It’s about ‘not just learning everything through the internet, but instead going out there and experiencing life.” From observing different people, different landscapes in nature, or even the different quality of light in the sky in various countries.

What about his future ambitions? More than anything, Algernon wants to form a collective someday with like-minded people, with no specific target in mind, just seeing what they would come up with creatively as a group, in an organic rather than overly planned process. He credits organizations like School of Motion as an excellent avenue to help him connect with others.

He links this thinking back to his days at Purchase College, where he studied music production, after switching from the intensely technical environment of Rochester institute of Technology. He loved the free-flowing creative energy at Purchase, where everyone was into something different creatively, and he would collaborate with other departments, creating music for dance performances or video installations.

In closing, I asked him about what advice would he give to others who are starting out. He said looking back, although he got into the game late, he still wouldn’t change anything, that every single experience has led him to where he is now.

So he thinks people should “keep learning, go out into the world and be open to things that come your way. Try not to dismiss anything, you never know what’s going to come back in your life at some point and effect you somehow!”