Just in time for the entry deadline of March 1st, the following guest post from Sissy Emmons Hobizal of First Mates reveals the process behind branding The Motion Awards by Motionographer. First Mate’s goal: build an ego-destroying design machine to do the work for them.

When Justin first asked us if we’d be interested in branding The Motion Awards (originally called The Motionogapher Awards) there was a ZERO percent chance we wouldn’t accept the job.

In addition to a cool brief for one of the all-time best clients, we were excited about the very idea of what Justin and Carlos wanted to do: fill the motion-graphics-shaped void between the crowded constellations of design and animation awards.

It was only as the adrenaline and excitement of starting began to wane that the realization set in that we were designing for fellow designers. As if willing yourself through the brick wall of self-doubt wasn’t already hard enough, the added perceived pressure of — let’s call it “peer-review” — added a neat layer of angst and worry that we were going to need to design something cool.

Very few phrases can make me angry more quickly than being told to “just make something cool,” especially when I’m the one doing the telling. I don’t know what “cool” means—it’s too subjective and shallow.

My passion is design that is built through meaning and metaphor, where a core concept and a nuanced understanding of the subject can inspire the work in a way you couldn’t have just aped otherwise. I believe this with an earnestness and intensity that is at times quite annoying to others. I can’t just do, I must believe it’s right. And the one thing I do know about “cool” is that it is the opposite of earnest.

Thankfully, re: all-time best clients, we weren’t being asked to design something cool, but still we had to battle that fear in ourselves. A battle we waged by being just that much more rigorous with our process and staying true to our core philosophy of design.

Fight the fear, trust in the process

That philosophy can be pretty well summed up in a quote that stuck with me from undergrad. While futilely attempting to define design, an assignment given – I realize in retrospect – to bring us to terms with that very futility, my professor suggested his theory that “design is the machine that makes the work.” It was catchy, succinct… and I wasn’t quite sure I actually understood what he meant.

It’s similar to the classic “design is a process,” but the beauty of the “machine” metaphor is that it’s something you can build outside of yourself that does the processing for you. It takes you out of your own head, sidesteps (many of) the trappings of ego, and facilitates perspective.

Built of relatively objective things: constraints, research, strategy, concepts and principles; the machine is then powered by the subjective energy of creativity and intuition. The more time you invest in building and fine-tuning your machine at the outset, the more elegant and specialized the output will be when you start feeding the work through. And the fewer questions are left without a clear and thoughtful path to an answer.

This was our first line of defense against the fear.

We started with the objective: gather as much information as possible to gain a nuanced understanding of what The Motion Awards would stand for and how they would be different from the myriad awards already out there. After multiple conversations and a deep dive into the world of creative awards it became clear that despite many attempts, nobody seemed to be getting motion quite right.

In the existing award field, motion design was merely a category or sub-category within a loftier designation, and the designs of the awards themselves ran the gamut from serious and respectable (if a bit boring) to full-on head scratchers. 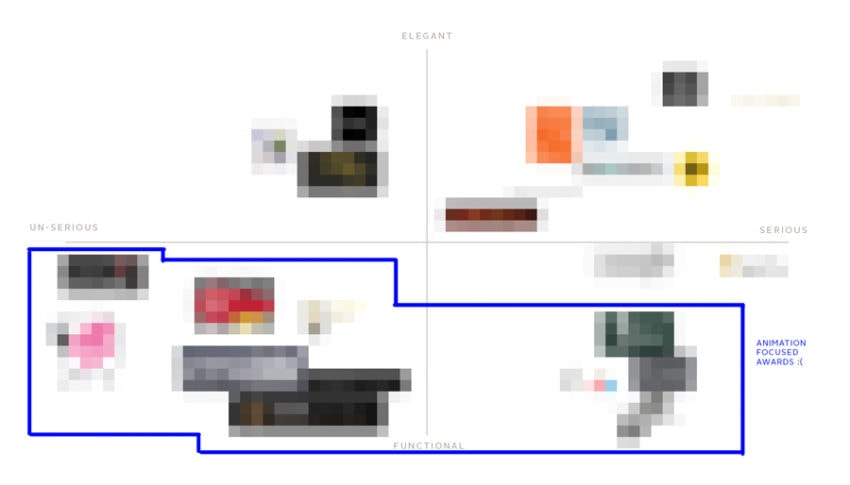 Across the board, few awards were both serious and elegant, and none gave motion graphics the level of consideration befitting such a rich and robust discipline.

This unique opportunity coupled with the values of Motionographer led us to develop three core principles and a visual territory that would drive our machine. 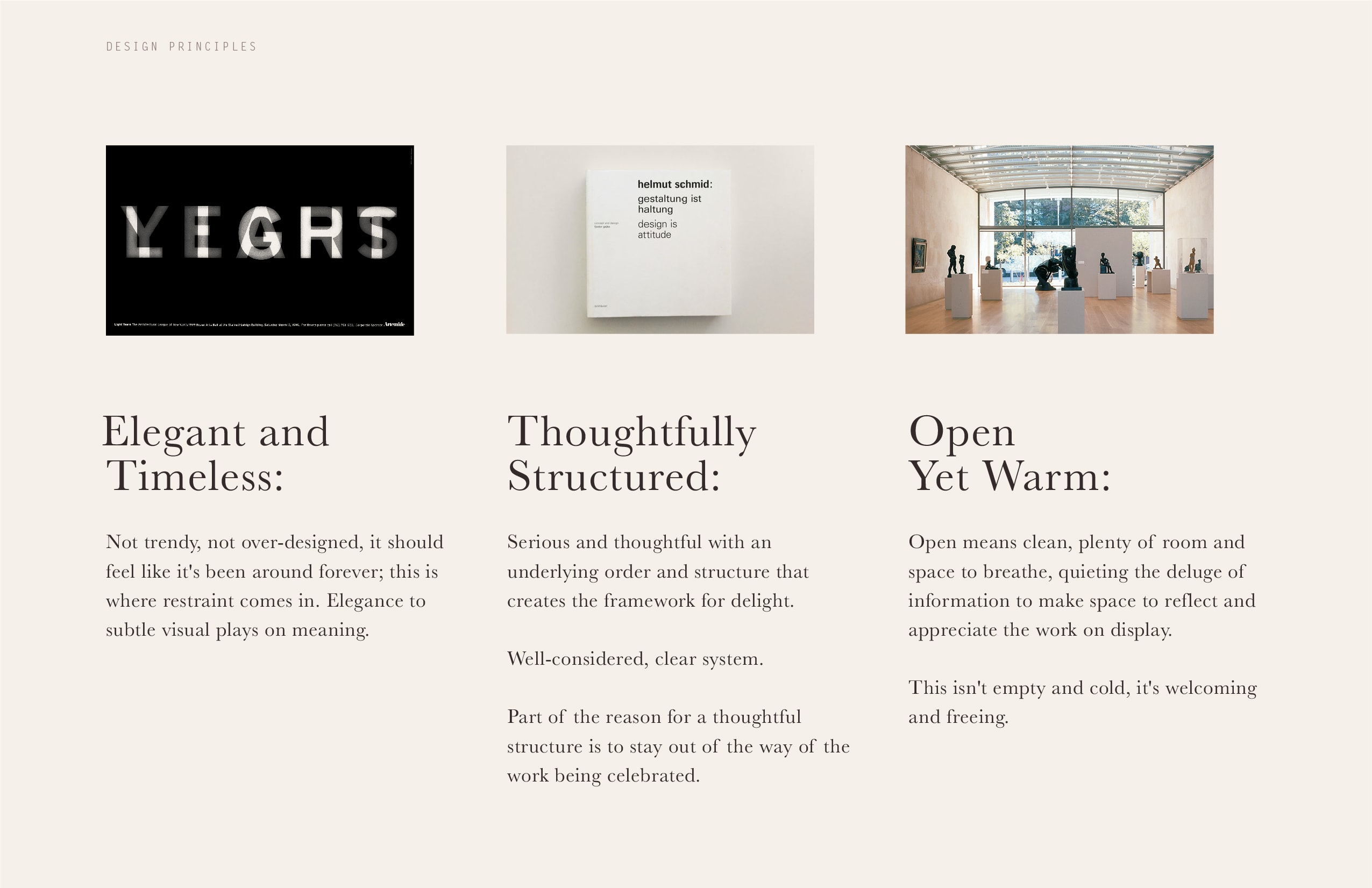 We also recognized a key tenet would be balance: The balance of Motionographer’s community of inclusivity with the exclusivity inherent to any kind of award. Balancing the sobriety of thoughtful discernment with the natural delightfulness of motion.

But on a more fundamental level, we would need to develop an identity that could be beautiful and set the right tone without competing with the entries. Our greatest inspiration on this front came from the world of architecture; the elegance and subtlety of art museums enables them to create a welcoming yet discerning environment in which to celebrate creativity. 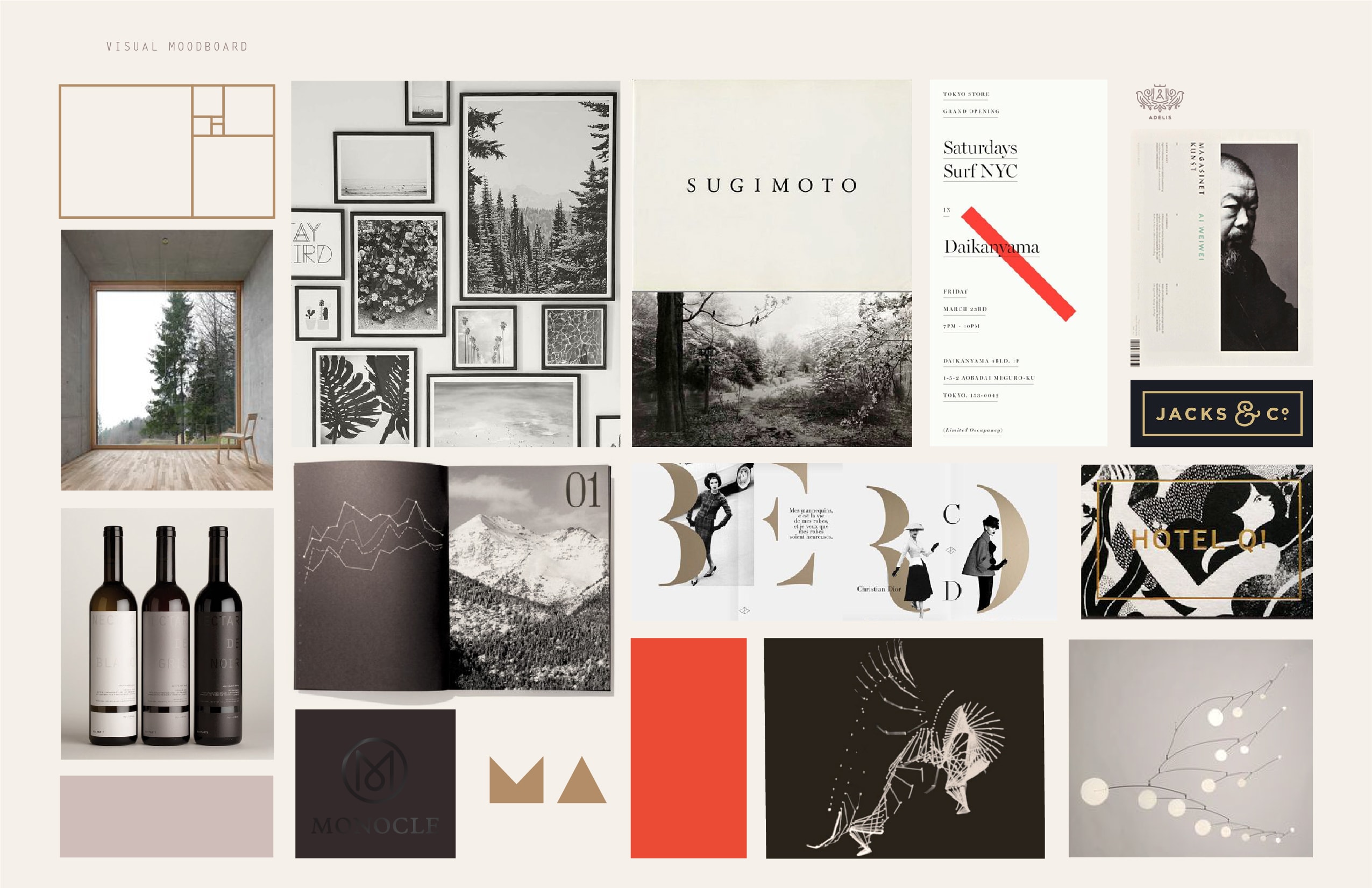 Within the rigid safety of our strategic framework we could now allow ourselves to get subjective without worry.

You simply can’t be bothered with cool when you’re earnestly focused on satisfying the complex components you’ve carefully assembled.

Our first concept was inspired by the visual of a bouncing ball. With its relevance to the history of motion and animation principles, the iconic bouncing ball seemed like it could be a lovely metaphor for attempting to reach the pinnacle of achievement while the elegant arcs felt classic yet unexpected and delightfully resolved into an M and an A. 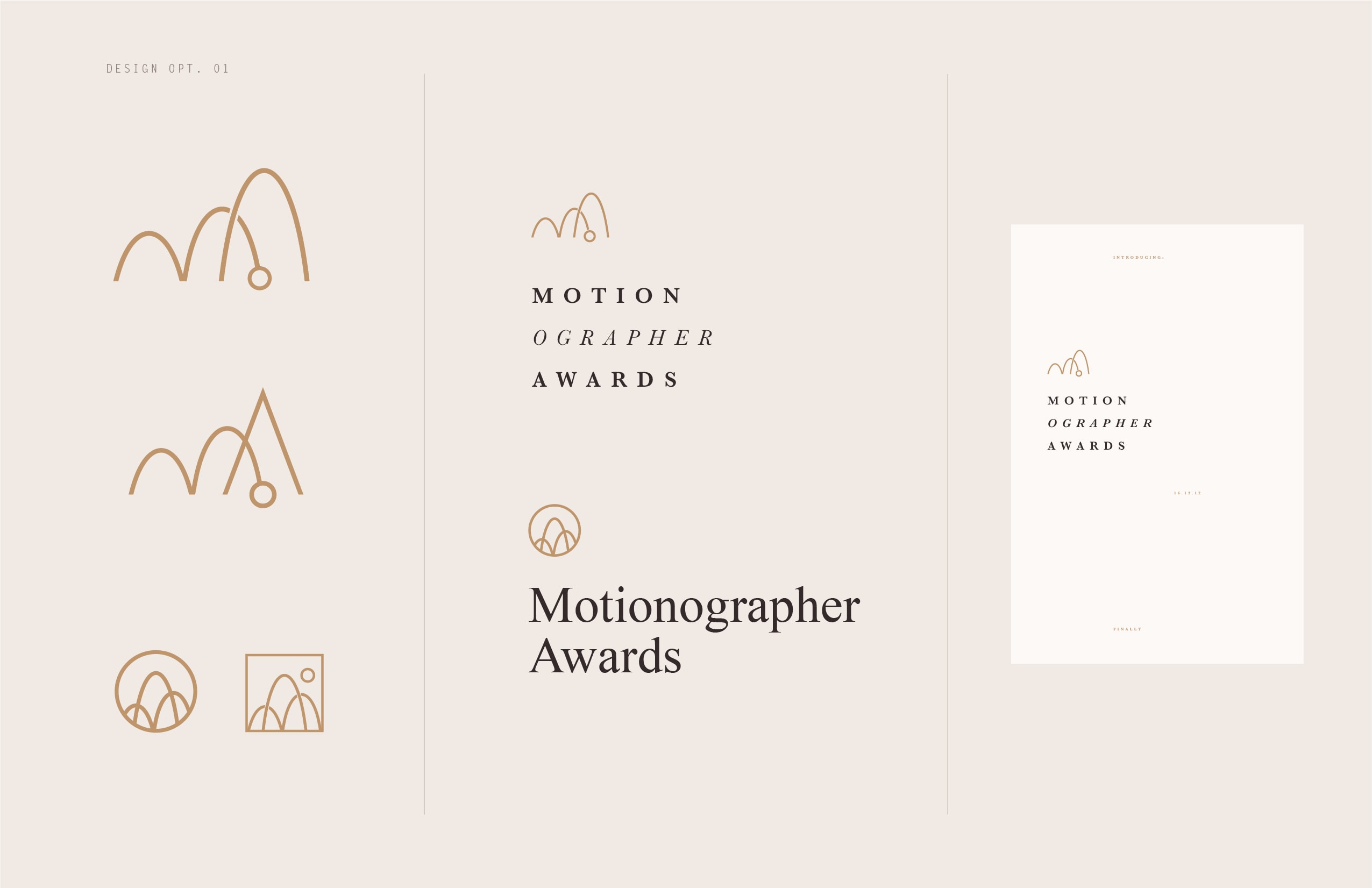 Mercifully that question never suffered debate as our second identity better captured the essence of the brand. The concept was a bit less overt, and celebrates the power motion has to tell a compelling story with a single shape over time. We paired simplicity and repetition with the idea that The Motion Awards would always function in service to the work it celebrates in the same way that a frame focuses and elevates the work within. 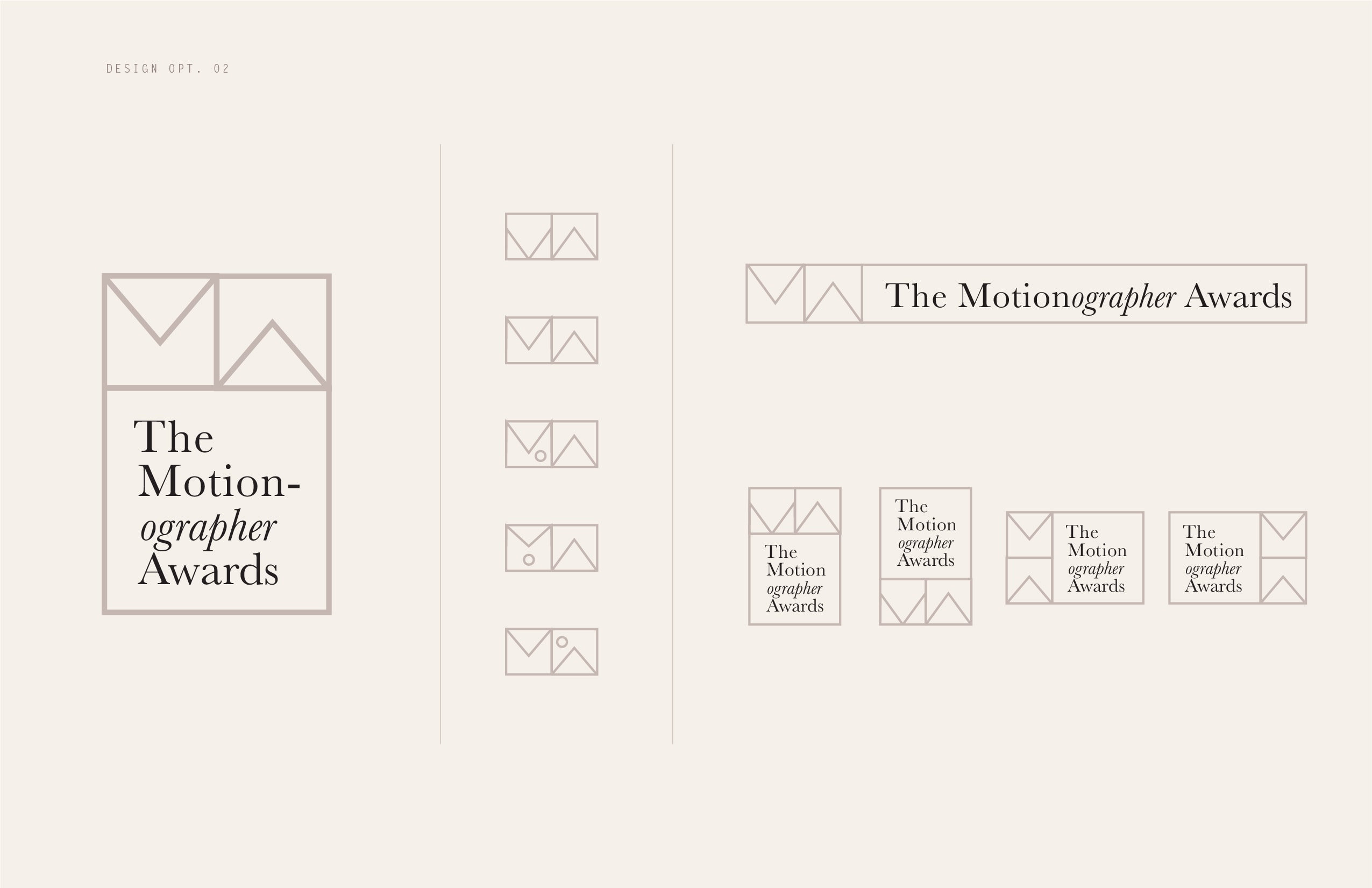 With all the designs, we were struggling with the length of the word Motionographer and attempted a move that didn’t work but would eventually lead to a revelation...

This design also had the added benefit of nodding back to the geometric sans M of Motionographer.

We also had a third option that was a sort of hybrid of the 2 ideas: 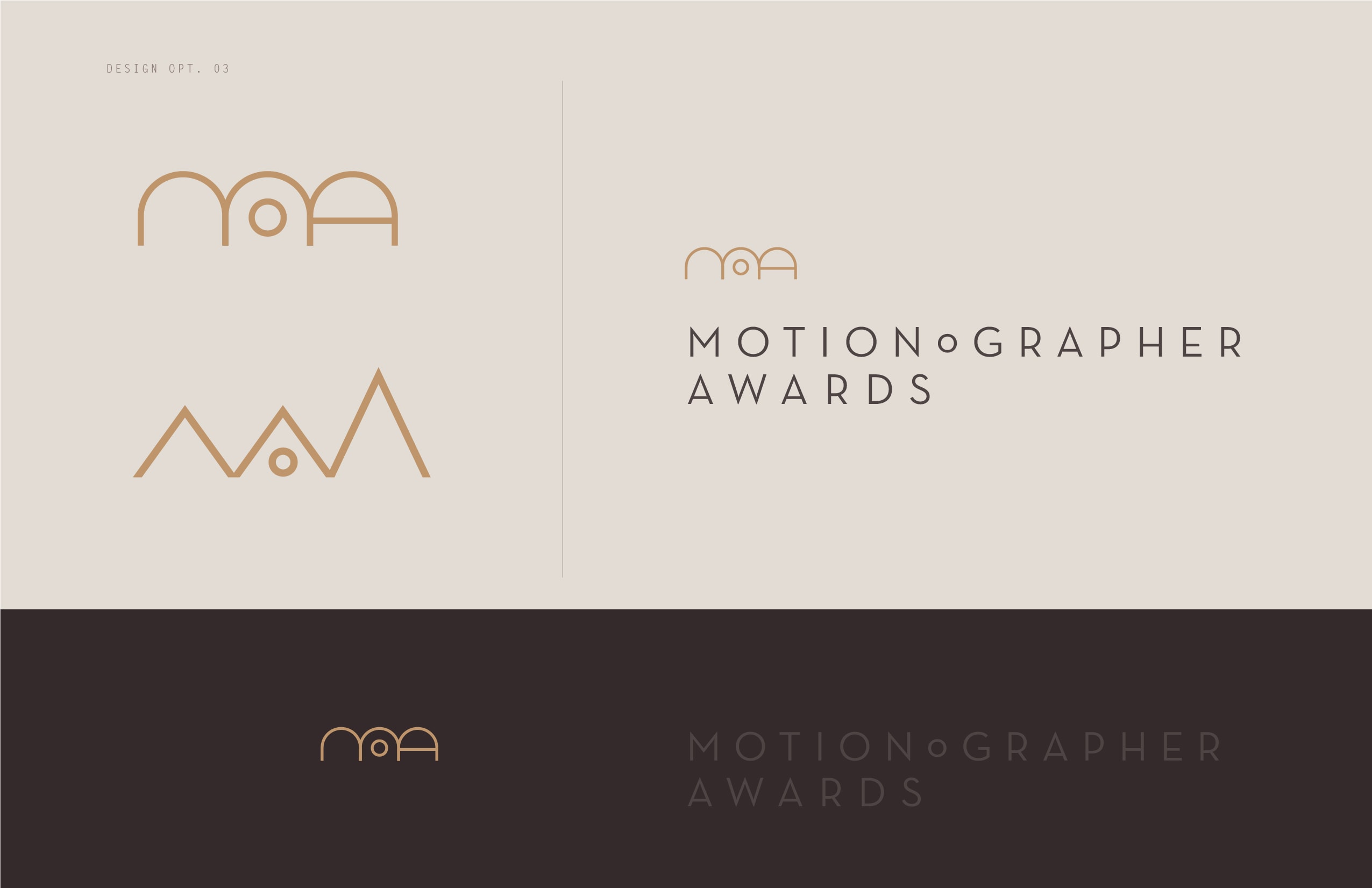 With concept in hand, our machine was now fully functional. Our goal was to keep passing the work back through the machine to make it stronger.

With our focus trained squarely on the criteria, concept and constraints — and finding stronger and more meaningful ways to bounce off of them, there’s no room to worry about cool. It’s not us making something to satisfy our own egos, but rather finding ways to answer the machine.

It was as we continued to refine the work that the name officially changed from The Motionographer Awards to The Motion Awards. 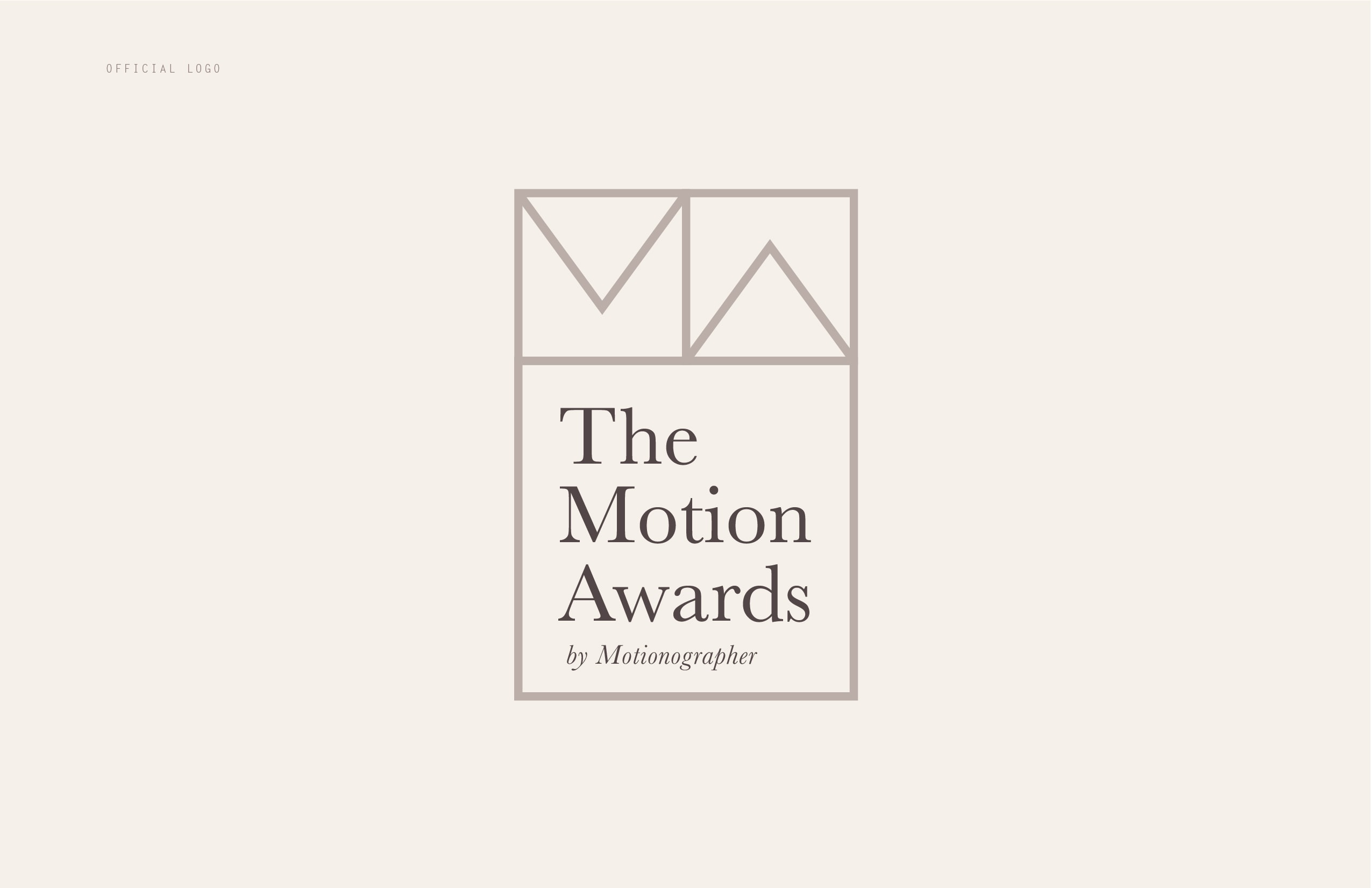 In the same way our graphic choices became stronger as we continued to measure them against our principles, the name benefitted from the clarity and ambition of our machine as well. In changing the name, the awards were able to became more timeless and more open-ended; open to more than just those already familiar with the Motionographer name.

The shorter name was also much easier to work with :).

Hopefully you’ve noticed that these sections keep getting shorter. With all the thinking and work done up front, our machine was finely-tuned and humming along. Each successive design challenge practically generated itself. We were always there to push and challenge the constraints, but every time there was a question of what could be, we likely had a ready answer for what should be. 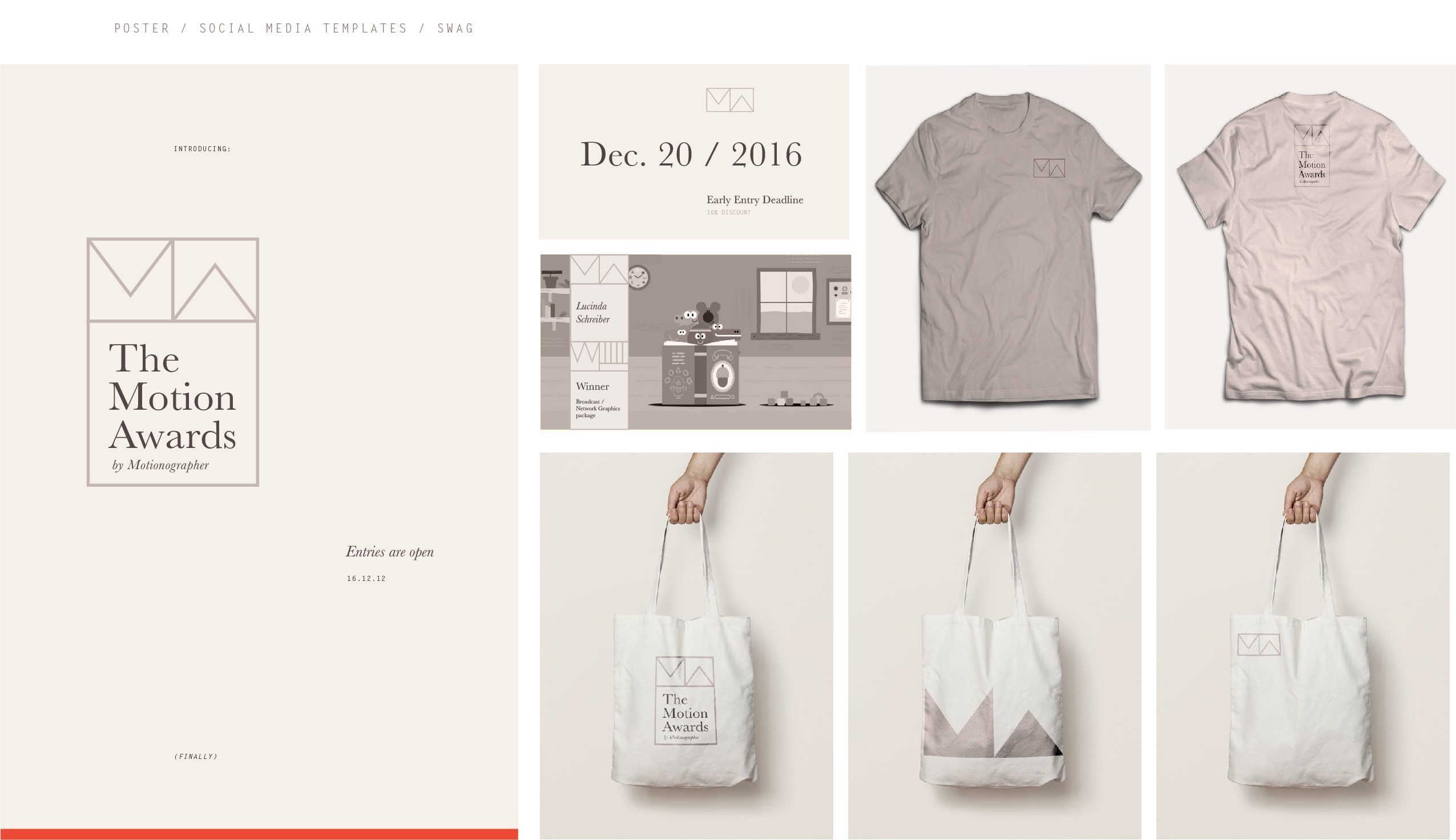 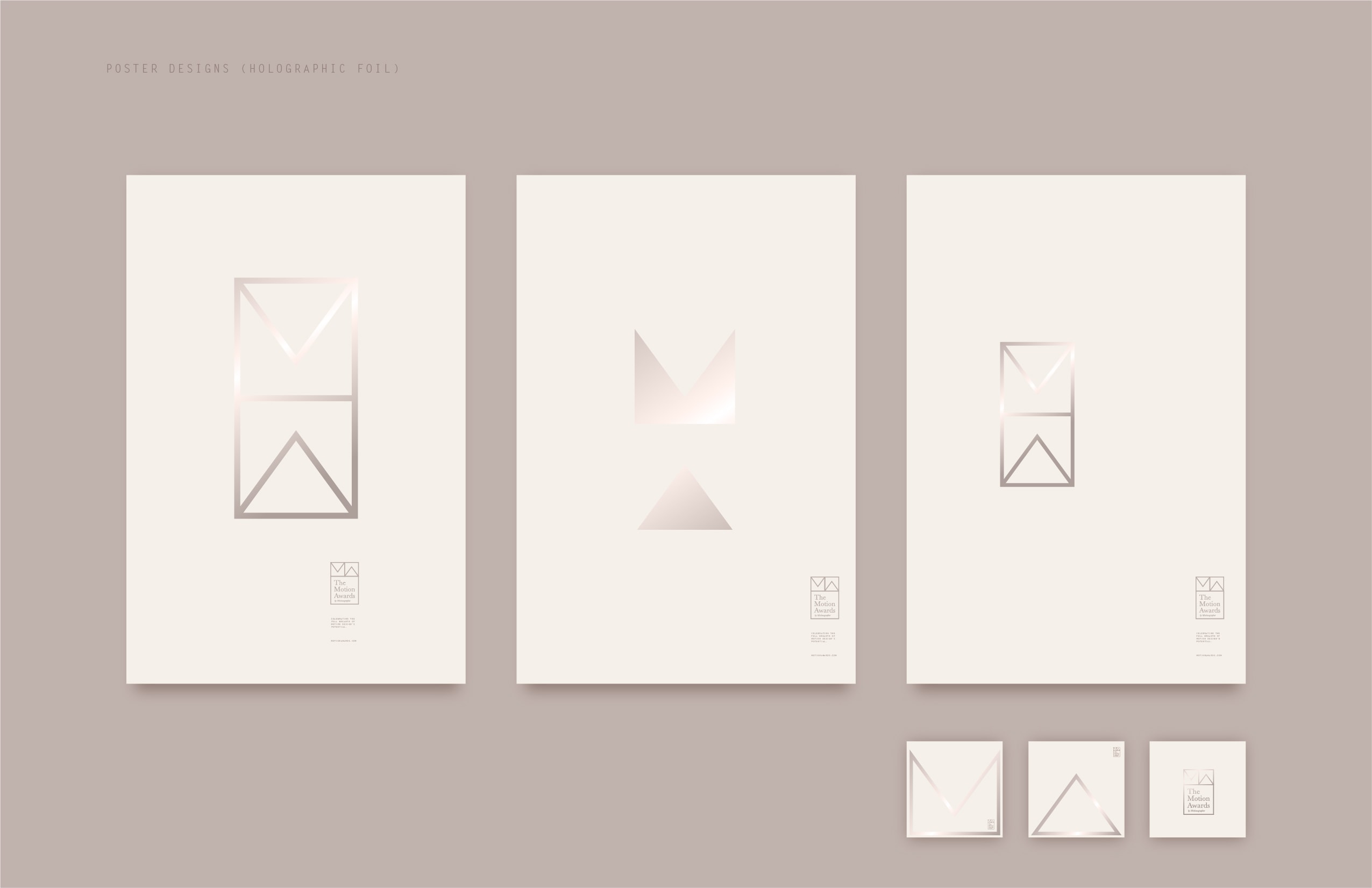 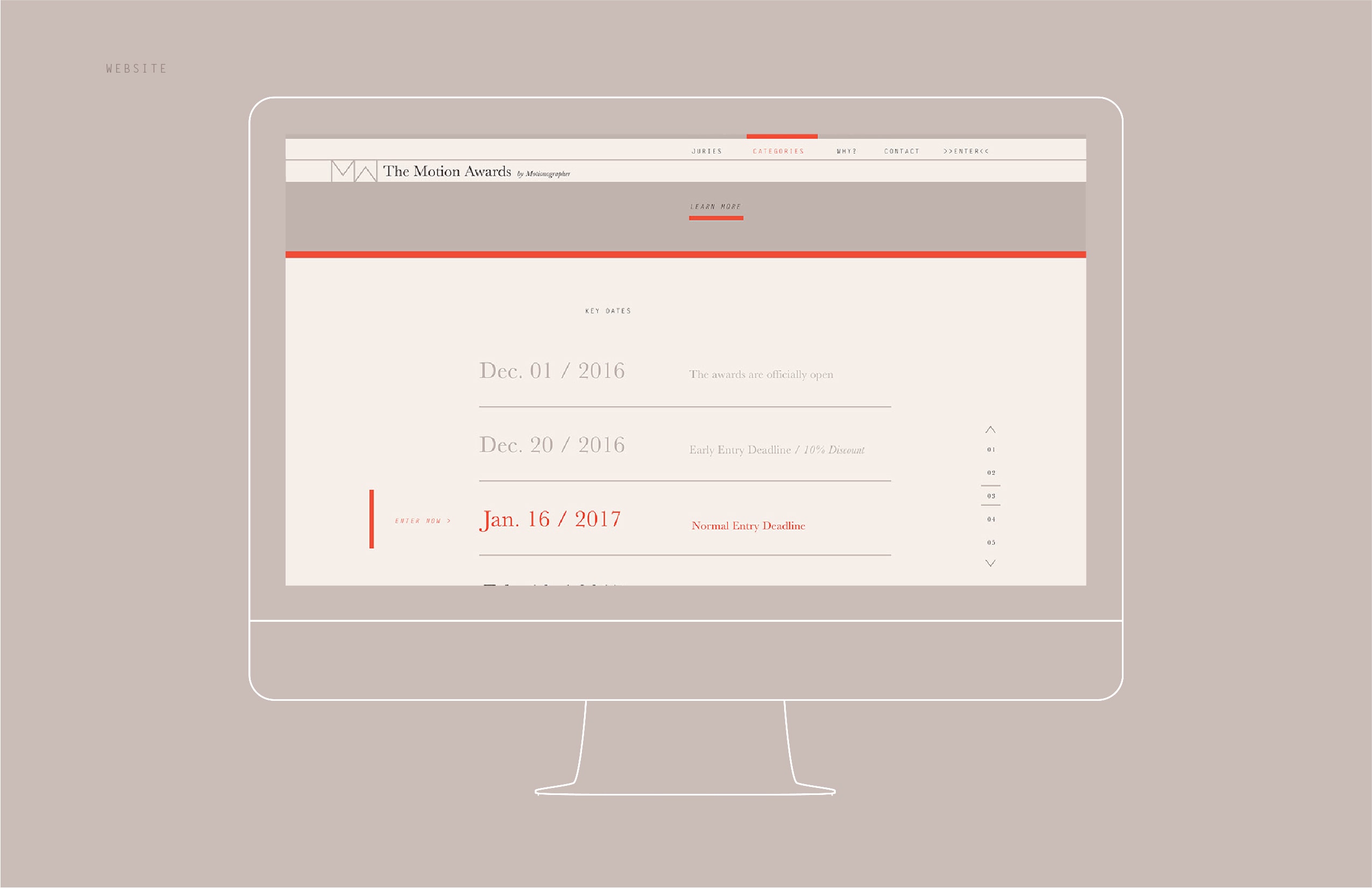 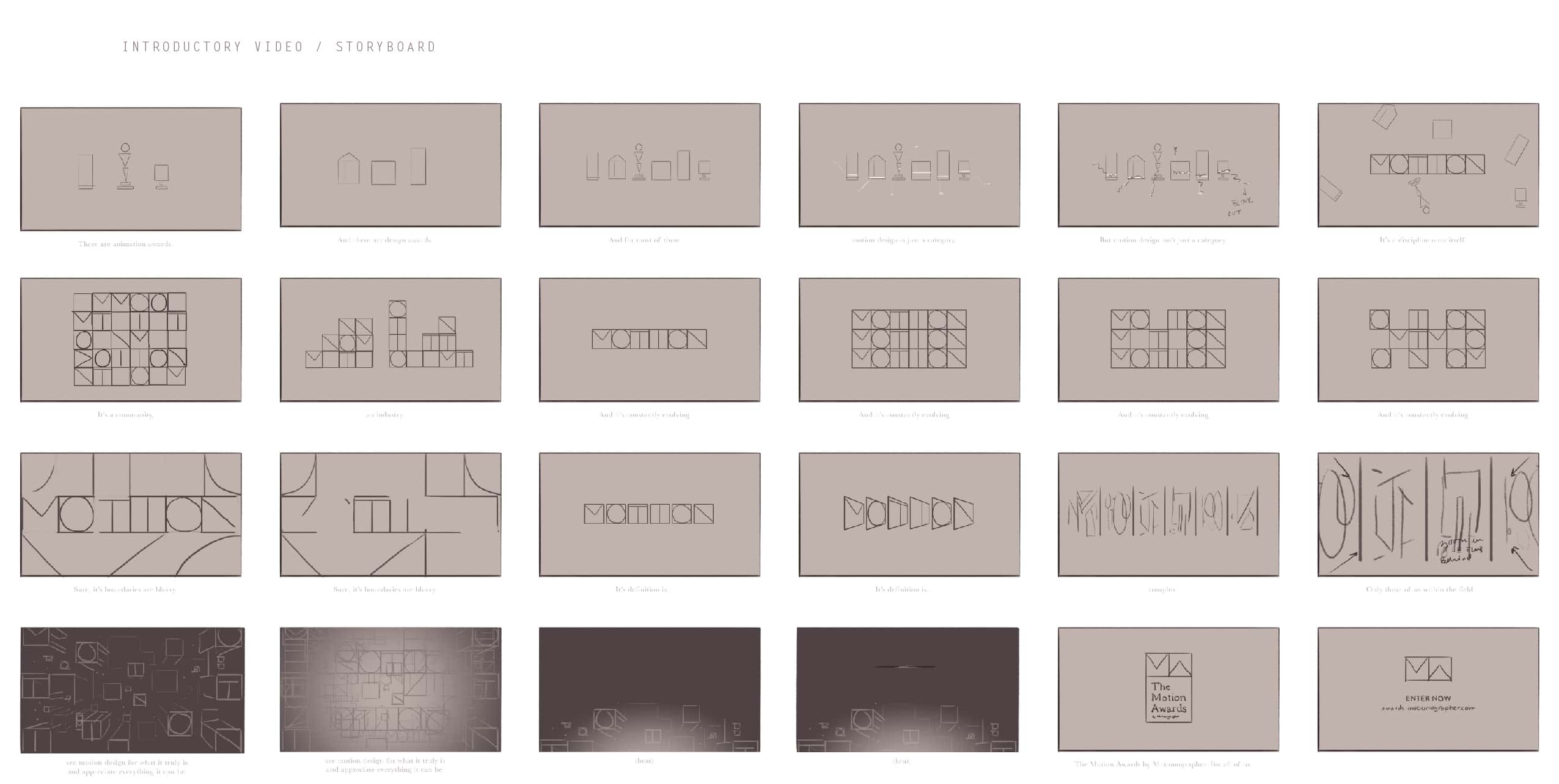 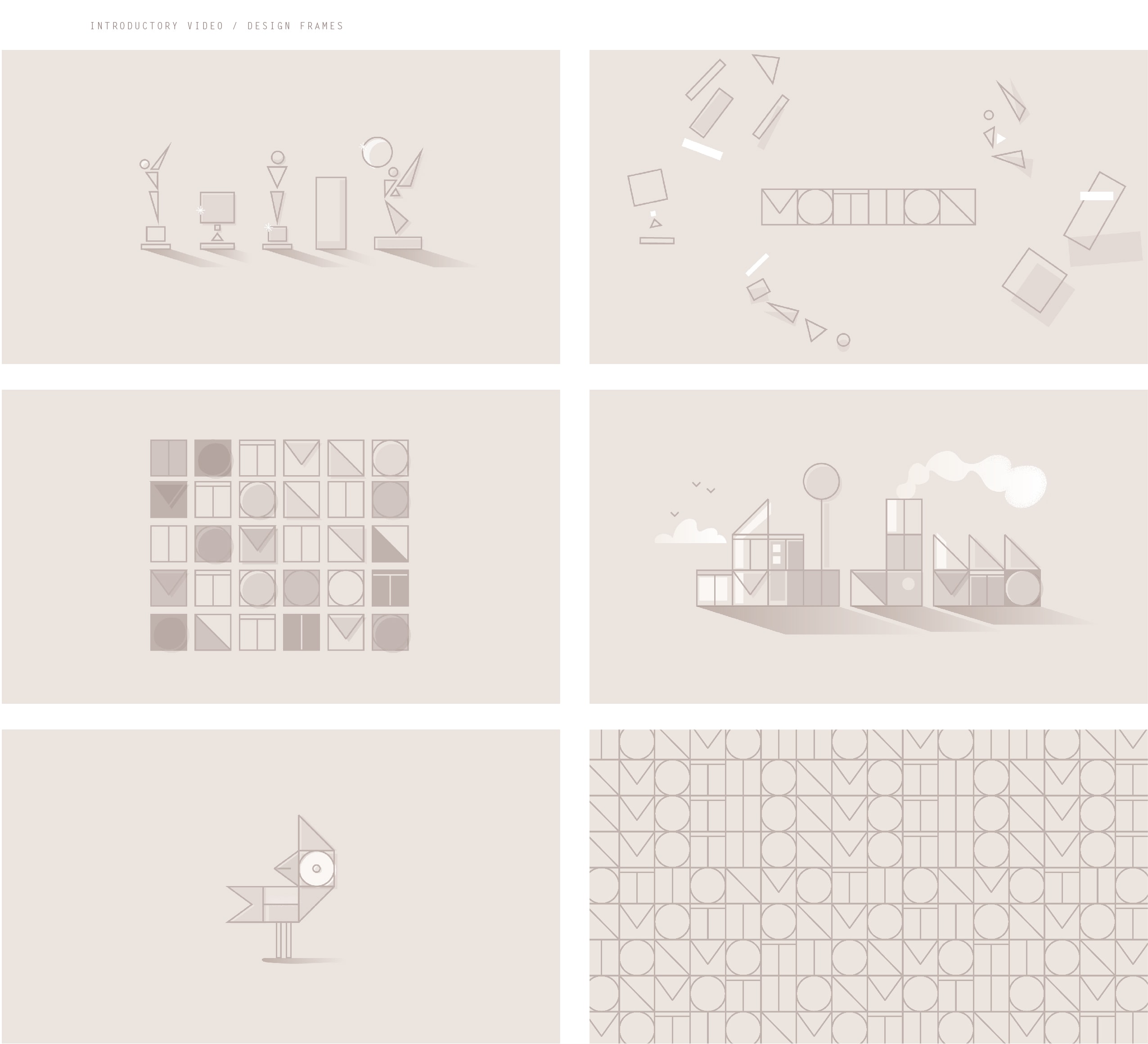 Whether it was a website, a mailer, a trophy or an introductory video, the machine told us what the next output should be.

And for us, that’s the beauty of design. It’s not about our coolness, but about working together to create an elegant machine that will generate work that is right in a way we could never have conceived of on our own. That externalization and the pursuit of the appropriate protects us from self-doubt by absolving us of the arbitrary. We can feel confident we did everything possible to stay true to our core principles and let those define our output and not just our subjective preferences.

It was a privilege to design The Motion Awards for Motionographer, and we loved every second of it — once we gave ourselves a break and let the design generate the work.