I may be a bit biased given the fact that I contributed to the project, but I think there is something truly special about Erica Gorochow’s new collaborative film, “Dear Europe.” What makes this project so unique isn’t just the look of it but, more importantly, its message and what it means to us as animators and designers.

As many of you may have noticed, we are living in turbulent times. With so much divisiveness it can be hard to cut through all the noise. It’s even easier to get swept up in all of the drama and to forget that we have power and can contribute. For those of us working in the animation and design world, our job is to communicate, inform, and to bridge gaps. We are a tremendous resource and it’s times like these that we stop just selling sugar water and invest our efforts in causes we believe in, causes that just may be able to change things.

Thankfully, Erica is the woman with the plan and is here to show us how it’s done. The following is a conversation between her and me about “Dear Europe,” what it means to her, and what she hopes it accomplishes.

Whoa, that was a wild ride! Can you tell us how “Dear Europe” came about?

The election in the US just devastated me. It left me with such a feeling of emptiness. But over the course of 2016, I also reflected a lot on being in the business of communication. And feeling empowered by that. People do pay us to do this, after all.

Also, I had seen a video that went viral in Austria right before their election in December. Before that vote, the far-right candidate was widely expected to win. But in the end, the green party candidate prevailed quite handedly. I’m not saying this video changed the election: but I wonder how many saw it and decided either to change their mind or vote when they previously had not planned to.

So at the end of last year, to combat sinking into anger and anxiety, I dumped ideas into a big, rambling deck. Something concrete so it was easier to share and discuss. One of the ideas I kept coming back to was a collaborative video about the elections in Europe, which are directly in front of us now. Inspired by Claudio Salas’ model, I thought bringing together artists in the US and the UK would naturally underscore our message.

What were some of the notes you were hoping to hit with “Dear Europe” and what are your hopes for the film?

I spent around 2 or 3 weeks on the script and got a lot of outsiders to give me feedback. Many of them from Europe, so I could check how the tone was coming off. This was really helpful. Their feedback made the tone a bit less… pedantic.

I wanted to be both diplomatic but sharp. To be emotional without being sweeping. I tried really hard to come off as honest. To just say: look, many of us really didn’t think it’d happen here. If you’re liberal or moderate, don’t make the same assumptions we did. 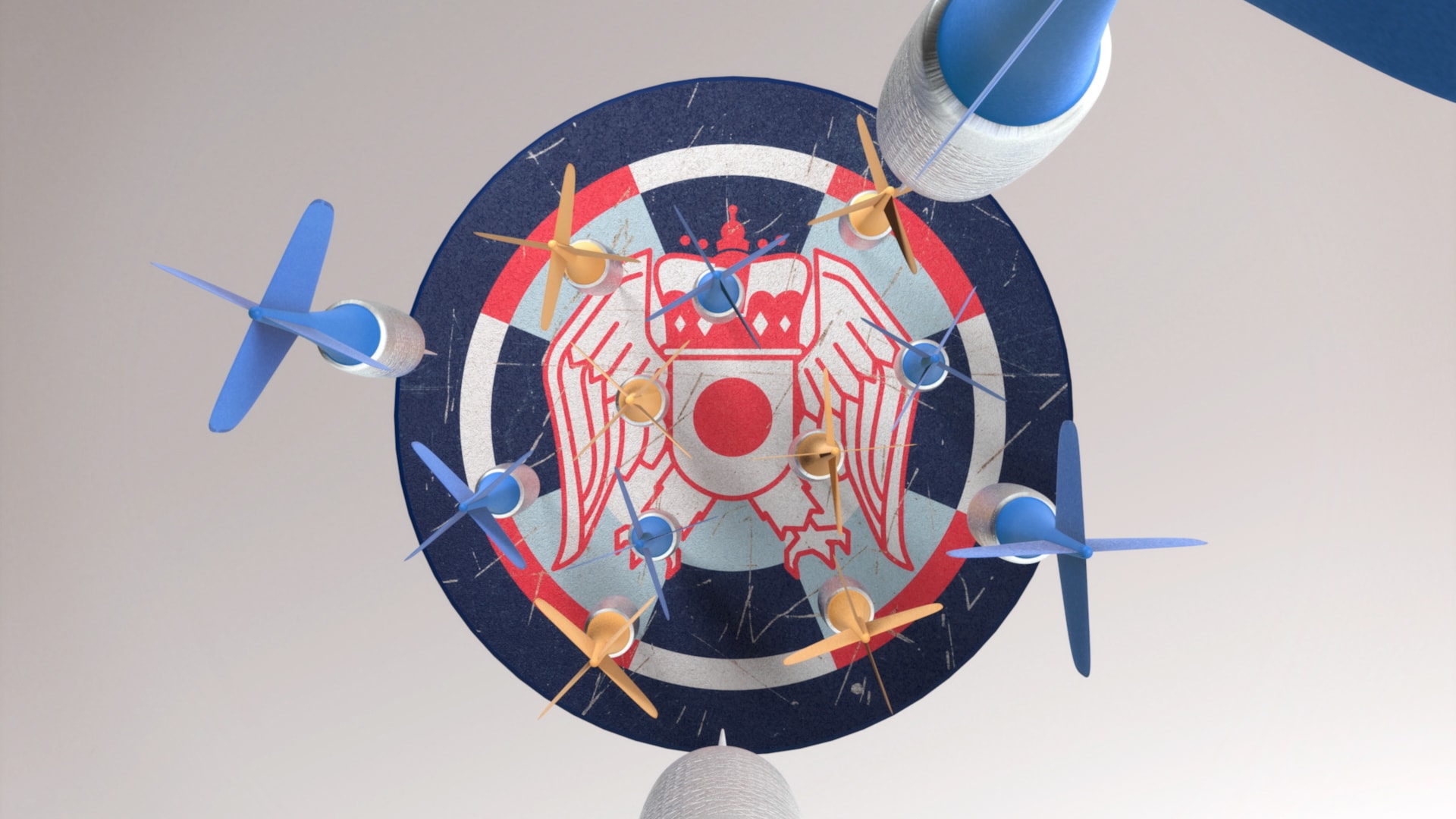 This is obviously a really big topic and I’m sure writing the script was a daunting task. What type of research did you do for the project?

I have previously lived in Germany and have friends there, so while I’m no expert on European politics, I do pay some attention. I had also been naturally reading a ton about Brexit and our election. My twitter feed is like 65% politics now. (For better or worse, I’m not sure).  To make the video, I read even more. This article from FiveThirtyEight really cut deep. (This one too). I think the key is turn out. Young people just do not vote with the same regularity as older folks. 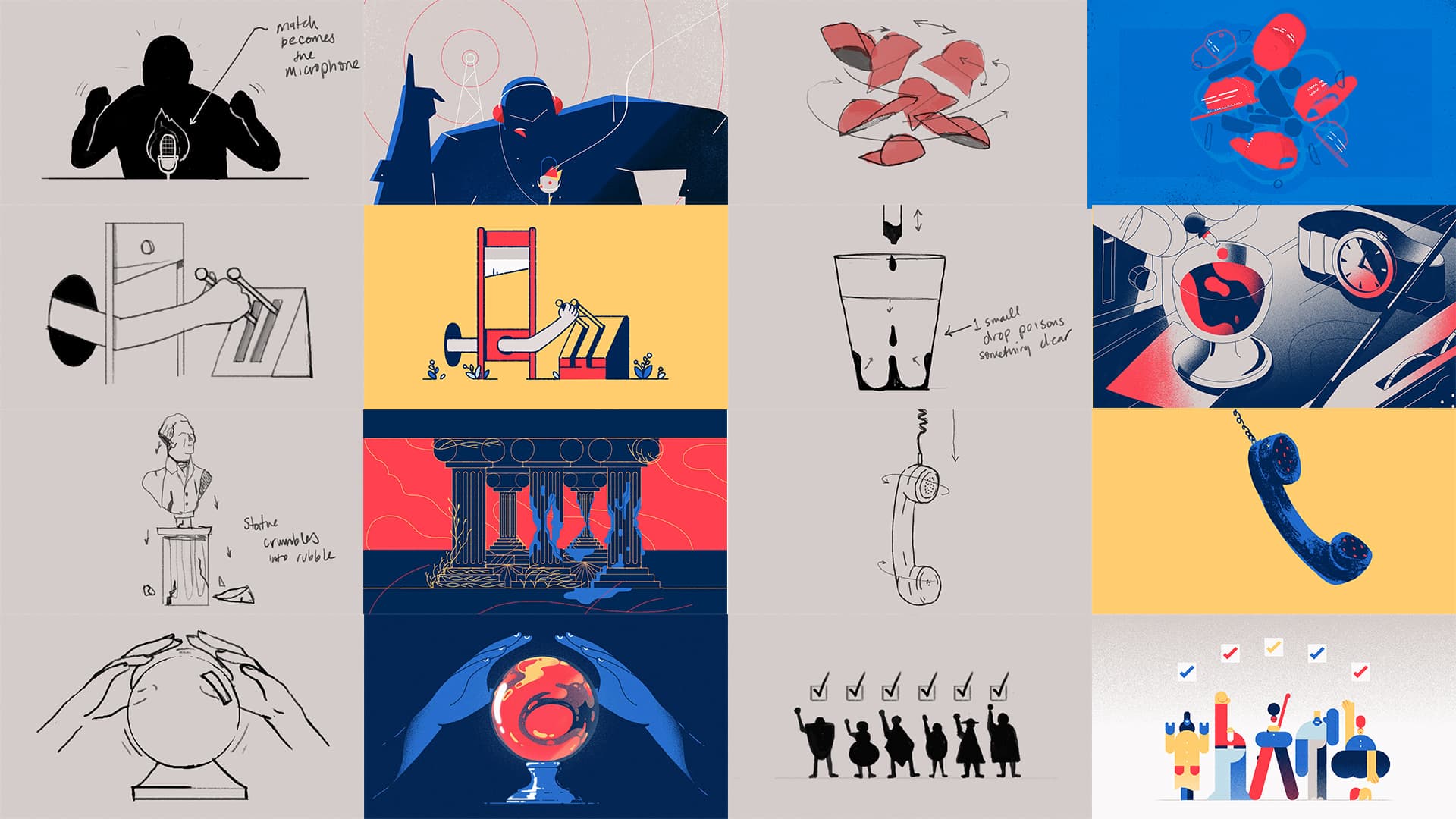 I’m sure this was a unique experience for you leading such a big collaborative project. What was the hardest part about it?

I always had to be ready to answer an email and be as prompt as possible with 22 people across different time zones.

I think to make these kinds of projects work, you really, honestly, have to have it together. If you drop the ball, everyone suffers. I tried really hard to see obstacles and opportunities way in advance, so that we wouldn’t have to double back and change things (too) last minute.

Not doing 2 minutes worth of animation all by myself! Also, compliments to everyone involved. Considering how many people there were, I really didn’t have to wrangle *too* much. Ross and Cody from Upright T-Rex Music are also so brilliant: they basically nailed it on the first try.

Similarly, what was going through your mind when you were reaching out to people to get involved and how did you decide who was a good fit for the project?

I tried to first, ask people who I knew were upset over politics. People I either knew personally or who I saw speak out online. I really wanted to invite people who cared about the message to participate.

I started with a small group, reaching out to you (Joe) and Bee Grandinetti to help be point people to bring others on board. I feel like my network is decently big in the US, but not so much in the UK. They both helped provide personal intros to animators who they were friends with, some of whom I didn’t previously know.

Some invitations I also sent cold — I crossed my fingers — and sometimes got lucky! I also tried to get a good mix of industry vets and younger animators who I think are wonderful. Decent gender balance was important to me, too. 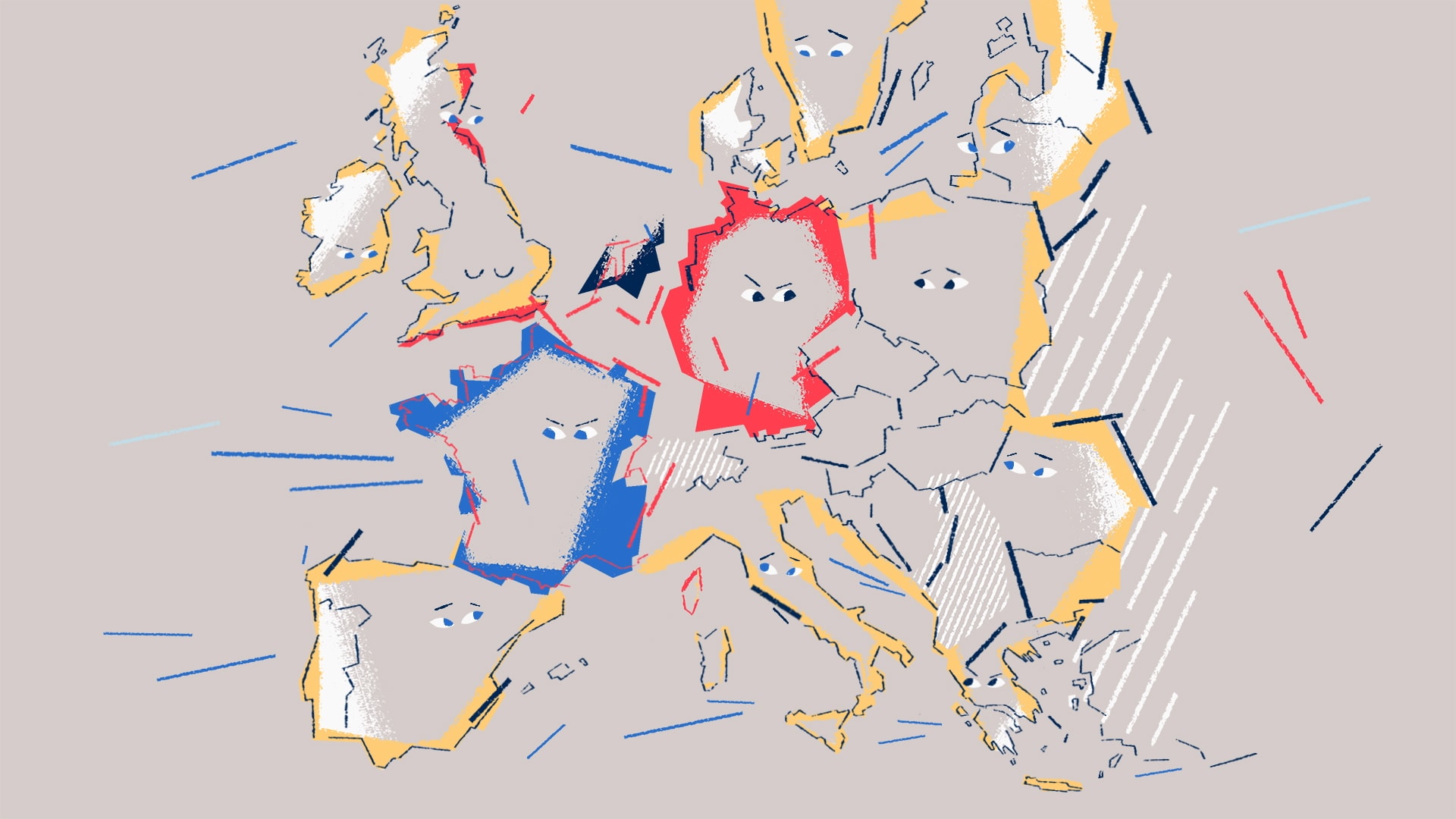 Do you have any cool guerilla marketing (haha) underway to help promote the film and help it gain traction?

Yes. Through other side projects, I’ve gotten a very basic sense of marketing strategy. I thought a lot about people watching the video on mobile. So we made a vertical version that looks great on your phone. Statistically, people just watch vertical videos all the way through, and I really wanted people to get to the end. We even did a version optimized for facebook. We also subtitled everything on Vimeo and even recorded the VO in French, Dutch and German.

Also, the video will be running in Two Dots just before each country’s election. It’s playing in the Netherlands now, as the election there is March 15. If you’re a mobile game company, I’d love to talk to you.

This is your second politically themed project, was there a particular flashpoint that made you want to do more?

Yes. Third actually. My fiance and I also threw together calltrumpout.com very late last year. Before that was VoteGif.com.

I’m someone who has always paid attention to politics, but rarely wanted to discuss it, especially online. But so many things Trump is doing deeply concern me. I can’t stay silent. Doing projects like these, using my skills to these ends, helps quell a nervousness inside me — and channel my frustration into something, hopefully, constructive.

For anyone out there wanting to get involved and do more, what advice do you have for them?

If you’re looking to make work about subjects like elections or politics: It’s really easy to yell. (I’m not above it. Sometimes you gotta.). But, ask yourself, how do you build a bridge to bring people over to your side? People still want to gravitate towards something positive and to feel productive. How can you create that?

Finally, now that this project is wrapped, what’s next? 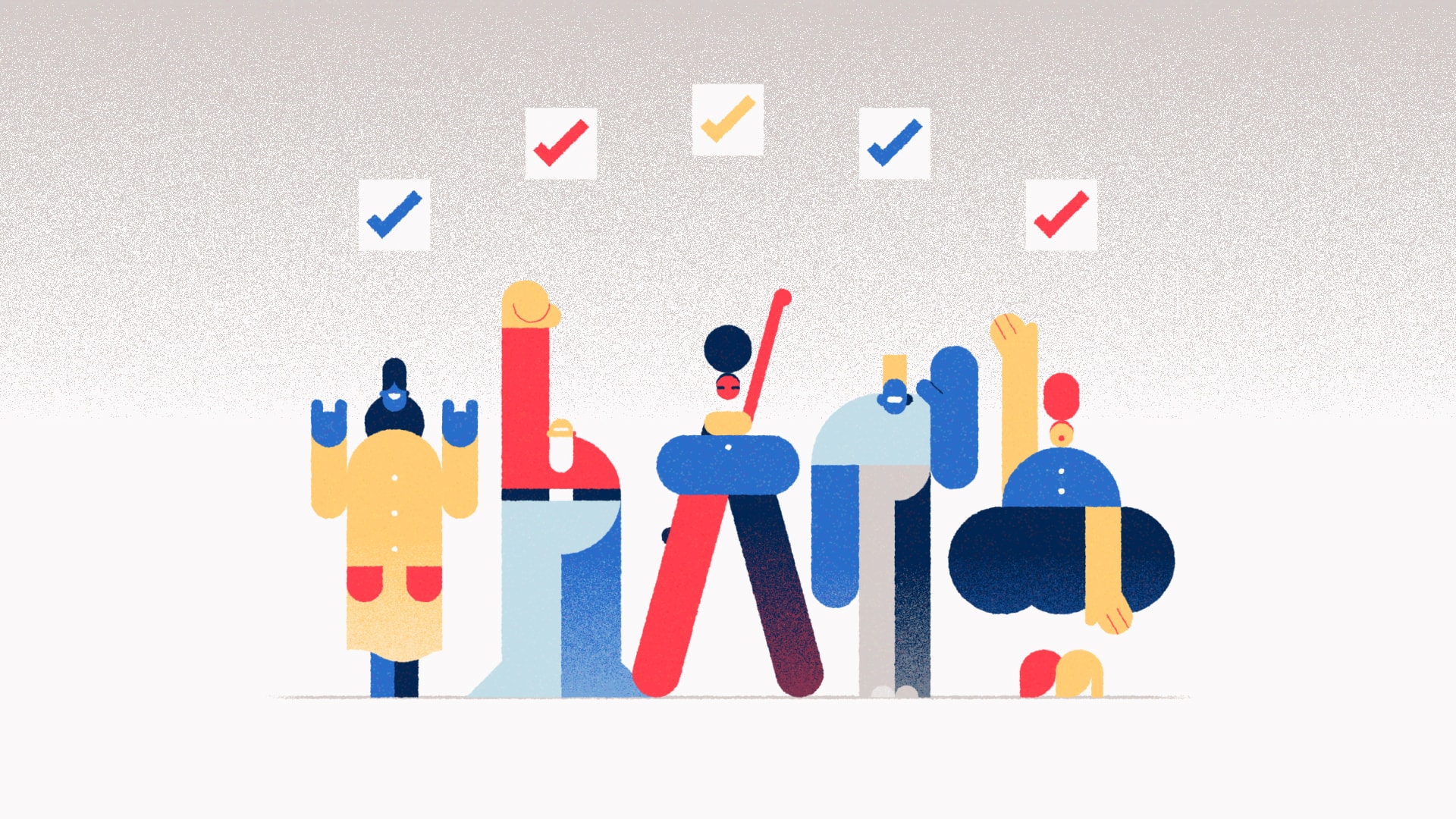 Lastly, here are some additional thoughts from a few of the talented people who worked on “Dear Europe.”

“In the UK, the referendum was intended to settle the debate on Europe but it only seems to have made it more caustic, and the ‘winning’ side seem angriest of all… Following both Brexit and the US election, I was overwhelmed by a sense of the relative triviality of my work, my interests, and my everyday concerns. So when asked to contribute to Dear Europe, I saw it as an opportunity to use whatever skills I have to engage positively with issues that can often seem insurmountably large and complex. An appeal to reason isn’t in itself a solution, but it has to be a decent place to start.”

“As creative professionals, we can no longer accept the status quo of leaving our social consciousness at home when go to work each day. We can no longer rely on the right-wing government to protect our interests, our health, or our planet. The stakes couldn’t be higher and we must take a stand. Our hands have been trained for years at crafting concise and powerful visual communication and yet the tragedy is that when we go to work each day we are asked to use them in service of corporate overlords who continue to push the stability of our earth off a cliff so that they may improve their quarterly earnings. Our act of resistance is to re-appropriate these skills in crafting a message of warning to our European brothers and sisters from our place of hindsight; warning them to avoid the hell we’ve found ourselves in at all costs.”

“I really hope Europeans actually go vote, not just protest a result they didn’t vote for. ”

ARTISTS (IN ORDER OF APPEARANCE)