Our industry is constantly shifting and the internet has acted as a major catalyst in our medium’s evolution. More and more the scales seem to be shifting away from media buys and broadcast safe colors to web videos and branded content. When you add to that the interactive capabilities of social media, things have changed drastically just over the past few years. Facebook has played a substantial role in this through their personalized videos which only seem to be growing more frequent. Buck has created a slew of amazing work within this medium. Now, with “Good Adds Up”, Nexus with Johnny Kelly at the helm are throwing their hat into the ring and contributing to this growing movement of personalized content.

The following is a Q&A with Johnny Kelly about his experience working in this medium and how he sees this affecting the industry at large.

Congrats on the new project with Facebook. Can you tell us a bit about how it came about?

Thank you for featuring the project! Nexus Studios had done some work for Facebook in the past, including a thrilling set of animations by Nicolas Menard last year, so when they neared two billion monthly active users they asked us if we’d help celebrate the occasion by making a personalized film.

Their idea was to show all the great things that 2 billion people can do together. This could be raising money for a good cause, starting a group to tidy your local park, or just you and your friend playing with a turtle.

When working on the treatment, my ideas all sprang from their ‘Good Adds Up’ theme – I thought of ways these characters could ‘add up’ too, coming together and becoming more than the sum of their parts. In fact initially, they all stacked up together, a bit like Power Rangers. Here’s some rough concept art I made in the early stages below. Thankfully with the involvement of the creative team (at Facebook Factory) it ended up looking nothing like this in the end. Fitting characters together was also proving a little restrictive so we decided to free them up. 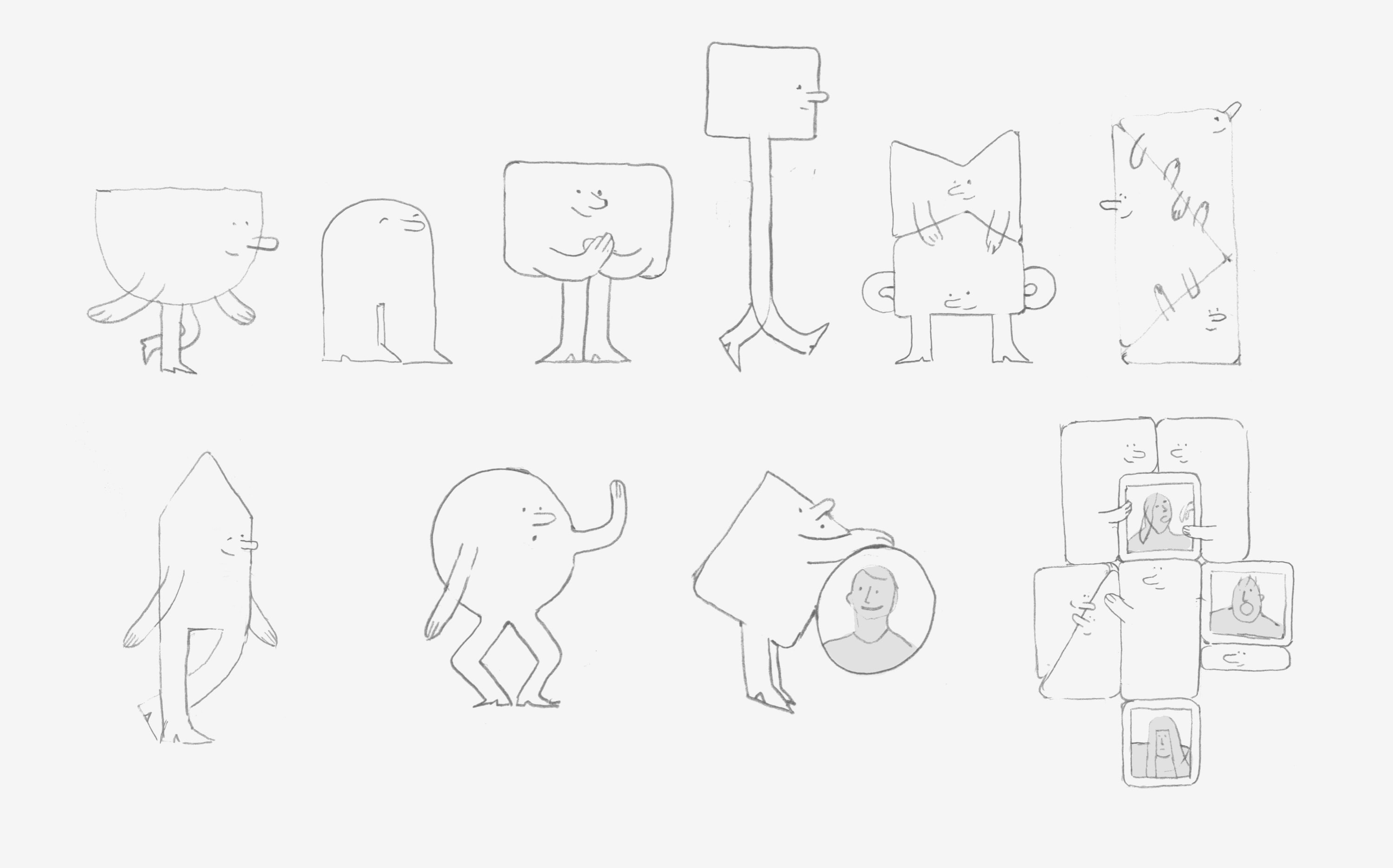 The films celebrate Facebook’s 2 billion users. That’s quite the audience! How did this affect your thought process going into this project?

We did try and make something that had fairly universal appeal, but we were also aware that if you try to appeal to absolutely everyone things can sometimes turn out a bit bland. This needed to feel a little odd and interesting.

I hold faith in that old chestnut – the more specific you are, the more universal the result – so we focused on these little characters all having human little interactions. You can see them helping each other, feeding each other popcorn or sharing little glances. They’re as human as they can be, while being barmy little fruit loops.

I love the designs and am a huge fan of Nous Vous. In some ways, I imagine the aesthetic was influenced by the need for these films to be universal. Can you elaborate on that?

I’ve had a creative crush on Nous Vous for a long time but we’ve never managed to work together yet apart from a millisecond on a Dropbox commercial a few years ago.

Working with them was easy – I would send them some very dry pencil layouts and they’d unleash a barrel of monsters. Nous Vous felt right for this – their kind of design side-steps any cultural specificities, so apart from the text translation there was really no need to localize the characters from one region to the next. In fact it kind of goes the other way – their characters are so outlandish they’re about as familiar to me in London as they would be to someone in Peru or Zimbabwe.

Our animators enjoyed making them move because each was so different to the next. There was no hope of applying a uniform animation style really – one might have giant tentacle arms, another might have no head, one is just a sausage etc… so each animator was on their own. Also, the timeframe was quite tight which meant we had no time to overcook the animation. I think you can feel the spontaneity and wonkiness in the final result.

Filmmaking, at least in our commercial world, typically takes a fairly linear route. There’s a beginning, middle and an end. Given that these animations are modular and personalized to each individual, how did that shape your process?

A big question from Facebook was if everyone has one of these films, how can we make yours feel different to the film that your friend (or grandmother) has just posted? So we opted to split the film into sections and made multiple versions of each section. When your film is constructed it’s a little lottery as to how yours will be assembled – there are sixty possible permutations!

Every film has a different set of photos of course, and it was a new experience designing and animating films with giant important holes throughout. Each photo is going to be entirely different to the last so we needed to make an animation that worked with any kind of image. This meant anticipating certain popular layouts – at one point we had a character lovingly stroking a picture when we realized no one knows what body part would be underneath his hand.

What was the technical side of this project like and can you tell us a bit about how this is achieved?

For one thing, we had to keep an eye on how render-intensive the films would be. Over a billion of these would be outputted, so if something took one second longer to calculate that could add up to 30 years of render time! So lens flare was ruled out, sadly.

Facebook composited the dynamic content on their end of course, but our team of compositors (ably propelled by project lead and Nexus Studios keystone Mark Davies) set up an After Effects framework. They did a brilliant job proposing the most render efficient methods, without compromising the quality of the final film.

With the photos themselves, we wanted an arc of sorts too. Facebook’s technical wizards were able to create a fancy algorithm that picked photos that suited each chapter of the film. So there’s one of you and a friend to start the film, then you with a group of friends, with a giant group of people, and finally special moments like when you got a puppy or got married. Of course, if you only have the five photos you uploaded in 2007 your experience won’t be the emotional rollercoaster everyone else’s is. 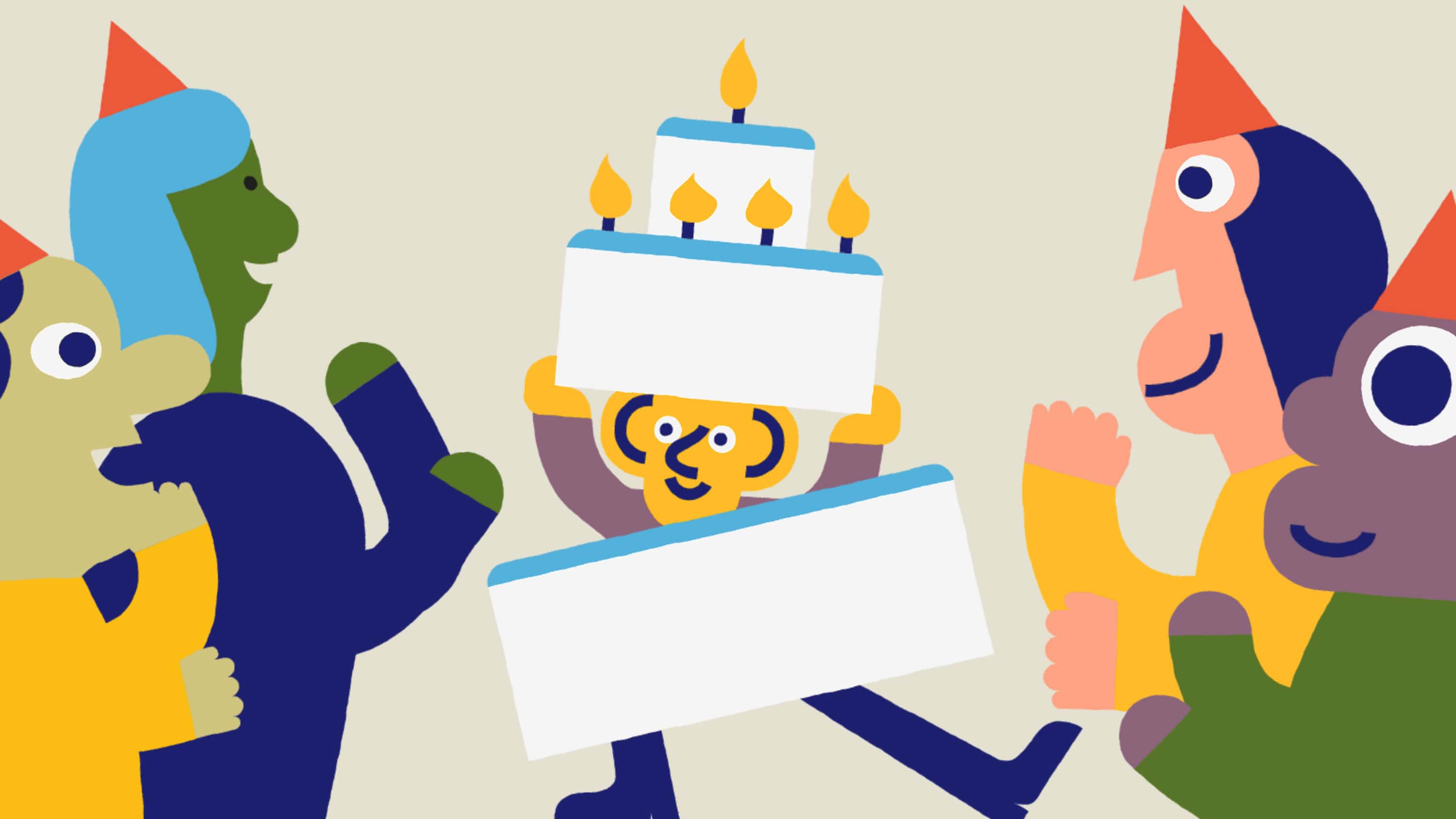 Where there any strict limitations that you faced?

One rule we had to adhere to was that Facebook were understandably keen to treat people’s photos with respect. So ripping them up might make a fun transition but was out of bounds.

Each film that is generated is roughly :60. How much content did you all have to create to make this possible and how many deliverables were there?

There were 28 bits altogether – so the film was split up into 8 chapters with 18 total variations. We also made some fun looping animations that pop up when you wish someone a happy birthday or join a group for example.

This type of personalized or interactive film has been steadily gaining traction. What are your thoughts on this and how do you see it shaping the world of commercial animation?

From my perspective, it is fun, even though the control freak in me has to loosen grip slightly. I can’t quite get my head around the fact we made an animation with a billion-plus variations, it’s something that would have been unthinkable until recently.

It is an interesting area for sure, there are so many ways a film could be customized. And if you know enough about your viewer you could completely tailor it to their tastes – the setting, the characters, storyline. The same feature film could be vastly different for each person watching it. Just think – if they knew enough about me I might enjoy the new Transformers!

You’ve been on a pretty steady and successful streak of work for big tech companies: Dropbox, Apple, and now Facebook. What would you say the pros and cons are to working on such big projects with such big clients, and how would you say it compares to working on smaller, more ‘mom and pop’ style projects?

It’s a good question! It is tricky to answer without a sweeping generalization, but here is my experience. Ordinarily, I would say on a smaller project you have more direct communication but that often isn’t the case. In fact with those last two projects you mentioned – Apple and Facebook – there was no agency involved, we worked with creatives based within the company. This can be good and bad of course, but it can mean that you are less shielded from the people that actually make the product/service/doohickey, the people that have to live with it long after you’ve moved onto the next project. As a result, they care a huge amount about it, and their enthusiasm can be infectious.

I’ve just finished a short film about a woman who falls in love with a fern. It’s an erotically-charged comedy drama, featuring a potted plant. It’s called ‘Fern’. We’re unleashing the trailer next week, so if that synopsis hasn’t already turned you off please stay tuned.