Rarely does a design studio get the chance to re-create the Golden Age of American Animation. The techniques and technology have evolved substantially since the ’30s but the level of fine craftsmanship required wouldn’t seem out of place today.

Borrowing elements from the ‘rubber hose’ style – with its particular morphology – and the instantly recognisable ‘bobbing’ technique, this music video takes us on a journey through time, telling a story of love against a backdrop of authentic Hawaiian culture.

How did the project come about?
In April, just when the pandemic was starting to hit home, we received an exciting brief from Partizan and Moving Colour to partner with directors Hoku and Adam to develop a video for Katy Perry’s new album, “Smile.”

Hoku and Adam, had a clear vision: “We want to make a video that takes what’s cool about Hawaiian kitsch aesthetics and use them to celebrate the local Hawaiian culture.”

Where do you begin?
We should start by admitting that we had a bit of a “panic moment”. I mean, she’s a global superstar. But once we recovered from the blackout, it was time to get to work. We immersed ourselves in research, focusing on breaking down the period’s animation style and its aesthetic references.

These ‘warm-up sessions’ led us to a deep understanding of how rubber hose animation – with its contrast of scale and height – mixed with anthropomorphic character design and the bobbing style of the period, all worked altogether.

One of the most endearing things about the 1930s style is that the animated characters were poorly integrated with the backgrounds. The technical limitations of the era meant that the different line strokes and types made the backgrounds look like watercolor and the characters seem flat.

How many artists worked on this project?
We built a dream team with about 30 artists in total.

How long did it take to make this 3-minute music video?
The whole project took 12 weeks from start to finish.  That includes working weekends, birthdays, and local holidays, (and there were a lot)

What was the design process for all the characters?
As Hoku & Adam developed the script, it became clear very quickly that we’d have to come up with a large number of characters and situations.

The first major hurdle was designing the main character, Katy Perry. We had six revision rounds, with approximately 20 iterations, before arriving at the final version. Our exploration was focused on how to create such a recognizable character within this 1930s aesthetic.

As we evolved Katy’s versions, we began to draft the rest of the characters: the dancer, the waiter, the boss, and the hula-lamp. During the process, we realized that we needed to shift a little more into ‘realistic’ anatomy and move away from rubber hose for the main characters. As this was defined, we began designing the rest of the cast: tourists, the ice-cream man, and all the characters in the final sequence. These included musicians, dancers, the boss’s mother, grandmother, kid, and lastly, the Harley Davidsons, which are also among the main elements in the video. 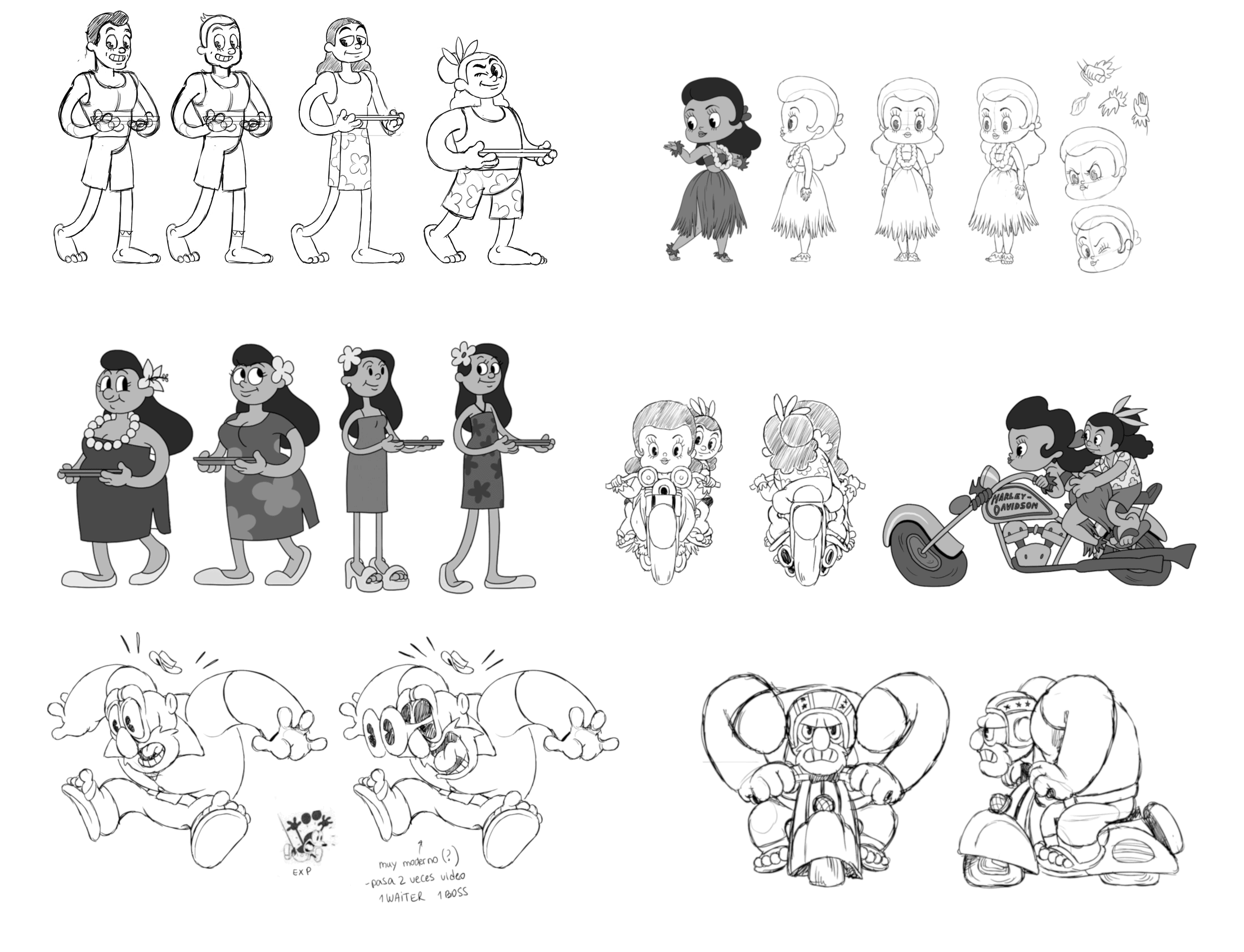 Initially, the secondary characters – especially Katy’s band – were designed to be more anthropomorphic.

We later evolved them into this. 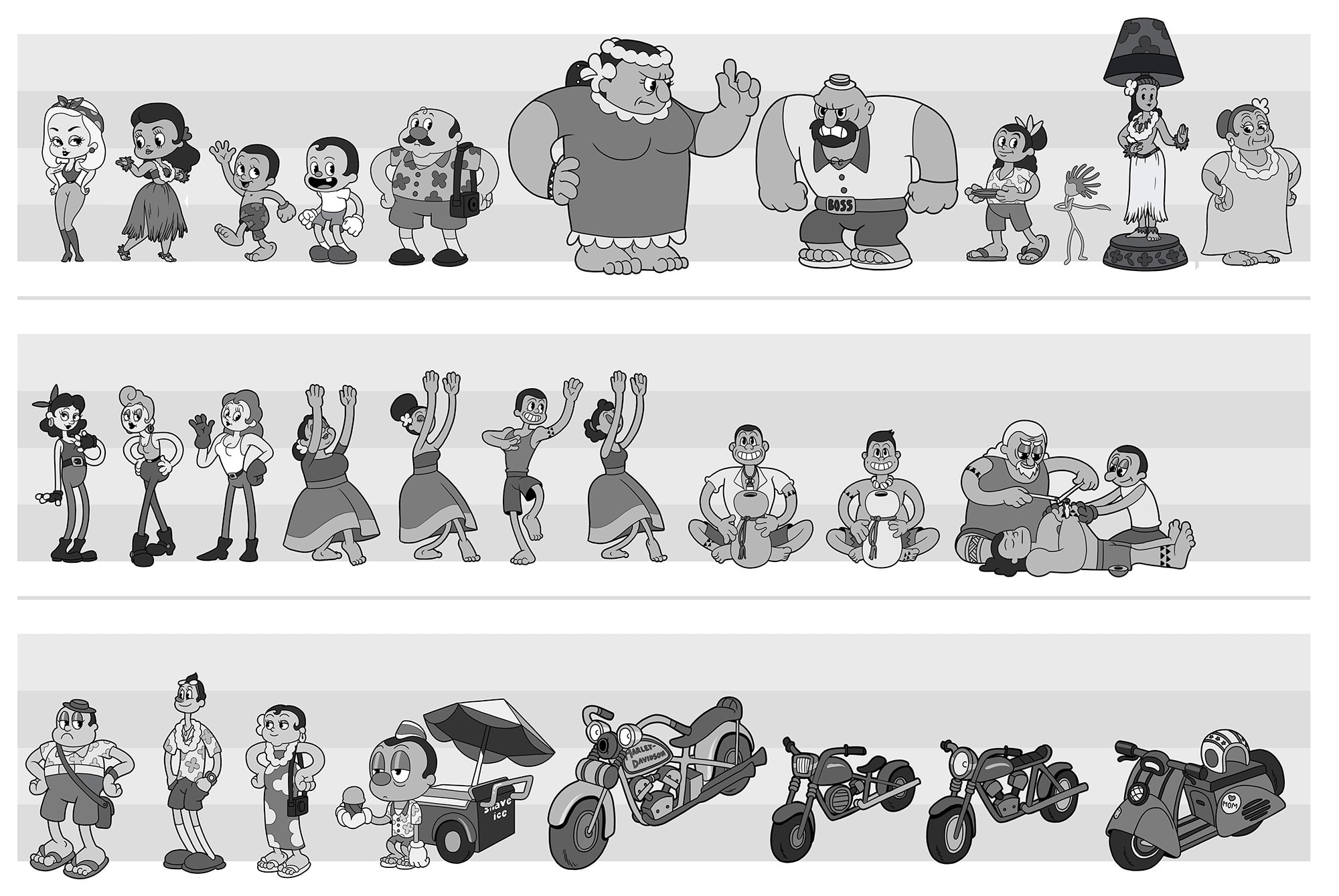 All the scenes in the music video are very rich and detailed. What can you tell us about the backgrounds?
We did extensive research on Hawaiian culture and the local community. We stayed loyal to our findings by incorporating many real references in our designs. The research really paid off as you can see in those details in the restaurant and landscapes, in the plants and the animal life. Hoku grew up in the Hawaiian community, and that was of tremendous help. 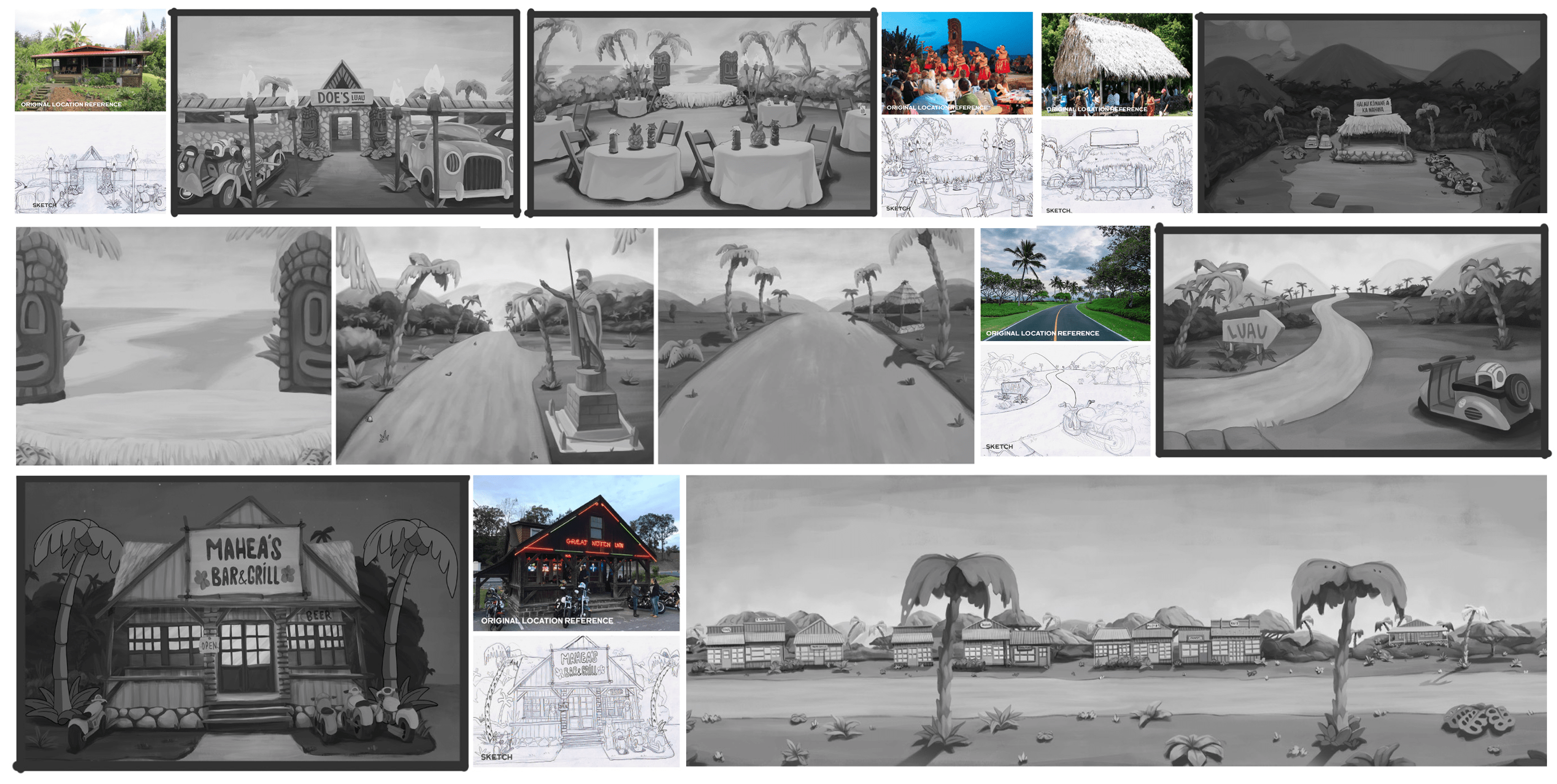 How did you manage to get the hula dance to look so authentic?
The directors’ primary goal in this project was to avoid some of the older cartoons’ tendencies to play to stereotypes. We wanted to make sure we were emphasizing the Hula dance and celebrating Hawaiian culture.

We were fortunate to be able to base our work on traditional routines created by a renowned local choreographer, Patrick Makuakāne, and performed by professional Hawaiian dancer, Kaila DeFries.

We just rotoscoped every single move.

What was the main technical challenge?
In our other animation projects we usually work with an audio track synched to the visual movement; but for this project the process was reversed. The animation cycles and the constant bobbing were one of our biggest challenges since it had to be synchronized with the BPM of the music track. We animate at 12 fps and the BPM of the music was every 10 frames. So, we had to come up with animation cycles every two-to-three frames, so we could catch up with the BPM. In the beginning phase we had to focus on making the “bobbing” of every character look natural and appear in sync with the audio.

Any ingredients to your “secret sauce” you want to reveal?

The backgrounds:
Although the backgrounds were drawn as a watercolor, all the elements that we animated were created using “flat” colors.  You can see this in the palm trees that sway and dance, or the motorcycles at the start of the video, which begin as part of the background until they start to move. You can also see it in the hula-lamp when it turns into an animated object.

The lighting sets
The references that we found for this project pointed to a specific time of day. If it was daytime, there was always a sun in the background. If it was night-time, then you saw the moon and the stars. The grayscale was the same for both times of day.

We couldn’t find any references for what we needed; showing time transitioning from night into daytime. We came up with the idea of a time-lapse, adjusting the grayscale in the background to make it look like a darkening sky. This allowed us to create both a daytime and night-time ambience.

Production notes:
Vascolo is located in Buenos Aires, Argentina, so the Hawaiian culture felt like a real unknown to us. The only real exposure we’d had to Hawaii was via American media sources, and as these were often based on stereotypes, it wasn’t something we could rely on for the music video.

We found it really helpful to have visual references, especially of the locations. We also looked into more intricate details, such as local dances, the tattooing style of the era, tourists’ attire, the musical instruments for the final scene, right down to the way those instruments were played.

It all was part of a process that had the goal of respecting, preserving and disseminating this special culture.

The final scene:
In this scene we had to include 15 different characters using the choreography we’d rotoscoped. The best solution we found to bring it to life was to begin with the least amount of characters possible, then clone and de-phase some of them, to fill out the space in the final scene.

What was the biggest reward in this project?
We made it happen!