The Oscars are over for another year, but, as always, the art lives on. This time, however, we’re not just talking about the movies. 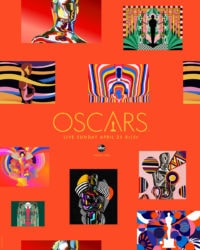 We were so excited to hear that, for their latest campaign, the Academy had asked seven artists from varying creative backgrounds to customize the once untouchable Oscar statuette.

The international artists were asked, “What do movies mean to you?”

They answered in their own creative voices, from illustration to Motion Design and textiles. The outcome was a truly diverse and refreshing take on one of the most iconic symbols in entertainment today.

Such was our intrigue; we wanted to understand what a project like this means to the people involved. We spoke to Petra Eriksson, Karan Singh, and Magnus Voll Mathiassen to get their perspectives on the experience.

So, what better question to start with than what do the movies mean to you?

Movies are a form of escape. I enjoy feeling like I’ve been transported to another world. For me, it’s a great place to find inspiration and get a better understanding of other people’s lives and emotions, as well as getting some perspective of my own.

Can you list some inspiring movies that inform your design perspective and creative thinking?

There are so many to pick from, but here are a few of my favorites that have inspired me in different ways:
Spirited Away: Everything Hayao Miyazaki creates is beautiful, and he tells such interesting stories. Call Me By Your Name: The colors, the music, the setting, and the love story. Iris: The documentary about Iris Apfel, the style icon who reminds us that we don’t need to follow the rules of how we’re “supposed” to live. Tinker Tailor Soldier Spy: Visually far away from my world, but there’s something with the quiet, grey tweed-filled setting and the very well-acted story that fascinates and inspires me. The Favourite: A brilliant movie filled with brutal humor and a magnificent photo.

“It was a little bit tricky to find the right balance in making the statuette recognizable while still doing it in my style, using a lot of graphic shapes and colors. I enjoy working with these kinds of challenges, though.” Petra Eriksson

What was it like being a part of the Oscars?

It’s pretty wild. I discovered digital illustration in high school through a copy of Macromedia Flash. From then onwards, I’d spend my free time making things on the computer in my bedroom and sharing it with online communities for the love of it. It wasn’t really until the end of university that I learned that illustration was a profession and something I could do for a living. It’s been a long, weird journey to this point, and I’m still stoked that this is what I get to do every day. The Oscars are a huge milestone for me, and it makes me appreciate this journey so much more.

Was there a lot of pressure being asked to work on the statuette?

In recent years, I’ve just started working on projects and haven’t really thought too much about who the client is. I think it’s healthier and takes the pressure off, so I can just focus on the process. Usually, the deadline is pretty tight, so there’s already enough pressure as it is.

It was my family and friends that made me aware of how big of a deal working with the Oscars is.

I felt a lot of pressure; not only was it for the Oscars but there were also six other artists in the line-up. All these feelings went away after the first call with the creative team (Ford & Peter) at the Academy. They just wanted to make great work and entrusted the artists they chose with the freedom to create what felt right. I think it’s because they were so trusting and fun to work with that I was able to park the most daunting feelings of the project (the audience, the event, the pressure) and just draw comfortably.

I definitely felt some pressure to deliver something that I would be proud of showing the world. But the brief itself was very inspiring, and I felt like I got a lot of creative freedom, which helped when it came to developing the idea. It was a little bit tricky to find the right balance in making the statuette recognizable while still doing it in my style, using a lot of graphic shapes and colors. I enjoy working with these kinds of challenges, though.

“I think a good film can bring together different people in the same way a good song can, and that’s what I wanted to capture.” Karan Singh

Tell us about the processes and techniques you used for the design.

The brief was to create a visual response to the question: “What do movies mean to you?”

I think a good film can bring together different people in the same way a good song can, and that’s what I wanted to capture. I had the luxury of a few months to work on things, which was really valuable. It gave me the room to experiment and exhaust the initial sketch process. I think I did over 20 initial ideas for the treatments, of which The Academy ended up choosing two ideas to take to finals. My sketches started on paper and were then refined in Adobe Illustrator. Once the roughs were locked in, I developed the final stills and animations in Cinema4D and After Effect.

I started with some small sketches on paper, just testing rough layouts and thinking about how to best visualize my idea. After that, I began developing a few of those ideas in Procreate on my iPad, testing out colors and seeing what direction worked; I then sent these over to the design team. From there, we went on to develop one idea into final art by redrawing it in Illustrator and then piecing it together in Photoshop, where I added some last textures and details.

It was 100% Adobe Illustrator. It is hard to describe the design approach. It was super intuitive and all about exploration. The hard part was how to create something shiny and metallic with, more or less, only block colors. It was trial and error all the way through. Errors became something I worked with and elaborated on; it was a process I learned a lot from.

Did you know the other artists involved? Did you communicate with them?

I was already a fan of a few artists like Petra Eriksson and MVM (Magnus Voll Mathiassen), but I got to make new connections with others like Temi Coker. I think we were all blown away by the opportunity, so it was nice to relate with one another about how wild all of this was.

Yes, most of the artists, but I didn’t have any dialogue with them, and I think that was a good thing for me (and maybe them as well) as I worked in my own bubble without influence. Perhaps I would have approached it differently if we shared ideas.

“In recent years, I’ve just started working on projects and haven’t really thought too much about who the client is. I think it’s healthier and takes the pressure off, so I can just focus on the process. Usually, the deadline is pretty tight, so there’s already enough pressure as it is.” Magnus Voll Mathiassen

How did you find working on this project during COVID?

It was great to get a brief like this during such a crazy year. I wasn’t able to go and see my family in Sweden for the winter holidays, so it was good for me to have a project to focus on. Overall, I’m happy and have been doing fine; I’m feeling very privileged that way. I’m not saying it hasn’t been hard and that living alone during a long lockdown didn’t wear me down but compared to many, I’ve been lucky.

It wasn’t a whole lot different from my usual practice. By the time we started the project (December 2020), restrictions were more or less second nature. Most of my work before COVID was already done over video calls and emails, so I was very fortunate when it came to adapting to work from home.

With so many productions affected this year by COVID, do you feel that social distancing has brought more focus on this kind of work?

I think all types of digital work have been important for the last year, as we’ve probably been glued more to our screens than ever before, and we’ve needed fresh content all the time.

For many companies, it’s been important to work with digital mediums like illustration and graphics because it can be done by one person or very small teams instead of doing photoshoots and filming that often need a big crew.

Born in Stockholm and based in Barcelona, Petra Eriksson took a journey via Dublin and Malta on her way to becoming an illustrator. Her work is littered with eclectic references she picked up along the way. Working predominantly in Adobe Illustrator, Eriksson creates bold imagery awash with big bright colors (as seen in her All about My Mother art for Pedro Almodóvar and Criterion) and anchored with strong compositions.
Instagram: @petraerikssonstudio

When thinking about what movies mean to me, I realized that the most important aspect is that it works as an escape from my reality into a different world. Through that, I get to experience another kind of life for a while, with the colors and the emotions that this different story entails. With my image, I wanted to create the feeling of being in a state where you’re surrounded by notes of this other world, whether that’s a specific visual style, a photo so vivid you can imagine the scent of the scenery or a song that brings out a certain emotion in you by reminding you of a forgotten memory.

I see movies and movie fans as an interconnected being. Movies give experiences on all levels to people, and ordinary people’s lives inspire the industry, which then again brings fantastic and fantastical stories to the screen. This ecosystem of you and me and the film industry—a complex patchwork—is connected on all levels. It is film physiology: an organism where magic flows through its system. It is easy to forget that film art many times comes from our daily lives—it is distilled chaos and complexity, often made to enlighten and bring clarity, and that is what makes it art.

Karan Singh is an artist and illustrator from Sydney, Australia. His distinctive work is a contemporary and playful combination of op-art and mid-century graphic design. Through restricted yet vibrant color palettes and hypnotic patterns, he explores and exploits our perception of depth and movement. His art lives in an eclectic variety of mediums, including prints, animation, video, augmented reality, puzzles, sculpture and clothing. Over his professional career he has worked with the likes of Apple, Louis Vuitton, Herman Miller, The New York Times and Nike.
Instagram: @madebykaran

My explorations were inspired by the ideas of harmony and unity. Although it’s been a tough year for us all to be together, film has helped entertain, distract, console and inspire. The Oscars are a celebration of this art form, casting the spotlight upon the diverse humans that bring these stories to life. My visuals are a celebration of these different walks of life. I’ve explored how we can visualize different elements coming together to create a unified form within and around the form of the iconic statue.

For more information on each artist, you can visit: https://www.oscars.org/news/93rd-oscarsr-campaign-art-revealed