I first became aware of London-based Animade via their iOS game Ready Steady Bang, a twitchy dueler packed with charming animation. They popped up again on my radar last week when they released a quirky short film, “Chronemics.”

Any studio that produces high quality games and short films — and does it on their own time — well, that’s a studio worth getting to know a little more.

How long has Animade been around? And why was it created?

Animade was formed in 2011. Tom Judd and James Chambers had been running Chambers Judd for just over a year and realized that a distinction needed to be made between the animation and web design that they were producing.

Animator Ed Barrett joined them at the end of 2011 and it seemed like the perfect time to split off the animation wing of Chambers Judd and rebrand it as Animade. The name Animade already existed with an online presence as an animation blog, set up and curated by Tom during his time studying animation at the Royal College of Art.

The blog remains to this day and continues to showcase animation that inspires the studio.

How many people work at Animade?

We are 15-strong at the time of writing.

How are you structured? Do you have staff directors or do you function under a more traditional roster/production company model?

The company is made up of five animators, five developers and five project management/communications/administration staff. Our very talented animators — Tom, Ed, Russ, Lana and Milo — all have a flare for design and illustration, each bringing their own unique styles, which meld together in an effortless way to form the house style.

Your service offering includes animation right along side front-end development and Ruby on Rails development. Has it always been that way? How did you evolve to include interactive and technical offerings?

The company has always been a 50/50 mix of animation and interactive design. Until last year, the interactive side of the company went by the name of Hover Studio. We had been waiting for the right moment to bring everything back under one name.

Following a run of jobs that required skill sets from both camps, we took the leap and decided to merge everything under the Animade brand. From day one, we have been steering a large part of our studio’s focus towards the overlap of interaction and animation, resulting in two very popular mobile games: Ready Steady Play and Ready Steady Bang.

This year, we are embarking on a plethora of fun internal projects that will bring our animation and development teams together.

You describe “Chronemics” as “the first whole-team effort to come from our studio.” What does that mean? Why is “whole team” important there?

“Chronemics” came though our doors as a client project to create a series of stings for a televised film festival on Arte. We were given total freedom to come up with a concept and script as well as retain ownership of the final result.

After the design was finalized, each team member was tasked with creating and animating two, 15-second stings. We shared our ideas and progress with each other throughout production in order to keep the rules within the characters’ universe cohesive, making sure there was a unified personality across the individual segments.

Everybody felt a great sense of ownership over the project and as it developed we became excited about the potential to edit the work into one film that we could share with festivals, etc. After the air date, we immediately began work on bringing the stings together.

Retrospectively, it was an unusual way to make a short film, cobbling it together from bite-sized narratives, but with each scene the individual personalities of the Animade team show through. The film would be nothing without the “whole-team effort.”

Where did the idea for the short come from?

The theme of the Arte festival was “The Shortest Day,” and this formed the foundation for our light and dark concept. Knowing we had to create a narrative that would work as 15-second stings brought animations like Warner Bros “Loony Tunes” to mind, in particular Road Runner, with its short, sharp, cat-and-mouse conflicts.

How did the script/story develop? Was that also a collaborative effort?

In a way, the limitations presented by the segmented delivery for Arte dictated the narrative.

We had to deliver two, 60-second sections that would form an intro and outro to the festival and 12 short stings to be played in-between scheduled films. We had no idea what order the stings would be screened, so the overarching story had to be simple enough that the audience would obtain an understanding of the characters and their goals, even if they only saw a few of the vignettes. This lead us to the conflict narrative inspired by the aforementioned Loony Toons.

From there, Ed wrote a loose script introducing the characters and their backstory, as well as a conclusion to the narrative thread. This formed the one minute bookends while the rest of the team wrote and produced the stings that constituted the middle component to the narrative.

What were some of the inspirations for the look of the film?

We wanted to instil a darker, more earthy ambiance into the film, with a look and feel akin to some eastern European animation. We were conscious of how much character animation there was going to be and so adopted a stripped-back, almost cave-drawn style to the characters, which ended up befitting their god-like nature. 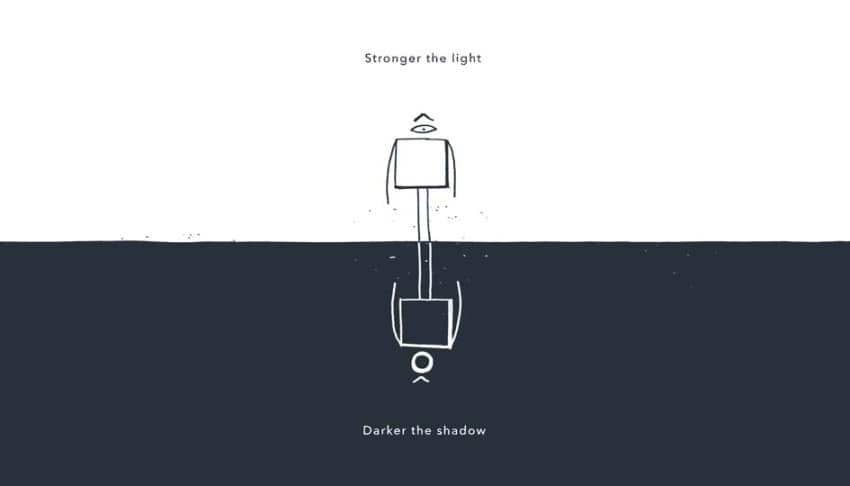 A style frame from “Chronemics”

What was the biggest challenge in completing the film?

Possibly the biggest challenge we had to overcome was editing the vignettes into one flowing film. Initially we overthought the edit by attempting to match spaces and themes to justify one scene following the next. We were stitching shots together to such degree it became disorientating for the viewer moving from one setup to the next while trying to keep it all within a single animated space.

In the end we took a step back and realized less was more — that the simpler, straightforward jump-cuts portrayed the world where these characters waged their conflict much more coherently.

Carving out a niche

In terms of positioning yourselves within the industry, do you have trouble attracting the right kinds of clients? Do you find that clients come to you for a specific thing — say, web design — without realizing everything else you’re capable of?

This happens a lot. Our big focus this year is to rebrand with a focus on educating clients (old and new) about the breadth of work that we do and how it overlaps.

You guys have developed two games, as well as several in-house animation projects and self-initiated interactive projects. How do you find the time to do all that?

The majority of our personal work is developed in downtime in-between commissioned projects. The larger-scale internal projects, however, are scheduled so that they take precedence over anything else. Ready Steady Play, our second Cowboy game, had Tom and Ed blocked out for a number of weeks at a time to ensure the project was completed by our assigned deadline.

Another example is our current project Propz, where we all take turns to create a short two-day animation each week.

Do you have trouble keeping self-initiated projects as high priority tasks when client work comes rolling in?

Yes, it’s an endless juggling act but it keeps us on our toes!

Your commitment to developing your own IP reminds me of a post I read by ustwo, creators of Monument Valley. In the blog post, Brett Macfarlane basically says that by developing IP, ustwo is practicing what it preaches, so to speak.

In trying to get a return on their own investments, they are gaining valuable insights into the challenges their clients face. Does that resonate with you guys at all?

With Ready Steady Play, we definitely gained valuable insights into the process of marketing a product, getting it out to a wider audience and the difficulties that can ensue.

Our first game, Ready Steady Bang, was a much smaller project and although we learned a lot, RSP took the challenge to a new level where we had to consider promotions and publicizing the launch. These insights have helped us evolve as a company and have provided valuable knowledge that we can feed back into our client work. It’s a huge motivation for us.

I feel that in London, there’s less of a divide between design and tech than exists in the States. Do you think that might be true?

I think schools in the UK instill a culture of cross-pollination across disciplines. This pushes through to the creative industry.

From leaving the Royal College of Art, James and Tom knew that they wanted to form a company that brought interaction and animation production together under one roof. The last three years have been about creating strong pillars on either side. Now we have the foundation upon which we can build the cross beam that ties everything together.

If Animade had unlimited funds and time, what dream project would you take on?

Unlimited time and funds is quite an open brief! I guess we’d want it to do something that’d fully utilize both sides of the company: a characterful project that spans interactive and animation on a grand scale — some sort of game or installation perhaps.

Either that or something to do with speedboats and a sunny location!