At the end of 2015, we invited you to participate in a casual hardware survey, and 854 of you clicked your way through it. Here are the results. 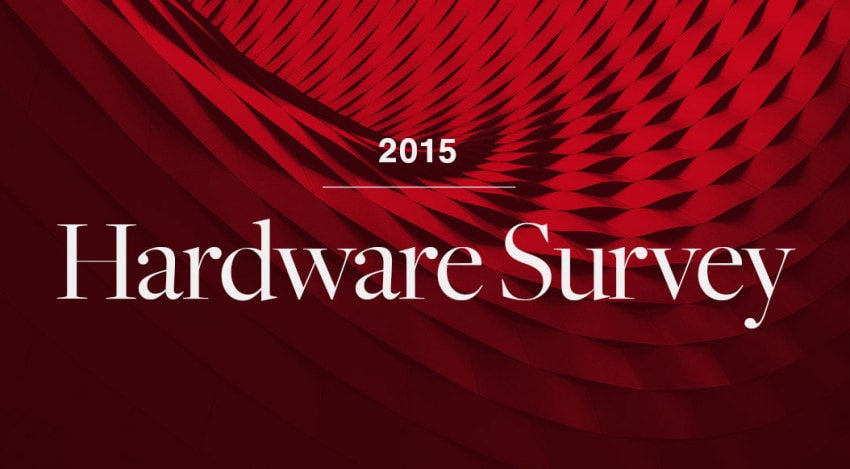 Note: For questions that allowed multiple answers, the total percentages may exceed 100%.

Over half of the respondents were freelancers or self-employed.

When you’re self-employed, investing in gear means digging money out of your own pocket. With 52% of respondents working for themselves, that’s a lot of tax write-offs.

12% of users reported using both Windows and OS X on a daily basis. Even with hybrid users factored in, Linux accounts for just over 2% of usage.

Software lines up pretty much as you’d expect.

No surprises here for motion designers. It’ll be interesting to track this year over year to see which packages gain/lose market share.

Most people spend less than $4k USD on workstations.

5 years is the maximum lifespan of most people’s workstations.

With OS X and Windows upgrades now free, one of the major reasons for desktop upgrades has faded. But demanding users will always want to stay ahead of the performance curve. We likely won’t see much change in this data for the next few years.

Nvidia leads in graphics cards, but the market is highly fractured.

Perhaps because this question allowed for write-in responses (and a lack of naming conventions), there was a bewildering array of answers here. At the risk of oversimplifying the results, we tried to make sense of the data by combining cards into product groups.

GPU-Accelerated features in Adobe’s Creative Suite matter for 1 out of 3 respondents.

The high number of people considering Adobe’s GPU-accelerated features when making their graphics card purchase might be due to popular confusion about which features in After Effects actually take advantage of GPU acceleration.

For After Effects CS6 (11.0) and After Effects CC (12.0, 12.1, 12.2), CUDA-based acceleration (available on certain Nvidia cards) only improves 3D raytracing. Other features — and most plugins — rely on OpenGL (not CUDA) and so are supported by nearly all modern graphics cards. (Read more.)

VRay leads in non-native 3D rendering — but Octane’s not far behind.

As Octane and other renderers improve support for Cinema4D, it’ll be interesting to see what happens in this space over the next few years. There’s more competition than ever.

In the world beyond mice, Wacom still reigns supreme.

509 respondents weighed in on alternative input devices, with Wacom’s (pricey) Cintiq line of products accounting for a surprising 36% of responses.