Don’t you feel cool just by watching Ariel Costa’s reel?  His work is so darned confident in its swagger.  How does he do it? Where did it come from?  How does he keep it going? 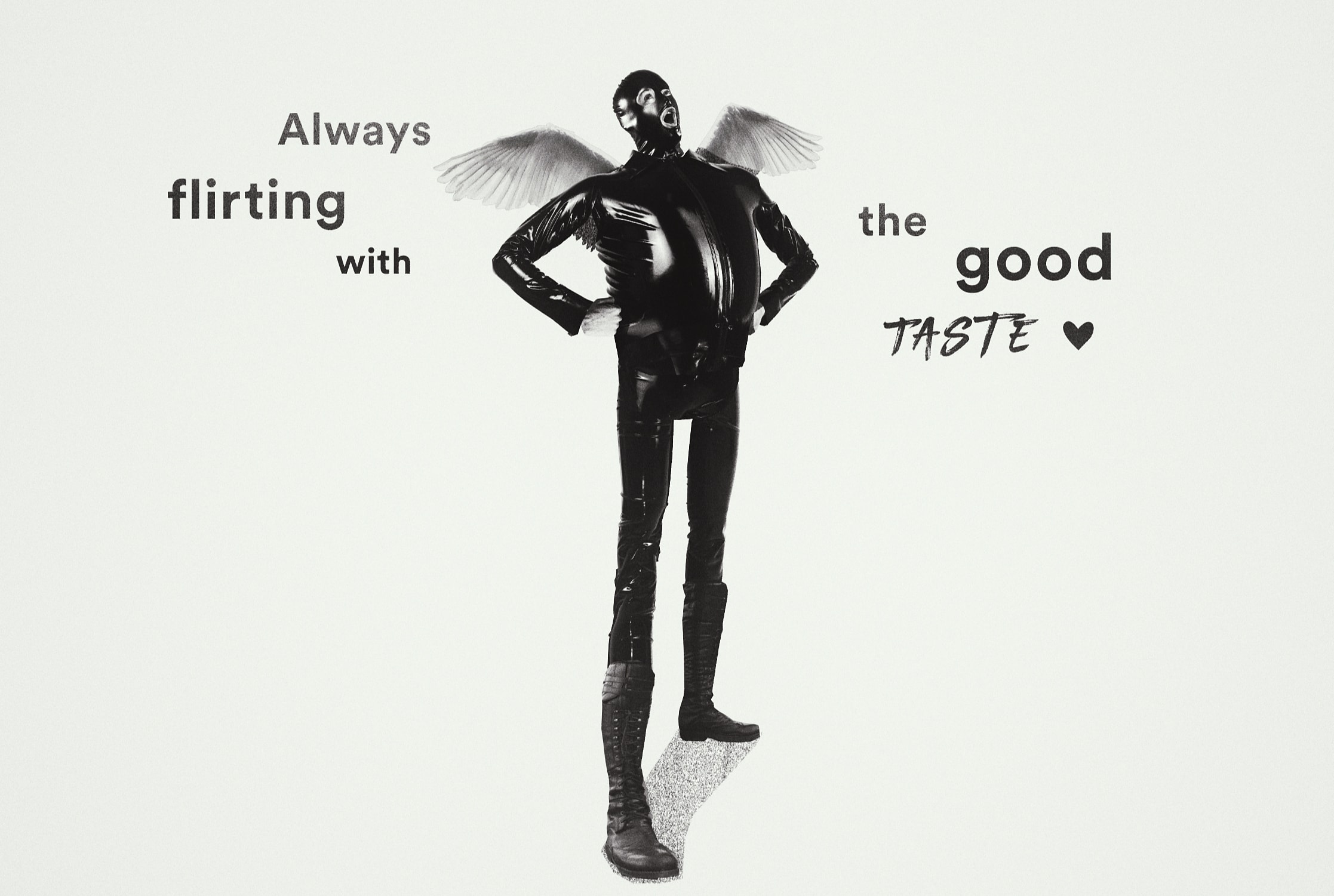 Ariel Costa and I first spoke pre-COVID-19 about his striking new website and the inspirations behind it.  We had a lovely conversation about work experiences, life in California, traffic woes, kids, all the usual meet-n-greet things.

Ariel’s journey to get him where he is now goes something like this:

Ariel was born and raised in Sau Paulo, Brazil.  He was mesmerized by the glow of TV and movies and always had a sketch-book by his side.  With limited educational resources in Sao Paulo to become a live-action director, he decided on media arts for his studies.

Ariel got an internship at a publishing house where his role was to research images and fix bad drawings for children’s books.  This is where he first met Photoshop.  Learning this skill led him to a job at his university’s New Media and Art Department where he was tasked with animating segments for the college TV station.  He completely fell in love with this “new software” where he could integrate his drawings with collage and animate them into cool little things.

This is when he discovered the work of Terry Gilliam and Saul Bass – his forever inspirations. 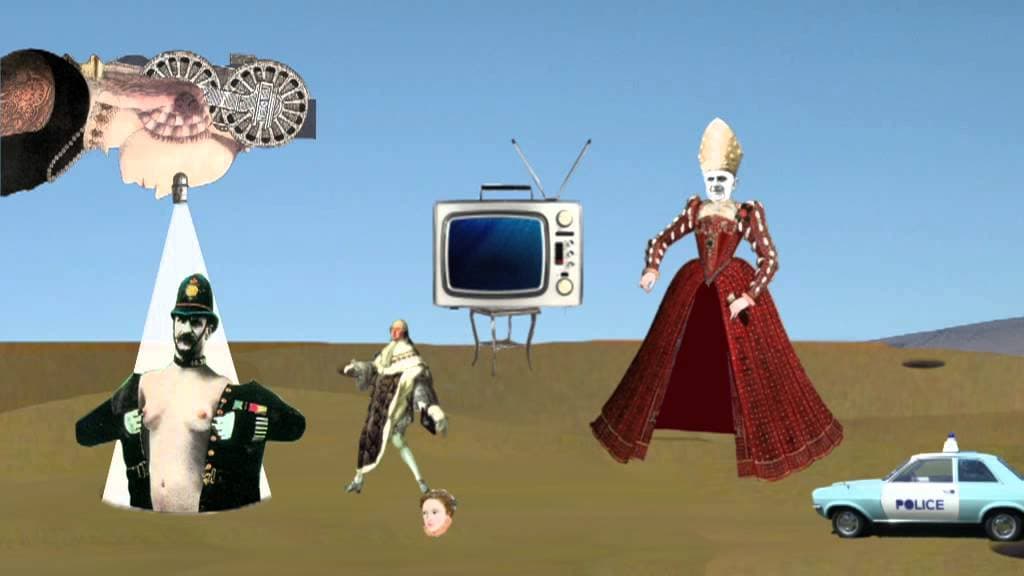 There were two legendary studios in Brazil that set the standard for what we now know as motion design — Lobo and Nakd (led by Nando Costa at the time).  Ariel practiced and mimicked what he saw.

As Ariel was developing his own voice and unique techniques, he found work at various studios around Brazil, gaining insights into how to make this art-form a viable business.   Along with a partner he decided to open his own studio called Nitro. There’s nothing like experience to teach one how to successfully manage people, solve problems, and generate business.  After four years, it was time for Ariel to hand-off the business side and concentrate on his personal craft.

Ariel set off for The States, worked at Roger and then got a job offer at the once little-known studio called Buck.  His world cracked wide open and he created among amazing leaders, collaborated with amazing co-workers,  and made amazing work.  But still, that inner-voice called him to strike out on his own.

Now Ariel really had to set his work apart from what he was making at the studios.  He wanted to get back to young Ariel who makes weird stuff full of stop-motion, cut-outs, analog, and all the explorations in between! So he made a short film called SINS.  This was his breakthrough moment as an independent artist.

Remember his awesome video he made with Greenday?  And he worked with rock legends Led Zepplin!

Ariel was off and running on his own, and this is where a whole new round of life lessons came into play:  overcoming The Imposter Syndrome.  The confidence needed to maintain an independent practice took time to develop.  Ariel went through phases of emulating what was being made by others and ignored his strengths.  He grappled with cell-animation, 3-D, and various hyped-up styles. Ariel’s gut instincts told him this is not who he is.  He listened and made the bold declaration on his about page, “I’m not the guy for: 3D lens flare shine Sports Package, High-End 3D and Transformers VFX guy. (Although I love everything in this list, I think I’d play a better role by just watching).”

By embracing his failures, and pursuing what brings him joy, Ariel Costa fully became “Blink My Brain”.  The imperfections are what define his style:  knee joints that don’t perfectly align or rough edges on rotoscoped photographs, etc.  This is what makes his work human, and therefore not only relatable, but inspiring. 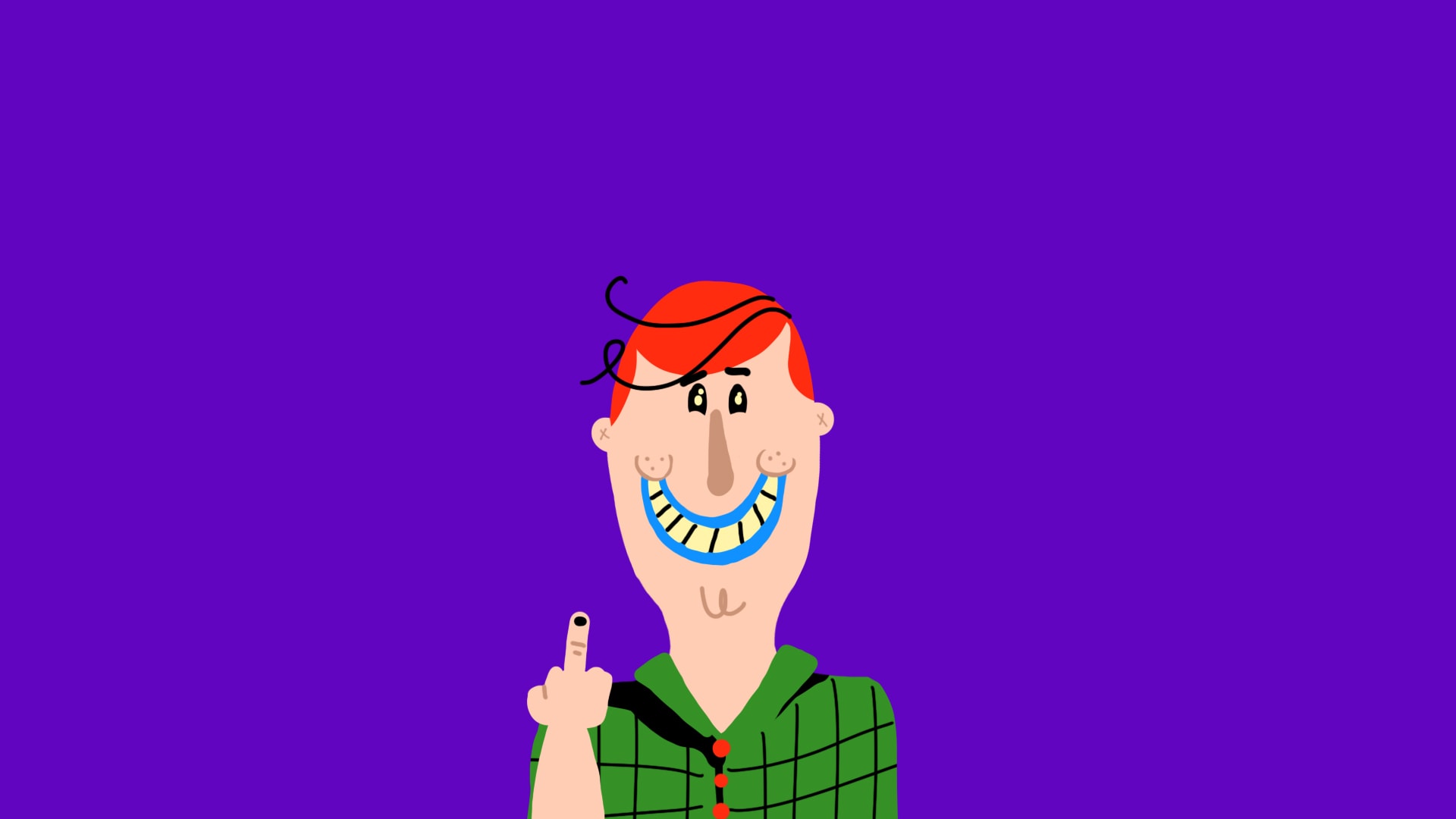 An idea that didn’t make the final cut

As I was putting together this article, I had a few other questions for Ariel and reached out to learn:

Ariel Costa was on vacation with his family in his homeland of Brazil.  With a few loose-ends dangling, Ariel had the foresight to bring along his iMac so he could soon relax without looming pressures whispering in his ear.  Then the global pandemic of COVID-19 hit.  Little did he know that the small side-table at his parent’s house was about to become his improvised creative headquarters for the next few weeks.  This seasoned “home-office” freelancer was going to have to get used to working in a less-than-ideal work environment.

With his Dad sitting next to him spouting the latest breaking news headlines at full-blast, 2 kids running rampant, Ariel continued to make outstanding work amid chaos.  But the borders were rumored to be closing.  Ariel needed to get home. 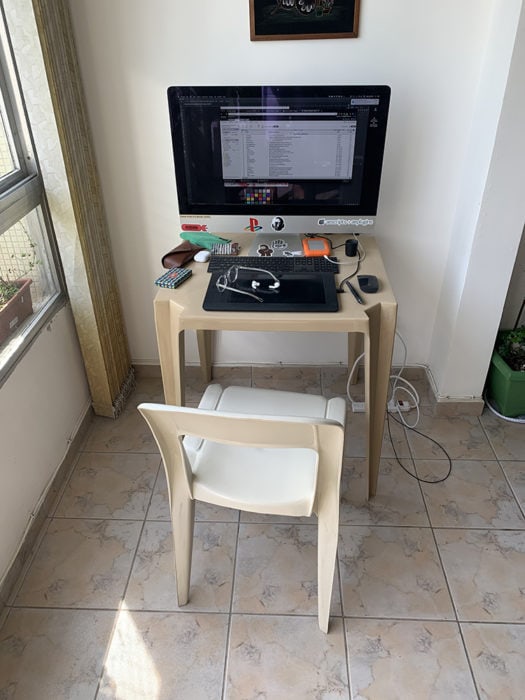 The grit that is signature in Ariel’s work culminated in real life when he managed to get his wife and two kids on the last flight from Brazil back to his home in California.  He said the journey was nothing short of a cinematic nightmare, where he had to persuade authorities to let his family on the plane, like in the last scene in the Ben Affleck flick Argo.  Everyone is now safe at home, learning to navigate the new normal.

So, I thought in these unusual times, who better to ask for some tips and tricks for working remotely than the great mind behind Blink My Brain?!

How are you all doing in these strange times? Has work slowed up? Down? Stayed the same?
Work-wise I’ve been busy, which is good. Clients are keeping the animation ball rolling, thankfully.

Is it challenging to concentrate?
I have 2 kids, so concentration in these quarantine times can be challenging, but I am used to it. I put my headphones on and crank up the volume. The good thing is that I have ADD (Attention Deficit Disorder) and can’t focus on several things at the same time.  So, when I’m focused on work, I blank on everything else. My curse is my superpower! Haha!

As someone who works remotely, what tips do you have for newbies?
The most important tip is to be responsible. Many clients don’t understand or don’t know how to work remotely.  They feel like the project can only succeed when everybody is working closely under the same roof as a way to keep the “control”.  So, it is up to you to make them feel safe.

I always hire people from all over the world who also work remotely. And even though we are physically apart, we can put our brains together through technology.   Creativity is about experimentation and does not follow a linear line.

What tips do you have for keeping remote workers from around the world on the same page?
Use the technology. I use Slack for daily communication, Zoom for calls, Frame.io for postings and reviews, Google for calendars, and Milanote to share references.

What are you streaming, listening to, playing or watching?
I’ve been listening to some old-school rock like Led Zeppelin, Black Sabbath, and AC/DC.  I just finished watching The Outsider on HBO and Kidding.  I highly recommend both.

Can you give some general do’s and don’ts for successfully working remotely?

DO:
Reply to client emails and Slacks.
Keep to the schedules. Deliver the steps on time, ALWAYS!
Be organized.
Put on some pants, you’re not in vacay mode.
Keep the client informed.
Go take a walk, go to the beach, do whatever, but again…. deliver on time!
Make the client trust you!

DO NOT:
Be a ghost.
Make the client wonder where the hell you are.  The client has other tasks than worrying about you.
Bring problems to the client, you are there to solve problems.
Ignore emails and slack.
Wait to do it at the last minute.

Then head over to Motionographer’s Instagram where he gave break-downs for a few projects.