The prolific film director Ridley Scott is notorious for slowly building a mood that settles into your bones, immersing you in the scene regardless of how fictional the storyline is. The opening title sequence for HBO Max’s Raised By Wolves follows in this design.

The opening credit’s trajectory begins with hypnotizing VHS tracking lines that flash us into a monochromatic, exploding outer-space and finish with a single light-flare shooting into planet Earth. The painterly gestures give the sequence that human, handmade, and relatable touch, while the glitches mark the unknowns of technology.  The environments are violent yet peaceful as the viewer feels at one with the ascending body floating in at the 0:36 mark.  When the title Raised By Wolves slowly dissolves in over a barren planet, you are inside this world, compelled to discover the origins of this post-apocalyptic universe because it is now yours.

Motionographer is ecstatic to talk to title sequence director Steve Small of Studio AKA to dissect the process of making the Raised By Wolves titles and share what it was like working with the legendary Ridley Scott.

Can you describe the brief for Raised by Wolves?

We were asked to create a title sequence for the show with imagery of a future Earth so devastated by wars, that it compelled humanity to find a new home. 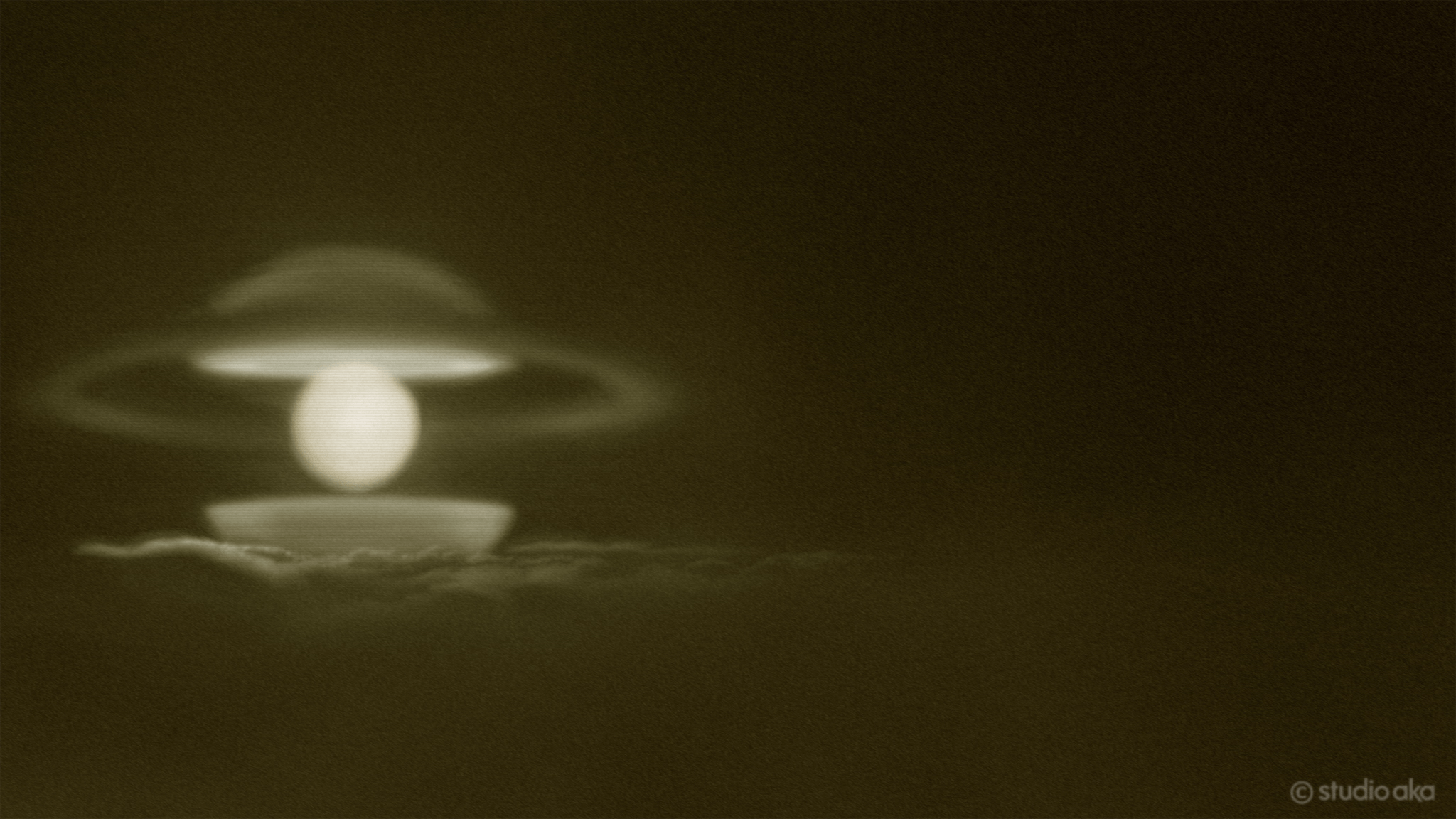 What is the inspiration behind the project?

Ridley had seen some previous work of ours which experimented with a number of painterly techniques that drew upon 2d animation, cgi and live-action reference and sent us a brief.

After reading Aaron Guzikowski’s extraordinary scripts, and seeing some of Ridley’s early cuts, I wanted to portray the world it had created and emphasize the themes of conflict between human nature and technology as seen perhaps through a corroded lens. Some of the things that sprung to mind were those early photogravures that represented the beginning of photography. Back then, this cutting edge process resulted in these fragile images that could have been photos or paintings and looked like they might flicker away into nothing at any moment.

I had these in mind as I began making the first digital paintings and found a way to create dark landscapes that had a similar quality and seemed to fit into the broken world envisioned in the show. 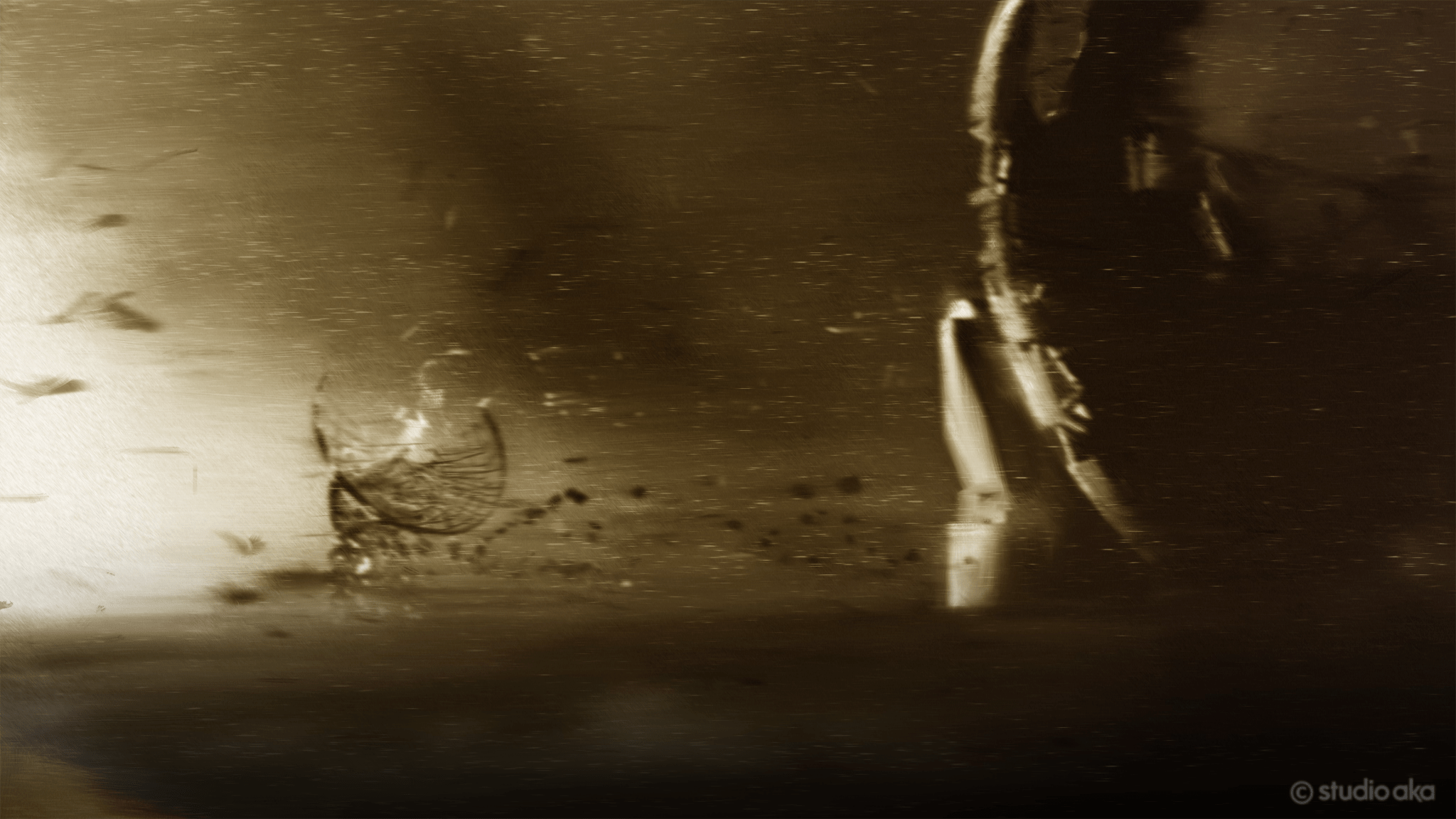 How long did the project take?

We spent a month or so laying out our approach with pitches and refinements and once we got the go ahead we worked intensively for about two and a half months. After that we made small additions and tweaks in short bursts.

Can you describe the process and can you share any behind the scenes?

Originally we were briefed for a pitch and several directors at StudioAKA offered their take. My route was selected and we met Ridley in his office in Soho. He discussed his first impressions as he looked through the digital painted styleframes and immediately began sketching some boards with an HB pencil on paper.  A week later we met up again to show new styleframes based on the boards and once we had selected the final images and shared more ideas, I went away and roughed out some more boards, breaking down the movement and timing. Over the next week or two he’d sketch over my roughs and email them to me to show any new thoughts he’d had.

Once we had the final styleframes and the motion boards approved, I got together with the crew at AKA and broke down each scene to figure out the most interesting way to animate it.

In most cases, styleframes tend to visualise a feel rather than the final look, prior to all the work that eventually sharpens the final piece. The final look can be quite different. In this case, however, the style frames were the final look, which meant that all the glitches and paint strokes stayed in.

The making of Raised by Wolves title sequence

What programs did you use?

We choreographed the explosions in Animate in hand-drawn, frame-by-frame animation and artworked them in AfterFX and Photoshop. The one-piece of figure work was animated in Photoshop. Everything else was designed and painted in Photoshop with reference created in Animate, After Fx, Maya and Houdini. We were keen to create a different look, which often meant creating a starting point in a more unexpected program.

Can you talk about the sound aspect to the project?  What was that collaboration like?

We had presented some ideas for sound at pitch stage, largely to create the mood. It was instrumental, interposed with broken signals and transmission sound effects. Ridley liked this, but there were concerns that everything was too bleak. There is a strong core of hope running through Aaron’s scripts and our visuals were coming in a little dark.  We had been animating for a week or two and had some final scenes to look at. It was then that we received a vocal piece that the Composer Ben Frost had created with the rich, soulful voice of Mariam Wallentin. It was completely unexpected and lent a startling element of hope and longing to the bleak visuals we had become immersed in. 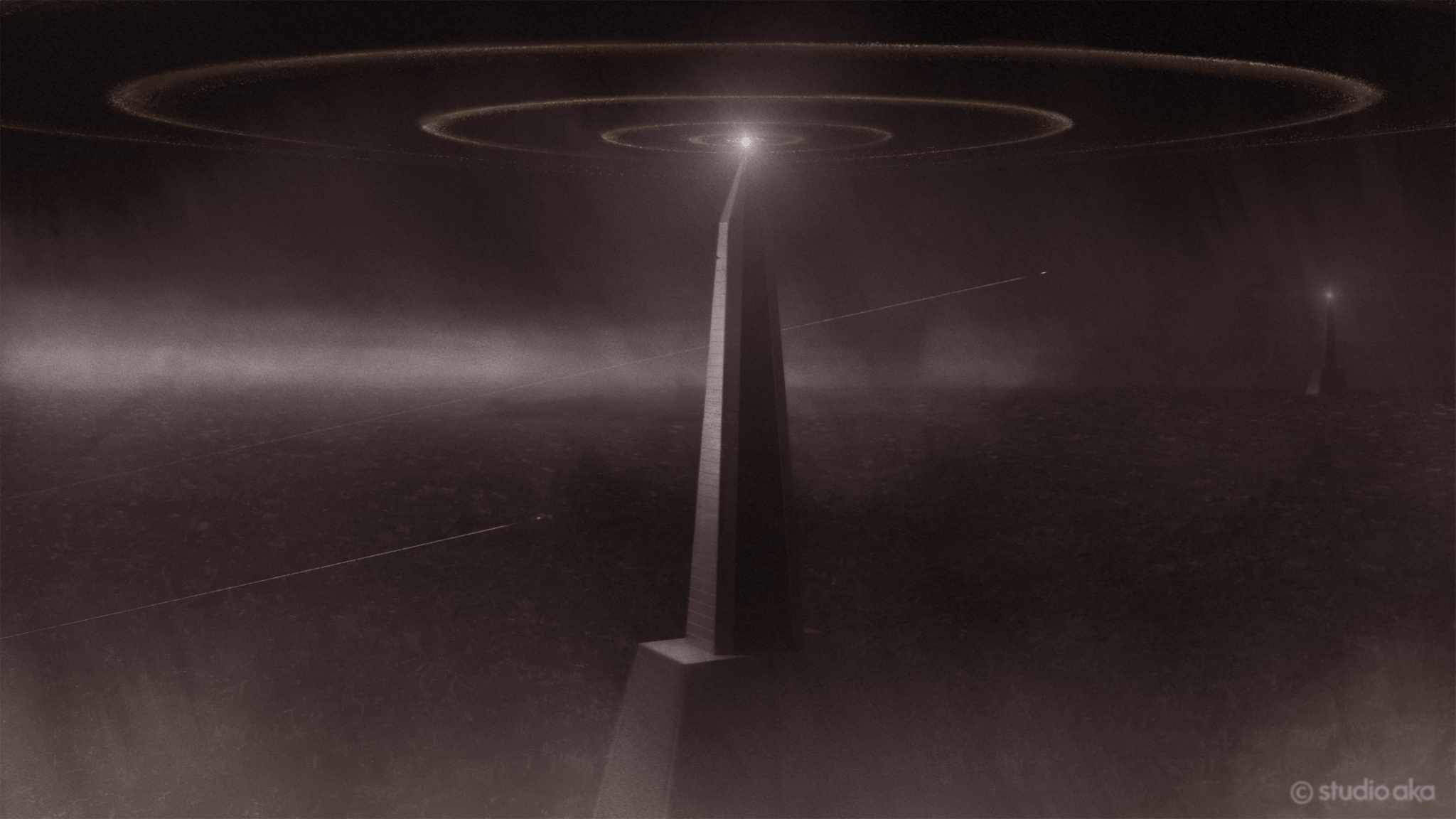 What was the hardest part of making this project?

The hardest part was also the best part. Once we’d brought all the animation in and began painting, each frame was a full canvas that needed effectively reimagining and re-painting. Every frame. There was no corner of any single frame that wasn’t painted.

That’s no disrespect to the animators and builders that had gotten the scene that far. We all worked hard to make sure that as many of the main animating elements that we needed were in place, to enter into the painting phase. But the final look and feel only comes from the hand-painted touch. There was plenty of animation that was layered on in painting too.

And we worked up to the wire. Up until the closing hours of our schedule, I was painting and animating a ship’s re-entry into real space through a portal from scratch and I had forty minutes to do it in.

It was pretty intense.

What is your favorite moment in the making of the project?

When I was 14, two grown-up looking school friends of mine told me they’d just seen Alien. The next weekend I tried to see it but wasn’t allowed in. It was an 18 certificate. Given that when I was 18 years old, I spent almost a week’s pay on a vhs of Blade Runner which had just come out, and I watched the video over and over until it got a crease in the tape. I knew this was going to be an unusual experience.

Ridley is an ideas machine who draws with emphatic clear lines and thinks like a painter. I think the stand out moment was meeting him for the first time in his Soho Office. In the room next door there was David’s suit from Prometheus and Mark Watney’s suit from The Martian and Maximus’s helmet from Gladiator (all designed by the amazing Janty Yates who worked on Raised by Wolves too.)

Ridley sat down and looked at the styleframes and we discussed them for a while. He then grabbed a pencil (they have them as giveaways there, really good ones with decent erasers on the end) and started to sketch saying ‘ Now we start telling a story’. 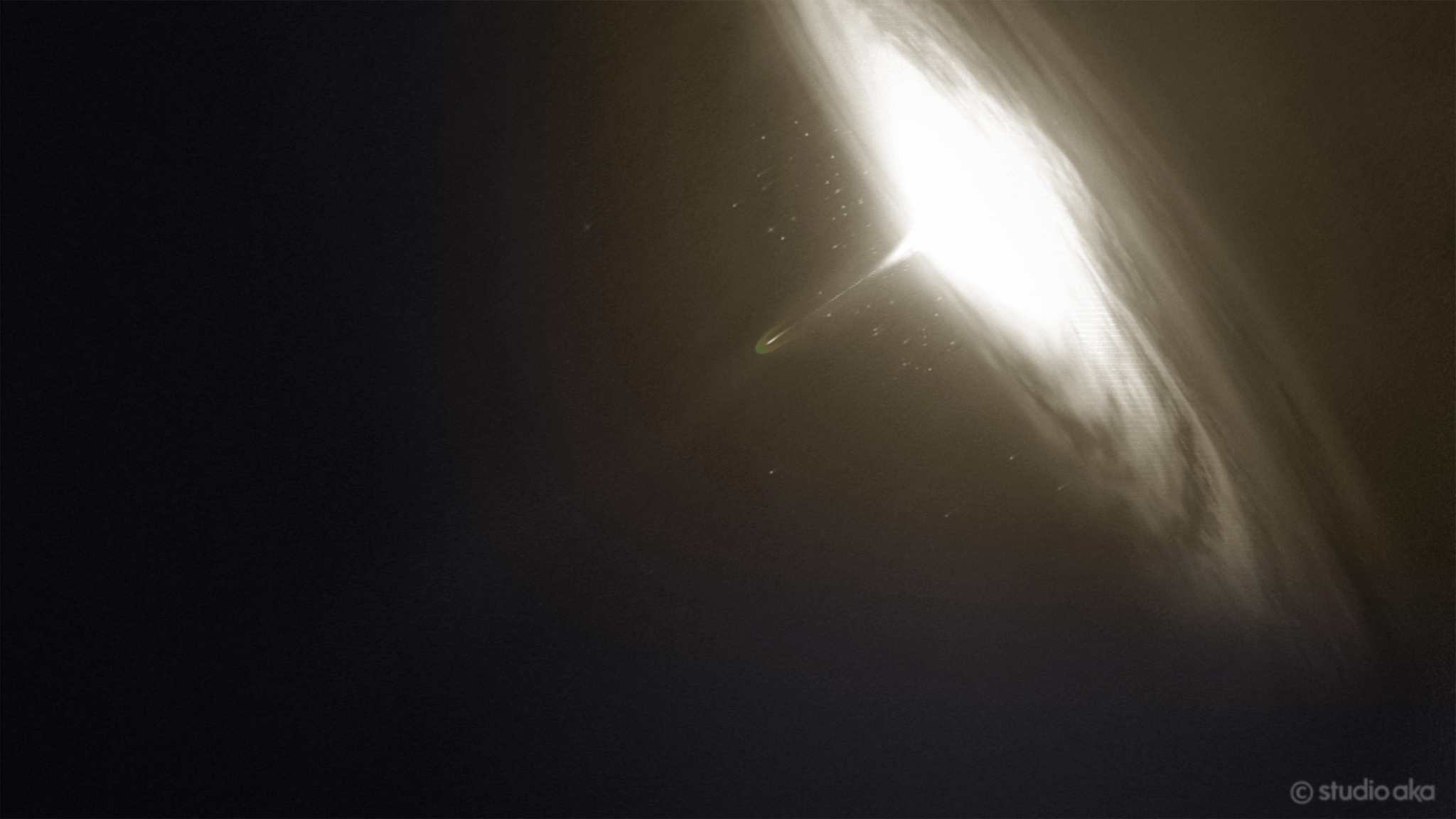