Give us a brief introduction to yourself

Tom: I grew up in Bend, OR – a place with a few more trees than where we are currently based in Culver City, CA. Julian and I met back in college and started our studio, Frame 48, following graduation. My background is in directing and visual effects. Today my days are shared between business operations, animation work with our team, and directing through our production arm, Summercamp.

Julian: When I first met Tom in college, I was cutting for reality television. I ditched all that to start the company, and we’ve been operating ever since. I’m one of three EPs at Frame 48, with Tom Teller and Seth Josephson. I produce, manage our post teams, and handle client relations for all commercials and music video work, but we all wear many hats. Tom and I have never stopped taking out the trash, and we’re all great at forgetting to water our office plants.

Tom: As most of us did, I started experimenting with motion and animation when I was a teenager. I filmed a lot of action sports (skiing, biking, etc.) growing up, which came with the desire to learn visual effects and motion graphics. I naturally migrated towards using animation and motion as a primary medium for creative exploration.

Julian: I have a background in editing, so I wasn’t fully exposed to motion design until we started the company. Over the past five years, I’ve been able to learn enough through working with Tom and other talented CG folk to produce and manage animated pieces, but I’ve never taken the driver’s seat myself. I’m really lucky to be surrounded by incredible artists on a daily basis.

Tom: I took on the brunt of the animation and visual effects. Julian handled a lot of the creative conceptualization and edit.

Julian: For over five years now, we’ve been working with sound designer Gerry Vazquez and colorist Bryan Smaller on nearly every client project. It’s been a while since we’ve been able to take a break and dip into a personal project together. We’re very lucky that they were available to collaborate with us on this. With our go-to casting director, Stephanie Kerbis, we were able to find Daz Crawford, who brought such a powerful reading to the renowned poem. “Do Not Stand at My Grave and Weep” was written by Mary Elizabeth Frye, who was an incredible poet (and, from what we hear, an incredible florist).

Tom: Jisei is an experimental short film that follows the recollection of one’s memories as they experience death. It was something we had wanted to make for a while. For better or for worse, we’re both fascinated with death; I’ve had a few close brushes with it between a pretty bad motorcycle crash and a plane landing gear failure. For me, this film was an effort to express some thoughts and feelings that crossed my mind in those moments.

Julian: After countless hours discussing the topic, we finally landed on the premise that the choices we make every single day of our lives compound on themselves, resulting in our impact on the world after we’re gone. It’s all connected, the places you’ve lived, the people you’ve met, the ideas you’ve had – and in Jisei, we chose to connect them quite literally with an astronaut’s tether.

Tom: With quarantine ahead of us, we felt it was great timing to explore this concept in a short film. We worked on the film sporadically for several months following the initial Covid shutdown. We started with Miro, an online whiteboard application, where we wrote down all of our initial concepts and ideas, pulled references from other pieces and drew mock-up scenes. We spent quite a bit of time iterating on the core concept and the message we were trying to send. After the narrative structure, we moved on to look-dev and animation. All of the CG was done in 3DS Max and rendered with V-Ray on GPU. For compositing, we used After Effects and Nuke.

Julian: We both have backgrounds in Photoshop and relied heavily on it during the initial concept stages. I would mock-up a frame and express my motivation behind the composition, and he would do the same. Before we began previs, I would be working with these boards in Adobe Premiere and automating some test animation that Tom would take much further in 3DS Max.

Tom: My favorite was the initial creative process and then early R&D / look development. Really quickly, we were able to capture visuals that were accurate representations of the abstract concepts we were discussing. Playing with loose concepts such as “places you’ve lived” or “adolescence” and then visualizing them with an infinite city or a kite shattering a mirror of self-reflection proved to be an enjoyable challenge. It was rewarding to quickly iterate on such wild ideas, which was enabled by the speed of our hardware and just the two of us riffing back and forth.

Julian: This was a really cleansing experience for me to step away from the producing seat and direct for once. Tom and I have a very similar taste in everything creative, from movies to general design, so our conceptualization process was pretty seamless. We would get out of the office and dive into conversations about our feelings on life and existence. At the beginning of quarantine, we both had a lot on our minds. With the unknown timeline of the pandemic and many of our projects on hold, this felt like the perfect release. It was truly therapeutic.

Tom: We struggled for a bit, wondering if anyone would understand the film and if we needed to slide in more exposition or easter eggs to drive the point home. We went back and forth on this for a while before deciding to keep the message as we perceived it and make the film for ourselves. After all, this piece was based on some of our core beliefs, and we chose to create something that stayed true to those initial conversations.

Do you have any advice for creatives on how to pursue their dream projects?

Tom: Make a baby iteration of your dream project, or at least components of it, especially if your dream project relies on other people (a client, resources, a team, etc.). Getting people to trust you and trusting yourself to execute that dream project is half the battle. Get some of that out of the way by proving the individual elements on your own terms.

Julian: Each stage of the creative process is its own game. Break it down, then start winning each of those stages individually instead of viewing the project as one entire battle. Don’t be afraid to share early iterations of a concept with other colleagues.

Tom: The industry is changing at such a rapid rate with efficiency, communication, and creative being king. Some of our favorite projects have been collaborations with other studios and artists where we can have an honest back and forth and create something truly unique. Keeping this communication open and sharing between teams and studios is something we would love to continue seeing and being a part of.

What would be your message to the industry for 2021?

Tom: With so much work being remote over the past year and a lot of time at home, it’s easy to get in your own head and start questioning your art and purpose. Put mental health first, explore other creative mediums, read a book, go outside, diversify your time – and it will pay dividends in your art and at work.

Julian: The pandemic has given us a lot of time to compare ourselves to others in all areas of the creative world. It’s easy to hop on Instagram and see an incredible artist producing incredible art. This comparison issue is far too common among creatives, and it’s healthy to remind yourself that these feelings and fears are entirely made up in your head. Everyone is going through their own hardships, and all of us artists are in this together – to learn from and inspire one another.

Julian: Jisei is very surreal and experimental, so we don’t expect many people to resonate or understand every detail we’ve tried to convey in the piece. We just hope that it inspires the viewer in some way to continue making their own memories – because the future is really just the impact of what everyone has scheduled in their calendar tomorrow or decides to do on a whim today. 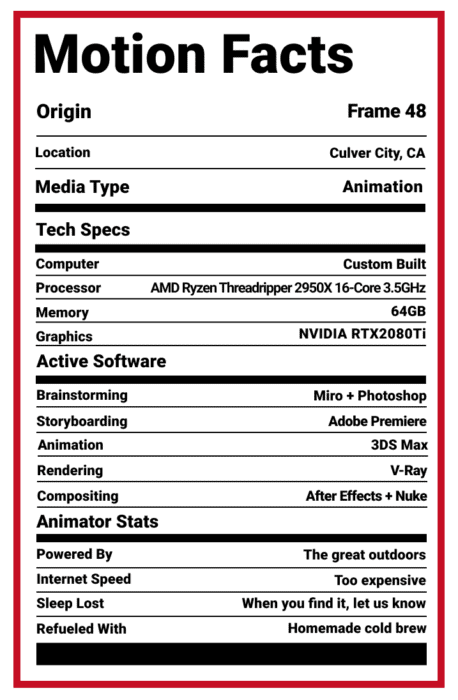