Toronto-based Tendril relaunched their web presence today, joining the growing number of nimble, mid-sized shops repositioning themselves in response to the hand-writing on the wall:

Broadcast isn’t dead, but the more reliable — and often more interesting — work is increasingly found in other places.

As a 5 year old studio with roots stretching back 10 years, Tendril is an interesting case study in change. In our chat with them, they share their perspective on the current business climate and how they’re attracting new opportunities. We also touch on the important of staying small and what it’s like to run a studio in Toronto.

How would you describe the landscape for broadcast motion design work right now?

It’s a rocky and volcanic landscape. Put on some good boots and start running in the other direction!

Jokes aside, it’s changing rapidly. We have been steadily seeing less and less traditional broadcast motion design work over the past couple years and the few big ticket items are fought over so fiercely they are a gamble to engage in.

That said, there is much work out there, it’s just doesn’t seem to want to be on TV as much anymore.

I’ve been writing a lot about motion shops finding new ways to incorporate interactive offerings into their core business. With Tendril’s relaunch, it seems you guys are repositioning yourselves with interactive (among other things) at your core.

You’re careful to eschew the word “interactive,” though, opting instead for “art, story and experience.” What does that mean for you on a practical level?

We are very excited to be exploring new avenues for creation and creating stories, but won’t lose sight of our roots. We really want people to know our approach to every job will be from the point of view of a designer.

Art comes first at Tendril. We are not a crew of coders here, but we appreciate the art of code. We believe people will have a more enjoyable experience with the end product when everything that goes into it is made with a special aesthetic in mind.

We have learned over the course of recent interactive projects that there are a select few who are real code artists who can let us push the envelope creatively while still maintaining the integrity of the experience. Those are the people we love to work with and continue to seek out.

We have been lucky enough to surround ourselves with a crazy talented collection of collaborators in the world. Working with them and filtered through the Tendril lens we feel we can make great projects, no matter what they may be!

Working for the hardest client: yourself

Let’s talk about your new visual identity system for a moment. At the heart of it are the Tendril Emojis, right? How do they function and where did the idea for those come from?

At the beginning of 2014, we put the brakes on production for a solid week and a half. We sat together during this time to discuss and reflect on the year that had passed and look not just to the year ahead but the next two or five years.

What emerged from this period of introspection was a renewed sense of purpose and direction as a group. It also had the positive side effect of providing a solid reason for rebranding the studio. (We say “re-branding,” but this was the first time we had found the time to formally brand the studio.) 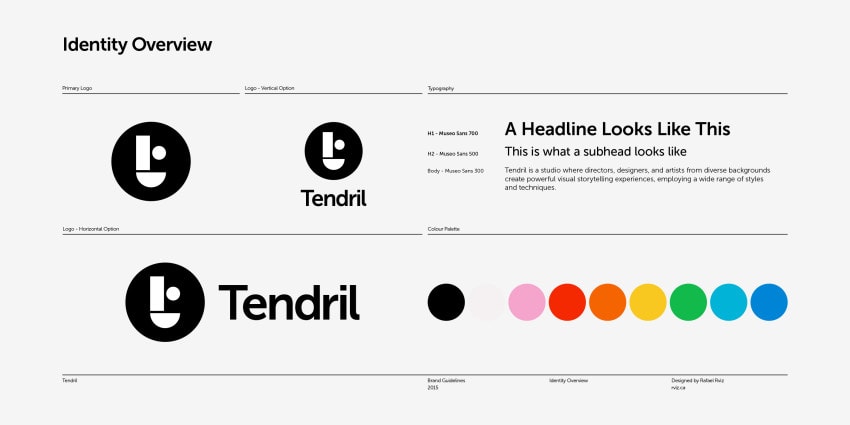 A collection of elements from the newly minted Tendril brand guidelines

We had the great good fortune of becoming acquainted with the incredibly talented young local designer named Rafael Rviz who immediately understood what we needed. We asked him to say a couple words about the origin of the Emoji’s:

The Tendril Emojis came out of the idea of having elements in the brand that were modular, to represent diversity. Whether it’s the diversity of the team members or the diversity in the work Tendril does. At the heart of the emojis is the communication of fun and playfulness, key concepts in representing the Tendril brand.

As for function, the emojis’ main function is to heighten the experience the viewer has with the logo, by creating a human connection with the simple, clean shapes that form the Tendril logo.

The sound design for the emojis is fantastic. What was the process behind that?

The process was incredibly hands-off. The Emoji’s motion were brought to life by the guys at Tendril RIO: Gabriel Rocha, Rodrigo Rezende, and Guilherme Twardowski.

We then gave them John Black (a dear old collaborator) with names corresponding to each of the emotions. John is always incredibly generous with his time and these were wonderful simple opportunities for him to bust out his modular synth array and various other studio toys. His studio is a giant sound toy box (for those who have never had the pleasure of visiting).

With the sound design I just went with my gut. I really just wanted to have fun with these and not overthink, so I let either the graphic style or emoji mood serve as a jumping off point, and I completed them in one sitting. I also tried to make sure they all had a distinct style, and would flow well when looped.

I think when many people think about “getting into interactive” they think it means designing and building websites and apps. There’s nothing wrong with that thinking, but it’s rather limited. What are some of the other ways studios can branch out of the world of the :30 TVC?

We see websites and apps as a new delivery mechanism for our art. We really loved the opportunity to work with Coors on their interactive music video, which we produced completely from production and design/animation to web development.

Our crew are avid gamers. We love the idea of expanding on clients projects to turn them in to something that may make sense for a game. We already have a couple of these on the go now.

We have a process shorthand after the Heart of the Arctic HTML5 project, and we completely understand the language of gaming.

More than diving head first in to the generic world of “interactive,” we are looking for cool projects that present opportunities for invention or play. We’ve now travelled to Europe to pitch a job using the Oculus Rift as a way for clients to better experience our visuals.

And we are working on a passion project that is a short film for VR that will be available for Google Cardboard. I think this is just a natural extension of what we were doing before and that allows our amazing team to keep their synapses firing on all cylinders. Everyone is totally into learning and experimenting.

How many people work at Tendril right now?

We just did a head count and net in around 20-21 including our small office in Rio de Janeiro. We just “became one” with our former sister companies Relish (editing) and 567 (online and finishing), and if you add them to the mix Tendril is now somehow a group of 35+! How did that happen?

How important is Tendril’s relatively small size to you guys being able to reposition/reinvent yourselves?

Very important. We are still small enough to operate as a tight-knit and highly communicative group.

There are no investors or people dictating the course of our actions. That frees us up to follow our gut and be nimble in making big decisions. The core of Tendril started with Chris Bahry, Alex Torres, Vini Nasciemento, and Leo Mateus and our EP Kate Bate.

We have never had a plan to grow and have never sought out growth for growth’s sake, but have just let things naturally take their course. We feel fortunate to have magnetized to each other from half way across the world to our home base in Toronto.

What are the ups and downs of being your size? Is there such a thing as a “perfect size”?

The biggest advantage of being our size is being able to maintain a very informal studio culture. We really get to spend time with each other and with every single member of the team on a personal level.

It has many challenges, though. You are a little too big to subside on just the really small projects, but you are not big enough to take on the super massive ones.

It is actually quite easy to be very financially secure with a small studio of 4-8 people, but at that scale, it’s hard to push the quality of the work beyond a certain level. On the other end, past 60-70 people, you are likely working with large budgets and possibly long-format work that is subsidized by the government. The whole zone in the middle is very complex and challenging to navigate.

Another advantage of being smallish is there are no walls or a door separating us Creative Directors or our EP from the rest of the team.

Tell us a little about running a studio in Toronto. I love that city. What it’s like from a business perspective?

Despite the extremely low temperatures in the winter, we all love Toronto, too.

In the gaming department, we’ve been seeing a lot of activity here, both in the Indie realm with shops like the brilliant Capybara games, as well as the triple-A end. We’ve had the great privilege of collaborating with Ubisoft Toronto on a couple of secret projects that we really hope to be able to share in coming year.

Canada represents one third of all the work we do, so i guess, our work is somewhat evenly distributed across the markets in which we are represented.

Are you competing against US/European shops for work?

With regards to competition, times are tougher than ever these days — in Canada and all over the world. We are constantly competing for work against US and European shops and very often on Canadian work.

We work very hard to remain relevant and to always put our best foot forward in a pitch. We’re not sure how Toronto or Canada is perceived in the world! We are competing against crazy good studios, and so we are always kept on our toes.

The local market is no less competitive, though there are fewer studios like us here… so maybe that’s a good thing? In Toronto, I think we are still seen as newbies against the established shops. We try to take advantage of this by being uber flexible and nimble to work with.

Of course none of this would be possible without the amazing support we have from our reps in the US via Blacklist, Passion Pictures in the UK, Hesty Reps in Canada and the most recent addition in Germany via Optix Hamburg.

What’s in the pipeline for you guys? What are you working on?

Just adding the final touches to a beautiful network package for the Space Channel. We are a bunch of sc-fi geeks here and are thrilled to be working on them.

We are also working on our very first non-web based game project! We can’t say much yet, but this new game will be available on iOS and Android. With this project, we hope that we are moving one step closer to developing our own game IP in the years ahead.

In addition to that, we are always pitching…. always….