Editor’s note: This animation features cartoon-style nudity and sex, and therefore might be NSFW for some office environments.

As any experienced animator will tell you, character animation ain’t easy.

I’ve seen countless motion designers dip their toes in the deep, deep waters of character animation only to discover that it’s easier to drown than swim.

So rather than hit the full, harrowing reality of character animation head on, Andrew Vucko backed into it. His latest short, “Raccoon Thing,” is the result of his attempt to learn more about character rigging in After Effects — which turned into a surreal rabbit hole of discovery and narrative development.

Your general process for this is pretty interesting. You described it as going in “reverse,” starting with experimentation and then piecing together the narrative. Tell us a little more about that.

The entire creative process was backwards. At the end of last year, I came across a presentation by Jussi Kemppainen on his rigs for Angry Birds Toons. It blew me away. I wanted to play around with the concept, so I gave myself a day to build an extremely crude rig from the ground up. The initial result ended up being a stupid looking cat… and it danced.

I continued to output different animations, because I wanted to see how far the rig could be pushed. I ended up with over 20 random scenes, and I thought, “Well..… now what?”

I guess this is where the “narrative” came in. It was like putting together a puzzle. I lined up all the scenes and started filling in the gaps as a script, making editorial decisions before I even had elements to put in. The whole arrangement was in a constant state of change; it was built as a visual progression of insanity rather than the intentional structuring of a story.

What was really important about this whole experience was not allowing the fear of starting to enter until you realize, “Oh wow I am actually halfway through… maybe this could be something?”

Everyone waits for that romantic moment to start a project, but sometimes you need to just go with it and see where it takes you. It’s also meaningful to finish whatever that thing is. It could be some stupid-ass nonsense, but ultimately you have that pride of ownership and completion. 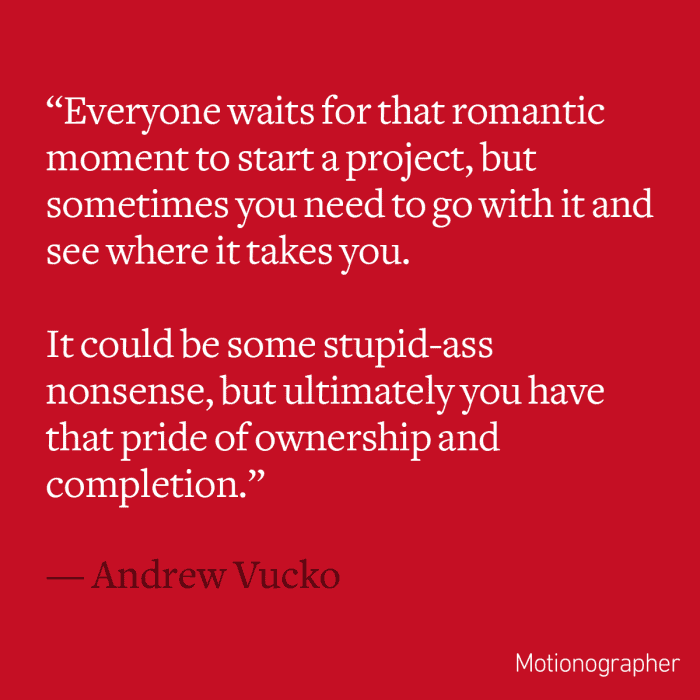 I wish I had a better answer! I didn’t want to do cats, and raccoons are pretty anarchic — which pretty much fit the bill for this. Plus, there is a bit of war going on with raccoons in Toronto right now.

That little raccoon character is incredibly expressive, despite his lack of a body. Was there a character design phase? How did you arrive at the decision to use just circles to represent forepaws?

The character was designed as I built the rig. I only gave myself one day, so it had to be simplistic. Also, I had an initial idea of just recreating movie scenes with these characters, so as a base, I didn’t want it being too complex. The first scene I designed was a take on the movie, Back to the Future.

“The first scene I designed was a take on ‘Back to the Future.'”

There were a couple key decisions I made in order to keep things clean. For example, avoiding limbs and using circle paws instead ended up being a blessing. Since this was my first real attempt at working with any sort of characters, it was important that certain elements were kept simple so I could spend more time on nature of the shots. 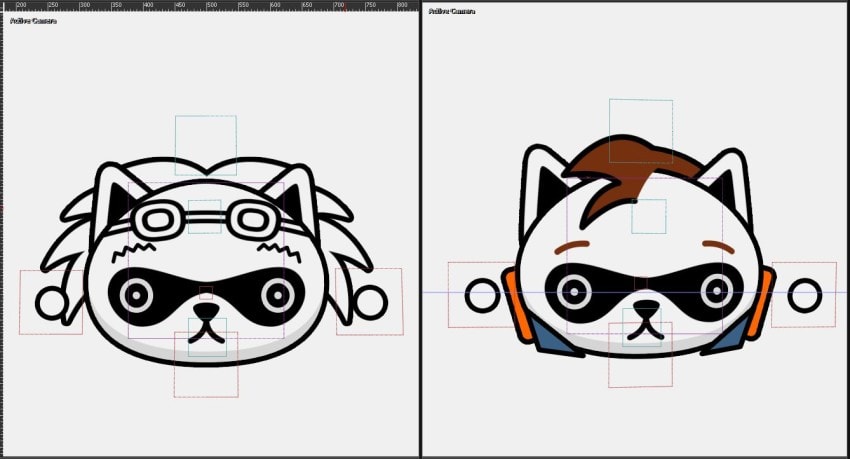 “There were a couple key decisions I made in order to keep things clean. For example, avoiding limbs and using circle paws instead ended up being a blessing.”

At what point did the music get involved? (And where is the music from?)

The song is “Your Love” by Totally Enormous Extinct Dinosaurs. This song appeared via playlist sooooo many times as I was experimenting with the rig. I guess a lot of that spirit found its way into the final product, and so it only felt natural to include it while building the edit.

At the end, Jeff Moberg did a nice job on the sound design and the final mix. It helped tie it all together.

What were some of the technical challenges you dealt with as you pushed further into rigging in AE?

The technical challenges I dealt with were minimal compared to the learning curve I went through with animating the characters. The rig was built so quick and dirty that limitations were only discovered when I was too deep into the project.

There were a lot of cheats used to deal with intersection and overlapping masks. It was a project file I wouldn’t wish on my worst enemy.

“There were a lot of cheats used to deal with intersection and overlapping masks. It was a project file I wouldn’t wish on my worst enemy.”

In terms of the coding and scripting, it was actually very basic, as a lot of the animation was done by hand.
There were a couple of expression links for the look-at constraint, which proved a bit trickier.

The elements of the face were all broken up into different segments. By doing this, you could offset them, giving the illusion of a 3D character. I also realized that the simpler the shading of the character, the more forgiving it was.

Are you hoping to do more character work in AE? Or did this scratch the itch for a while?

This project provided me with the opportunity to start building a new skillset. This has just scratched the surface. The focus and dedication required of character animation… it’s crazy. I would totally be up for exploring more avenues.

What else are you working on or what’s coming up next for you?

I just finished a rebrand and a small title sequence which should be out in the summer, I am also hoping to experiment with some puppetry in the near future!