Editor’s note: What better way to start 2017 than with a new article in our Guest Post series by none other than Giant Ant?

I remember when Giant Ant first started popping up in the Vimeo feed. At first, the general consensus was “who are these guys?” that was quickly followed by “damn, they’re good!”.

There was a six-month stint where seemingly every month they were releasing yet another stellar piece of animation. It was a whirlwind of great work and, in the end, they had established themselves as one of the industry’s best in the realm of design-driven animation.

Better yet, they did so predominantly on their own terms and have been steadily paving their own way since. Giant Ant is proof that a better way may be possible.

Please enjoy this article by the founders of Giant Ant, Jay and Leah, as they take us through some of the lessons they’ve learned throughout the years and what it is that makes Giant Ant so special. 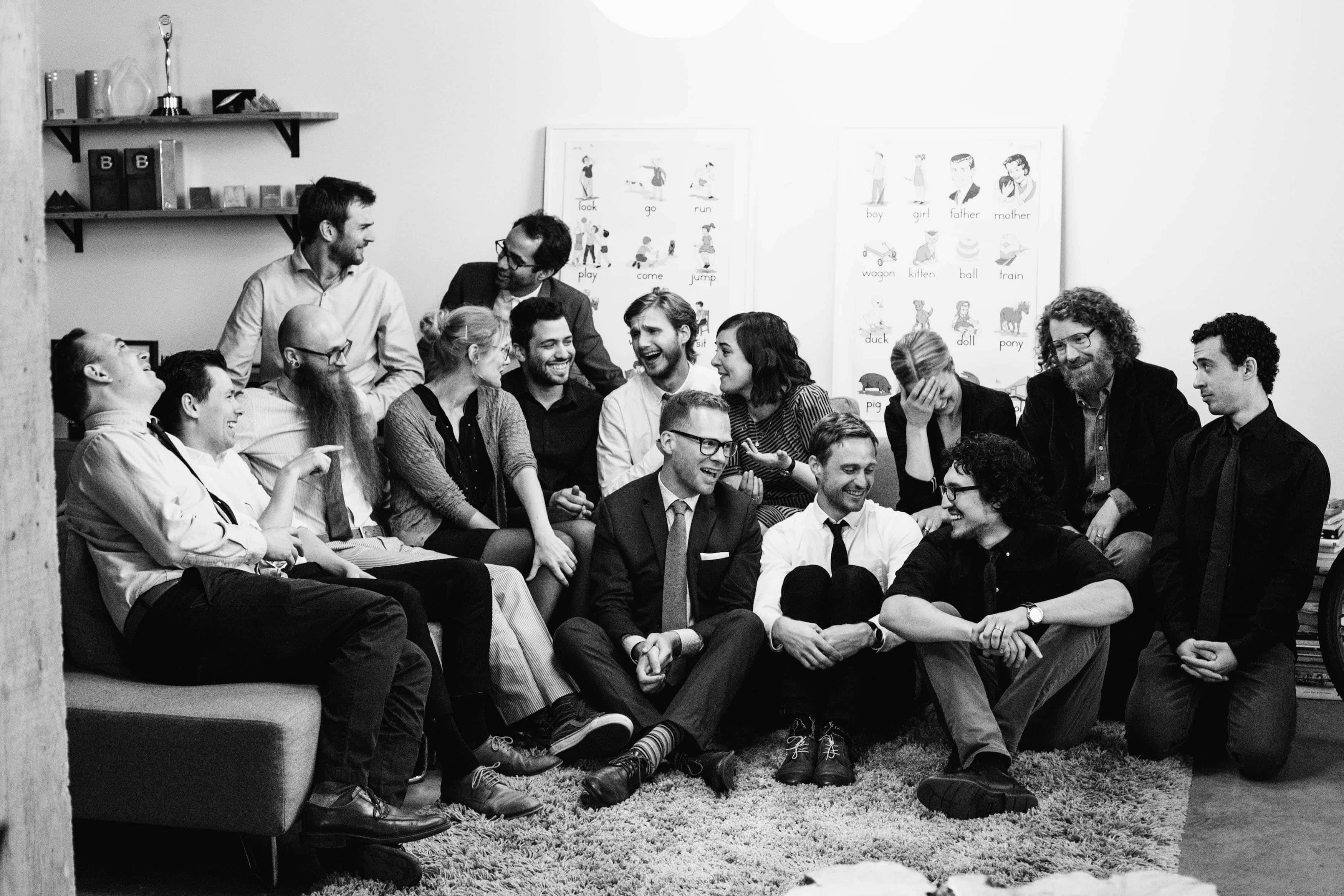 Ten years ago today, I stood, completely nude, in Leah’s parents’ upstairs bathroom as she fumbled with a pop-can sized Sony DV camera, trying to frame me up. Then we switched; I filmed her. We cut it together and, voila, we’d made a video. Our first video.

The video in question was a silly, borrowed joke about how men and women shower differently. It was, and still is, a terrible video, but we didn’t expect anyone to see it. So, we put it online. What happened next was the weirdest, most improbable, but definitely most terminally embarrassing thing that has ever happened to us:

Today, sitting in a coffee shop ten years later, on our creative anniversary and at the time of the year when one reflects on things, I’m thinking back on the second-most improbable thing that has ever happened to us: that a terrible video turned into a successful studio—one we had no business starting, but one where we can work with an amazing group of people every day, on our own terms, in a way that doesn’t compromise our values.

What motivated us to make that video in 2006 isn’t part of our mantra now, but the embarrassment we felt when it went viral taught us a lesson which would became our foundation for the next ten years:

What we’ve realized in the ten years since is that “taste” goes beyond aesthetic preference; it also has to do with how we choose to live our lives and the things we decide are important. In retrospect, a fortunate series of decisions—all branching from that realization—accumulated to make Giant Ant.

Here are some of our favorite learnings between that December 23rd, and this past one:

Of course, this means putting an importance on quality of the work; it should never be less than our best. If we have to ask ourselves if something is good enough, it probably isn’t. But it also has a lot to do with what that work is about.

When we started we pretty much only got asked to make fart jokes, starring ourselves. We quickly realized that clients will call you for what they’ve seen you do. Creative potential is too abstract for most clients to see. What is it anyway? The gap between what you can do, and what you think is exceptional? Some measurement of your speed of improvement? Raw talent multiplied by work habits over an extended period of time? That all sounds like math, and what’s important is that fart jokes will only ever attract people who want fart jokes.

Although Leah and I have a fondness for a good fart joke, it wasn’t the kind of work we wanted to be doing, and we had no interest in being “cewebrities”. So we made a decision to only make the kind of work we wanted to get called for. Blessed with a lack of technical skills that prevented us from being pigeon-holed, we tried to make the type of content that was interesting to us. We dabbled in stop-motion, we shot a hip-hop documentary in Tanzania, and we started to make videos that didn’t star us. Most importantly, we promised ourselves that we would do our absolute best not to divide our work into “creative jobs” and “money jobs” and that, if we stuck to our guns, eventually they would become one in the same.

10 years later, we still live by this, and it has been our sole marketing strategy.

We are the company we keep

One night, 8 years ago, we sat under hot lights for hours as we ate about a dozen Egg McMuffins in stop motion. Up until that moment, we’d been too intoxicated by the idea of working for a big brand (and on a fun project) to stop and wonder if we believed in what we were making and ultimately, selling. When we did, we realized that our views were in direct opposition to the brand we were serving. And it made us wonder what it said about us personally.

As humans in the world, the people we surround ourselves with says a lot about who we are. Why would we view our studio any differently?

We often say that to do good work, we need to be able to see the world in the same way as our clients, even if we have to squint a little bit. And so we assess every new project like this, in order:

We do better work when we all believe in it

As two people with the same values, these were easy decisions to make. But, as the studio has grown into the diverse group of artists and producers who now define who we are as much as we do, we feel a responsibility to respect their values, too.

3 years ago a project came in that had a bigger budget than we had ever seen. It was a pro-choice campaign.

We decided that it was a better family decision to say no. We do better work when we all believe in it, and we’re a better studio when we’re all proud of what it produces.

The road to brilliance is paved with terrible ideas, and Leah and I pride ourselves on having the worst ideas around. But, often, they’re a stepping stone to something much smarter from someone else—if we’re the smartest people in the room, we’re in the wrong room.

We’re not communists; the studio has a hierarchy that helps us function as a business. But when it comes to ideas, we do truly expect everyone to contribute and for the best ideas to rise to the top, no matter whose they are. This means creating a safe space for mediocre ideas, and seeing them as a necessary step toward something valuable. It also means creating a space where people are exposed enough to the process that they can step into responsibility, and rewarding creative bravery with creative freedom.

When we started making videos we just weren’t very good at it. As luck would have it, this forced us not to pass off style as substance. As we’ve learned the tools, and built the team, we’ve tried to hang on to this. The honest truth is there there is a glut of very beautiful, flawlessly-made content out there that leaves us feeling nothing because it’s missing a core idea. Or maybe because all of the eggs are in the motion design basket, leaving too-little thought to context, story, script, voice, pacing, sound design and music—all elements that we would argue are as important in creating an emotional response as the styleframes and transitions that get the applause.

Of course, we’re eager to make something beautiful, but our aspiration is that style has purpose—or serves as an onramp to content that’s otherwise resonant.

Our creative energy has value

It’s our most precious resource.

With that said, most of us know that pitching [for free] is the standard method of procuring work in our industry. We see a lot of grey in this issue, but we know this for sure: Pitching says that creativity and artistry are commodities. We also know that for our industry to survive, this can’t be true.

If we, as the creative community—meaning agencies, studios, freelancers, etc—think that we are providing value, we need to act like what we do has value. When we don’t place value in the work of those we rely on to succeed, we end up with mediocre work. Not always, but often enough.

Having a strong point of view about where to use our creative energy has helped us to move toward a majority client-direct project base and to ensure that, when we work with agency partners, we’re able to enter a project from a place of excitement and mutual respect that will yield the best work.

There’s a fallacy in our industry that working hard and working long hours are the same things—that late nights and weekends are what it takes to be successful.

This is hard, but we’ve slowly learned that this has more to do with poor planning and poor communication than about the state of our industry. Deadlines are what they are. Resourcing is complicated when unexpected things happen, and they always do. Sometimes a shot just needs a little bit of extra something. Or sometimes we get it wrong on the first try…

But, no matter what, life is more important. We didn’t understand this until we had kids. When I think of my twenties, I index years against projects, not life experiences. That’s not a good thing.

Today in the studio, encroaching on personal lives is not fair game. We resource from 9am to 6pm, Monday to Friday. If we can’t get it done in those windows, we find more hands. If those hands can’t do it, then we say no. We will try our hardest 100% of the time, we’ll hit our deadline every time, but if we find ourselves at the office at 9pm, we’ve failed, and we use it as a chance to learn something to help us make a better decision next time.

So here I am, sitting in this coffee shop ten years later, and just now starting to feel like we’ve learned who we want to be in this crazy industry. But it’s taken making 1000 videos, and making 1000 mistakes, and surrounding ourselves with a brilliant team to learn from.

It’s hard to know what the next ten years will bring, or what the next “shower video” will be to send us on another crazy journey. But, until then, we’re excited to keep learning. And to keep trying to make work that gets ever closer to reaching that unattainable taste. There might even be a fart joke or two.